After dropping a very tough Friday game by a score of 1-0, the Aggies bounced back with a walk-off win on Saturday and a comfortable shutout on Sunday to take the series from Sacramento State.

Unlike last weekend, Aggie Baseball didn't get the weekend started on the right foot this time out against Sacramento State. The Hornets came to Olsen Field and played sound, fundamental baseball and took a 1-0 victory from Texas A&M on Friday, the first loss for the Aggies in 2014. It was really one of those "That's how baseball go" type of games, as Sacramento State played a great game and A&M just couldn't quite string together enough hits and made a few mistakes defensively.

The Ags deserve credit for not hanging their heads, though, as they rebounded to take the series 2 games to 1. Sacramento State may not be a great team, but they were a solid ballclub that didn't beat themselves and made A&M earn every part of that series win. There are some things that can be improved on, to be sure, and a few lingering concerns that hopefully won't linger much longer, but making sure that this series was a win and not a loss was certainly paramount. Here's how each of the 3 games went down.

The weekend got off to a shaky start for the Aggies as they failed to score a run for the first time this season. Daniel Mengden had a solid start, going 7 innings allowing just 3 hits and 2 walks to go along with 9 strikeouts. The only run of the game was unearned and came in the 4th inning, with Sacramento State getting their leadoff runner on base thanks to an error by SS Patrick McLendon (his 2nd of the game). That runner would come around to score on a 2-out hit by Hornets' CF David Del Grande. Mengden allowed just 1 baserunner in the next 3 innings, and Andrew Vinson worked 2 scoreless innings in relief without allowing a single baserunner.

Unfortunately, Mengden got the tough-luck loss due to A&M's inability to string together enough hits to produce any runs. The leadoff runner reached base in 3 of 7 innings against Hornets' starter Ty Nichols, but the Aggies were never able to move a runner past 2nd base all night. DH Hunter Melton managed to go 2-4 on the evening and C Troy Stein went 2-3, but only 2 other Aggies had hits. Sacramento State pitchers only recorded 2 strikeouts on the night and the Aggies made a fair amount of good contact, they just were hitting it at people. It was a frustrating loss, to be sure, but it was admittedly a bit different from some of last season's early losses in that we weren't striking out 10 times in a game and failing to make any decent contact. 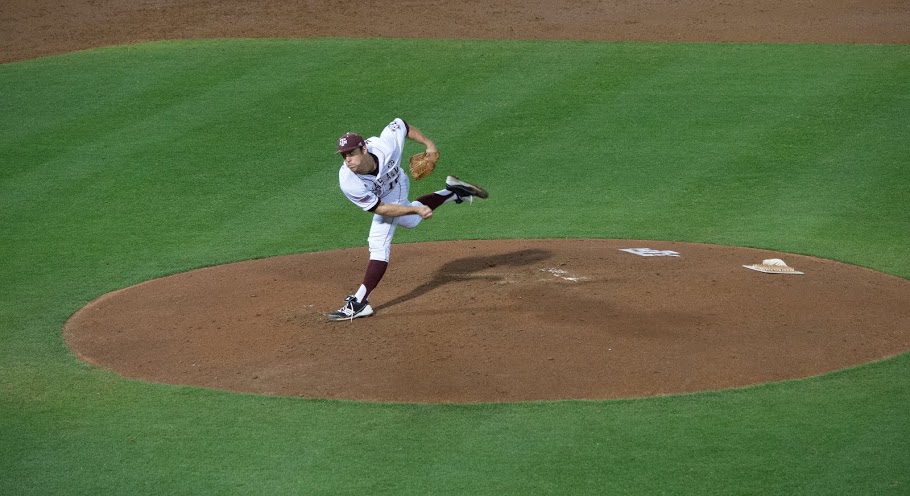 The Aggies rebounded from Friday's disappointing loss nicely on Saturday, but it turned out to be much more of a nail-biter than it probably should have been. A&M jumped on Sacramento State early, putting up 2 runs in the 1st inning against starter Brennan Leitao. Cole Lankford came through with a bases-loaded double that scored 2 runs, with Melton getting gunned down at the plate. Lankford's hit was actually the only one for the Aggies in the 1st, with Leitao handing out 4 walks in the inning.

The next 5 innings would go by without either team plating a run. The Hornets threatened against Parker Ray in the 2nd, loading the bases with 3 singles with just 1 out. Ray did a tremendous job of working out of that jam, though, by picking off the runner at 2nd base and then getting the next batter to fly out. Parker settled down more after that, allowing just 1 hit through the next 4 innings. The Aggies, meanwhile, had at least one runner on base in each of the 2nd through 6th innings but were unable to bring anyone home.

The Hornets tied things up in the 7th, getting 2 runners on with 2 outs and forcing Coach Childress to bring AJ Minter in to pitch for Parker Ray. Minter walked the first batter he faced - after going up 0-2, no less - and then allowed a 2-run single that evened things up. Give a lot of credit to A&M for responding back immediately in the bottom half of the inning, with Blake Allemand driving home Jace Statum and then Logan Nottebrok going yard with a 2-run blast. Andrew Vinson worked a clean 8th inning, and I think most Aggies felt comfortable with Jester coming in to pitch with a 5-2 lead in the 9th. Jester allowed a leadoff double - which advanced to 3rd on a wild pitch - and, after a strikeout, a sacrifice fly which cut the A&M lead to 5-3. With 2 outs, Jester then walked 2 consecutive batters and gave up another double which would bring home both runs and tie the game.

Fortunately, this year's Aggie team has started the year with more Olsen Magic than it seemed like we saw all of last year. Blake Allemand led off the 9th with a walk and Logan Nottebrok - who else? - blasted his 2nd HR of the day and 2nd walk-off HR of the season to left field. It was an absolute no-doubter off the bat and the Aggies breathed a sigh of relief in bringing the series back to even. 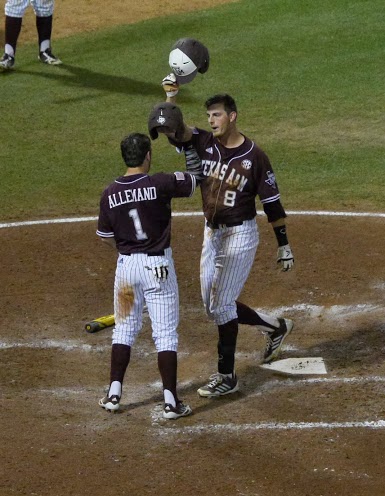 With a series win at stake, A&M turned to Grayson Long on the mound and the sophomore did not disappoint. The sophomore was not quite as dominant as he was last weekend, but still managed to toss 7 scoreless innings and allow just 5 hits and a walk as well as 2 strikeouts. Matt Kent and Jason Jester each worked clean frames to complete A&M pitchers' second shutout on the season, although Jester again allowed a pair of hits in the 9th. Jester has certainly not been nearly as sharp with his stuff to start this season as he was much of last year, and I'm wondering if opposing hitters are sitting on fastballs early in the count. It's something to keep a close eye on as we move through the nonconference schedule.

At the plate, A&M got a big day out of 1B Cole Lankford who went a perfect 3-3 with a pair of runs and 2 RBI. Mitchell Nau also made the most of getting the start at catcher, going 2-4 with a run and an RBI. The Aggies got the scoring started in the second inning with an RBI single from SS Logan Taylor - his first hit of 2014 - and J.B. Moss was hit by a pitch with the bases loaded to add a 2nd run. Lankford picked up the first of his RBI with a sacrifice fly in the 3rd, and his second came in the 5th with a single. Mitchell Nau followed Lankford's hit with a double of his own which brought Cole home and would be the final tally of the day for the Aggies at 5-0. 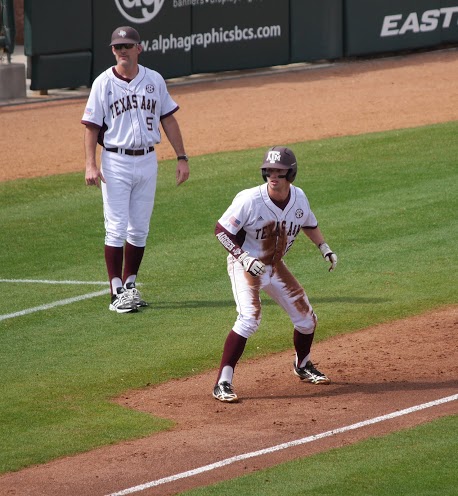 Both teams come into this game with 6-1 records, with the Huskies sweeping Prairie View A&M to start the year and winning a midweek game against UTSA. HBU did drop a game to the same Northeastern team that A&M swept last weekend, but they recovered to win that series. The Huskies will start RHP Ross Kennell who had a rough go of things last week against UTSA, giving up 5 earned runs on 10 hits and a walk in just 4.2 innings of work. The Aggies turn again to freshman Tyler Stubblefield, who pitched quite well against SFA last Tuesday.

The Aggies hit the road for the first time in 2014 and head to California to take on Fresno State. The Bulldogs currently have a 6-2 record, with the losses coming to UC-Irvine and the same Sacramento State team that A&M just defeated. Fresno State hosts CSU Bakersfield in a midweek game tomorrow. Game times (all central) are slated for 8:35pm Friday, 4:05pm Saturday, and 2:05pm on Sunday.

The Bulldogs are hitting .276 as a team, averaging 5.4 runs per game and have hit 2 HR and 18 2B. Their pitching staff features a team ERA of 2.96, they've struck out 50 and walked 28, and they are allowing opponents to hit for an average of .220. I wouldn't be surprised if we have a pitcher's duel on Friday, as RHP Jordan Brink has been outstanding at the front of the rotation for Fresno State, allowing just 1 earned run and 5 hits with 10 K and 4 walks in 14.2 innings of work over 2 starts.