Texas A&M edges Tennessee in the craziest game of the season thanks to balanced offensive output, late-game heroics by Antwan Space, and a committed section of drunk enthusiastic GBH support.

This was a fun basketball game, y'all. There's too much to discuss, so I won't waste any more time at the top. Let's jump in.

How do I describe the GBH meetup diplomatically... we had some "staggered" arrival times from Blackwater Draw, ranging from "barely arriving for tip-off" to "shirtless dancing on the jumbotron" to "hospital." To those that sacrificed the opening section of this game for one last round - that was a fantastic decision. Because (and this will surprise absolutely no one) the opening section of this game was awful.

The Volunteers started 5-17 from the field (and 0-5) from the line, but we responded by shooting 5-18 and not getting to the line at all. Both sides did limit the early turnovers, but the brick show was on full display.

When the dust settled, it was only 11-11 at the under-eight break.

Put simply, the second half was great entertainment. Both teams ignored their suspect first-half shooting and came out guns blazing, with Jamal Jones (29 minutes; 14 points / 4-14 FG / 2-4 3PT) and Harris leading the way for the Aggies. Caruso's daily "and one" pressed the advantage further, but UT's Jeronne Maymon (38 points; 16 points / 13 rebounds / 7-9 FG) and Josh Richardson (39 minutes; 11 points / 4-10 FG) responded quickly and tied the game heading into the under-twelve break.

A second Caruso "and one" was immediately followed by an Antwan Space (35 minutes; 6 points / 7 rebounds / 2-5 3PT) three, and after a pair of McRae free throws the Caruso show continued with a steal + breakaway dunk. The Aggies were up six and had some legitimate momentum for the first time all afternoon. This momentum lasted approximately fifteen seconds, as McRae demanded the ball and hit a deep three to silence the Reed faithful.

The two squads traded buckets (and missed shots) for the next couple of minutes, but Fabyon Harris scored a bucket and two free throws on two very strong takes to push the A&M lead to eight. (quick note: Harris was confident from outside and very decisive with the ball on the wing - it was his best game of the season)

UT opened this section of the game with two straight turnovers, but our Aggies responded with two stagnant possessions that led to misses from outside. Two McRae free throws knocked the A&M lead to six, and the fouling game was on. It took a couple of fouls to get A&M in the bonus, and on the ensuing inbounds play the Ags turned it over, leading to one of the best dunks of the college basketball season by UT's Richardson. I give Caruso credit for trying to meet him at the rim, but it was a tremendous play by Richardson.

After a Kennedy timeout the Ags run a play to get Jamal Jones the ball, and he hits both FT's to push the lead back to six. Tennessee immediately responds with Maymon down low, and the full court press is on. We do a fantastic job breaking that press without getting fouled - so much so that Jamal Jones finds himself inside the paint with a numerical advantage.

But instead of pulling it out (or simply waiting to get fouled), Jones forges ahead and misses the contested layup with 45 seconds remaining. The Volunteers miss a three, but Stokes gets away with two consecutive clear push offs does some fine work on the offensive glass to keep the possession alive. After a second missed three and a second Stokes rebound, UT coach Cuanzo Martin calls a timeout to settle the troops.

An Alex Caruso foul leads to two Stokes FT's, and Caruso himself is fouled on the inbounds pass with 15 seconds remaining. He misses the front end of a one-and-one, and all of a sudden Tennessee has the ball down two with a chance to tie/win. How on earth did this happen.

Tennessee's possession is very disorganized, with A&M determined to deny McRae the ball and UT determined to force it to him anyways. As the clock the ticks under three seconds, Antonio Barton (32 minutes; 2 points / 0-5 FG) launches a desperation three... and it hits.

Well, except for the Tennessee bench and scattered Tennessee fans, who are absolutely losing their minds. But admist the chaos I see furious referee arm-waving, and over the intercom comes the most beautiful words I have heard all season.

"Tennessee Coach Cuanzo Martin called a timeout prior to the shot"

Pandemonium. Well, a "half-full Reed" version of pandemonium. Aggie fans losing their minds, Tennessee fans calling for Martin to be fired on the spot (I'm not kidding), and everyone collectively realizing that holy crap the game isn't over the biggest possession is still to come.

Now, I'd like to take a quick break here and introduce a new segment called "gigthem08's advice on how to defend an inbounds pass from midcourt." The title isn't perfect, but it will have to do for now.

gigthem08's advice on how to defend an inbounds pass from midcourt 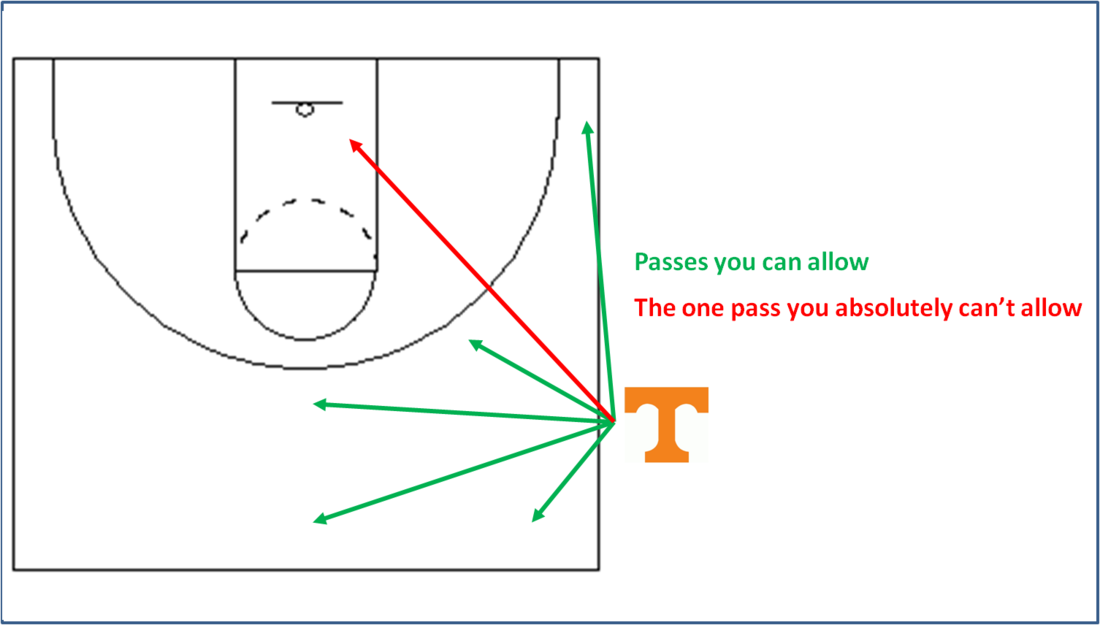 Which pass do you think Tennessee made? I'll give you three guesses but you won't need the first two.

Stokes receives the ball on the right block, goes strong to the hole, makes it, and gets fouled with under one second remaining. In other words, the one thing that you can't let happen is the thing we let happen.

Stokes steps to the line with the game tied at 59... and misses the free throw. We're headed to overtime.

So, Caruso had fouled out, A&M had lost a lead that seemed un-loseable, and Tennessee had missed a free throw to win the game. What else could happen?

The first couple of minutes started out innocently enough, with Jamal Jones trading free throws with UT's Richardson. The next two Aggie possessions led to a Jones miss from three and a nice Richardson block, but UT couldn't capitalize on their end. McRae finally hit from mid-range, but Jones immediately answered to bring the score to 63-63 with just over a minute remaining.

After a Tennessee turnover, an uninspired A&M possession is saved by an off-balance Jordan Green (31 minutes; 6 points / 3-8 FG / 3 assists) bucket as the shot clock expires, putting A&M up two with 40 seconds to play.

Kourtney Roberson fouls Antonio Barton on the ensuing possession, and he hits two clutch free throws to tie the game at 65 with 16 seconds remaining.

At this point, one of the following three things happened

A) A poor Aggie possession leads to no shot attempt, and we're headed to a second overtime

It was C. He did it again. The crowd explodes, Tennessee is shell-shocked, and the good guys moved to 7-7.

Fabyon Harris was huge. At times his shooting form has looked "over-coached," but on this day he simply rose and fired en route to 3-3 from beyond the arc. Take that, Bobby Knight.

Roberson was solid down low, Green was aggressive at the right times, and Tavario once again provided much-needed rebounding help and hustle/energy. Everyone chipped in, and we needed every last contribution.

One quick note on the GBH Meetup - This thing was a wild success, and we're surely going to have another one. Probably with a couple of release forms, but another one all the same. If you can make it, you should.

Thoughts on our NIT chances? Want to share a GBH meetup story? Hit the comments below.