After starting the season a perfect 4-0, Aggie Baseball will welcome the Hornets of Sacramento State to Olsen Field this weekend.

After a comfortable win over Stephen F. Austin on Tuesday, the Aggies get set to take on Sacramento State as they look to remain perfect on the 2014 season. A&M got off to a strong start to the season last weekend by sweeping Northeastern and outscoring the Huskies 22-4 in the 3 game series. Tuesday's game saw true freshman Tyler Stubblefield make his first start in the Maroon & White and pitch pretty well, although he couldn't quite get himself out of the 5th inning in order to put himself in line for the win. Stubblefield struck out 8 batters and walked just 1 in 4.1 innings of work, allowing 1 run on 3 hits and a hit batter. Matt Kent earned the win for the Aggies out of the bullpen, working 1.2 innings and allowing a pair of earned runs. Scoreless frames for Jason Freeman, AJ Minter and Ryan Hendrix closed out the night for the Aggies on the mound.

The A&M hitters picked up where they left off from the first 2 games against Northeastern over the weekend, racking up 17 hits against the Lumberjacks and scoring double digit runs for the 3rd time in 4 games. This is a stat that is worth focusing on for a second, as it gives you an idea of the difference (so far) between last year and this year. A&M didn't score double digits in a game in 2013 until their 21st game of the season, and they didn't do so 3 times until their 30th game. 4 games to do that in 2014, 30 to do it in 2013. That's a big difference.

Getting back to Tuesday's win over SFA, Patrick McLendon had a terrific game batting at the top of the lineup, going 4-6 with a double and a pair of RBI. Cole Lankford shrugged off a slow start from last weekend by going 2-4 with a walk, 2 runs, and a 2-run HR. J.B. Moss continues to be the biggest surprise for me so far this year, going 2-4 with 2 runs, a walk, and 2 RBI. Moss is now tied for the team lead in batting average (.417) with Jace Statum, leads the team in steals (3), and continues to play great defense in RF.

The Hornets of Sacramento State, meanwhile, come to College Station with a 3-2 record after splitting a 4 game series with Utah to open the season and defeating Fresno State - who the Aggies will travel to face next weekend - on Wednesday. Sacramento State finished 5th in the Western Athletic Conference (WAC) last season and were picked to finish 3rd in 2014. The Hornets are averaging just 3.8 runs scored per game and allowing 3.4; the Aggies, meanwhile, are averaging 8.5 runs per game and allowing only 1.75. This will be the first ever meeting between the Aggies and Hornets.

Nichols is a 6'5 junior from Bangor, CA who got the Hornets' 2014 season started with a win last Friday. Nichols went 6 innings against the Utes and allowed 2 earned runs on 5 hits to go along with no walks and 5 strikeouts, including the last 2 batters he faced. Nichols threw 76 pitches in that game, 50 of them for strikes, and was helped by the Hornets jumping to a 2-0 lead in the 1st inning. 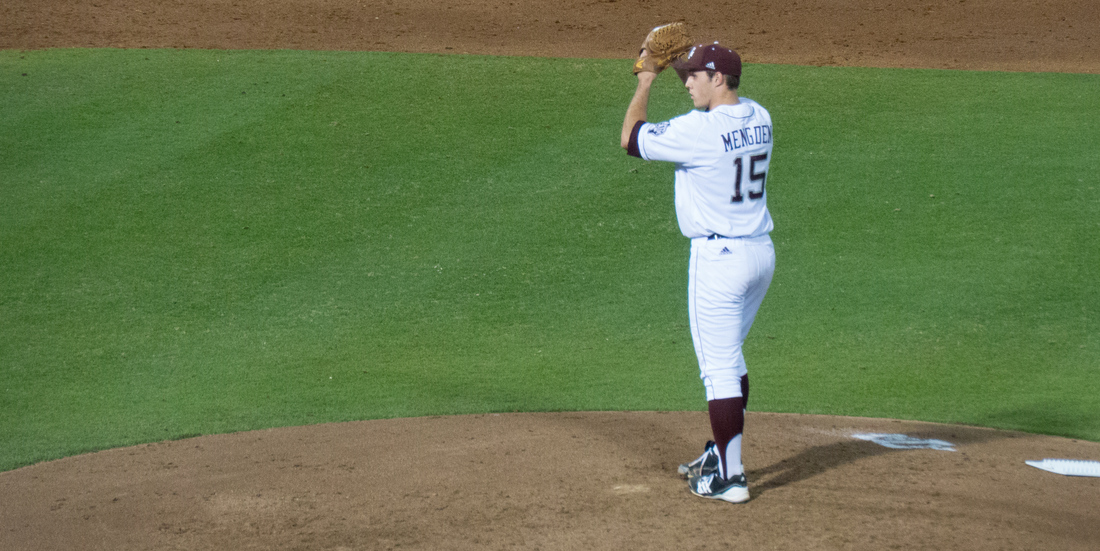 Mengden had the adrenaline flowing on Opening Day against Northeastern and had to work out of a few jams early on, but in his last few innings his stuff was outstanding. Mengden struck out 11 Huskies in just 6 innings of work, while also allowing 2 earned runs on 5 hits to go along with 2 walks. He will likely be looking to improve on his command and really challenge the Sacramento State hitters in order to be able to go deeper into the game than he was last weekend. (Photo courtesy of @Statboy203)

Leitao became the first ever Sacramento State pitcher to be named an All-WAC First Team Selection in 2013, finishing the season 8-3 with a 2.77 ERA. Leitao had a strong performance in his first start of the 2014 season, although the Hornets were held to just 1 run on 3 hits and he Leitao was saddled with the loss. He tossed 7 innings against the Utes and allowed 2 earned runs on 6 hits along with a pair of walks and 4 strikeouts. Leitao threw 79 pitches, 54 for strikes, and held Utah to just 2 hits through the first 5 innings. 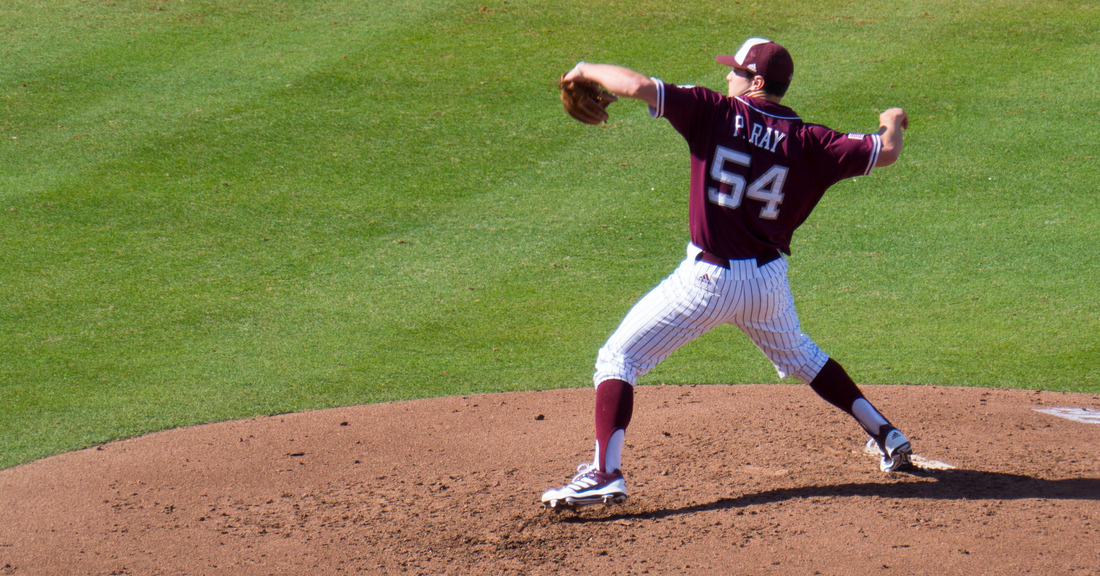 Parker Ray didn't really have his best stuff for most of his first start of the season, but he battled on the mound and was able to keep the Northeastern damage to a minimum until the Aggies' bats came alive and put the game out of reach. Ray did manage to strike out a career high 7 batters, walked 2 and gave up 6 hits which amounted to just 1 run for the Huskies. I think we'll see Parker settle down a bit this weekend now that he's got his first start of the season behind him. (Photo, as usual, courtesy of @Statboy203)

The official Aggie Athletics preview has this spot listed as TBD for Sacramento State, but I expect the start will go to true freshman RHP Jared Paderez. Paderez got the start last Sunday against Utah but did not factor in the decision, going just 4 innings and allowing 2 earned runs on 6 hits with 2 walks and 2 strikeouts. Senior RHP Hunter Greenwood is another option, should the Hornets choose to make a change, although he started Monday's Game 4 against the Utes. Greenwood took the loss in that game with 5 innings of work, allowing 3 earned runs on 5 hits to go along with 3 walks and a strikeout.

Grayson Long was actually the A&M pitcher who impressed me the most last weekend, and he will look to build on that strong performance. Long didn't earn a decision despite going 7 innings of scoreless ball, as the Aggies were unable to find the runs column until the 9th inning. Long allowed just 2 hits to Northeastern and struck out 7 batters while walking 3. He did a really nice job of keeping hitters off balance and got a couple of big outs in really tough spots to keep the Aggies in the game.

As mentioned, the Hornets haven't exactly started the season ripping the cover off the baseball. LF Chris Lewis and RF Nathan Lukes are the Hornets' leading hitters who return from last season. Lukes has gotten off to a strong start to this season and proven to be a difficult out at the top of the Sacramento State lineup. Leading the team so far this year in the RBI category is 3B Will Soto, driving in 4 runs in 19 AB. Brandon Hunley and Scott Loper have alternated starts at 2B to start the season, and Hunley has been much more productive at the plate than Loper. Soto and 1B Rhys Hoskins lead the team in errors with 2 apiece. Let's do some quick offensive comparisons between the Hornets and Aggies. As you'll see, A&M has started the year substantially better at the plate, although my favorite stat may be the K/BB ratio for the Aggies - it's so much better than it was last year, at least so far.

The Sacramento State pitching staff has done a pretty nice job to start the 2014 season, allowing just 3.4 runs per game. Outside of the Hornets' starters, reliever RHP Alex Palsha and closer RHP Sutter McLoughlin have led the way. Palsha leads all non-starters in innings pitched, with 6 in 4 appearances, and has not allowed a run to score while giving up just 1 hit, 1 walk, and striking out 7 batters. McLoughlin has picked up a pair of saves and a win in 3 appearances, throwing 3 scoreless innings combined with just 2 hits, a walk, and 5 strikeouts. Its worth noting that the Huskies are a primarily right-handed pitching staff, with just 2 southpaws on the roster. Freshman LHP Sam Long - who started and won Wednesday's game against Fresno State - is one of those, while sophomore Alex Fitchett has not made an appearance so far this season. Here's a pitching stats comparison between Sacramento State and A&M so far this season.

Here is my best guess at the lineup that the Hornets will feature this weekend.

So, there are quite a few things that jump out at me just glancing at their lineup. As mentioned already, they haven't scored a lot of runs through their first 5 games - they're averaging less than 4 runs a game. Outside of Lukes and 2B Brandon Hunley (who only has 8 AB), the Hornets next best hitters (Soto and Burcham) feature a .263 average. There are eight regular starters for A&M with batting averages above that. The Hornets have yet to hit a HR through their 5 games and have stolen just 2 bases. They have allowed opponents to steal 9 bases on 14 attempts as well. I'll go ahead and leave this right here, though, because this is a pretty smooth catch by CF David Del Grande.

Perfect Game writer Kendall Rogers had an interesting take on this weekend's series after the Hornets knocked off Fresno State on Wednesday.

Rhys Hoskins had 2 hits and an RBI tonight as @SacStBaseball beat #FresnoState 6-4. Would keep an eye on Sac State’s series at #TAMU. Upset?

Kendall does great work, but I'm going to disagree with him on this one. I'm going to continue pumping sunshine until this team gives me a reason to hit the brakes. I think the Aggies sweep this series and remain perfect on the season, although I wouldn't be surprised if there are a few less runs on the scoreboard this weekend than we've seen through the first 4 games.

Keep an eye on whether or not CF Krey Bratsen returns to the lineup for the Aggies this weekend. Bratsen missed last weekend with an illness - he was in the hospital, in fact - and with Jace Statum filling in admirably in CF and Moss getting off to a great start in RF, the coaches may be cautious with returning Bratsen to the lineup too quickly.

Last, but most certainly not least, I hope to see some of y'all at the Good Bull Hunting meetup this Saturday. We're starting at Blackwater Draw at 11am, heading over to the basketball game (*le sigh*) around 2, and then over to Olsen after that. Come hang out with the GBH crew and say hello, and BTHO Sacramento State!