Aggies in the SEC, Longhorns in the Big 12: A tale of two programs

Texas A&M is enjoying a perfect storm, but is it sustainable?

Share All sharing options for: Aggies in the SEC, Longhorns in the Big 12: A tale of two programs

Texas A&M is the hot brand in the state of Texas right now, and that's bearing out on the recruiting trail and in the TV ratings. But will A&M's limelight dim with the departure of Johnny Manziel? Let's take a look at the current state of affairs and then try to figure out where we go from here.

The draw of playing in the SEC and any related gadgetry seem to be paying off in a big way for Texas A&M on the recruiting trail. According to Rivals.com, A&M's 2014 class was ranked #6 in the nation. The Aggies' class included LB Otaro Alaka and DT Zaycoven Henderson, both 4-star recruits who flipped from the Longhorns to Texas A&M. That Longhorn class finished with a #20 ranking, just behind Kentucky and Ole Miss. The disparity may continue to grow as the Aggies are sitting with the #1 recruiting class in the country for 2015 according to 247Sports.com's Composite Team Rankings.

Observing the recent trends in landing four- and five-star recruits, we see that Texas A&M is on the rise while the Longhorns are on a downward slide. Will disciplinarian Charlie Strong be able to add stability and slow down Kevin Sumlin's momentum? 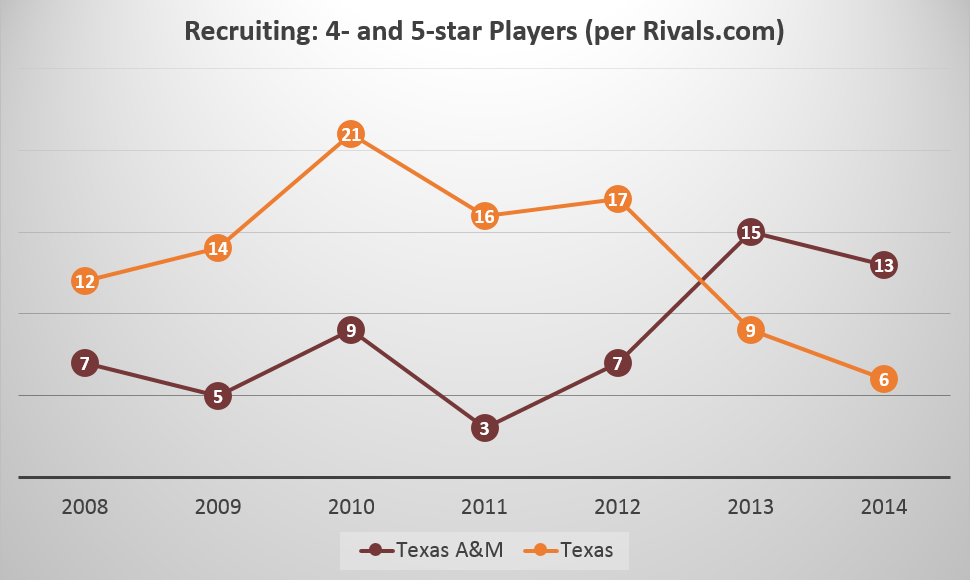 Texas A&M experienced a huge spike in TV exposure during their 2012 inaugural SEC season, scoring the 4th-highest rated game of the regular season (a road win over Alabama) and the 4th-most watched bowl game (a blowout Cotton Bowl win over Oklahoma). According to Jason Cook (Sr. Associate Athletics Director), Texas A&M earned $6.5 million in "free media" during the opening weekend versus Florida which was featured on ESPN's College GameDay. Cook also noted a staggering $37 million in free media exposure during the timespan that included a win over Alabama, Johnny Manziel's Heisman campaign, and a Cotton Bowl win.

Building on the successful 2012 campaign and a growing national interest, the Aggies were the second-most watched college football team in the country in 2013. Texas A&M averaged more than 5 million viewers per televised game. Alabama at Texas A&M was the highest rated game of the regular season (9.0/21), bringing in CBS's highest afternoon rating in 23 years. Four of Texas A&M's games were the highest rated during the week they were played. Even during "Rivalry Week" when the Aggies met non-rival Missouri, Texas A&M played in the the 3rd most-watched game behind only Alabama-Auburn and Ohio State-Michigan. ESPN drew a huge 5.3 overnight rating for the Chick-fil-A Bowl, the highest non-BCS bowl game since at least 2000.

Meanwhile, the Texas Longhorns were the 26th-most watched team, with the numbers skewed in their favor since games aired on the Longhorn Network are not included in the data. Ratings include only games on ABC, CBS, FOX, NBC, ESPN, ESPN2, ESPNU, and FOX Sports 1.

Texas A&M has an uphill climb against the Longhorns, who have dominated collegiate licensing in the state, but recent trends show that the Aggies are enjoying a significant upward trajectory as members of the SEC. According to Jason Cook, Texas A&M was ranked 21st among Collegiate Licensing Company (CLC) schools prior to moving to the SEC but finished the last fiscal year ranked 12th. Royalties jumped 27% in the six months following the SEC announcement, primarily due to the availability of SEC co-branded merchandise and an unconventional partnership with the SEC. For the most recent quarter, Texas A&M was #1 in royalty revenue growth among CLC schools and jumped to #8 in overall royalty revenue.

The Aggies will continue to ride the SEC wave in the post-Johnny era. The conference gap is massive right now between the SEC and everyone else. There were twelve SEC teams ahead of the Longhorns in TV ratings for 2013. Ten SEC teams out-recruited the Longhorns for 2014 according to Rivals.com. Charlie Strong needs the Aggies to stumble and stumble badly if he wants to overcome conference inequality and put the Longhorns back on top in the state.