The Aggies started the season a perfect 3-0 this weekend by sweeping the visiting Northeastern Huskies.

Before we talk about the actual baseball - which it's very nice to finally be able to do again - can we take a second to appreciate how incredible the weather was for an Opening Weekend?

OK, now we can talk baseball. I'm not sure that head coach Rob Childress could have asked for a whole lot more from this weekend to get the 2014 season started. There were a number of newcomers who stepped in and made big contributions right away. There were veterans who struggled at times last season but got off to a hot start this year. There were guys battling on the mound despite not having their best stuff at times. And the Aggies were able to get an early experience of a close, low-scoring game - which may be a regular occurrence in SEC play - and find a way to get a win.

Last season A&M started the season with an Opening Day loss and only outscored Illinois-Chicago 9-6 in that series victory. Things definitely have started a little different in 2014, as the Aggies outscored Northeastern 22-4 in completing the 3-game sweep. Games 1 and 2 ended up being comfortable wins for A&M (10-2 and 11-2), but game 3 came down to a Logan Nottebrok walk-off blast in the bottom of the 9th to give the Aggies a 1-0 win. It's always a little tricky to evaluate an opening series like this; you don't want to read too much into it, but you also don't want to discount anything too much either. That said, there were a number of positives that Aggie fans can take away from the sweep.

We knew that pitching was going to be a strength for A&M going into this season - as it typically is under Childress - but this has the potential to be one of the deeper pitching staffs that the Aggies have had in recent years. Yes, the obvious exception is when you had John Stilson, Michael Wacha and Ross Stripling as your weekend starters, but this 2014 staff has the potential to be not too far behind. As Stripling was in that rotation, Grayson Long is a guy who could start on Fridays for more than a handful of teams but is the Sunday starter for A&M. Long had an excellent first start of the season on Sunday, going 7 innings - a career high - and allowing no runs on just 2 hits to go along with 7 strikeouts and 3 walks. 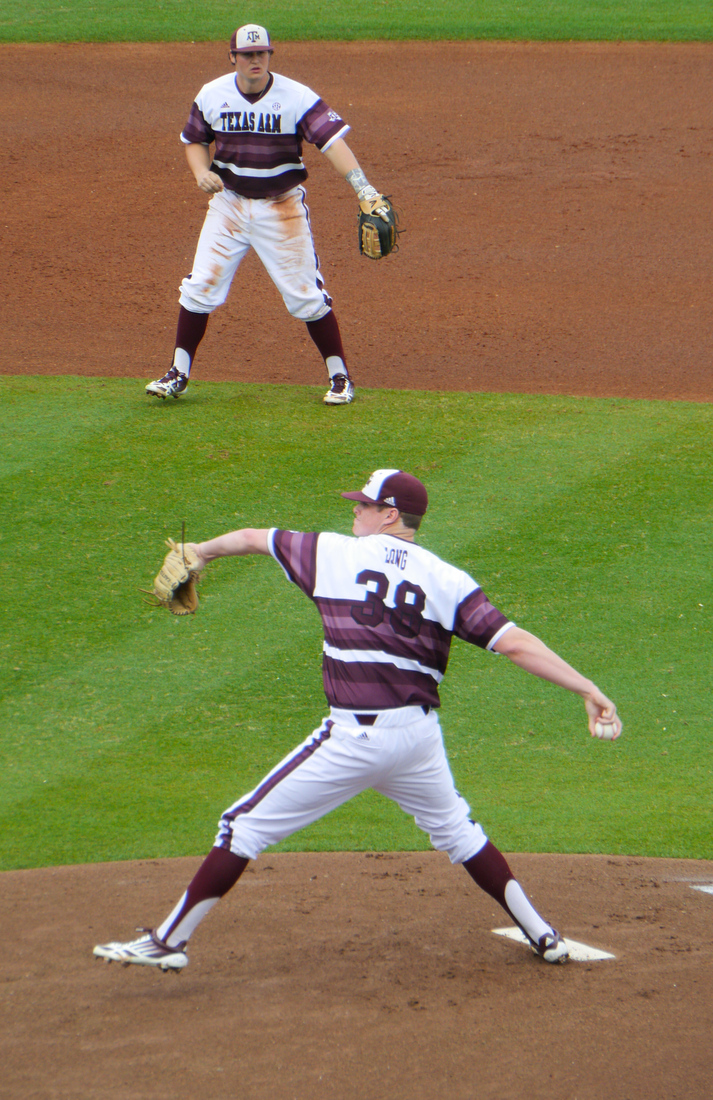 Daniel Mengden and Parker Ray both had career days in the strikeouts column - Mengden tied his career high with 11 and Ray broke his with 7. Mengden seemed to have the adrenaline flowing on Friday night and got hit a bit early, giving up 2 runs and 4 hits in the first 2 frames. He settled down very nicely, though, and was outstanding in his last 3 innings, striking out 5 of the final 10 batters he faced. Ray didn't really have his best stuff for most of Saturday, but he really battled on the mound and managed to only give up 1 run on 6 hits and 2 walks. Northeastern took their first - and only - lead of the weekend in the 3rd inning, but Ray struck out batters to end both the 3rd and 4th innings which allowed the Aggies to take the lead back in the 3rd and put it out of reach in the 4th.

There were also some very strong outings from guys out of the bullpen for A&M this weekend, starting with sophomore Andrew Vinson who was the only Aggie to make 2 appearances this weekend. Vinson threw 2.1 completely clean innings - no runs, no hits, no walks, no hit batters - and added 3 strikeouts. A pair of true freshmen were excellent in relief of Mengden on Friday - Tyler Stubblefield threw 2 scoreless innings with 2 hits and a strikeout and Ryan Hendrix was dominant in the 9th, allowing no baserunners and striking out 2 of the 3 batters he faced. Corey Ray had some command issues in his appearance on Saturday - walking 2 batters and allowing a hit, but he managed to escape without allowing a run.

And then there's the hitting. How nice is it to see double digits on the A&M side of the scoreboard for 2 of the 3 games after scoring 9 combined runs in last year's opening series? And don't let the box score from Sunday's game fool you; the Aggies hit the ball extremely hard, especially in the first 5 innings, they just somehow always found one of the Huskies' outfielders. Logan Nottebrok obviously took the headlines this weekend by going 3-4 with 3 RBI and 2 runs in his first game in the Maroon and White and then following that up with the walk-off HR on Sunday. Nottebrok finished the weekend 4-9 with 4 RBI and 5 runs. Troy Stein was inconsistent at times in 2013 but got off to a good start at the plate this weekend, going 4-11 with a pair of doubles and 5 RBI. JUCO transfer Patrick McLendon got the start at SS this weekend while Logan Taylor recovers from injury and McLendon did a nice job in his place both defensively and at the plate. Although he had an error on Sunday, McLendon made a number of nice plays in important spots and also managed to drive in 3 runs despite having just 3 hits on the weekend. Jace Statum played admirably for the sick Krey Bratsen in CF, going 3-8 with 3 runs at the bottom of the lineup, and Blake Allemand made sure he didn't start with a slump like he did in 2013 by going 2-4 with a pair of runs and RBI on Friday. 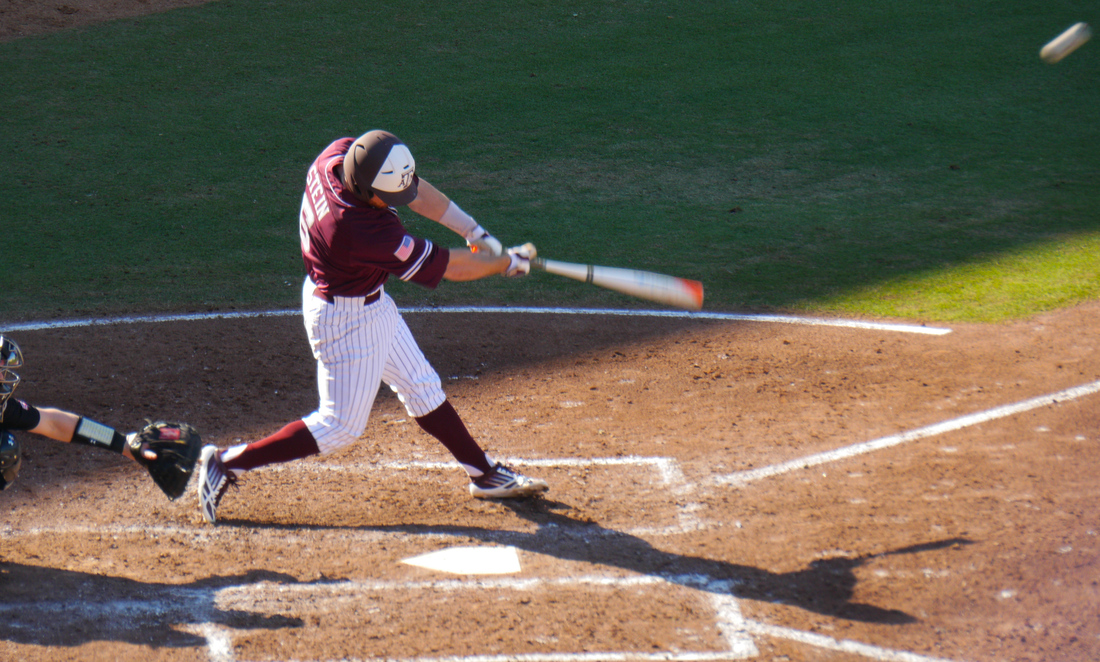 I was excited to see the Aggies strike out just twice on Friday - and eventually just twice again on Sunday as well - but they reverted a bit to last year's form on Saturday against a left-handed starter, fanning 8 times including 2 each by Hunter Melton and Mitchell Nau. Cole Lankford got off to an ice cold start to the 2014 season with a hitless weekend, going 0-7 with only a sacrifice fly to show for his efforts. Ronnie Gideon also failed to find the hits column in 4 at bats - and added a pair of strikeouts - after looking great in last Saturday's team scrimmage. All things considered, though, it was a very promising start in the hitting department for A&M, especially relative to what we saw last season to start the year.

SFA comes to Olsen after a 2-1 weekend in Arlington, with wins over UT-Arlington (14-9) and Incarnate Word (12-5) and a loss to Oklahoma State 3-1). The Aggies will start freshman Tyler Stubblefield on the mound.

The Hornets come to Aggieland this weekend after a series at home against Utah. They wrapped that series up on Monday with a loss which gave them a series split, with all 4 games being decided by one run (3-2, 1-2, 5-4, 4-5).