In the 2nd and final part of our 2014 Aggie Baseball preview, we'll wrap things up by looking at what players return to the team from last year, highlight important dates on the schedule, and look at the big picture for the upcoming season.

GAME WEEK IS HERE! That's right, folks, at long last we can officially say that college baseball starts this week. As we inch ever closer to Opening Day on Friday, we've got you covered with everything you need to know before heading out to Olsen Field. In case you missed it, Part 1 of our Aggie Baseball preview takes a look at what players the Aggies lose from last season and new arrivals to the team for this year.

just 8 of 35 players are in their first year at the collegiate level.

Now it's time to take a look at returning players who will be expected to contribute for A&M this season. As mentioned in Part 1, this year's team is likely to feature a number of returning players and upperclassmen who transferred from JUCO, so I wouldn't call this 2014 team a "young" one. In fact, 16 players on the roster are classified as upperclassmen and an additional 11 are either sophomores or redshirt freshmen, so just 8 of 35 players are in their first year at the collegiate level.

As we move along, we'll also take a quick look at the Aggies' schedule for this season and focus on some dates you'll want to be sure are in your calendar. We'll then take a stab at predicting opening day starters, and wrap up by some predictions for the 2014 season. Later this week, we'll have a separate preview for the opening series against Northeastern that starts on Friday.

(All photos used in this article are courtesy of Ethan Erickson.) 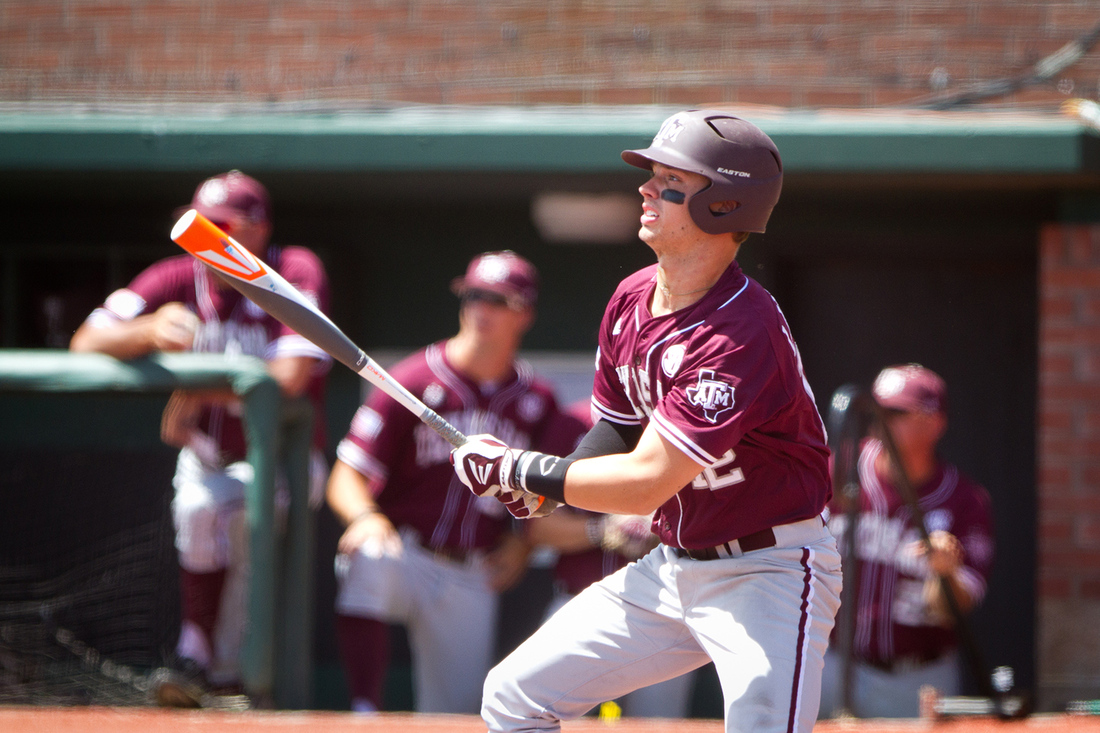 The returning group of position players is led by junior 1B Cole Lankford, who led the 2013 team in all sorts of statistical categories - also including doubles, triples and fielding percentage which aren't listed above. I really love Cole's swing and his defensive play, so I am fully expecting a huge season for him in 2014 - especially in his 1st year of draft eligibility since coming to A&M.

I am very interested to see how senior CF Krey Bratsen performs this season after a relatively up-and-down year in 2013. Bratsen's overall stats were fairly average, but believe it or not Krey led the team in batting average (.340) in SEC play and was 3rd in slugging and 2nd in on-base percentage. I think most surprising for me was that he only drew 14 walks on the season. Considering he was 2nd on the team in stolen bases last year, Krey has got to do a better job of getting on base and making the most of his speed. 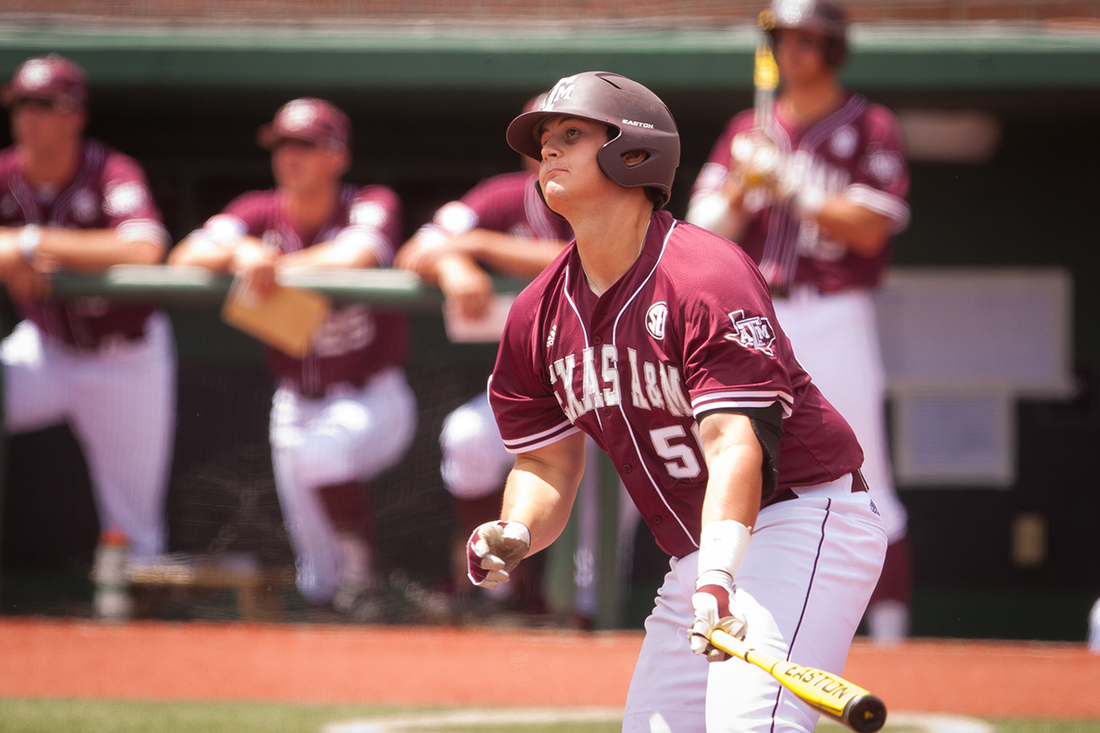 Sophomore INF Logan Taylor didn't get a ton of at-bats last season and his numbers are certainly underwhelming, but he had a tremendous spring and fall and has a chance to be a big piece of the Aggies' lineup in 2014. Fellow sophomore 3B/DH Hunter Melton was the main power threat for A&M last season, leading the team in HR and finishing 2nd in slugging percentage. Having a number of newcomers who can hit for power - Nottebrok, Hinsley, Banks, Gideon, etc. - should push Melton to continue to improve as he fights for a starting spot. Junior 2B Blake Allemand is likely a starter to begin 2014 but with guys like Birk and even Nick Choruby behind him, Blake cannot afford to start the season in an 0-for-a whole lot slump like he did last season.

It's no secret that the Aggies relied heavily on their pitching in 2013 to make their way to a 7th straight NCAA Regional. While the lineup should be improved for A&M in 2014, the pitching staff should be just as good if not better. The Aggies welcome back 2 weekend starters in RHP Daniel Mengden and RHP Parker Ray, giving the Aggies one of the best Friday/Saturday combinations in the SEC.

I expect to see sophomore RHP Grayson Long, following a strong end to the 2013 season, as the Sunday starter to begin the season for A&M. RHP Corey Ray and LHP A.J. Minter will be in the mix for that spot (should Long struggle) and the midweek starter spot. Senior RHP Jason Jester set the A&M record for saves in a season (14) in 2013, and chose to return to A&M for his senior season despite being drafted in the 30th round by the San Diego Padres. It goes without saying that Jester will be a vital piece of the A&M bullpen - and a big key to the Aggies' success as a team - in 2014.

March 4: Ags play at The Ballpark in Arlington (or Globe Life? whatever) vs UT-Arlington.

April 11-13: Series at Vanderbilt for first time as SEC members after splitting a pair of SEC Tournament games in 2013.

April 22: A&M plays at Reckling Park against Rice in Houston.

April 24-26: Toughest road series of the year at Mississippi State, who are championship contenders. 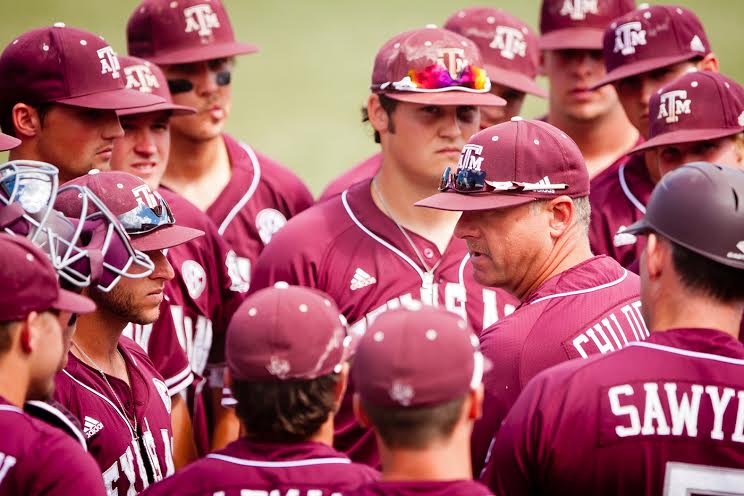 Despite returning quite a few players who saw significant playing time in 2013, there is a decent amount of uncertainty regarding the starting positions for this season. That isn't necessarily a bad thing, though, as a number of new players appear to be showing enough to the coaching staff to warrant consideration for earning starting spots over players who were regular starters last season. So, here's my sure-to-be-way-off guess at how the Opening Day Lineup might look.

A couple of notes on that lineup prediction. Logan Taylor has been banged up and didn't appear to be 100% in limited action at last Saturday's scrimmage. If/when he's healthy, he will likely be starting at SS and Allemand will be at 2B. I think the 3B, DH, LF and RF spots - and possibly catcher - are still up for grabs, both right now and moving forward. Other players that are right there in the starting mix are: Ronnie Gideon (3B/C), Jonathan Moroney (LF), and Jace Statum (RF). Troy Stein would probably have to play his way out of starting at catcher, but if Gideon continues to hit the ball like he did last Saturday it's certainly going to keep the pressure on Troy to play well.

As far as pitching is concerned, Mengden and Parker Ray are your Friday and Saturday starters, but there is plenty of competition for both Sunday and the midweek spot. As mentioned, my hunch is that Long will get the first shot at the Sunday role. Minter was out this fall with an injury but is back to being healthy now; the only question is whether or not he's ready to be stretched into a midweek starter role just yet. If not, look for a pair of newcomers - JUCO transfer Hayden Howard and freshman Tyler Stubblefield - to be right there with junior Corey Ray fighting for that spot.

The Aggies' bullpen will obviously be highlighted by closer Jason Jester at the back end, and I expect a nice mix of newcomers and returning players will make up the rest of the 'pen in 2014. Howard, Tyler Stubblefield and Corey Ray will all be likely contributors depending on how the midweek starter spot shakes out, and freshmen Mark Ecker and Ryan Hendrix will likely have a chance to get some innings right away. Also look for juniors Jason Freeman and Gandy Stubblefield to be options for Coach Childress, as well as sophomore Andrew Vinson.

Now comes the fun part. What everyone ultimately wants to know is "How is the Aggie Baseball team going to do this year? Can I start planning a trip to Omaha?" My short answer is that I wouldn't suggest making any June travel plans to Nebraska just yet. Having said that, I do think that this team has enough pieces in place - and could benefit from the rigors of playing an SEC schedule - to really make a run in 2014.

The pitching will be a strong point yet again for A&M in 2014, and I think that the Aggies have added enough guys who can really swing the bat that the lineup should be markedly improved. At the very least, the pitching staff this season shouldn't feel like they have to hold opponents to less than 3 runs per game in order to have a chance to win. Looking at the schedule, here's an entirely too early prediction of how I see the season playing out. First of all, the Aggies have a very easy nonconference schedule that they should be able to handle comfortably. One game against Rice and a pair against Sam Houston State are the most challenging non-SEC games. As for conference predictions:

If the Aggies can avoid sweeps at Mississippi State and Vanderbilt, I'd consider that a success. Manage to steal either of those series and I'll be ecstatic. I'm going out on a limb a bit picking a series win at Arkansas, but I don't think the Hogs will be nearly as strong this season as they have recently. Winning series against Florida and Alabama will also be a challenge, but I think the Aggies pull it off thanks to having both of those at home.

If A&M were to win 2/3 games in those 7 series and avoid sweeps in the other 3, you'd be looking at a 17-13 record in conference play. For reference, Mississippi State finished 2013 with a 16-14 record and advanced all the way to the College World Series final in Omaha. Am I saying that I think that's where the Aggies end up in 2014? Absolutely not.

Ultimately, I think that Texas A&M will host - and win - a regional in 2014. It will be no easy task with the SEC schedule that the Aggies have, but I think the lineup will make enough strides to back up an excellent pitching staff and lead to bringing a regional back to Olsen Field. Beyond that? Who knows. Advance out of a regional into a 3 game series with one of the top teams in the country and you have the same chances as any of those other 15 teams of getting to Omaha.

Later this week we'll have a quick Series Preview for this weekend's opening series against the Northeastern Huskies, who were picked to finish 5th in the Colonial Athletic Association. It's actually looking like we may have some great weather on tap this weekend - shocking, I know - so I hope to see a lot of y'all out at Olsen!