It was a slow week for Ags in the NFL, so GBH hit the other performances of note this weekend

Share All sharing options for: Aggies in the NFL (kind of): Week 5

Well, then. After an overrated chicken, three cupcakes and a hog, the good guys finally met their match this weekend. I made the trip to Starkville to witness the carnage first-hand, and the resulting travel affected my ability to keep tabs on the NFL. So imagine my chagrin when I checked the stats to find out that our Ags in the NFL did...... pretty much nothing. It was a program wide shutdown.

With a loss in our hip pocket and a weekend of poor A&M NFL production to pull from, you'll have to forgive me if I take this weekend's highlights in a different direction.

Before I digress, we did have one NFL performance worth noting this week. Von. Ol' reliable. He continues to produce, and he continues to dance.

He's rapidly approaching his old form, and it appears that the sacks (and the dancing) will continue indefinitely.

.@Millerlite40's Shmoney dance from the front and the back. (In case you needed multiple views.) Pics by @Presto89 pic.twitter.com/6iN2VVAyei

That's pretty much it, and the remaining notable performances will quickly spiral off-topic.

When you're in a car for all of the hours, any roadway advantage is welcome. And Mississippi stepped up big with their official "meh" attitude towards passengers with red solo cups, plentiful casinos, and roads that are, well, not Louisiana roads.*

* For those unfamiliar, driving in Louisiana is akin to asking your car to step on legos while barefoot. For hundreds of miles.

One of my favorite things about travelling to road games is the immediate kinship with any Aggie you come across. There's an unspoken "wait, you're an Aggie? I'm ALSO an Aggie! We're now best friends" undertone away from home, and it's awesome.

The "everybody is wearing either maroon or white" issue did complicate this effect slightly, but I met some good people this weekend and it definitely took the sting out of the loss. To those that haven't been on an SEC road trip: go.

Miss Perry was College Gameday's guest picker this weekend, and she was an absolute delight. 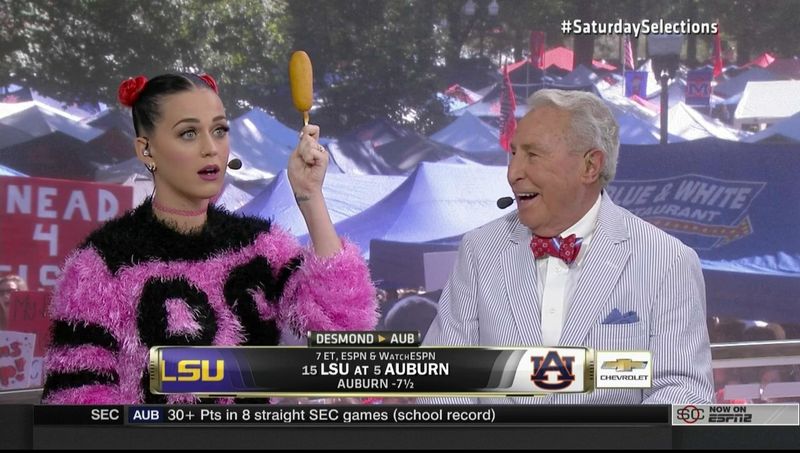 She picked MSU over A&M, she picked Ole Miss over Alabama, and she was generally more entertaining than any other Gameday guest I can remember. Especially Kenny Chesney - the country Drake.

I'm going to bring it back to football to close this week out, because I want to point out a very positive effort in Saturday's loss.

Speedy gave a crap, y'all.

The score, the time remaining... none of it mattered. He blocked his butt off on every play, he made the most of every target, and he threw his all into every punt/kick return of the afternoon. I remember one particular kickoff return down 28, where he just kept churning and it eventually took a small army of Bulldogs to take him down. Down 28.

I don't want to use this as an opportunity to hate on our other receivers, because I don't feel it's productive. I merely want to point out that Speedy absolutely brought it for the full sixty minutes.

In honor of Downs Syndrome Awareness Month, I give a shout out to my favorite Falcons fan, my beautiful sister Gwen. pic.twitter.com/6rNyLW3AXa