THE TAILGATE: A Graphical Preview of Texas A&M vs ULM

After a much needed bye week the Aggies look to rebound from a three game skid and get a win at home.

We're already into November games, so enjoy the College Station tailgating while you can.

The Robertson Family are big fans of ULM. I have seen that ticket sales are low for this game, and personally I don't give a DUCK what your excuse is. Get there and yell loud.

Happy Halloween from all of us at GBH. Be safe, enjoy some tricks and treats, find some Scooby Snacks and we'll see you bright and early for..

Share All sharing options for: THE TAILGATE: A Graphical Preview of Texas A&M vs ULM 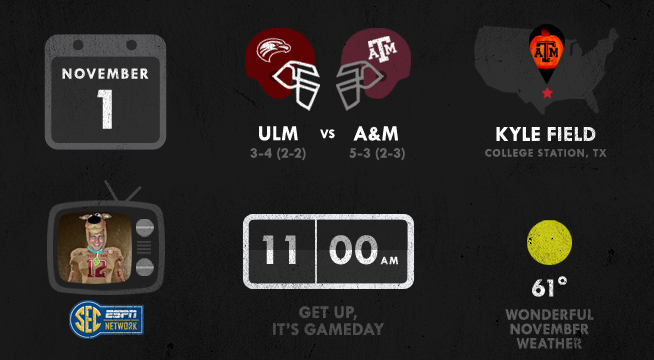 I hope everyone had a productive weekend and at the very least got their heads right after the previous three games. Did anyone sit back and watch a bunch of college football without caring about the outcome? Doing that reminds me that I just love watching football, regardless of the outcome. As a fan, I got the well-deserved rest my heart, liver and emotional fortitude needed so that I could enjoy the next football game without googling "stroke symptoms" again. I enjoy watching football. Regardless of the outcome.

The good news is that as of this writing, we have no idea who the starting quarterback is going to be. None. With that lack of knowledge I can only say that someone is going to put up more Sumlin-like numbers this coming Saturday. It could be Kyle Allen. It could be Kenny HIll. Hell, it could be lucky customer number 17 at the E. King Grill. I understand it's much easier to stand at the ready after consuming the Aggie Burger and a 32 oz Dr. Pepper. IT'S GAME FUEL! I'm just happy that the situation will have righted itself in time to face off against the Sun Belt's finest 6th place team.

All sarcasm aside, the team needs the game. After being Mississippi'd twice and ritualistically sacrificed at the alter of Saban once, a team could use a week off and a sparring partner to help get their feet back under them. The Aggies have been punched in the mouth. Three times. It's time to get back up and start swinging.

Immediately before kickoff, Sumlin calls a quick huddle for inspiration. "Everyone! Take a knee. Boys, I know this one is earlier than we're used to. I know we're playing a lower-tier opponent. I know we've been through some adversity. But the thing is, fellas, we're gonna win this one by 40 points."

"So to ensure that," Sumlin opines while pulling on a heavy-duty glove and reaching for a pair of Adamantium tongs, "I'm going to make you one promise."

Sumlin pulls out a glowing belt from a large, alien-looking containment unit. "This is a literal Sun-Belt. Should we win by 39 or less, you all will take a turn wearing it."

The kick return team snaps to form immediately, and runs back the opening kick for a 93 yard touchdown. It is the cleanest, most vicious and most violent 53 point win the football world has ever seen.

Nobody wants to wear the Sun Belt.

BY DR. NORRIS CAMACHO AND HYPNO-TOAD 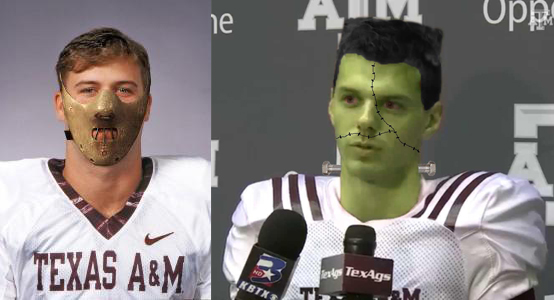 At the beginning of the season, our offense was scary-good. Now it's just plain scary. We've seen a few gimmicks so far out of our offense this year, most notably the "Rhino" package, in which we telegraph a slow-developing run play to ensure the failure of a fourth-down conversion. In honor of Halloween, we have drawn up some more frightening gimmick packages to stun opposing defenses into stopping us for only a minimal loss on possible short-yardage situations. 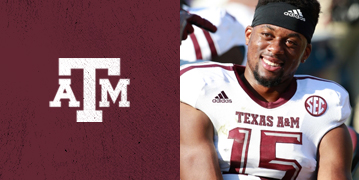 WR: All positions are wide open this week, so why not plug-n-play with another freakish wideout? We could use the type of spark provided by someone who is able to perform the impossible tasks of a) running a route and getting open and b) catching the ball and not fumbling it. 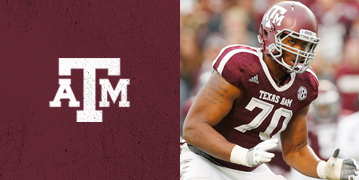 OT: Hell's fire, it's been a brutal few weeks up front with mayhem, personnel turnover, and just confusion in general. No matter who's lining up under center we're gonna need Ced to keep everybody on task with his vast starting experience and overall calming presence. 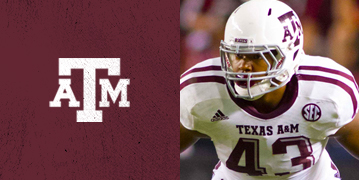 LB: We're 2/3 of the way through an SEC season and a former walk-on is leading the front seven in tackles, and you know what? I ain't even mad. Good on you, Justin. Damn Good Bull to get to where you are. 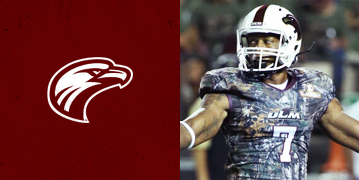 S: He's got the name of a moderately-heroic cop action hero and the resume to back it up. Leads the team in tackles and interceptions, and has also scored on a pick-six, so look for him to have 45 tackles and 9 interceptions this week. 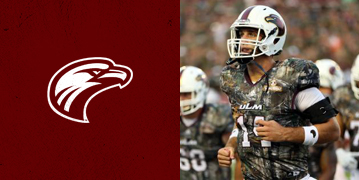 QB: The 6'35" former NC State QB has NFL LENTH like all Wolfpack QBs (except for Russell Wilson). Pete's backups have seen action in all seven games he's started, so his hold on the QB1 spot seems about as tenuous as an Aggie fan's sanity at this point. 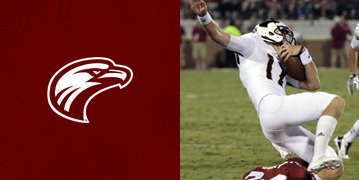 K/P: Ahh, the iron man specialist is a rare breed these days. Manton has over 50 punts this year with a 42+ yard average and also has hit on 8/10 field goals. He performs the kickoff duties too, because that's how you roll when your mom is named "Fancy". 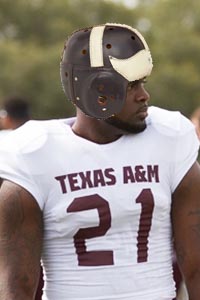 In the worst kept secret ever department, Adidas will likely be unveiling throwback uniforms to go with all of the retro swag they have produced this year honoring the 1939 National Champion Aggie football team. If there's anything that everyone on the internet loves, it's experimental Adidas uniforms! Leave the ClimaCool at home, haberdashers. If the Ags come out in anything less than leather helmets, iron cleats, and actual wool sweaters over their pads then this will be a huge disappointment. 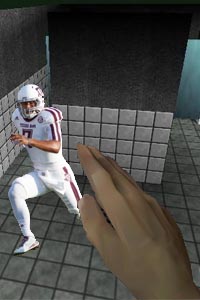 The coaching staff made it clear during the bye week that all positions were open for competition, prompting freshman QB Kyle Allen to ask Spavital "Is this for real?" It is real, Kyle, and it’s spectacular. Rumors about the format of the QB competition include drills, punt-pass-kick competition, locker room jousting, and the first to collect 10 tags from Nickelodeon’s Fun House. Other experts have selected the only format worthy of the reward. The only problem is we all know that Kenny is a screen-watcher. That's a bitch move, bro. 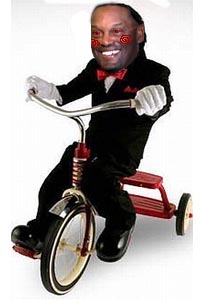 It's that time of year when we trot out all the classics:

"It was a dark and stormy night. The cornerbacks were lined up with a 15 yard cushion to the receiver. Mark Snyder blamed A&M’s inability to tackle on rules about contact during practice. Just over one month ago everyone was worried that SMU would hire away Jake Spavital. ULM just lost to a Dennis Franchione coached football team. AND WHEN THEY GOT HOME THEY FOUND A WHEEL ROUTE HANGING FROM THE CAR DOOR. AAAAAAAAAHHHHHHHHHHHH!" 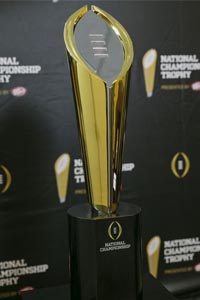 The World’s Largest Outdoor Cocktail Party this year will not be incredibly compelling and a pageant of the best of what college football is all about. Instead, this matchup will at least have a haunting, disconcerting quality like watching a possessed shoe salesman with a flensing knife hack through a pile of corpses only to snap out of it and realize to his horror that he has been in Jacksonville this whole time. Watch this game, because a coaching tenure like Will Muschamp's requires men of strong constitution to retell the story to their progeny once it has passed. You are the Speaker For The Dead.

Top ten SEC matchups are becoming a bit blasé these days so now the conference has moved on to playoff matchups. It appears that the Playoff Selection Committee awards style points for losses, granting Ole Miss a playoff spot in their first ranking despite (or because of?) the Rebels' playcalling in their loss to LSU last week. Now Dr. Bo and his backup nurses are taking on the Tigers in a struggle to remain in the race for the SEC West. This is the Aggies' Ghost Of Defeat Past and Ghost Of Defeat Future playing right before our eyes. If we change our miserly ways, just maybe Tiny Tim will get to eat a fine Chicken Fried Hot Dog this year. 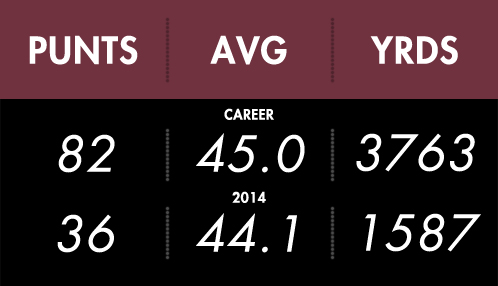 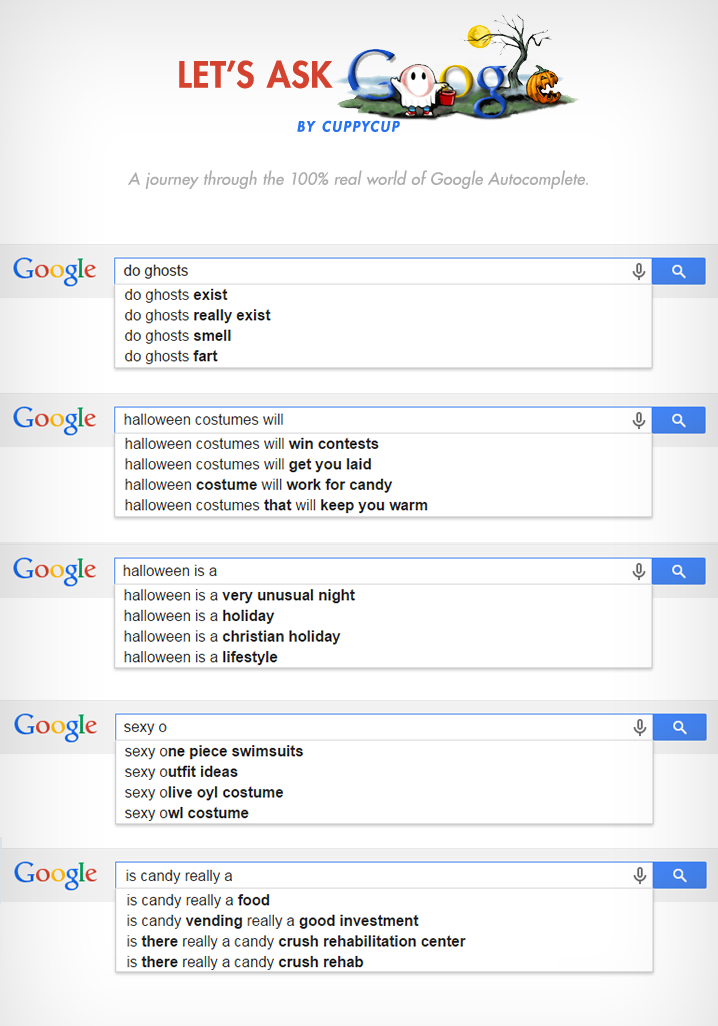 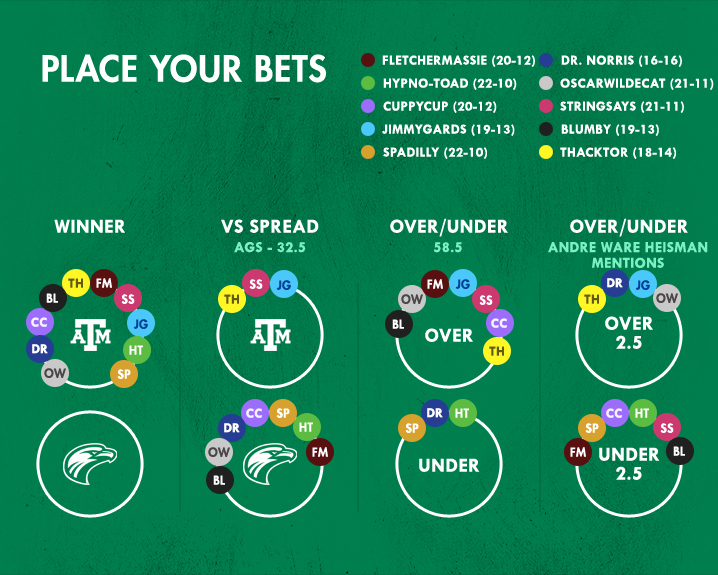 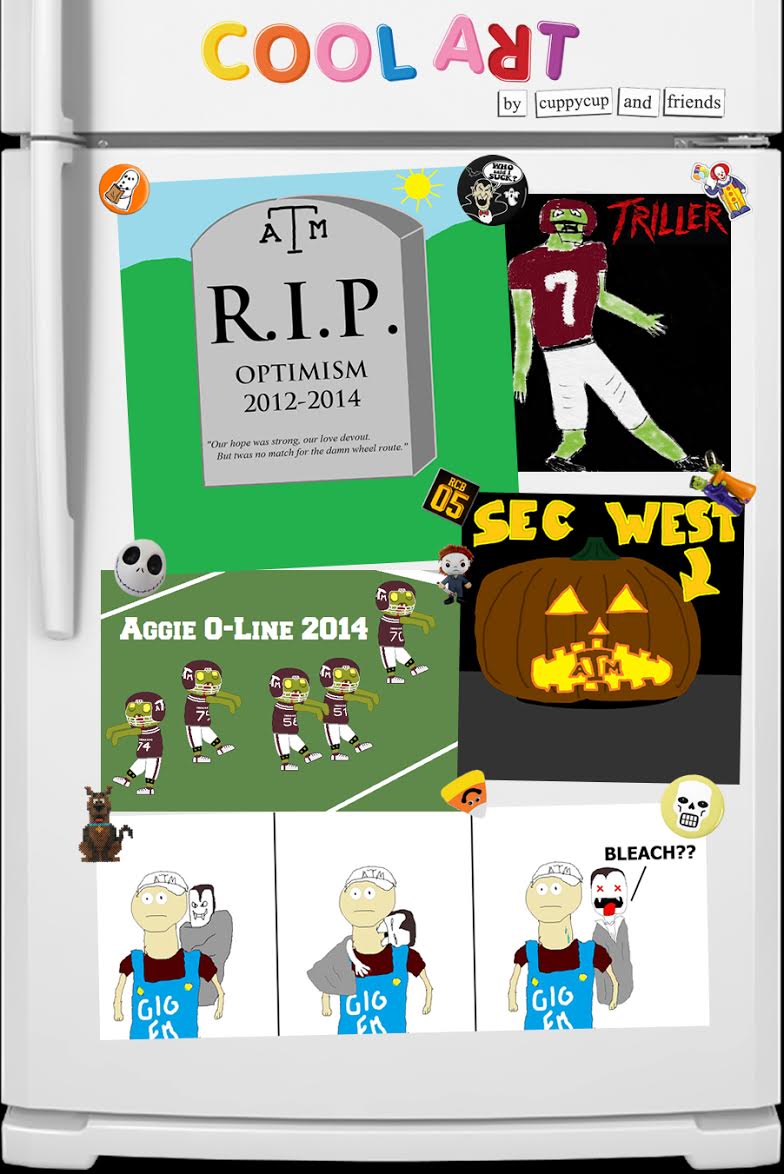 Thanks to this week's artists @rcb05, @SpreadsheetAg, @HypnoToad03, and @telcoag. 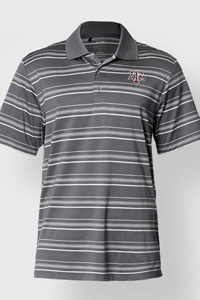 How To Look Sweet

It’s Halloween week and we have MOUNDS of hope that Aggie Football will lose the BUTTERFINGERS and quiet the SNICKERS from our rivals. If the offense can connect the DOTS, we’ll have GOOD & PLENTY of reasons to KISS our dates. Nothing to wear NOW AND LATER? Don’t be CRYBABIES because the PEEPS at Aggieland Outfitters are LIFESAVERS who will help you look like 100 GRAND.

You’ll be a BIG HUNK wearing AO’s Adidas PureMotion Golf Polo. Don’t wait for PAYDAY to ROLO down to the store for a shopping SPREE. TAKE 5 to enter our contest today. Won’t you be a JOLLY RANCHER if you win? WERTHER’S a will, there’s a way.

Text GOODBULL to 55000 with your WHATCHAMACALLIT on 10/29 for a chance to win a polo from Aggieland Outfitters.

The 12th Man is amped to see a big win, and brings its collective hangover to Kyle Field. The anger spewing from a 30,000 person strong Northgate Halloween Hangover pulses from the stadium and becomes contagious. The Warhawks have felt hangovers before, but not in such a concentrated stream of rage. Having become insta-hungover, they don't even come out of the tunnel, forfeit, and the Aggies get another bye week.

Beat a Sun Belt team by 2 touchdowns in a sloppy effort. Customer 17 throws the winning touchdown pass, but is injured with a late hit, knocking him out for the season. I still like football. Regardless of the outcome. 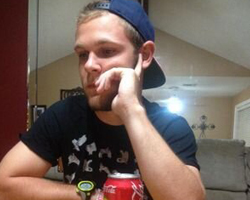 Do Aggie ghosts hiss when they try to scare people? #GBHTailgate 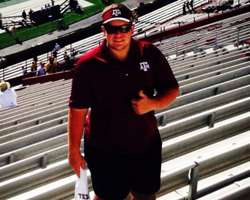 After 4 bye weeks I’m ready for an actual game! #GBHTailgate 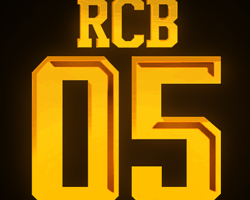 Since we’re playing Monroe, I assume Kevin Sumlin is talking in third person and referring to himself as Magua all week. #GBHTailgate 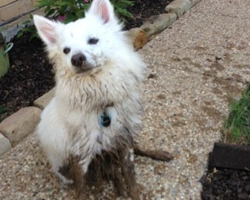 We've gone a month without a win, or as Charlie Strong calls it, a regular month. #GBHTailgate 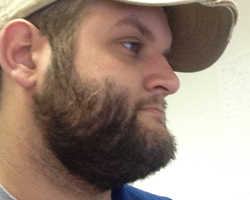 Not saying ULM players are dumb but the coach is only dressing 12 players for Saturday... The rest are dressing themselves. #GBHTailgate 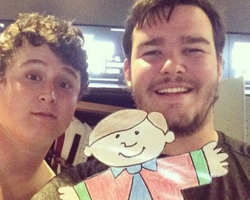 Poppa been smooth since days of underroos.