THE TAILGATE: A Graphical Preview of Texas A&M at Alabama

*tap tap* Hey is this thing still on?

Well Ags, the past two weeks haven't been pretty. We're packing up our things and never thinking about the State of Mississippi again.

Our path forward lies in the State of Alabama where we boast a perfect 1-0 record against the Tide.

This is the game where we turn it all around.

It's time to TAILGATE in Tuscaloosa.

Share All sharing options for: THE TAILGATE: A Graphical Preview of Texas A&M at Alabama 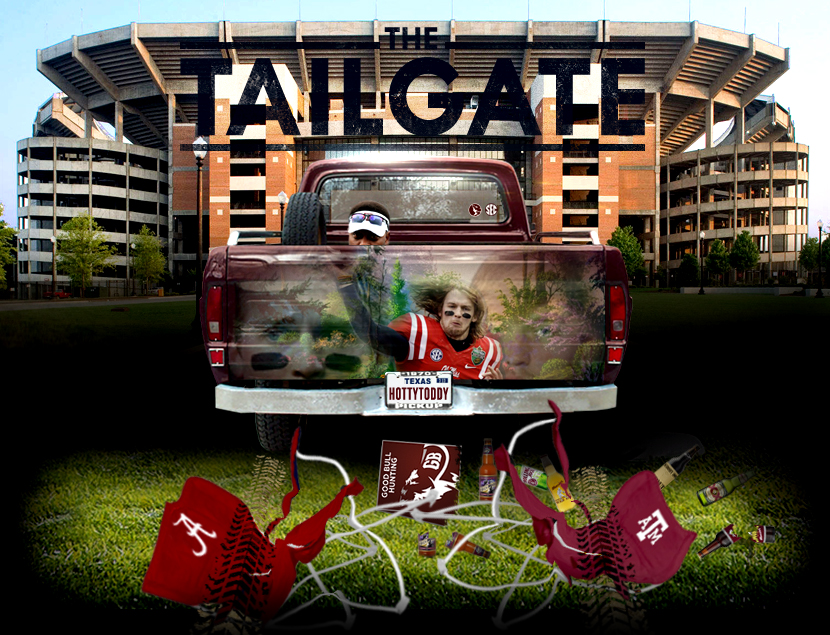 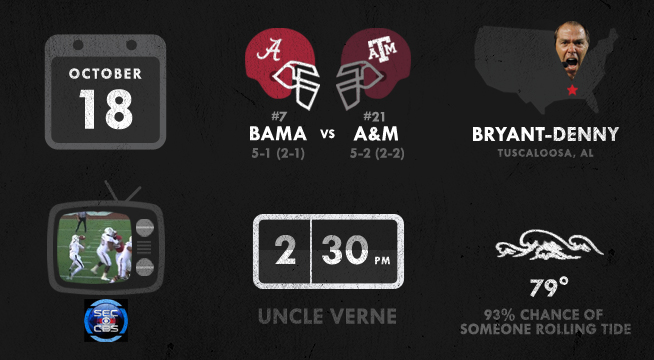 This is not last year. This is not two undefeated teams colliding at Kyle Field to slug it out. This is now. The state of Mississippi is 3-0 vs the teams playing at Bryant-Denny Stadium this Saturday, and that's just not how anyone drew it up at the beginning of this season. Well anyone not named Dan Mullen, who is being openly courted by Gator Fans at this point in time. Take your time on that site, I'll be here when you get back.

Nick Saban is coming into this game pissed off. He's pissed off for good reason, as his fans were not necessarily thrilled with a one point victory last Saturday. I've never heard of Alabama fans getting angry about something for no real reason, have you?

Now, if I'm scouting Alabama (and I'm not), I'd probably listen to Dee Dee Bonner's son and cover the snot out of Cooper this week. There have been 122 passes caught by 15 different Alabama receivers this season so far - and 54 of those catches were by Cooper, accounting for 44% of all pass plays. It appears that a four word synonym for "consistency" is "Lane Kiffin, Offensive Coordinator."

Kevin Sumlin is staring at his Nick Saban voodoo troll doll with great anticipation. He acquired this doll last year on the way out of Death Valley from a voodoo shaman, just in case. The troll doll isn't complete just yet, though. He has to take it out of its wax sealed acrylic box and say the chant. Sumlin breaks the seal and begins...

Just as the last "L" in "PAWL" fades into silence, a massive bolt of lightening strikes the troll doll, charring only the ends of his little crimson troll hair. Sumlin reads the instructions aloud...

"You are allowed one wish and one hex. Choose wisely and end with the chant of the south." Sumlin reads. "OK. I wish for a 17 point victory and hex Saban to shart himself in view of the cameras on his way to the post-game handshake."

Sumlin, satisfied, almost sets the doll down. "Shit!" he thinks to himself. Sumlin takes one last contemplative deep breath and chants "PAAAAAAWWLLLLLLLLLL" one last time. The doll turns to dust, wish granted.

Finebaum callers have long been a bountiful source of entertainment, but few realize just how long. There used to be a modicum of civility in a more refined age: 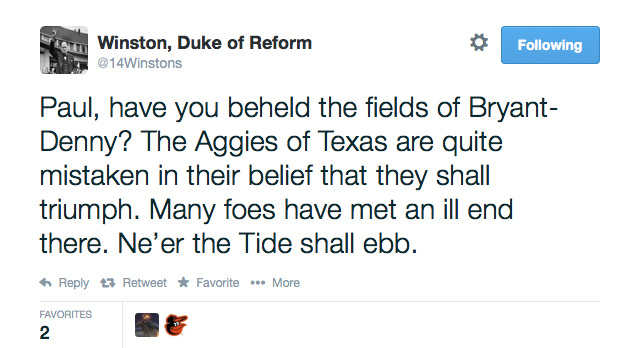 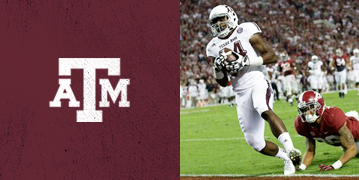 WR: Finally healthy after missing 2 weeks with a dinged-up shoulder. MK wrote his first SEC calling card in Tuscaloosa back in '12 when he snagged the game-winner. We'll need a healthy dose of Malcome over the middle if we're going to have a chance to repeat. 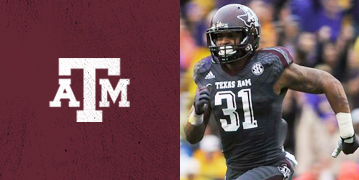 S: Howard, this could be your swan song. We're talking 15 tackles and a turnover. All we need you to do is pretend that you're a linebacker and maybe occasionally cover a tight end. You know what, don't even worry about #9. If you somehow find yourself alone around him, just tackle him immediately regardless of the situation. 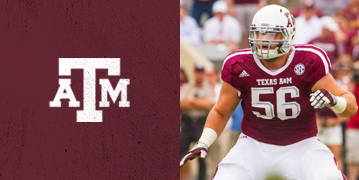 C: Get those high snaps down and those calls made early. Take note of Bama's center philosophy, which is decidedly un-Trill. We'll need that Matthews steadiness back, so get a little bit mean this week. Trey DePriest just said something about your hair. 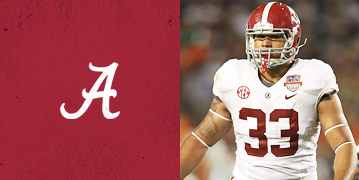 LB: He didn't really say anything about Mike Matthews' hair. That we know of. (Nor should he, for that matter.) The latest in a long line of Saban LINEBACKERBOTS, he's primed to rumble off the production line into NFL readiness at season's end. Let's expose some human-like flaws if possible. 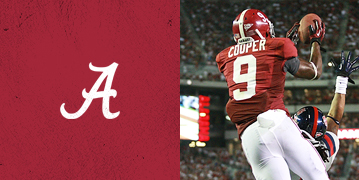 WR: Shit. This guy's on pace for approximately 7,000 receiving yards and 44 touchdowns this year or something. Our only hope is that Blake Sims is not polished enough to make that back-shoulder throw on go routes. What's that? He's so unpolished that he might make them unintentionally? Double-shit. 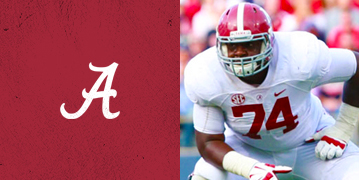 LT: His duel with Myles Garrett could be the greatest matchup of the game: two top-rated recruits playing key positions as true freshmen just hammering each other all day. Both are physical freaks, but while Cam's physicality is unquestioned, Myles holds a distinct edge in the freakiness department. 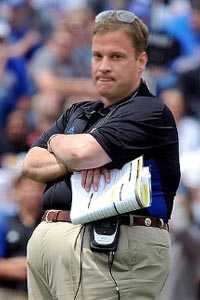 Last week's melatonin-producing offensive performance by the Crimson Tide has left Alabama fans wondering if hiring the failed former head coach of their conference rival was the best course of action. Lane Kiffin will be out to prove against the Aggies that his offense is at least marginally more effective than Saban's backup plan of punting on first down and subsisting exclusively on defensive fat guy touchdowns. Kiffin is an inexplicably sought after coaching commodity who is believed to be an offensive mind despite a dearth of supporting evidence, which means that soon he will be fired from the head coaching job at Kansas. 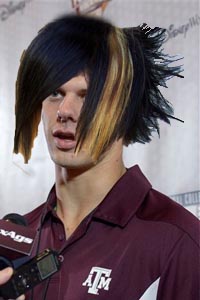 Last week Alabama barely squeaked out a victory over Arkansas, the same team that A&M needed overtime to put away. Alabama’s only loss this season was to the same Ole Miss team that just pantsed A&M in front of 110,000 of their closest friends and family. Are these closely-matched teams, or are the Aggies in for another swirly from an SEC West bully? What does all of this mean? What does anything really mean? The Aggies are one conference blowout and a hair dryer away from being full emo about the rest of this season. 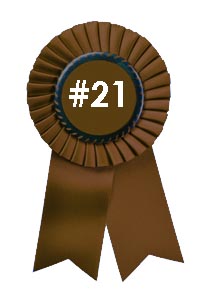 Well, not exactly. More like the expectations we actually had coming into the season. The Aggies were originally projected to finish 6th in the SEC West, and despite what the Facebook comments suggest we still are capable of even better than that. Do something twice at A&M and it is coincidence, three times and it's tradition. For two years in a row the A&M vs. Alabama matchup has been a pants-off hootenanny of a ruckus of a barn-burner. If the Ags can pull off the upset then Bama fans will no longer be able to chalk it up to Manziel magic and we may witness the birth of a new rivalry. 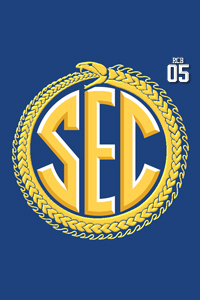 As usual you can get fired up for the highly-ranked SEC matchup between… wait - where are all the ranked teams? What happened here? A week ago the SEC West alone had 9 teams in the top ten, now we have… unranked Mizzou @ Florida?

The bourgeoisie will probably be watching #10 Georgia @ Arkansas, a game that promises to have enough dives, counters, and punts to be in the B1G. True connoisseurs (read: hipsters) will ironically choose Furman @ South Carolina, the Pabst Blue Ribbon of college football. They’ll tell you it’s so bad it’s good but it’s actually just bad.

The real entertainment will be Kentucky @ LSU. The Wildcats have caused a lot of problems in the East by taking Florida to the wire and collecting on the token win that South Carolina seems to give out for free this season. Meanwhile the Tigers are a minivan left in drive in a Target parking lot on Sunday - not actually threatening, and yet no one can seem to figure out how to stop it. 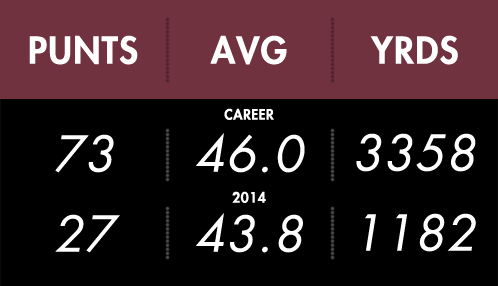 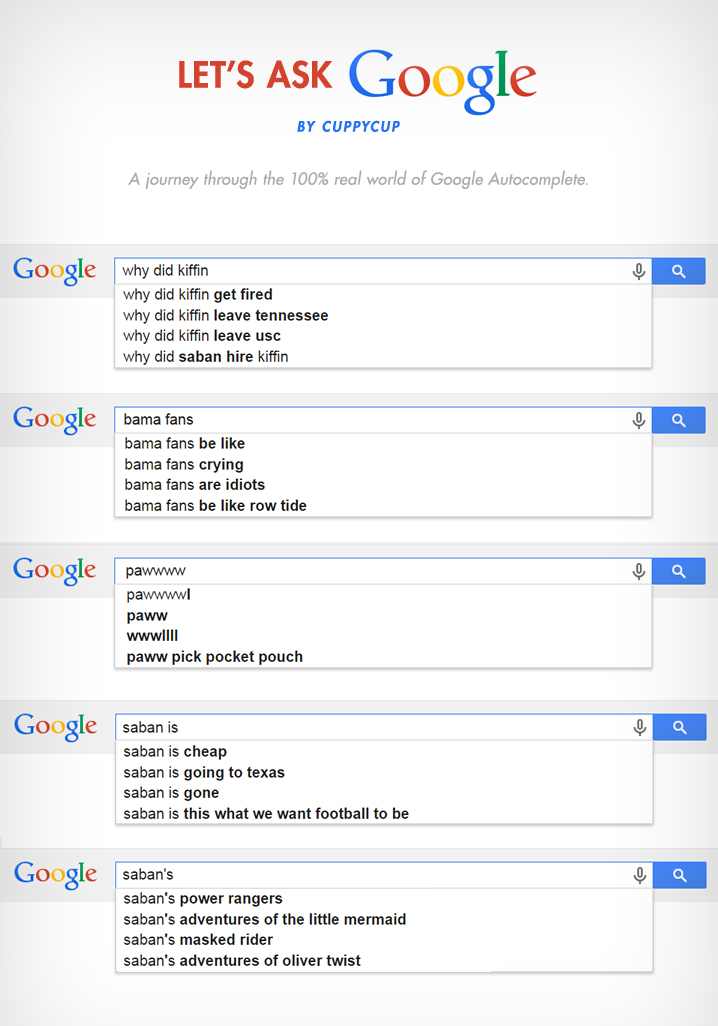 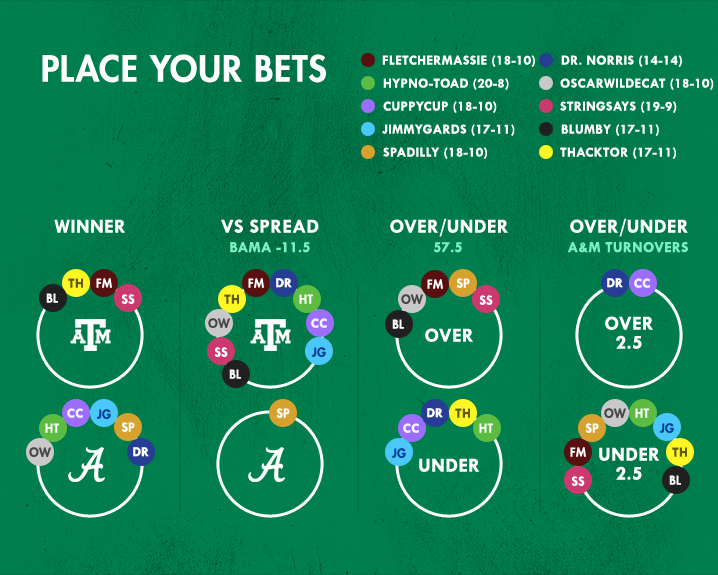 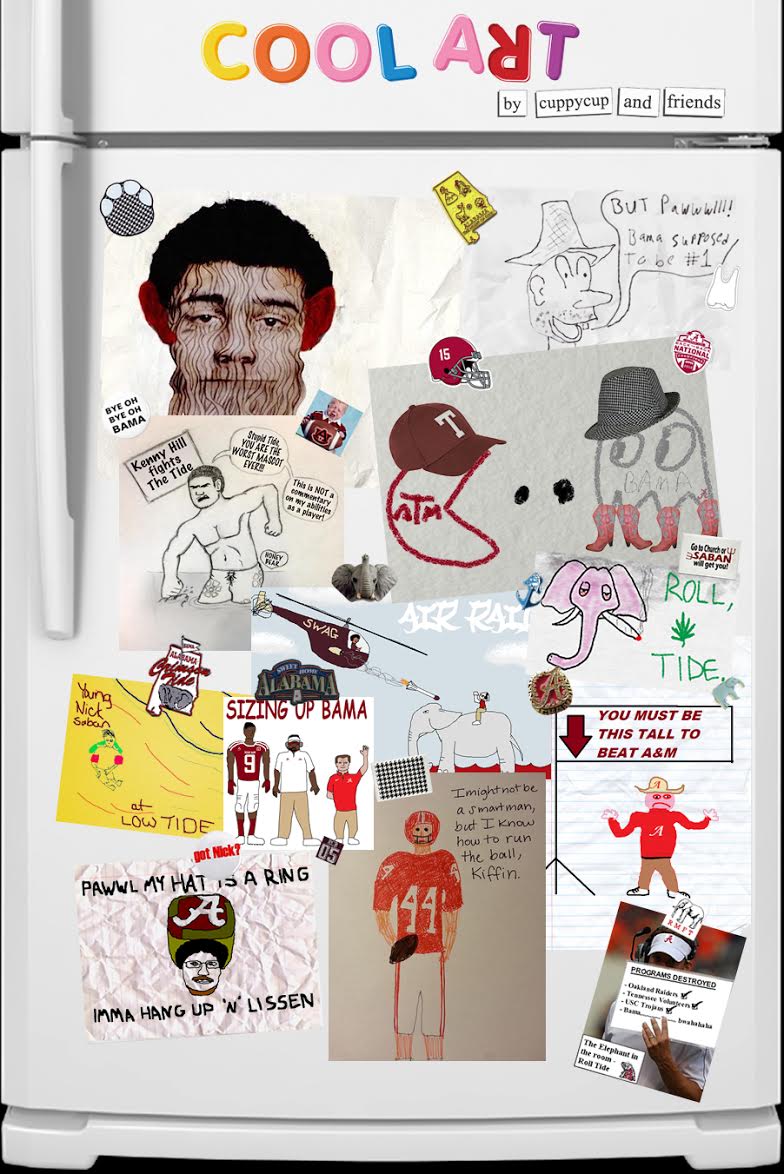 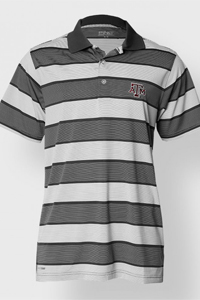 You’re not ready to wear maroon yet? Okay, we can work with that. This groovy Ping "Dance Floor" polo from Aggieland Outfitters is restrained but relaxing. The Texas A&M logo is embroidered on the chest as it should be on most of your wardrobe. This shirt says "Hey, I’m resilient enough to get back out there and dance" or "Dear Alabama, please don’t dance all over my limp body."

The shirt’s color is "FORGED IRON" and let me tell you some of its mechanical properties. Forged iron is durable even though it has been hammered (by Mississippi, for example). Forged iron is harder than wrought iron and less likely to crack when struck (by Mississippi, for example). Iron is a transition metal which probably has nothing to do with freshmen playing on defense, but I think you see where this analogy is going. Finally, you can’t spell Ricky Seals-Jones without "iron."

Text GOODBULL to 55000 on 10/15 for a chance to win a striped polo from Aggieland Outfitters.

I remember two weeks ago where the Best Case Scenario just wrote itself. I could have typed anything in here like "Kenny Hill time travels from the Miss State game into the endzone of every subsequent game, then back to behind the line to throw a TD to RSJ for a 21 point lead" and all of you would have bought it. Here's the best case scenario: a complete, mistake-free football game. And Saban visibly sharts when jogging out to the post-game handshake.

The bottom just falls the hell out. Turnovers, injuries and locusts descend upon our team. Sumlin decides to leave the world of football behind to pursue his lifelong desire to be at one with the Tao. You can find him contemplating nothing being everything in his Zen garden most Saturdays now. I take up freebasing Pop Rocks because I'm not cool enough for a Meth addiction anymore. 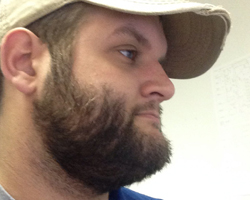 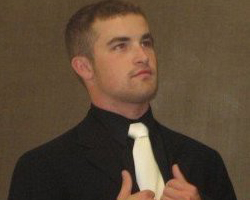 We don't have to play anyone from Mississippi again, right? Oh, just Alabama? Okay, great. #GBHTailgate 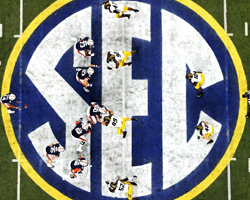 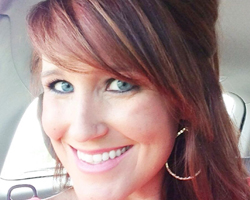 Tried thinking of a creative #GBHTailgate tweet. But modeling our play calling lately, I went with something with no actual point to it. 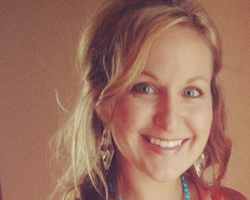 I'll wear houndstooth socks all week just so I am doing my part to walk all over bama fans. #GBHTailgate 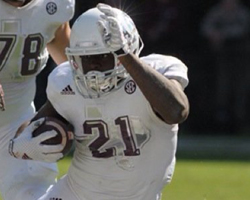 Praise and blame is all the same.