THE TAILGATE: A Graphical Preview of Texas A&M at Mississippi State

The undefeated Aggies go on the road to take a shot at starting 6-0 and becoming the first bowl eligible team in the country.

After last week's thriller I'm ready to ride into the #SnowBowl, throw all my money on black (uniforms), and ring their bells.

I got a fever and the only prescription is...

Share All sharing options for: THE TAILGATE: A Graphical Preview of Texas A&M at Mississippi State 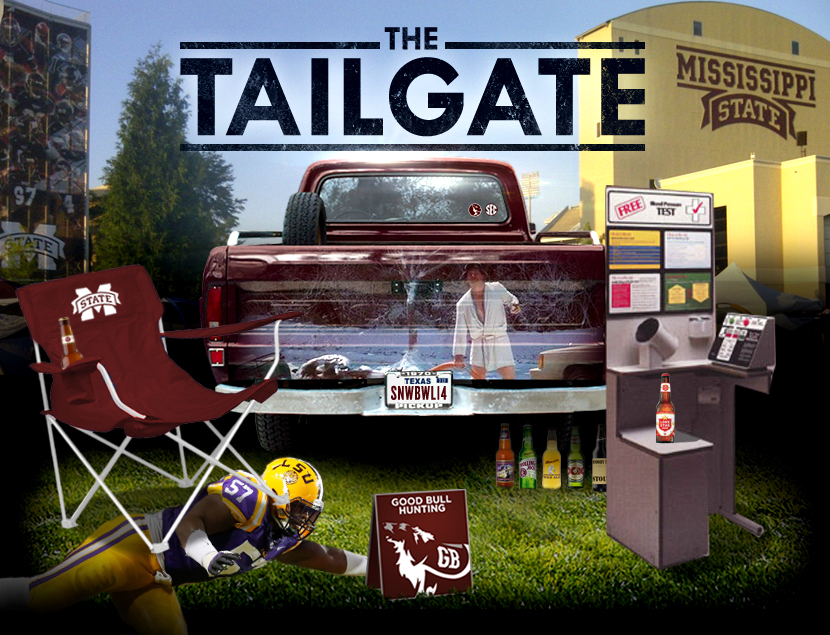 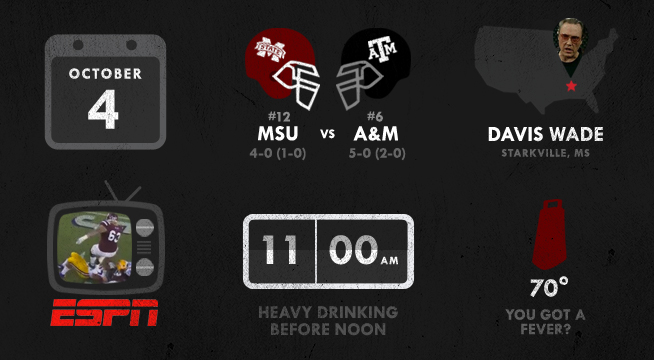 How's everybody doing? I'm sure at this point we've all been to the doctor, gotten our heart medication and anxiety pills refilled, and continue to drink heavily despite that doc's wishes? Well, if you had a near coronary last week, it might be high time you get your affairs in order before Saturday's game, because this one may be a doozy.

But enough about how this season could leave us all feeling like Westley after his bout with The Machine, I'd like to talk about how Mississippi State fans are bravely lining up to support a noble cause. What cause, you ask? Well, they're supporting offensive lineman Dillon Day who is currently serving a suspension for allowing the laws of inertia to take hold of his giant form and accidentally guide his feet to sensitive regions of LSU players. Or he stomped the shit out of them. I'm not one to tell you what to think.

Some causes encourage you to walk and wear pink. Other causes encourage the growth of facial hair for a month. This cause? Well this cause encourages fans to unite and show support by getting fake sleeve tattoos and wearing them to the game. I don't know if I'm giving this the credit it deserves, so here's a choice line from "Maroon and White Nation" to really drive the point home (thanks, String):

How would it look on the SEC Nation broadcast if 60,000 Bulldawg fans turned out for the Texas A&M game wearing fake tattoo sleeves like these in support of Dillon Day? They’re easy to find and don’t cost much.

How would it look? Probably like the a giant group of easily spotted undercover agents attempting to get in with the Hell's Angels. That's how it would look.

Kevin Sumlin politely requests that 3 large canvas bags be brought out before the pregame speech and placed in the center of the locker room where all the players can see.

"You will want to silence the fans by taping their mouths shut. You may fantasize about cutting out their tongues, but sadly that is assault and battery and we don't do that here at A&M. We did do the next best thing, though." Sumlin continues, patting the top of one of the canvas bags.

"We cut out the tongues..." Sumlin pulls out one of 60,000 clappers from the canvas sacks "OF THEIR LOUDEST FANS!"

In solidarity to our brethren of the Land Grant College of Mississippi, we submit our Sleeves for Dillon. 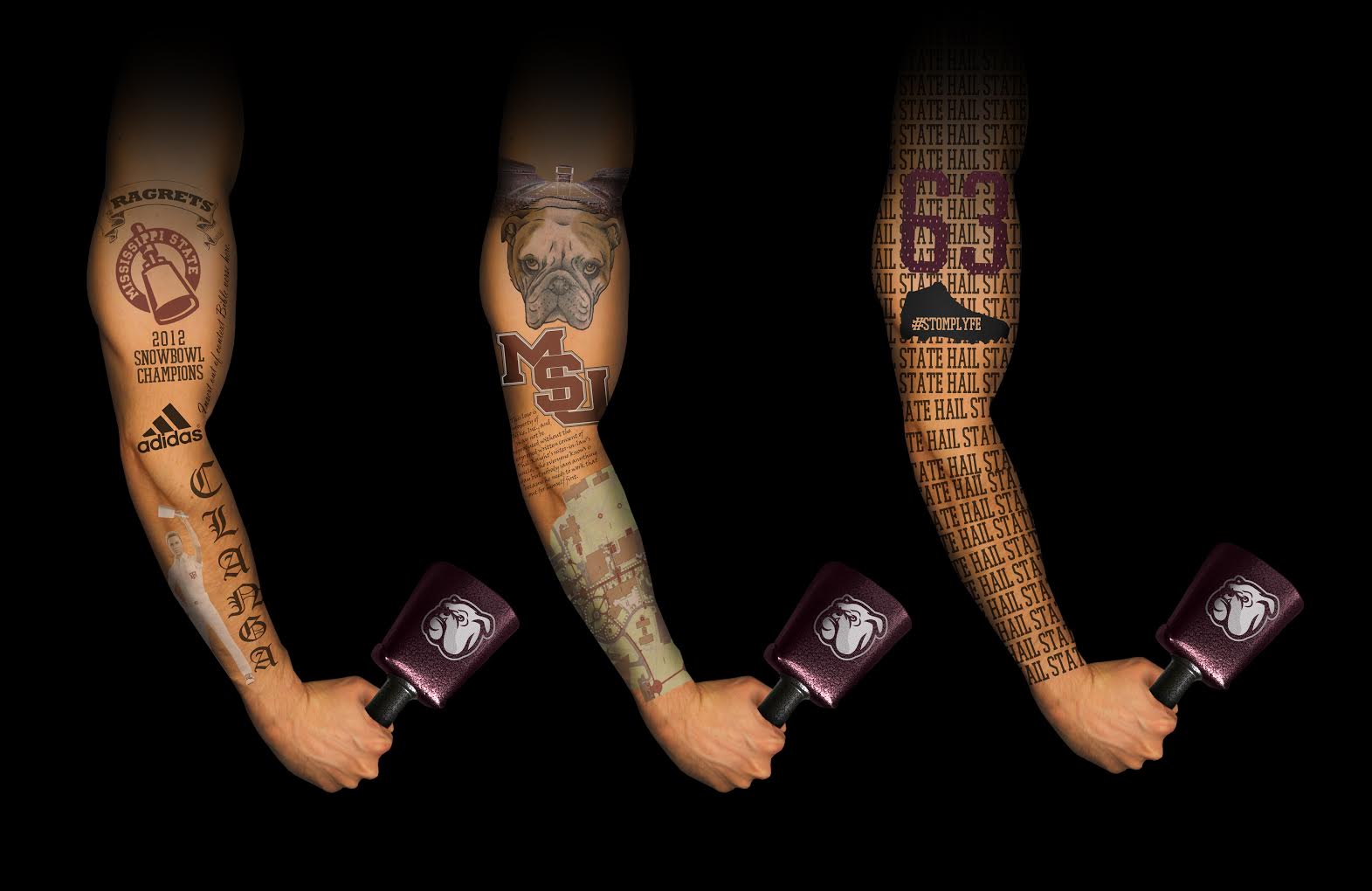 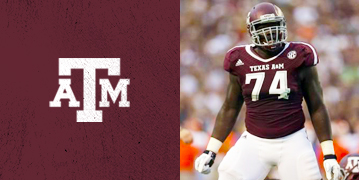 OT: Mississippi State's defensive line is the Arkansas offensive line of SEC West defensive lines. Or something. Whatever, they're damn good and will give us a lot of looks, so with Ced anchoring one end Germain will need to be stout at the other to protect Kenny. 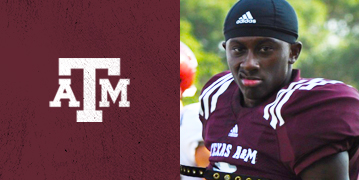 CB: #1's first full game back last week was mostly played in run support, so it will be key for him to be back out in space where he's comfortable against some pretty good receivers. 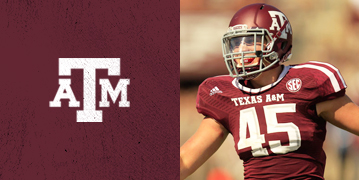 LB: Dak Prescott is the most complete QB we'll see all season. It's going to take the right recognition and calls to keep him somewhat contained. And tackling, too. That part's pretty important as well. Let's do that. 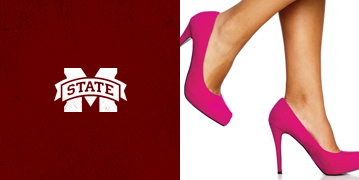 What footwear will #63 be sporting on the sidelines? Cross-trainers? Crocs with socks? Alligator skin boots with Wranglers? Or just a big ol' middle finger: some muddy-ass size 15 cleats? 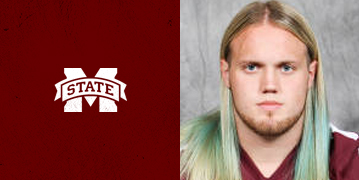 Unfortunately, this rabbit-hole goes even further. Dillon Day is a man of many parts, apparently. And that body of work is long, if not necessarily distinguished. 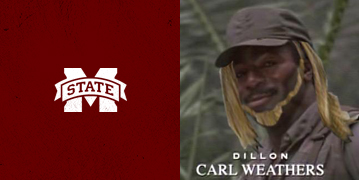 Do centers hold clipboards on the sideline? Because the SEC's got him pushing some pencils this week. He's got to bide his time until he can get to the chop block next game. "Hold it, Dutch...I'm going after Dak!" 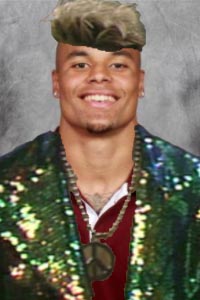 Dak Prescott will add a new twist for our defense as he brings the QB run attack along with MSU’s significant passing game. With 378 rushing yards in his first four outings Dak is well on his way to breaking the 1000 yard mark this season – and he has managed to do that while still throwing 11 TDs through the air. Now Southern Miss was able to contain him, so – wait, can that be right? [checks notes] Well I’ll be damned, Southern Miss was able to contain him. OK defense, in spite of everything you’ve been trained to do, um…. be more like Southern Miss.

Either way guys, I know we’ll always be friends forever. 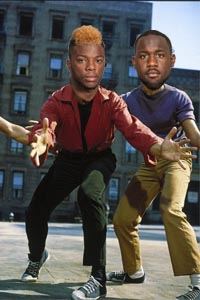 These A&M tackling woes are so late-Fran-era, y’all. Unlike the Ohio State coaching staff, our defense succeeded only in solo tackling the air for most of the game before rediscovering gang tackling late against Arkansas – and fortunately it was enough to seal the deal in OT. Our defense is definitely not the biggest bunch on the block, and if they plan on stopping these bone-crunching SEC West teams then they’re going to need to keep tackling by committee. Watch out for those punters, fellas. I hear they can be pretty tough to bring down, what with being raised in a British penal colony and all. 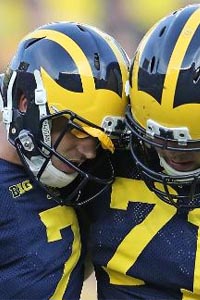 Early in the game last Saturday RB Brandon Williams got his bell rang pretty good. Texas A&M trainers took his helmet and made him sit out the rest of the game as a precaution against the dangers of concussions BECAUSE THAT’S WHAT DECENT HUMAN BEINGS AND A GOOD COACHING STAFF DO. Mr. Williams was less than pleased with his removal from the game, and as our intrepid analyst Ranger222 noted it seemed to throw some of our offensive game plan out the window. Though technically he is only listed as "probable" for this weekend, look for the explosive Williams to get back to proving why he is the best of a VERY good stable of A&M running backs. 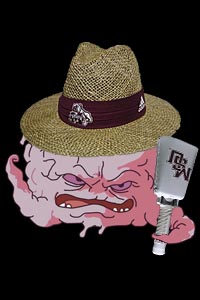 Honestly with all of his obligations in New York there’s no good reason he would be there. I don’t know why people keep bringing it up. 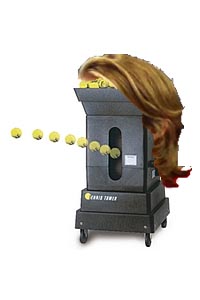 Git yer pants off and git comfortable people, cuz we got ourselves a weekend. THERE ARE THREE TOP 15 MATCHUPS FEATURING EXCLUSIVELY SEC WEST TEAMS.

OK maybe you should put those pants back on, at least until you calm down a bit.

First Dr. Bo and Mr. Freeze of #11 Ole Miss host The Great Saban and his #3 Alabama squad. Bama is the only team in history that can simultaneously grumble about how new fangled gimmicky offenses something something is this what we want football to become something something while also quietly racking up 42 points per game so far this season. Ole Miss isn’t far behind on the offensive production, which is accomplished mostly by QB Bo Wallace firing passes in arbitrary directions and trajectories like a tennis ball launcher on a lazy susan. But he’s beautiful and I love him and shut up.

Later that day #15 LSU, fresh from kicking the shit out of the Aggies, will head to #5 Auburn to find out which Tiger team is truly GRRRRRRRRRROOD ENOUGH I GUESS. These SEC West matchups give you the feeling of being a Roman gladiator watching the fight before yours. Everyone else is very entertained, but you’re just waiting to see which one of them will survive this fight in order to try to kill you next. WE WHO ARE ABOUT TO DIE SALUTE YOU. 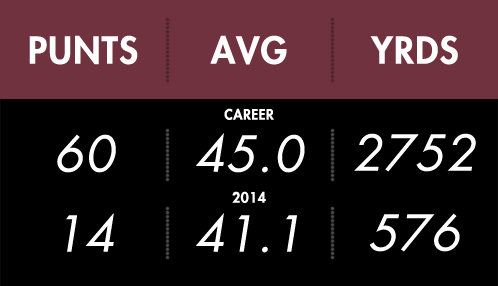 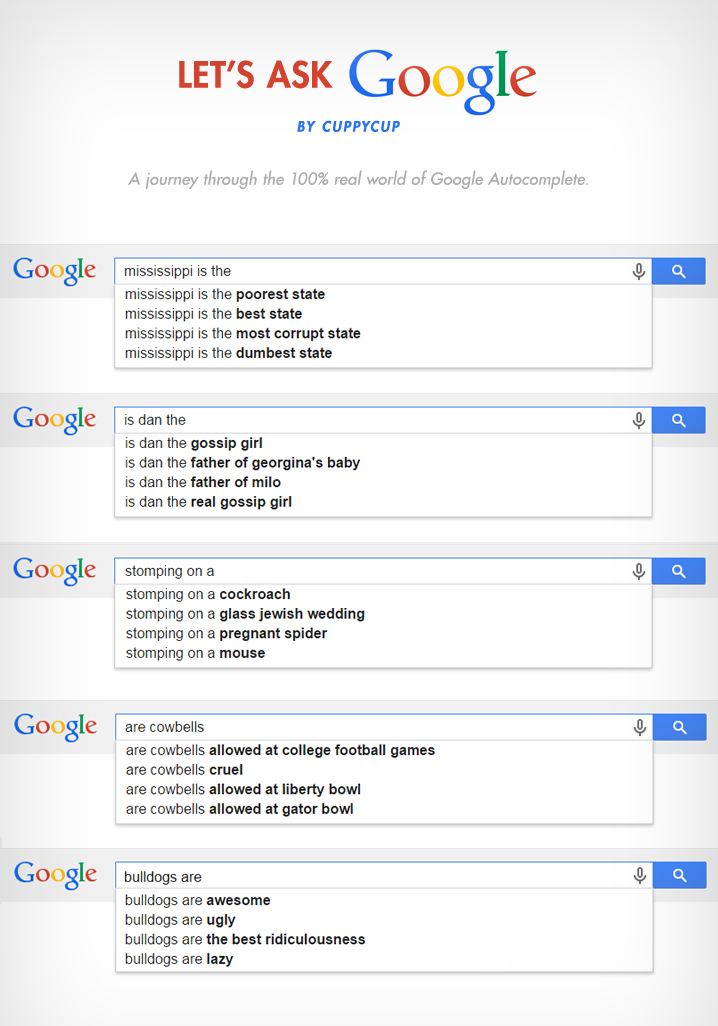 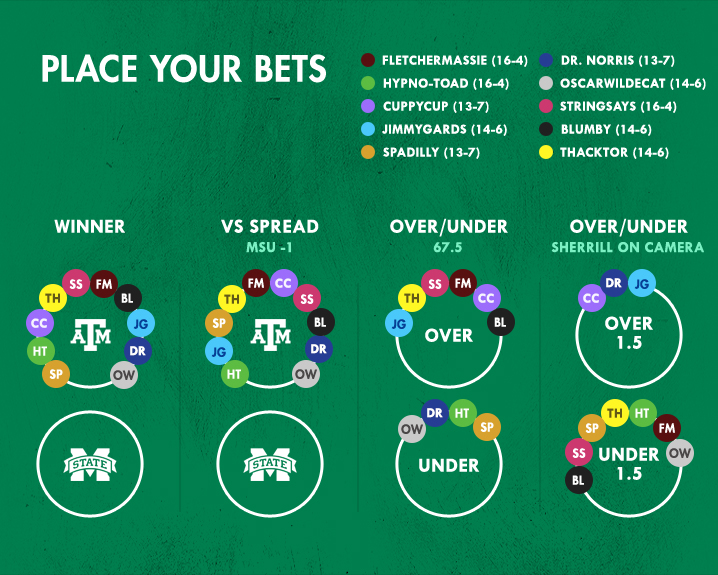 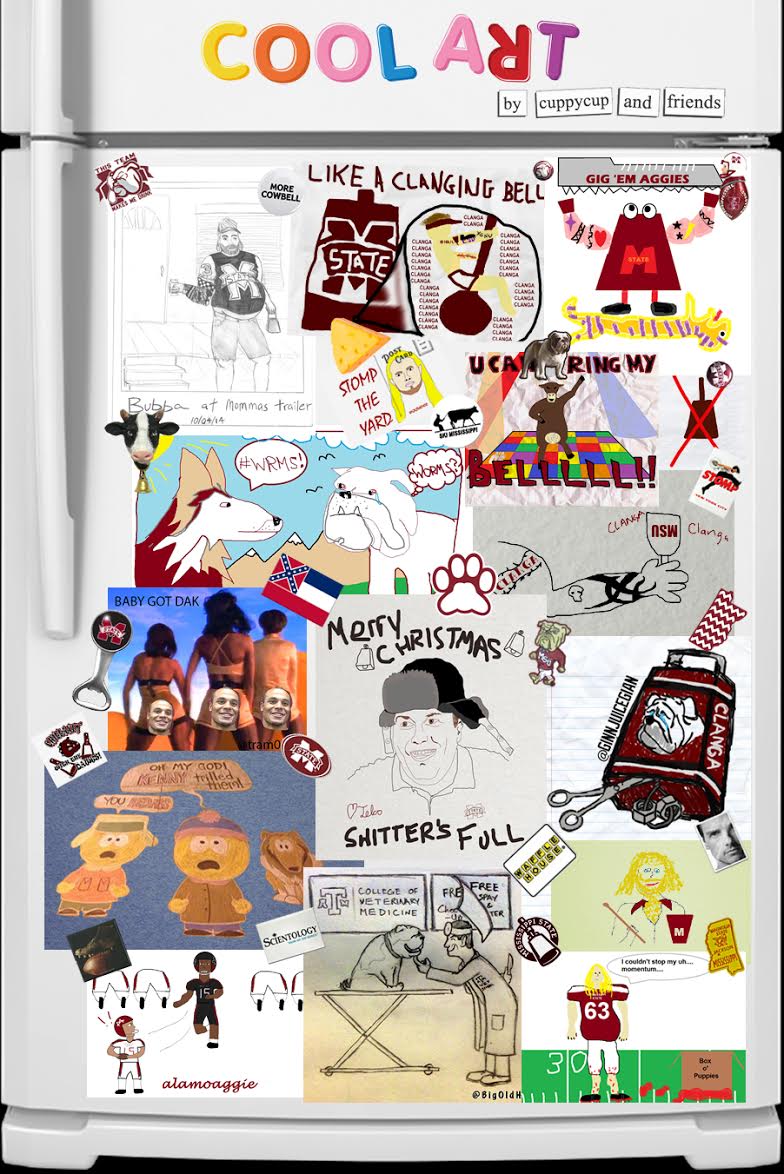 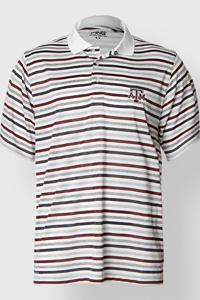 Be the #1 Starkville Attraction

According to TripAdvisor, there are a grand total of 7 attractions in Starkville, Mississippi. By purchasing and wearing this striped Ping "cannonball" polo from Aggieland Outfitters, you will assuredly claim the top spot as the Eighth Wonder of Starkvegas. Among attractions you’ll leapfrog are The Pita Pit, Bulldog Lanes, and Dave’s Dark Horse Tavern. That is seriously all Starkville has to offer, go see for yourself. Let’s sample the reviews you’ll be competing with:

The Pita Pit: "Similar to Subway"
Bulldog Lanes: "Not for those looking to have fun with their son"
and forthcoming?
Aggie in Striped Polo: "Good shirt but body shaped like cowbell"

Text GOODBULL to 55000 on 10/1 for a chance to win a striped polo from Aggieland Outfitters.

You know what, give me a repeat of the 2012 game. Black unis and everything. I'd freaking love that. The Best Case wishlist for this game? No dropped passes, two Myles Garrett sacks, 3 defensive turnovers, 400 yards passing for Kenny, and a punt return for a touchdown by Speedy. Let's do all the things. 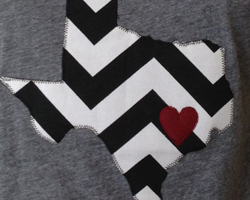 What do Miss State grads & tornadoes have in common? Both move from place to place, but they all end up in trailer parks. #GBHTailgate 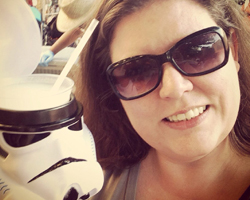 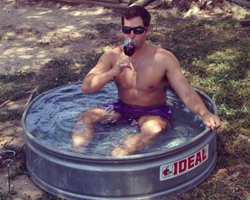 No Mississippi State that ringing in your ears is not the Cowbell. It's Myles Garett hitting you between the teeth. #GBHTailgate 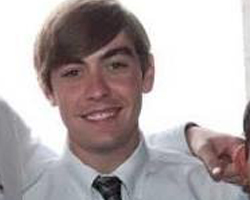 It's a real shame Dillon Day won't be able to play at his old stomping grounds this weekend. #GBHTailgate 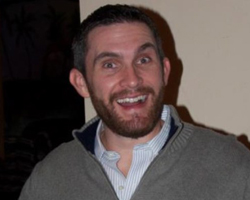 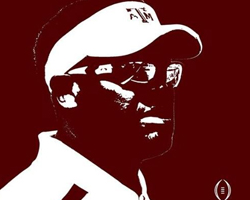 Trying to tweet a joke to land on the #GBHTailgate but I just can't put my foot on it. Wait....