THE CHAMPIONSHIP: A Graphical Preview of Florida State vs Auburn

It's time. The last game of the College Football season in upon us. I can honestly say this has been some of the most incredible football I've ever witnessed.

Will FSU break the streak of SEC National Champions or will Auburn take it to 8?

We'll find out tonight if Auburn can channel some more magic as we prepare for The Final Kickoff.

Share All sharing options for: THE CHAMPIONSHIP: A Graphical Preview of Florida State vs Auburn 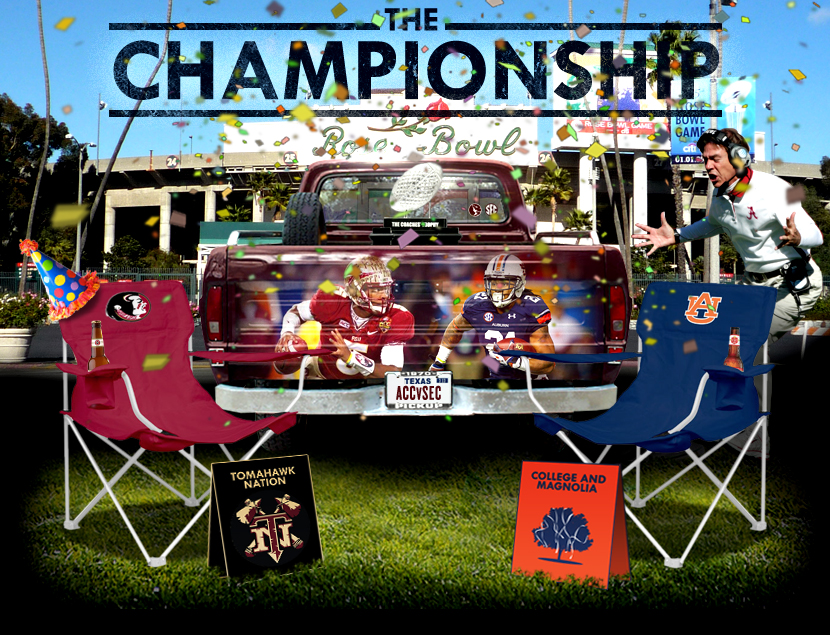 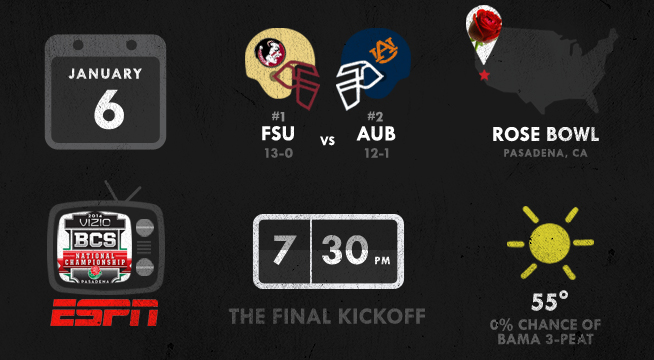 So here we are, the National Championship game. The last one before people have to play TWO GAMES TO WIN IT ALL OH THE HUMANITY! I couldn't be more excited to move toward a playoff format, mostly because it means there's more meaningful college football to watch at this time of year instead of the Farmersonly.com Ranch Mating Bowl. That one was a barn burner, though.

But now it's here. The SEC Champions from Auburn are going to take on the ACC Champs FSU and their bright and shiny new Heisman Trophy winning QB. We're happy to have a couple of guests who actually know a thing or two about these teams to write about this upcoming contest. If it weren't for them, you'd have to read more paragraphs of me making stuff up, and nobody wants that.

Our friends from Tomahawk Nation and College and Magnolia have agreed to write separate game previews to give us a fair and balanced account of the National Championship game. I'm personally glad that they've agreed to do this as I didn't want to get neck deep in the most uninformed smack I've ever written. So, without further ado, here's The Tailgate: National Championship Edition. 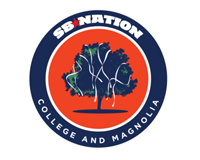 Florida State has been awfully impressive in outscoring opponents by an average of 52-10, especially when one realizes most of that has come against the mighty ACC, but the 'Noles haven't faced a team as good as Auburn or a run game anywhere near the Tigers'. The only elite back FSU went up against was Boston College's Andre Williams, and he rushed for 149 yards in that matchup. With Tre Mason, Corey Grant, Cameron Artis-Payne and Nick Marshall running behind H-back Jay Prosch and the best offensive line to play Jeremy Pruitt's defense, Auburn will be able to run for plenty of yards and score plenty of points. On defense, thanks to an eight-man rotation, Auburn employs the best front four FSU has seen. When the Tigers' D-linemen are fresh at the end of the game, they'll be able to shut the door on Jameis Winston and the Seminoles' title hopes. FSU players and fans, who all expect to win by 40, won't know what hit 'em. #FSUTwitter will be high comedy. 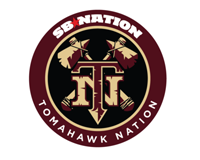 This one is fairly simple. Folks know that defense in the SEC this year was down, but what they don't know is that Florida State stole it. Auburn fans should be familiar with the concept (see Newton, Cam, and Marshall, Nick). With all that defense on FSU's side that Auburn hasn't had to face yet, it will be really tough to prepare. Also, if destiny, experience in a close game, or religion make up three of the five reasons why a team should win, pick the other side. As FSU's players said, it's not their fault if other teams cannot keep up. Of course, I'm not sure how FSU can hang with a team that scraped by squads like Texas A&M, Missouri, Georgia or Alabama after their dominant bowl performances against programs from the weak conferences. Prediction: Jameis and Co. beat down the genius-led, God-endorsed, team of destiny, WarTigerPlainsEagleMen of Auburn in a game that is close -- at the opening gun. 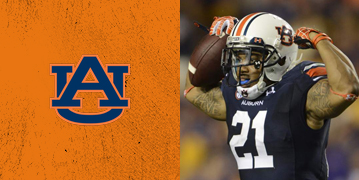 RB: Let me get this out of the way: his dad is in "De La Soul." You might hear this threeve times tonight. Don't let that distract you from the fact that Mason is a monster who ran for like a thousand yards in the SECCG. 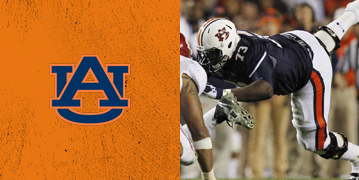 OL: This man is a beast, and he's only a sophomore. And he's from a place that is also home to one of music's greatest heroes: Thibodaux, LA. That's Amos Moses, if you were wondering. 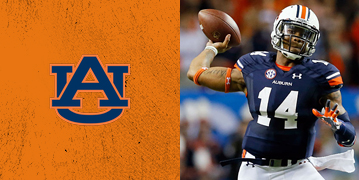 QB: What a trip for this guy. Played DB at Georgia, got in trouble, went to JC, transferred to Auburn, beat Georgia, and now he might just be the dean of the 2014 SEC QB class, assuming a certain guy goes pro. 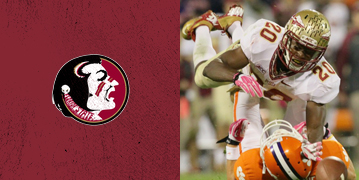 CB: OK, I had to check this but this dude has FIVE sacks on the year. He's 5'8", 190. He also has 10 total passes defended, 2 interceptions, and 3 forced fumbles. If FSU is going to stop the Tiger run game, he'll basically be an extra linebacker for the 'Noles. 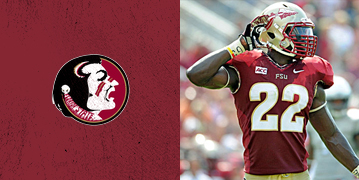 RB: It's not often that you see a guy lead the team in tackles *and* interception return yardage, but there you go. For the record, FSU finished with over 630 yards of defensive return yardage, which is over a third of Nick Marshall's passing total. 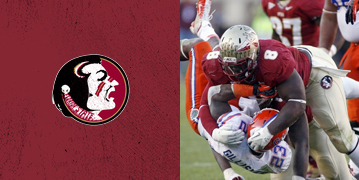 DT: The junior led the team in TFLs with 10.5, and still managed to finish fourth in tackles with 54, which is pretty good for a DT pushing 300 lbs. There's a certain amount of respect reserved here for defensive tackles wearing single digit jerseys. 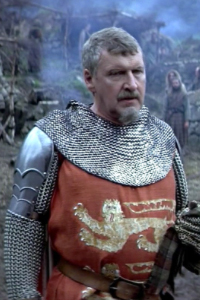 Another year, another SEC team in the championship game. Be prepared for S-E-C chants every time Auburn does anything, and ironic S-E-C chants any time FSU does. Internet forums will be vehemently anti-SEC across the board, and people from all walks of life will be rooting for the end of the SEC reign of terror. You know that scene in Braveheart where the peasants rise up and kill the magistrate because he killed Mad Max’s wife? Well Gus Malzahn owns that same cape. 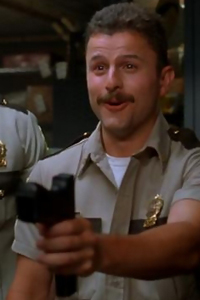 Auburn has made their case as god’s most special team this season, as they have pulled victory from the jaws of defeat through any means necessary. There has been the unlikely. The questionable. And the completely pants-on-your-head bananas.

Florida State made it to the championship by doing what they should do: beating terrible ACC teams by a lot of points.

If FSU wins, expect it to be behind a strong performance by Heisman winner Jameis Winston.

If Auburn wins, expect it to be because a pelican flew through the stadium, intercepted a pass, and regurgitated the ball whole into the arms of a defensive lineman who ran it back for a fat-guy touchdown. 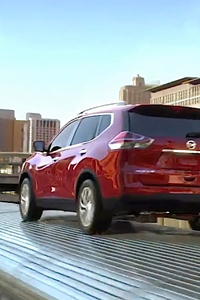 The Superbowl this is not. Those of you who have paid attention to bowl season have probably noticed that the theory behind bowl commercials is definitely quantity, not quality. Understand that there is no amount of mescaline that can be consumed where you will believe your Nissan Rogue can be driven on top of a train. Also understand that Nissan will not stop airing this commercial until all Americans either own a Rogue or have been neutralized.

Kevin Sumlin celebrated his successful season with a nice glass of bowl victory, a heaping helping of A&M contract extension money, and a side of all your recruits.

Vanderbilt’s IT department has noticed that James Franklin has spent an inordinate amount of time on LinkedIn.

Nick Saban took Friday afternoon off to have a sandwich before beginning an exhaustive study of the film of every game played this season by every team in the FBS.

Florida officials are spending the bowl weeks taking Will Muschamp on long walks in the hopes that he will tire himself out and quit chewing the corner of the couch.

Les Miles has finally found a replacement for his trademark hat that he lost in Tampa after the Outback Bowl.

Good and bad news for Ole Miss QB Bo Wallace, who redeemed his season with a solid performance in the Music City Bowl but is now being accused of bullying for flying all the way to Nashville just to beat up some nerds.

Tennessee has quietly put together the #4 ranked recruiting class, thanks largely to nepotism. Oh man, are they looking forward to that 2029 class...

Mississippi State vented some frustrations over their disappointing season by wailing on a bunch of scientists who had only donned uniforms in an effort to gather data on the forces exerted during an elastic collision.

Mark Richt got the letters W-E-L-P tattooed on his knuckles.

Arkansas was disappointed about its lack of a bowl appearance, but acknowledges that they can’t be held to the same standard as the football powerhouse of the state.

Mizzou spent the weekend Googling "Mizzou not ready for sec" while calling Mike Gundy and hanging up.

Kentucky is ready for sports season to finally start. 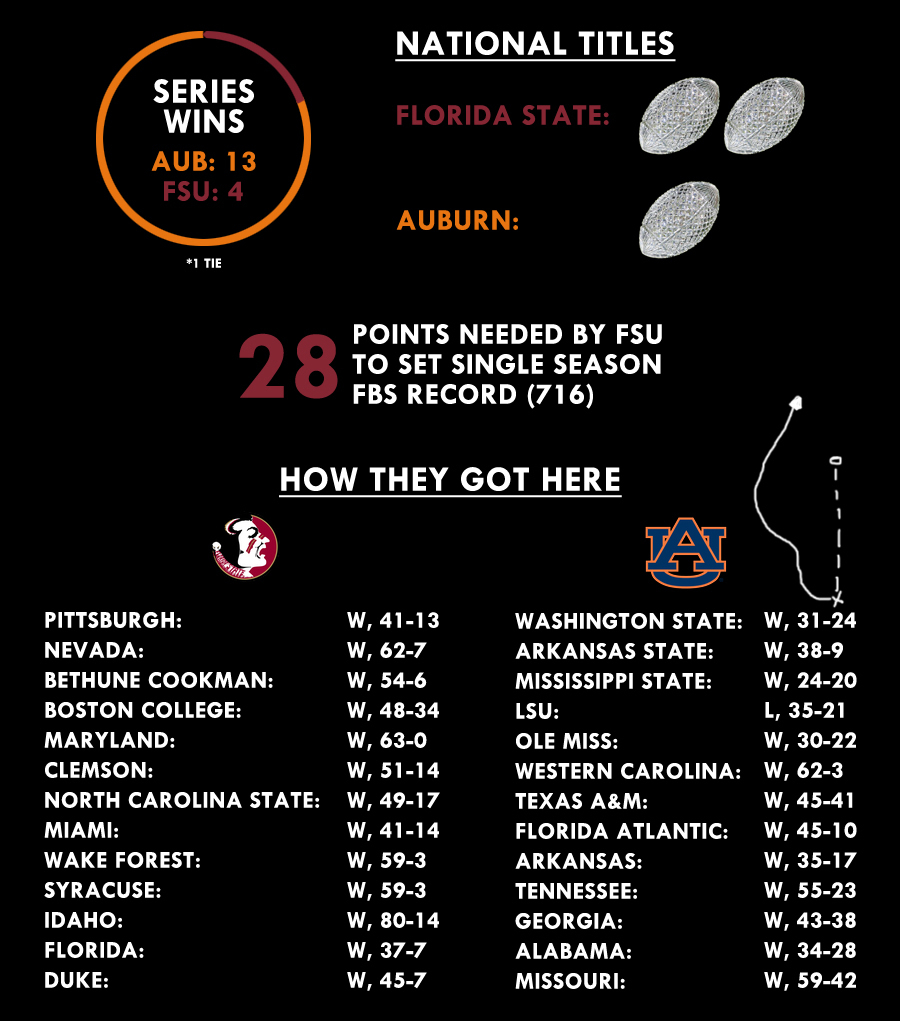 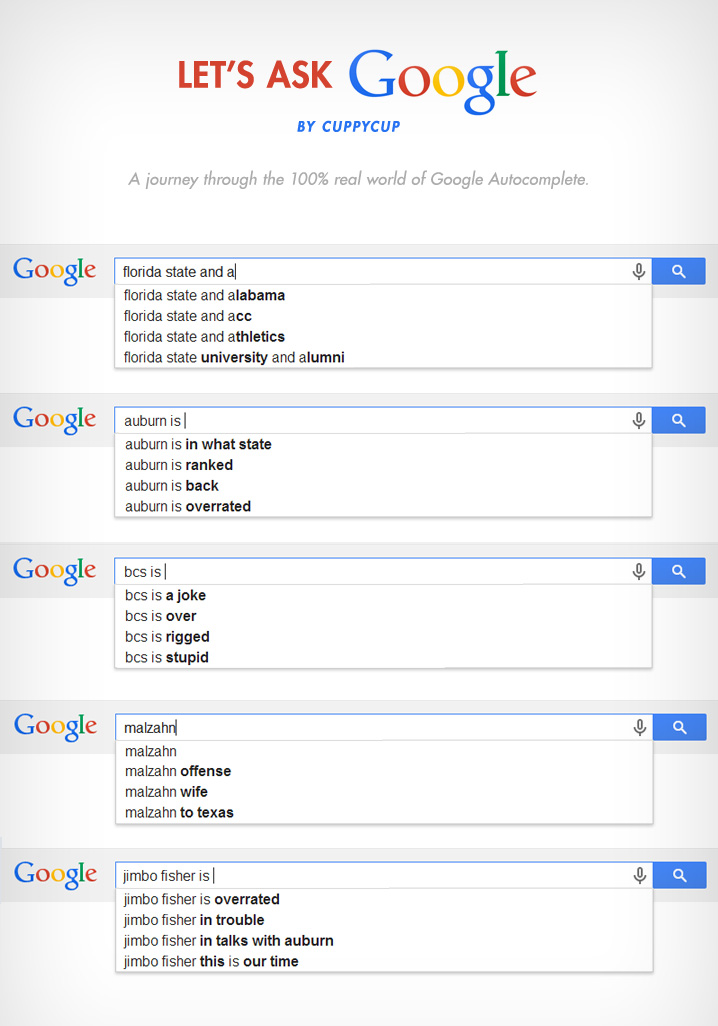 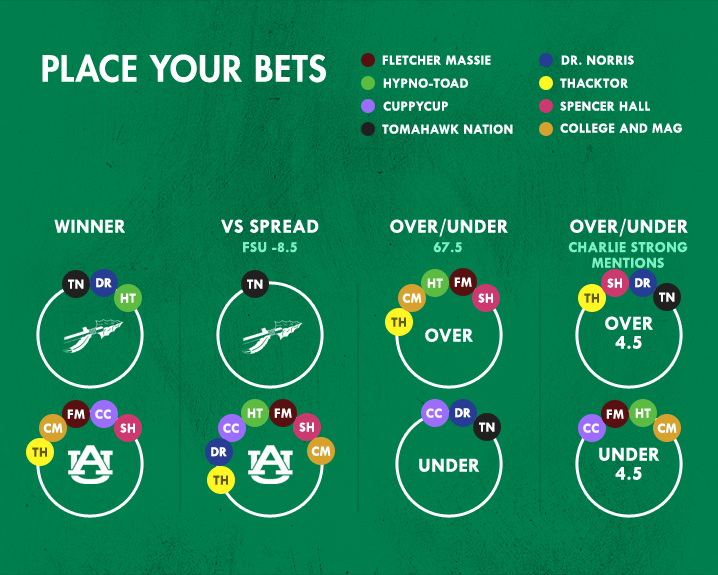 It's legit offseason now. Some of you may actually have to reconnect with your families again. Some of you need to do real work again instead of watching highlight videos. These are good things. It's not all bad. It's just... offseason. Sigh. This sucks. Can't they move D-II and D-III to the spring? WE NEED FOOTBALL DAMN YOU! 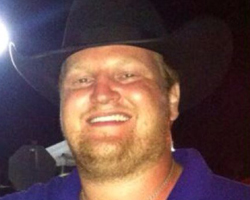 I hear fsu has the same feline allergies as the Aggies. #GBHChampionship 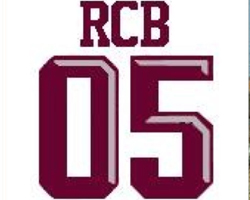 Heisman vs. Horsecollar. This BCS title game is a cruel reminder of what could've been for A&M in 2013. #GBHChampionship 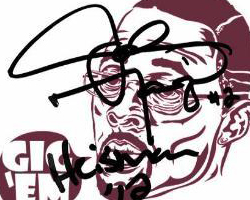 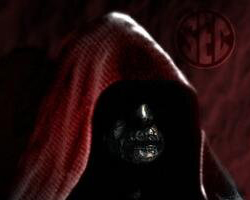 Johnny pilots Drake's jet over the Rose Bowl, skywriting "One More Year" before cropdusting the guy who horsecollared him. #GBHChampionship 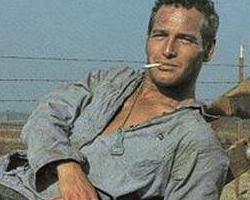 Hop on the bus, Gus. No need to discuss much. Just sack the QB, Dee. And listen to me. #GBHChampionship 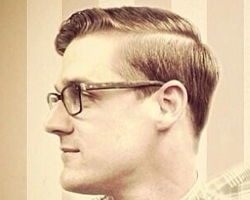 FSU loses to Auburn on an Acquit Six. #GBHChampionship

There is no truth to reports that Texas A&M will not be playing in the national championship game. None.