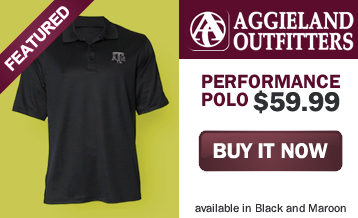 Lightweight and great for sporting events.

A history lesson. Our very own fletcher.massie took an in-depth look at the history of the 12th Man tradition, complete with documentation from Cushing Library. It's an excellent read, even if you're not a history buff. And if you want some real Wrecking Crew, check out that 1922 box score against Centre College.

About Seattle, though. While no one likes this whole 12th Man kerfuffle, there are still a trio of Ags on the Seahawks' roster, including Red Bryant and Michael Bennett, who have been key contributors on the defensive line lately.

Another National Football League thing. Last one, really. Former SWC legend and Houston Texans head coach Gary Kubiak '83 has accepted the offensive coordinator job with the Balitimore Ravens. While the HC gig didn't work out for him, it's good to see that he's still in demand, especially with a Harbaugh.

The Flip. ESPN actually takes a pretty good look at the last moments of the recruitment of 4* linebacker Otaro Alaka. This isn't actually brand-new or anything. There are even graphs to use as evidence.