We keep saying that our defense is young and will get better. Let's see if the roster supports that assertion.

The past few days have been filled with a significant amount of defensive recruiting news--whether it be Otaro Alaka's committment to Texas A&M or Nick Harvey deciding to take a jaunt to Austin. With that comes a lot of conversation about how our defense performed this year and how much we need these new guys to come in ready to perform.

The 2013 Aggie defense was terrible no matter how you slice it... which is hard to swallow considering that the 2012 iteration was very promising. I mean think about it, A&M held Eddie Lacy and TJ Yeldon to 122 total rushing yards. That just seems insane to me. But thinking back on it, that team had senior leaders like Spencer Nealy, Sean Porter, Jonathan Stewart, Dustin Harris, and Steven Terrell. That was also the last season in maroon and white for elite pass rusher Damontre Moore. The 2012 Aggies were also very lucky as far as injuries go.

This year was different in terms of leadership and productivity, so I decided to take a look at our recruiting classes from 2009-2013 to see how players progressed. 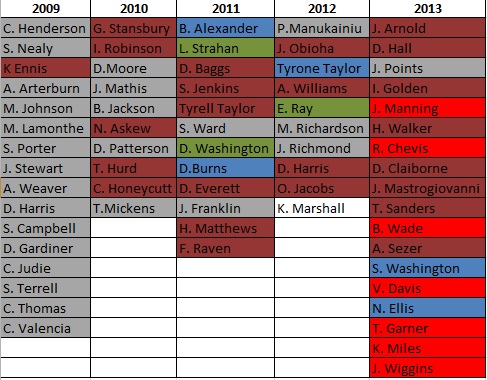 Study the table for a moment. I've provided my thoughts and observations below:

Based on the above chart, it seems that A&M could never manage to put together a complete class of contributors. 2010 was decent for DBs and DL, but there was a huge hole at LB. On the flipside, 2011 was decent at LB and DB, but nothing came through at DL. I've said this before, but for every accolade Mike Sherman receives for his offensive recruiting, he deserves the same amount of criticism for his defensive misses.
More than that though, 2013 seems like the only year that A&M put together a roster full of legitimate SEC prospects. Combine that with the incoming haul of 2014, and I think we'll see a significant defensive improvement simply because we are elevating our talent level. But note that our defense will continue to be young next year. 2015 might be the first year that we can shed the "young" label and field a talented AND deep defense.
Additionally, it is no wonder that defensive recruits are flocking to commit to the Aggies. Our coaches have proven that they aren't afraid to play young players. Given the current depth chart, there's no reason that a youngster like Myles Garrett or Nick Harvey can't come in and challenge for immediate playing time.
That's my quick breakdown of the defense. Comment below and let us know what you think.
Based on what you see above:
1) Can we expect improvement in 2014?
2) Does A&M's depth chart explain the defensive woes?