The History of the 12th Man

"The feeling of the 12th Man embraces more, however, than readiness to serve on an athletic field. It includes a desire to uphold the lofty ideals of the institution. It represents complete loyalty to honor, comradeship to one another and a deep feeling of personal pride in the program of the school" - The Eagle 1942

Share All sharing options for: The History of the 12th Man

It is an undisputed fact that The 12th Man belongs to Texas A&M University. Earlier this month, Good Bull Hunting acquired the trademark and licensing agreement from the University, outlining ownership. With the recent success of the Seattle Seahawks, the debate has been ignited as to the true function of the 12th Man. Our historical investigator, Terri Siqueiros, returned to the Cushing Memorial Library archives to shed some light on the history of E. King Gill and the rise of the 12th Man.

It all began during the 1921 football season. The Agricultural and Mechanical College of Texas played a tough schedule going 6-1-2 (3-0-2 SWC).

There are two results we can take away from the 1921 season. First, why do we keep playing teams with a Tiger mascot? It didn't even work for us back then. Second, according to the firsthand account of Yell Leader, Red Thompson '21, "we had won the conference championship, but it had taken an awesome toll on our players. They were completely exhausted, both physically and mentally." Old Army still had one game left; the Dixie Classic in Dallas, TX against Centre College.

I had my allowance on the game and if we had lost I would have to have a job waiting on tables in the mess hall.

The Agricultural and Mechanical College entered the January 2nd game injured and short-handed, facing a Centre College team with two All-Americans and plenty of reserve players.

The following is a letter written to Mr. Tiny Keen from Red Thompson recalling the events of that day: 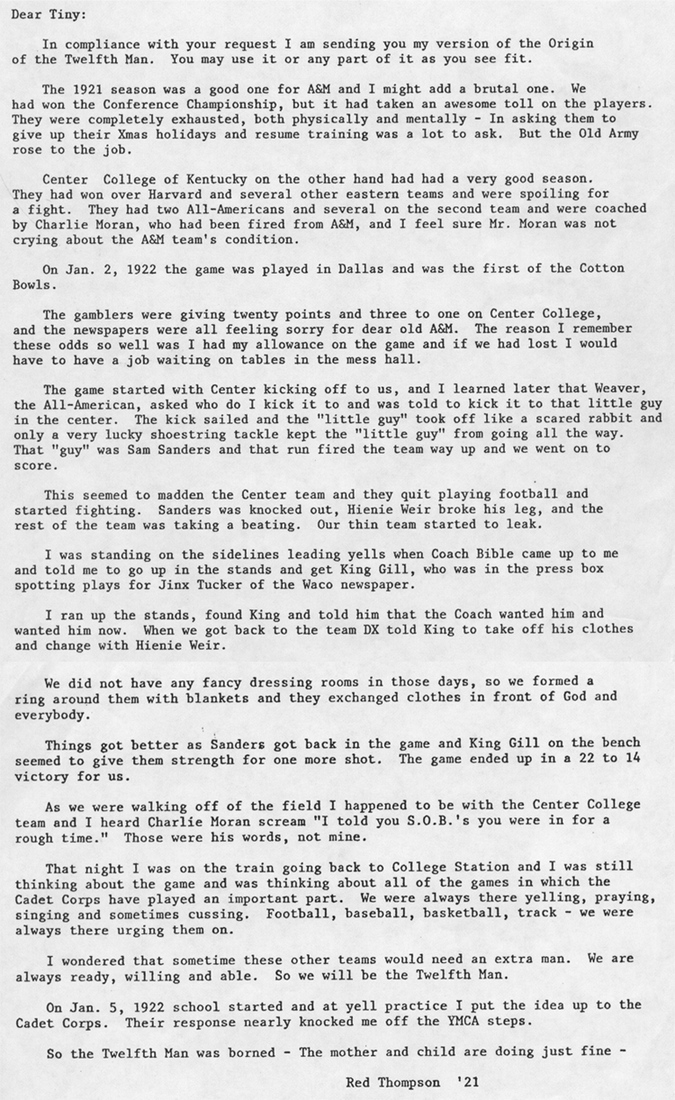 Thus, on the 2nd day of January, 1922 was born a tradition that would transcend sports and ingrain itself in the soul of every Aggie. E. King Gill was a hero, but he is not the only one to answer the call of the 12th Man and offer himself for his school.
1930: Coach Matty Bell called on the student body for a starting Center - Joe Love responded.
1941: Coach Homer Norton needed another starting center - 9 students responded and all found starting positions.
1943: Only four Aggie players reported in the fall as all the rest had left for World War 2 - 135 boys turned out for football to prevent cancelling the season.

The 12th Man tradition has grown and changed over the years. The player that wears #12 is now a non-scholarship/walk-on player representing the student body's support for their team. This is what the 12th Man tradition symbolizes. It is a bond of loyalty between Aggies.

The NFL franchise joined the league in 1976 (54 years after E. King Gill was called from the stands). The #12 jersey was retired in 1984 in honor of the fans and later in 2003 a flag pole was installed at CenturyLink Field to raise the 12th Man Flag before every home game. According to Seattle's 12th Man website their fans are the loudest in the NFL. I won't argue against that. They have truly created a hostile home field advantage. However, is the sole purpose of the 12th Man to be loud?

Seattle may have an unfair advantage in their stadium due to noise, but I believe the tradition has a much deeper meaning. The Eagle summed it up perfectly in an article written in 1942 stating, "[The] feeling of the 12th Man embraces more, however, than readiness to serve on an athletic field. It includes a desire to uphold the lofty ideals of the institution. It represents complete loyalty to honor, comradeship to one another and a deep feeling of personal pride in the program of the school."

It is about much more than noise.

P.S. By the way, Seattle, Aggies were standing in the rain at football games long before you made it cool. 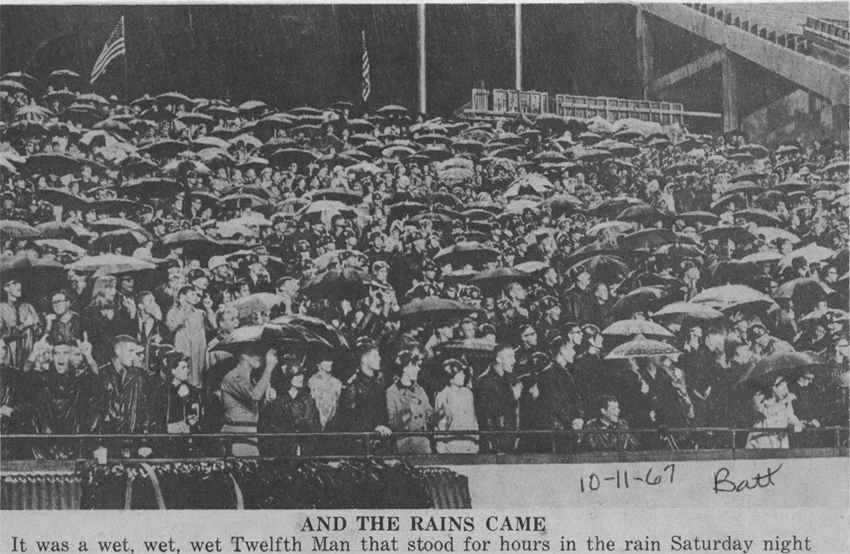