Photographer Dion C. McInnis, '03 shared these wonderful photos for Bonfire 2013 with us. Dion was Head Stack, '03-'04 (first such off-campus), and is a Bonfire and Aggie photographer and documentarian.

Every Bonfire season is unique and memorable for different reasons to different people. Using this opportunity to speak for myself, I'll remember seeing the family of Levi Garrett Windle again. Levi, a Grey Pot (the recursors of Red Pots), passed away at his home in 2003. 2013 marked ten years since we lost a son, brother, buddy, Good Ag, and outstanding person.

Today, the four poles tied into Centerpole that form the internal framework of the modern Stack are called Windle Sticks. Levi's family came to watch them be set; they came with fistfuls of stickers for "Windle Sticks Ranch," named for the heart of Stack named for their boy. They met Schuhmacher Hall, the year's Centerpole Crew. And Walton Hall's Crew Chiefs came out. There were hugs all around, but I'll remember most the embrace of the young Aggie that wore Levi's Chief Pot.

I'll remember the significance of each to the other, the new and the old. So important was one to the other that they became the same. That's Bonfire. And, organizationally, that's precisely the standout product of this season.

I'll remember the first Stack Shift. Always slow to start as the students transition from a Cut mentality to Stack, 2013 was shockingly different. From two minutes into Stack, the entire operation was functioning as if it were two weeks into the season. I realized then that Bonfire had once again become innate, the peculiar instinct of the motivated Fightin' Texas Aggie.

Clearly I am not alone in my appreciation of these proud students and their work. Still recovering from delayed Burns due to burn bans in 2010 and 2011, the students were dealt a formidable blow with slow, steady, soaking rains that turned Stack into a dangerous quagmire just days before Burn.

Faced with another postponement, and the financial implications of a public Burn event in the spring semester, the students were seemingly out of options. It was feared that a private Burn would once again be the only option that would preserve the students' ability to Build the Hell Outta Bonfire 2014. Until...

Friends of the Fire

Recognizing the situation, and the students' earnest desire to share Bonfire with Aggieland WHILE not putting the next year at risk, Former Students and other supporters stepped up in an extraordinary way. Through their stewardship, they presented one of the most outstanding fires ever off campus. In the middle of January. No game. No rivalry. Just Bonfire: the undying flame of love that every loyal Aggie carries in their heart for the school.

The collective efforts of the students and Friends of the Fire in 2013 clearly showed that any objective of Bonfire moving forward is attainable. Concerns of parking, transportation, capacity, attendance, even (dare I say) proximity to campus... all of these can and will be met.

I thank all of you. The students that build Bonfire and the Friends of the Fire that advance that work. You made Bonfire 2013 memorable.

Special thanks to @GBHunting and TexAgs (@TexAgsRadio) for helping put forward the challenges, victories, and product of these motivated Ags.

Bonfire 2014 is already in progress.

Read more about Student Bonfire at studentbonfire.com and see it on flickr. 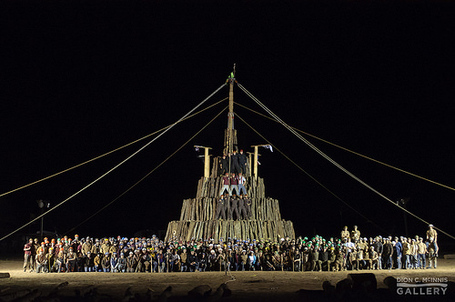