Kevin Sumlin and his staff had the benefit of getting seven guys on campus early. Fortunately, most of them will be expected to fight for significant playing time early on.

With spring semester classes starting today, Texas A&M officially added seven new members to their football family. Highlighted by two consensus five-stars, this group of early enrollees will get the benefit of getting on a college strength and conditioning program five months earlier than their classmates, as well as go through spring ball with the team. It will be needed, as this group will add much needed depth to the current roster, with the majority fighting for starting positions.

The 6'3" 200 pound gunslinger from Arizona will immediately step in and battle Sophomore Kenny Hill as Johnny Football's successor. Kyle is rated by 247Sports.com Composite Ranking as the #1 Pro-Style quarterback in the country and #15 player overall.

In a class as talented as this one for the Aggies, it's hard to identify one "headliner." However, due to the ramifications his commitment to Texas A&M, Speedy Noil would be the one. Kevin Sumlin and his staff went into South Louisiana and took a kid LSU wanted desperately. That just doesn't happen and adding Speedy signals that the Ags are a legit national recruiting power. Noil lacks height at 5'10" but has the skill set to overcome that and play any of the four receiver spots for Texas A&M. 247Sports.com Composite Ranking has him as the #1 receiver in the country and #11 player overall.

The Aggies weren't done at receiver, bringing in Reynolds from Tyler Junior College. Due to focusing on sports other than football, Reynolds received one offer as a high school senior from Oregon State. Despite being a full-qualifier, he headed the JUCO route to increase his visibility to college programs. Obviously, that decision paid off. At 6'2" Reynolds will look to replace the production of departing Seniors Travis Labhart and Derel Walker.

With Jake Matthews headed to the NFL, coach BJ Anderson needed some immediate help up front. At 6'5" 300 pounds, Jermaine is an England native would played his college ball Lackawanna Community College in Pennsylvania. The consensus four-star is versatile enough to play guard or tackle at the next level and will definitely be in the rotation for the 2014 season. 247Sports.com Composite Ranking has Eluemunor 3rd best JUCO tackle and 7th best JUCO player overall.

In somewhat of a shocker, the Aggies were able to add more beef up front and snatch up Gennesy, who was thought to be a hard Ole Miss lean. Avery is another 6'5" 300-pounder  who is versatile enough to play inside or outside in college. Like Eluemunor, he will push for the starting RT job with Cedric Ogbuehi moving to LT. Avery is ranked as the #5 JUCO tackle and 9th overall best JUCO player by 247Sports.com Composite Ranking.

Although the Aggie legacy was originally part of the 2013 class and actually graduated high school last year, he suffered a severe knee injury that kept him rehabbing all summer and fall. To help with numbers in the 2013 class, Coach Sumlin asked JJ to wait to enroll now. The 6'5" Gustafson will almost certainly need a redshirt year after this spring as he continues to get his body ready for the college game.

Late last week, Kevin Sumlin showed new Texas Head Coach Charlie Strong who's on top in this state right now; stealing one of the Longhorns' top recruits only a few hours after he had reaffirmed his pledge to the new Texas head man. The 6'1" 280 pound Longview defensive tackle is a prototypical noseguard and a perfect compliment on the defensive line to current Aggie commit DeShawn Washington. Henderson is a four-star prospect according to the 247Sports Composite and ranked as the #23 defensive tackle in the nation. 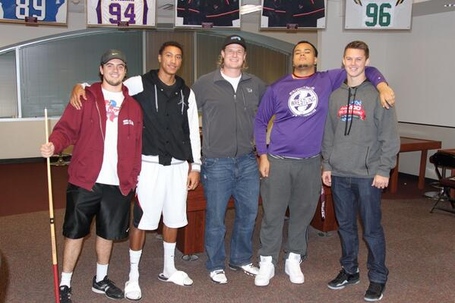