A culmination of journeys in Atlanta

Share All sharing options for: Happy 2014: Here is Your Team

It's a few minutes before midnight in Atlanta. Glitter rains down in the Georgia Dome as the last wisps of acrid gunpowder from the ending fireworks hang in the air. The die-hard fans who stayed are sawing Varsity's horns off. It all seemed improbable at best just a couple of hours ago, as the Duke fans who still stand gaping incredulously directly in front of us can attest. There is the way football should be played, where hours and years of practice and proficiency and repetition make you nearly infallible. And then there is that one slip of the mind that alters a pass by a few inches and the once-in-a-lifetime, blunder-erasing talent on the other side of the field that negates all that. Emotion trumped discipline tonight, and playing the heartbreaker for once feels sort of good and dirty, like a teenager breaking curfew. After what we've seen the past two years, emotion is our drug. And our supplier is probably leaving us.

The story of Johnny Manziel's meteoric career mirrors the story of this blog in many ways. In the summer of 2012 we both rose out of obscurity to find our own special niche in the college football strata. The story of this blog is also in small part the story of myself and my friend Lucas Jackson. We were roommates at Texas A&M: we witnessed as students the slow, sweet decay of the RC Slocum Machine. As newly-minted alumni we endured the false hopes and eccentricity of the Fran years and grew into the cyclical disappointments of the Sherman Era. We spent countless hours watching and talking about Aggie Football and the world of the college game: in person, on the phone, on the wonderful community at EDSBS, and then one day we were up on campus before dawn with cuppycup, holding our brand new SB Nation signs as GameDay was being filmed before our first SEC matchup against Florida in 2012.

That chronicle is here, and it was a beginning for us, and for Johnny.

Now, sixteen months later, we've probably witnessed his last college game. We saw it in person, for better or worse, in the press box of the Georgia Dome as credentialed members of the media. But this is not an ending.

The Georgia Dome is impressive. Like rubes, we wandered around in uncomfortably neutral clothes, snapping pictures and videos and wondering at our ability to freely roam the rambling back tunnels on the field level; flashing large placards around our necks to be whisked up to the press area via a guarded elevator. It's a far different experience, and an incredibly long journey from an early September Saturday in College Station just over a year ago. The air is chilled and sterile, there is a hum of machinery hanging in the air, there is the smell of funnel cakes being prepared and a noticeable absence of humanity in such a vast space four hours before kickoff. Student managers are playing catch and touch football on the turf. It's not where we thought we would be, but it's where we are. 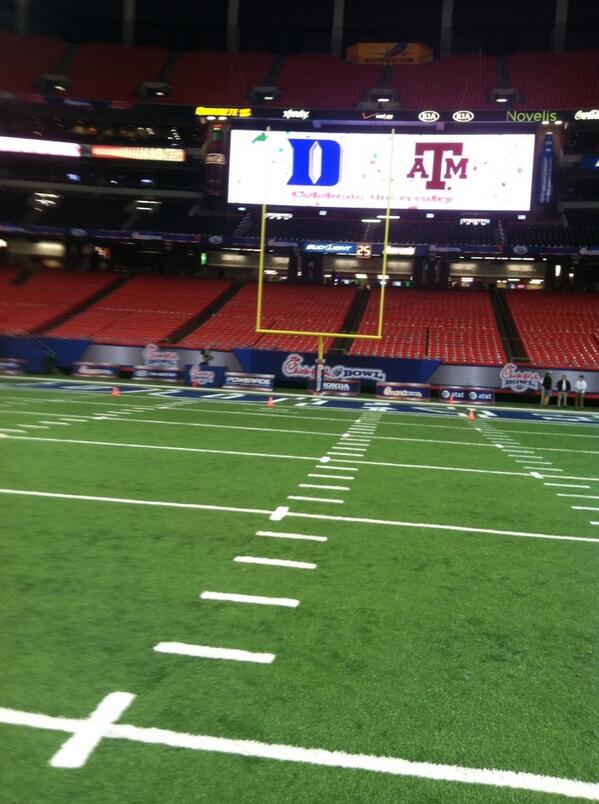 This is my first visit. I am not as well-versed in SEC lore as Lucas: he grew up with the SEC, whereas I was a child of the SWC. Listening to crackly AM broadcasts of Rice-Texas games on my dad's truck radio during lazy Saturday afternoons at the hunting camp, the red-sand brushland of South Texas a million miles away from this place in the heart of Dixie. I was in high school when the Big 12 was cobbled together by petty legislators out of two once-proud but dying conferences. This building represents a release from this convoluted past, even though our appearance here comes a few weeks later than we'd hoped. Atlanta is the standard, and this appearance is nothing to be ashamed of: it was earned by the incredible body of work built by a very special player. There will be playoff games here, and the game will sell out as it has for so many years in a row. It will remain a vital part of the college football post-season landscape.

We went down to ground level again just before the game amid a throng of security ringing the field. There were hundreds of people with placards milling around by then, photographers, videographers, wealthy alums, bowl dignitaries, city dignitaries, former players, and presumably some other accidental people like us. Christian Ponder sat right up next to the wall out of sight of the stands speaking quietly with his wife as she peeled a banana, a tiny pocket of domesticity that seemed both incongruous and perfect in the surrounding madness. We had been in touch with Stewade and tried to find him, but couldn't. We talked to Jason Kirk for a while about Shutdown Fullback (his tribute to the game is here, and the fact that he pounded it out so quickly, sitting a few seats down the press table amazes me). The stands were steadily filling up and the hum of machinery had gradually transformed into one of humanity: laughing, chatter, the occasional hoot or holler and the canned music reverberating from the arching roof several stories up. Tiny, toylike figures tentatively moved about the catwalks, preparing to do pregame things for our benefit.

What happened in the first half was documented in the gamethread and on social media sufficiently for me, albeit with a bit of overreaching. To revisit it deeper right now is unnecessary: we know those wounds and will not dwell on them. Not on New Year's Day. It seemed like the worst of our fears: a continuation of the LSU malaise combined with unfulfilled hopes after a coaching change. It was excruciating to watch the combination of our ineptitude and their flawlessness. Duke is an excellent football team and as technically sound as any I can remember watching. Their coaching is tremendous and they should keep Coach Cutcliffe forever.

Whatever was said at halftime was said in earnest and with great conviction. There's no way to tell what was said, or who said it: that is for the coaches and players to know. I can tell you that Kevin Sumlin was hoarse during the trophy presentation. And that he had a swollen knuckle. And he was intense and he was happy. He's just won 20 games in his first two years in the SEC (the first time an Aggie coach has done that in any conference in their first two seasons). But it might come out at a booster luncheon or speaking engagement or on social media or who knows. The important thing is that this game should permanently and completely erase an uncomfortable mantle that was pressed upon us years ago: starting fast and choking. Blowing it in the second half. Rolling over. No toughness. Giving up.

Whatever was said lit a fire. There was a score, then a missed field goal, and the sideline erupted as if the game had been won. We were down by three scores still but there was an awakening. What happened next was one of those brutal slugfests that we've endured so many times with this team: the back-and-forth, the excruciating allowances on third downs, but slowly and steadily the team began to gel. The mental errors from the first half: the foolish fouls and false starts, the confusion and bewildered body language, began to evaporate and the team went to work.

The restraint was the most difficult part. Three offensive plays into the game for us, Lucas Jackson erupted in a storm of emotion. Even I caught myself before I could get out more than a "THERE YOU GO" or something like that. I pulled him aside and said "I don't think we should be doing that here." From there on out it was a flurry of fluttering limbs and gripping chairs every time something great or horrible happened, and there were so many great and horrible things that happened in this game. 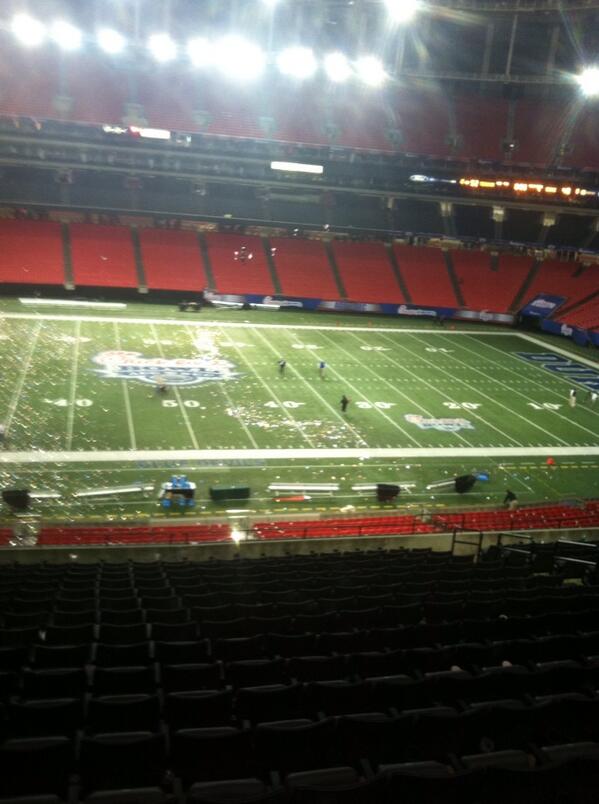 Cleaning the Dome. I didn't want to leave.

If one would have asked me to script a perfect end to this madness as the clock ticked down past five minutes remaining, it would be this: a senior captain and fan favorite would make the play of his career to bail out a mauled and maligned defense and seal the victory. So when Toney Hurd, Jr. intercepted Boone with just a few minutes remaining and housed it, streaking down the sideline in front of us into the end zone, leaping into the arms of a Yell Leader, I don't even remember what I did with my arms or feet or voice, but I think all of us just looked at each other and shook our heads. No words were needed at that point because none could be said.

It's now closer to 1 AM. The lights in the upper cavernous reaches of the Georgia Dome have been shut off. The jumbotrons are black. I'm still here with a few other people hammering on my keyboard as Lucas Jackson is killing it with questions in the presser downstairs. The portable stages from the trophy presentation have been removed, and glitter litters half of the field, leaving hollow rectangles where they had stood as workers work the other end of the debris with leafblowers. Utility carts are trucking away the signage as a few kids run around in the Duke end zone. There are limp novelty mini-parachutes from the postgame celebration draped on the camera zipline like drying laundry in this tired witness of a building; an afterthought for the next day, or the next year.

Which, I guess is here. This is your 2014 team, folks: malleable enough to need a leader should that void become real, but hardened enough by fire to be proud of and have faith in. And GBH will be with you every step of the way.

The smoke is still hazy and acrid in the air of the Georgia Dome. But the doubt, the despair, the Battered Aggie Syndrome, for the moment, is not.