Streakers are the most equally beloved and hated breed of fans in any sport. Looks like we have our first idiot for the Alabama game (if he gets 10,000 retweets that is).

UPDATE: As you can probably see below, he hit the 10,000 mark easily after the help of a few NFL players, GBHunting, SEC_Logo, etc.

If this gets 10,000 retweets I'll go streaking on the field during the Alabama game

Aggie Honor Code. Nobody likes people who don't stick to their bet. So I'll just keep this right here to remember.

Update: I'm going to guess no one has contacted him yet. He obviously thinks it's still on after hitting his goal. May I suggest you wear only overalls to the game? Easy on, easy off. 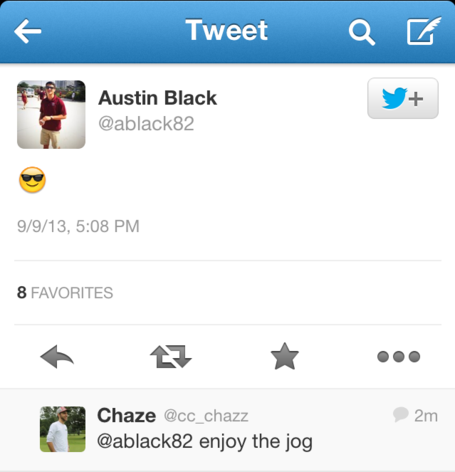 Update: It's obvious now that someone has contacted him, as our fantastic social media aware president, R. Bowen Loftin, has a small back and forth with Austin.

@aggieprez thank you for understanding, I will not disappoint you or the university.

In addition to free sunglasses and a talk with President Loftin, Austin was also offered a mate:

@ablack82 if you get 10,000 retweets and actually streak on #kylefield during the #BAMAvsTAMU game, I'll marry you under the century tree.

I know some parents are all for eloping, but this is a bit much:

Clearly Austin isn't the kind of guy to think before he acts on some occasions, but he may want to rethink any proposal. Based on this Vine post from June, Tayler showed that she may not be ready to handle all of the fame and responsibility that will come along with this marriage.

In response to our post, Tayler has made a video to show that she is cleaning up her act. In true New Army style, she also points out that she is a Hashtag Red Ass, and I love it.