When looking over the film from last week's 65-28 victory over Sam Houston State, we will find some things the defense has to improve upon before Alabama comes to town, as well as interesting new offensive formations used by the Aggies.

Today, we are going to look at a couple of different things from both the offense and the defense from this past weekend's victory over Sam Houston State.

Last week, we talked about how Sam Houston State likes to run the option. We specially talked about the arc block, and how a defense can't entirely use it to read the direction of a play, or else the running back dive cutback will be wide open if the defense loses backside containment. On Sam Houston's first drive of the game against Texas A&M, that is exactly what happened.

Sam Houston will align in the diamond or full house formation. The two H-backs on this play will block to the right as the quarterback makes a read in the backfield with the running back who is aligned behind the quarterback. 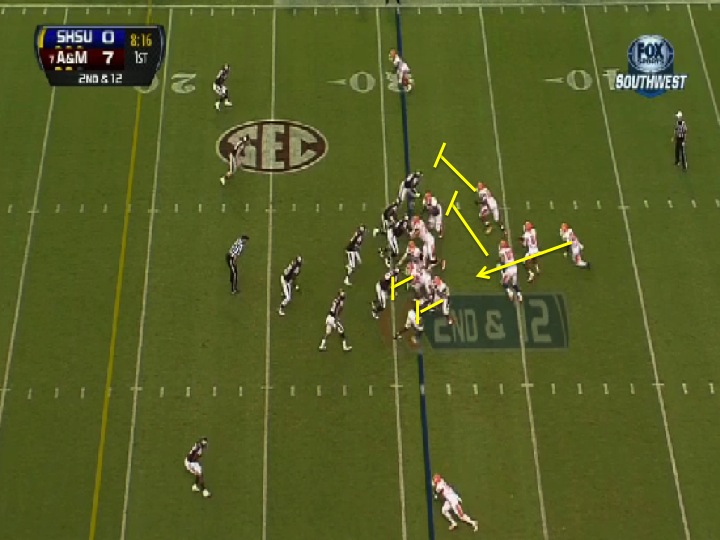 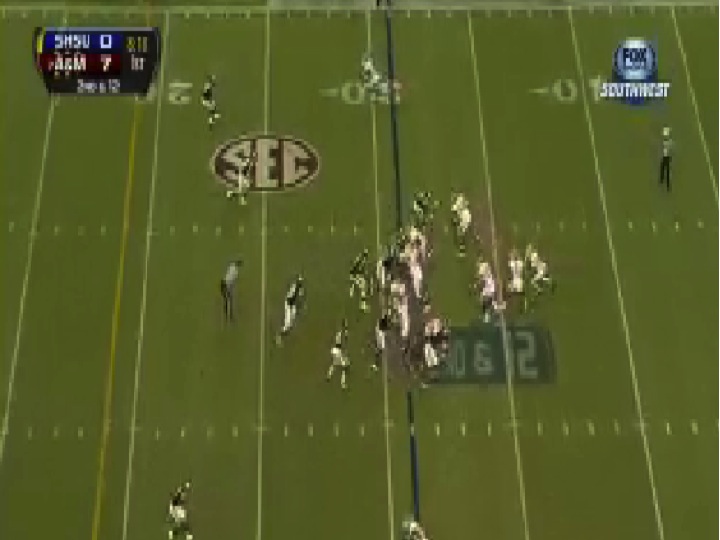 With two of the backfield's blockers going to the right of the formation, the defense will flow with them to that side of the field. This is a big mistake, as the quarterback hands off the ball to the running back on the dive. On the backside, Tyrone Taylor has rushed a good six or seven yards upfield taking himself out of the play, and Alonzo Williams was dominated one on one and pushed down the line of scrimmage. Both linebackers and safeties have moved to the right, and the only defender left on the backside is Howard Mathews who is occupied by a blocker. 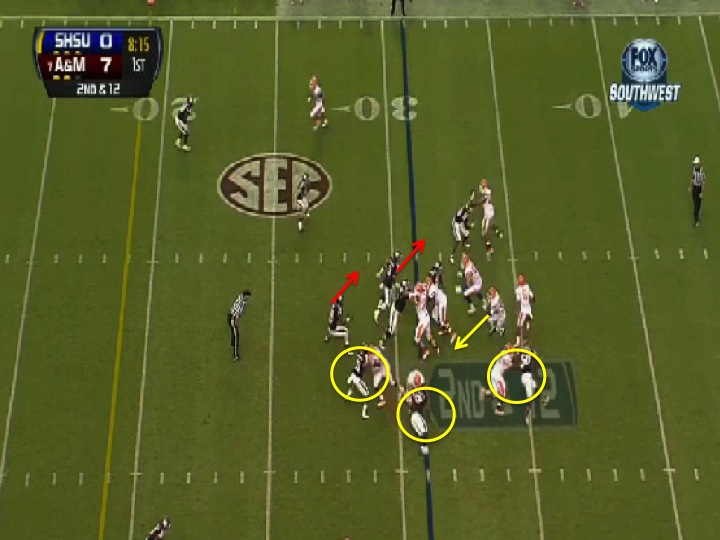 This creates a huge lane for running back Tim Flanders, who runs down the field to our five yard line. Sam Houston State will score on the exact same play on the next snap for their first touchdown of the game. 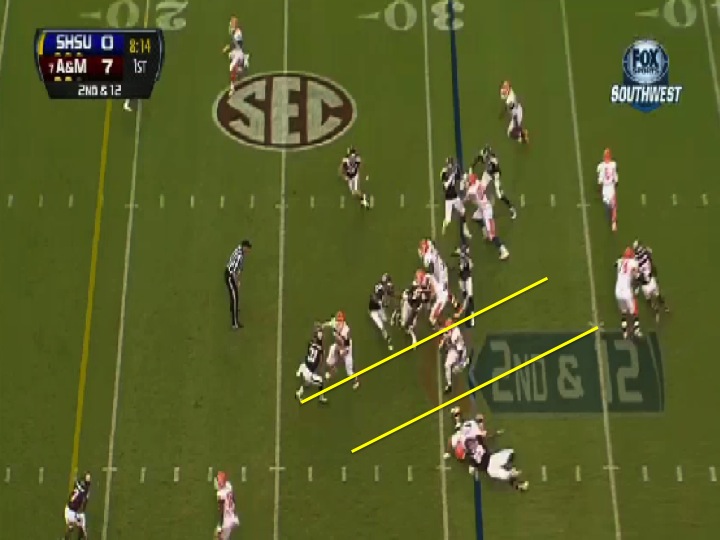 This is an example of our defense not playing with fundamentals. Our linebackers have over-pursued and our defensive line isn't good enough to win one-on-one blocks, even against Sam Houston State. Mix that with poor safety play, and we had problems keeping containment on the first drive against Sam Houston. Expect Alabama to see this and call their own running plays such as counter plays to TJ Yeldon to take advantage of our poor defensive fundamentals. They can also throw off of those plays running some waggles with A.J. McCarron.

Enough with the defense. They just aren't that fun to talk about. Let's talk about our offense and some new formations we displayed on Saturday night.

The first formation we are going to talk about is a pure power formation we ran on third and short, followed up again at the goalline. In this formation, both Cameron Clear and Nehemiah Hicks are on the field. Cam Clear is an end-of-the-line tight end aligned next to Jake Matthews. Hicks starts off on that side of the field, will go in motion, and then return to that same position. In the backfield, Tra Carson is next to Johnny and Ben Malena is lined up deep and will receive the ball on a handoff. This is a simple down-down-quick out play where both Jake Matthews and Cam Clear will block down against defensive linemen. Hicks and a pulling Germain Ifedi will then fill their positions trying to clear out anyone who is left. Carson is going to block away from the play, trying to draw a linebacker or safety with him and Malena will run right behind the pulling Ifedi and Hicks. 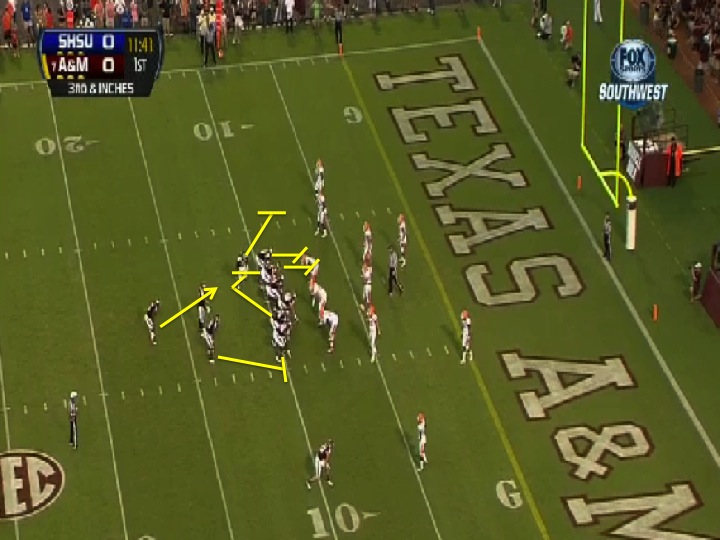 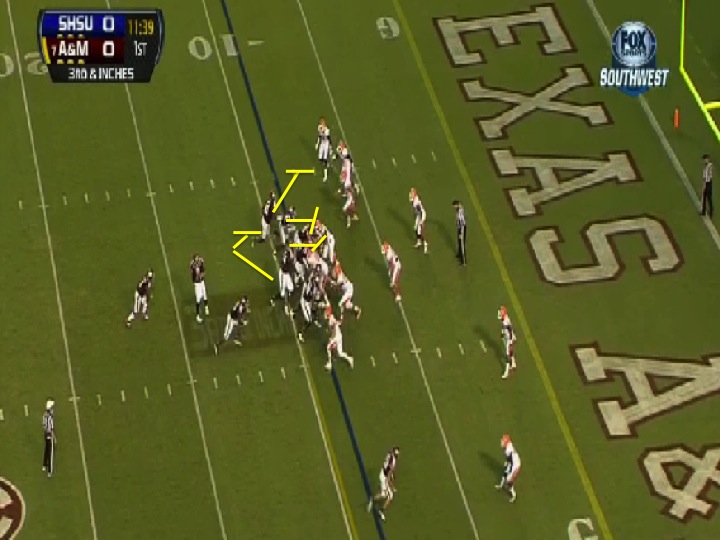 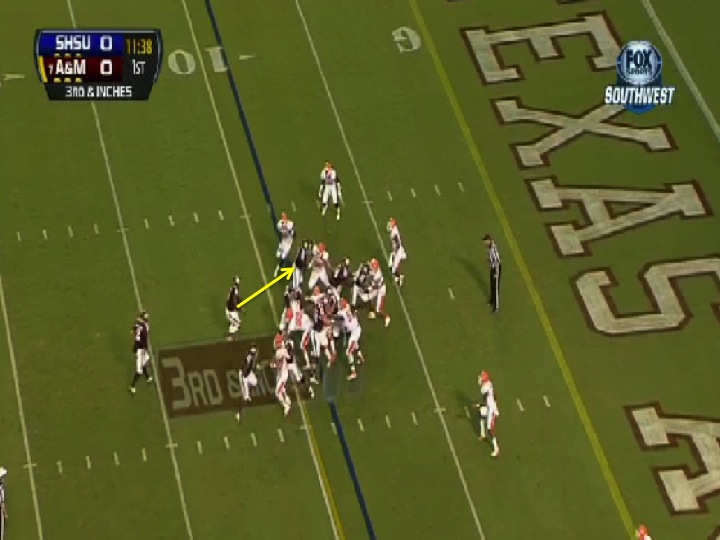 While this play will convert a 3rd and inches, the true highlight is Cam Clear. He was the down block at end of the line, trying to clear out room for the pulling Ifedi and Malena. Just look at where he drives his guy to (highlighted). Almost clear across the formation. He did the same against Rice, as seen in this Vine I made. 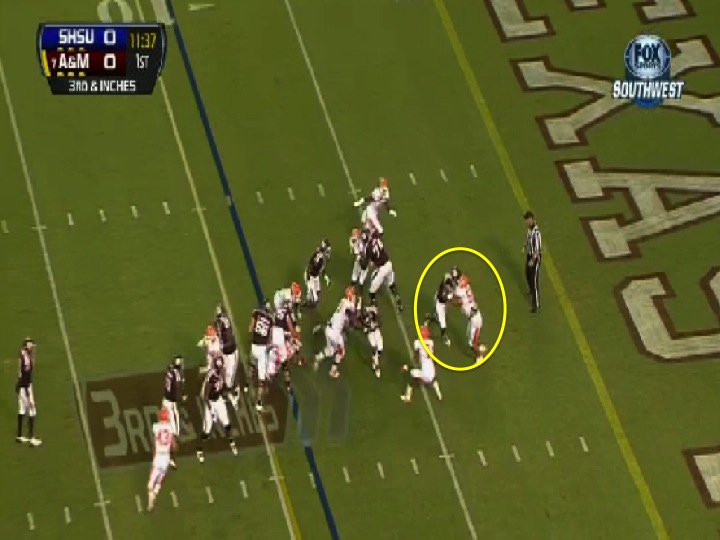 After we convert on 3rd and short, we will run the exact same play on 1st and goal. See if you can follow the blocks. Ifedi does a much better job on this play of pulling around the end and you can see the play develop better. 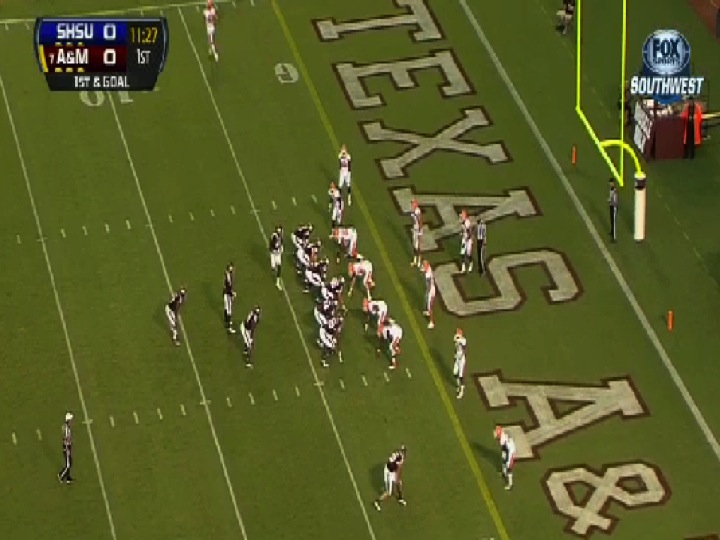 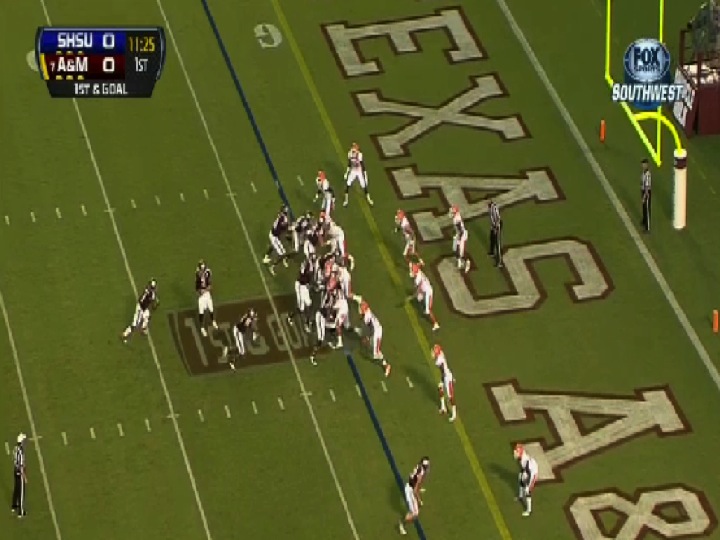 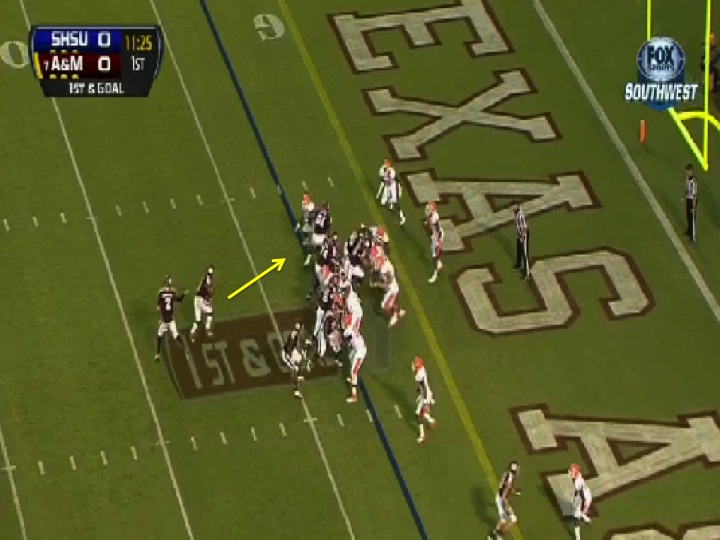 Again, look at Cam Clear who is highlighted driving his man off the ball. Don't tell me he isn't a beast. His blocking at the end-of-the-line is something you are going to see a lot more of next weekend against Alabama. He gives our running game a huge advantage. 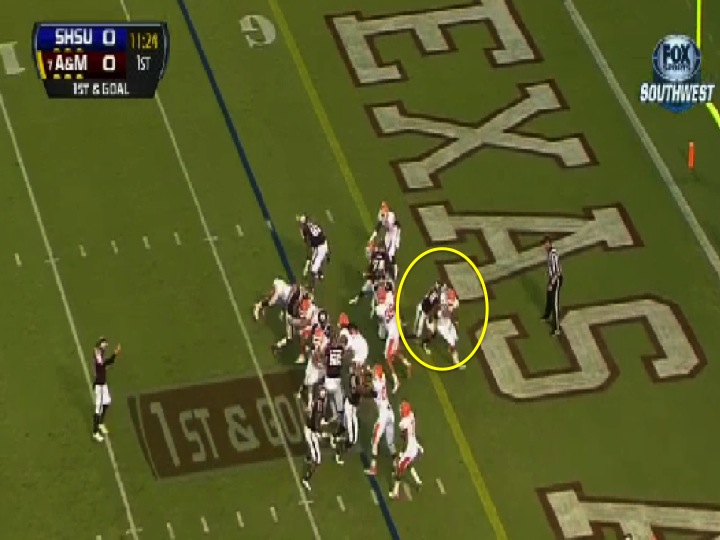 Finally, here is my favorite play from the weekend. We finally line up in a diamond formation, something that has been speculated about all offseason. In the backfield is both Cam Clear and Nehemiah Hicks again with Malena behind Johnny. This is going to be a screen play where Clear goes in motion to the right and Johnny will simply throw it to Malena with both Clear and Hicks out in front of him. 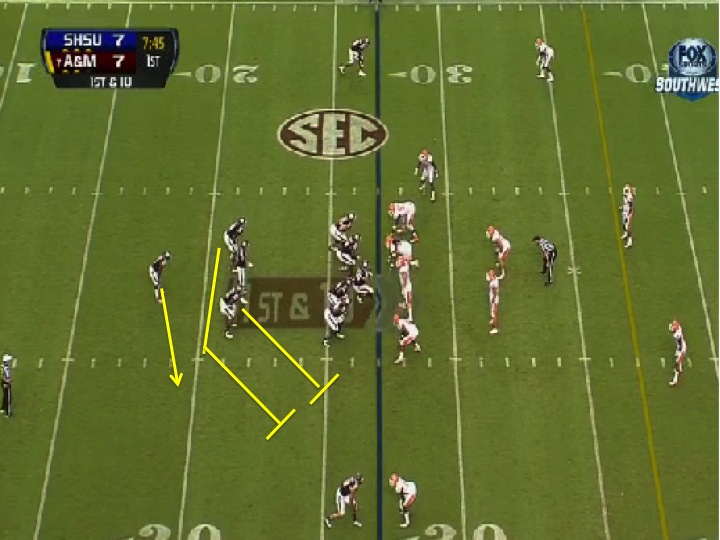 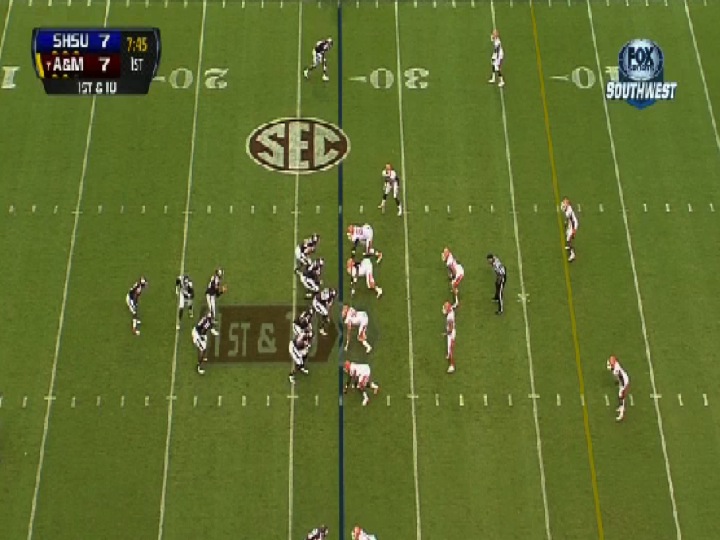 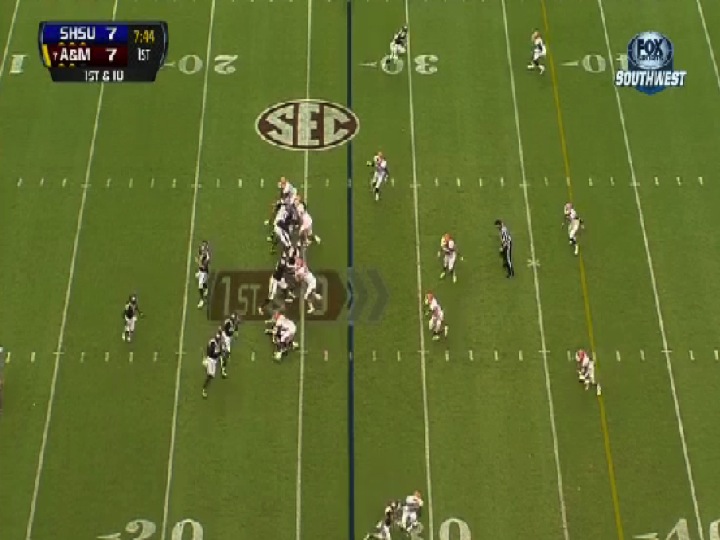 Malena will take this swing pass to out past the 50 yard line. I LOVE IT. This is the kind of versatility we expected out of our tight ends this year, giving us more formations and more play calls to take advantage of different personnel groupings. Alabama has no doubt seen these tight ends on film and will be trying to gameplan for them all week long. Alabama has a great defense, but I'm going to take our offense with both Clear and Hicks in the game. That, along with our offensive line, is not a battle many can win against.

Why show some of these power formations? First, the offense has to get comfortable being on the field together. And who knows what we could run out of the same formations and plays we showed. For instance, in the above screen? Next week we could send Clear in motion again and fake the screen to Malena, getting the Alabama defense to over-pursue, and then throw to the receiver to the left on the opposite side of this field for his own screen. There is a reason why we showed these formations and plays on film, and I can't wait to find out why we did next weekend.