The Rice Owls found success against Texas A&M with their option attack. This week, Sam Houston State comes to Kyle with their own, unique spin on the option that is similar to what both the Washington Redskins and San Francisco 49ers run in the NFL.

Last weekend, a young Aggie defense was asked to defend an offense by the Rice Owls that was built around the option.  This week, the challenge will be the same -- know your assignments, fill your gaps, and stop the option at all costs.  However, Sam Houston won't be bringing in the exact same looks that Rice gave us last week.  Sam Houston's option attack is far more complex than anything Rice ran last Saturday, and features some unique elements that have made their way into the NFL.  These elements helped the Bearkats to be one of the most prolific scoring offenses in the FCS last season -- they were only the third FCS program to score more than 600 points in one season.  While Rice had the experience along the offensive line returning all 5 starters (only one starter returns for SHSU), Sam Houston is much more dynamic at the skill positions.  A name to remember is Tim Flanders, an FCS All-American for two straight years and Sam Houston's all-time leading rusher.  He is on pace to shatter the Southland Conference's career rushing record (over 4700 yards).  The offense is run by Brian Bell, the most decorated signal-caller in SHSU history with more wins, touchdown passes, passing yards, and total offensive yards than any other quarterback.

If you watch the San Francisco 49ers on Sunday or the Washington Redskins on Monday Night Football, you will see an element in their option attack that was originally created by Chris Ault at Nevada.  It is termed the "arc" block, where usually a type of H-back will loop around the unblocked defender a quarterback is reading. This blocker takes the first defender who is a threat to either a scrambling quarterback or his pitchman on the option (usually an outside linebacker or safety).  Not only is this H-back used as an extra blocker out in front of the quarterback, but he can also cause a defense to over-pursue the threat of a scrambling quarterback, leaving the initial running back dive plenty of room to run on the backside.  Let's look at an example.

The plays shown here are all taken from Sam Houston State's victory over Cal Poly in the 2012 FCS Playoffs -- a game Sam Houston would win (you can watch all their offensive snaps from that game in this Youtube video).  Cal Poly is aligned in a traditional 4-3 defense, while Sam Houston shows one of their many pistol formations.  This triple option play will be run away from the formation's strength.  The quarterback will have three options on the play: 1) a running back dive 2) a quarterback keep and 3) a pitch to the running back.  Like all other option plays, the quarterback will determine his read from the unblocked defender, in this case the defensive end that is highlighted.  What makes this play interesting is the tight end or H-back.  He will be moving across the formation to perform the "arc" block after the snap. 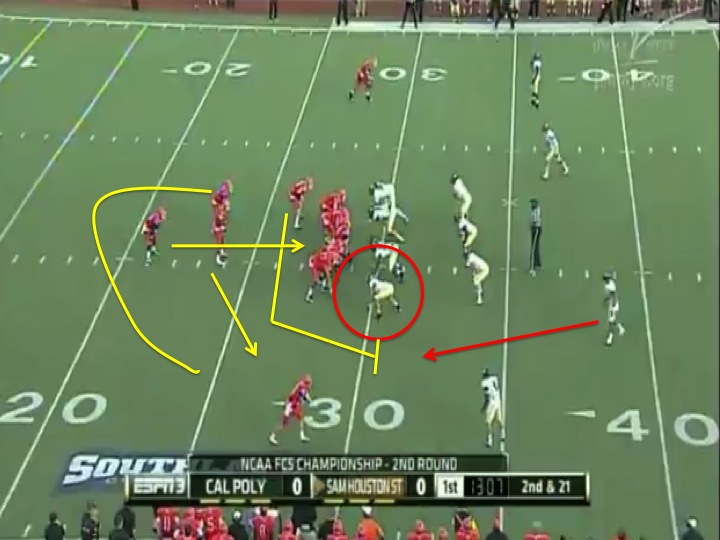 You can see his movement after the snap.  He will disregard the unblocked defensive end who is being read by the quarterback and try to get up-field and block the most dangerous threat who might appear against the pitch.  On this play, it will be the safety who crashes down toward the line of scrimmage after diagnosing the play. 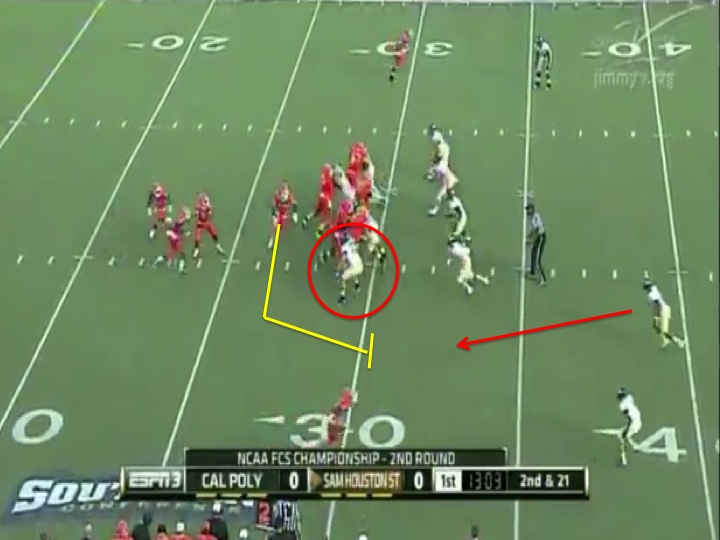 Here is the block on the safety from two different angles. 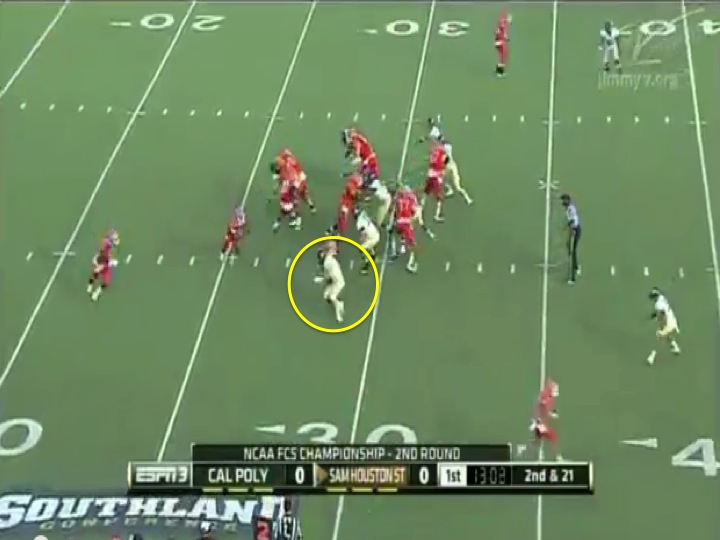 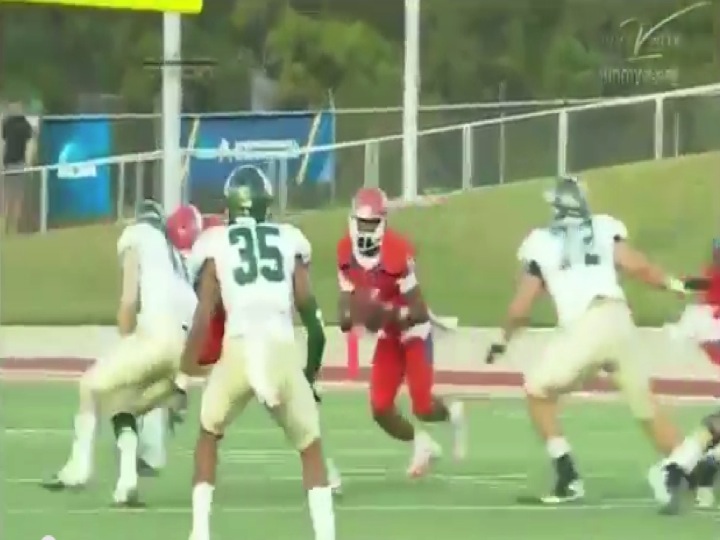 What is interesting about this play is that the safety closed a little outside of the initial formation as shown.  This caused the tight end to block him away from the alley, and on the safety's outside shoulder.  This forces the quarterback back into the middle of the field, and takes his pitchman out of the play.  The quarterback is then tackled by the original unblocked defensive end.  Cal Poly came into this game well aware of the "arc" block and tried to use it to their advantage. 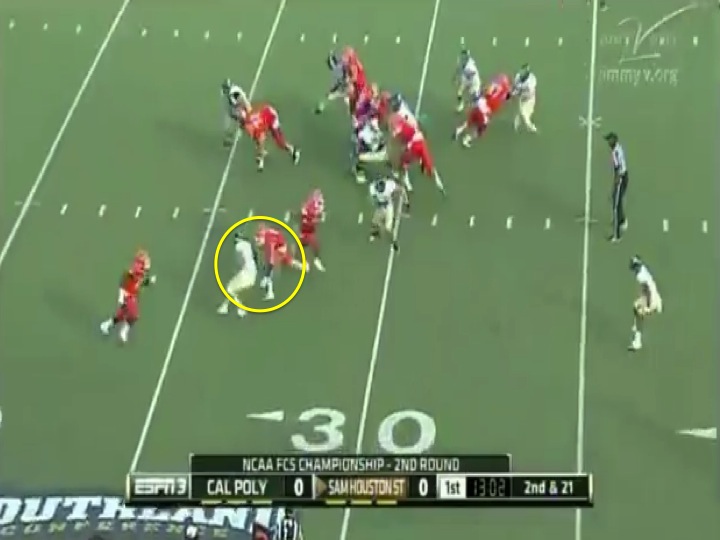 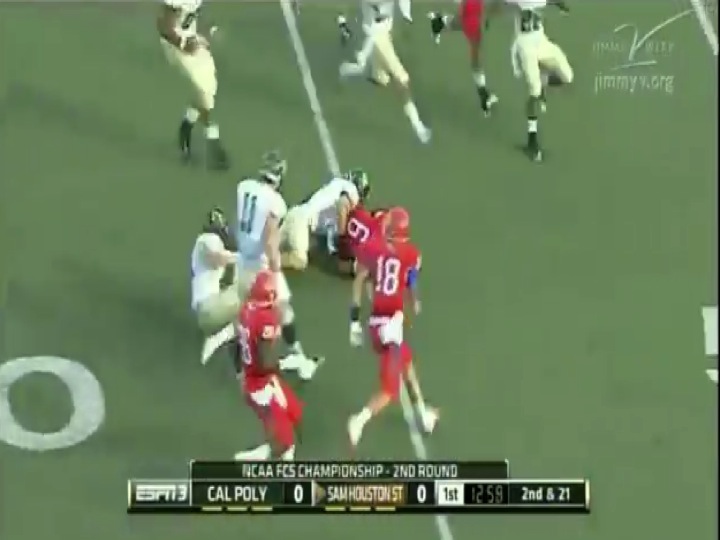 Sam Houston will use this technique out of many different formations.  Below is the same type of triple option play out of the famed "diamond" formation.  While the same concept is applied here, also notice that Sam Houston will change up who the initial dive running back is, and who the pitchman will be.  Above, the dive was carried out by the running back directly behind the quarterback.  Here, the dive is carried out by the running back to the right of the quarterback.  This is a situation in which Sam Houston State hopes the Cal Poly defense recognizes the triple option playcall, recognizes the "arc" block to the right, and hopes that the defense over-pursues in that direction leaving the dive running back plenty of room to run in the opposite direction.  This is yet another concept that is being employed in the highest levels of football to offset defenses trying to adapt against the "arc" block. 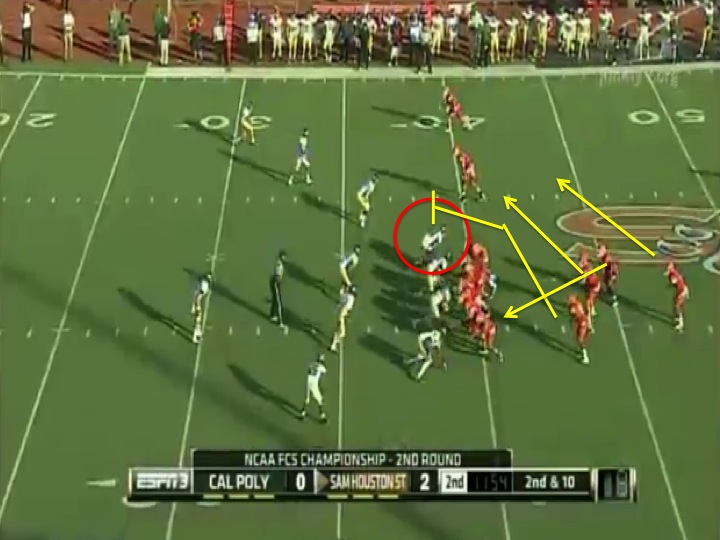 The quarterback will hand off to the dive running back on this play, and he will pick up an easy 11 or 12 yards thanks to the over-pursuit by the linebackers who are more interested in defending the quarterback option rather than the simple dive. 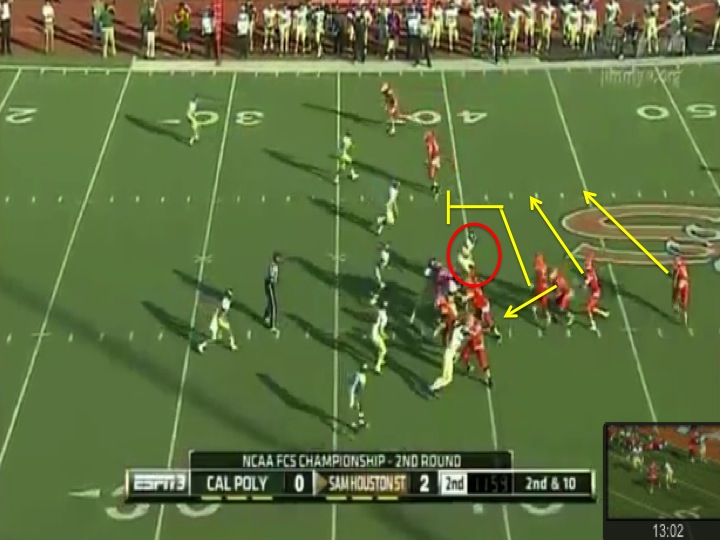 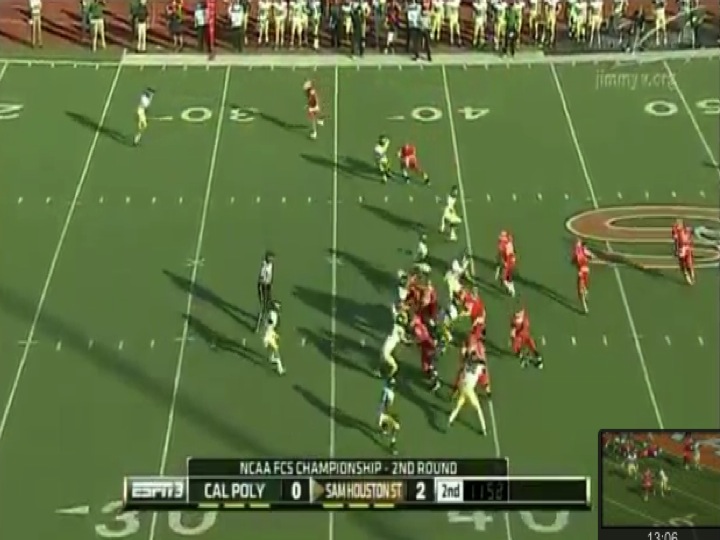 Finally, what makes Sam Houston State interesting is that they will bring this "arc" block from anywhere on the field.  Pictured below, the wide receiver to the top of the image will actually come in motion before the snap of the football.  He will run across the formation and be the "arc" blocker for the quarterback after his option in the backfield.  Note, he will also be assisted by the tight end on that side of the field who will leave the defensive end unblocked to be read, allowing for essentially two blockers to protect the quarterback in the alley. 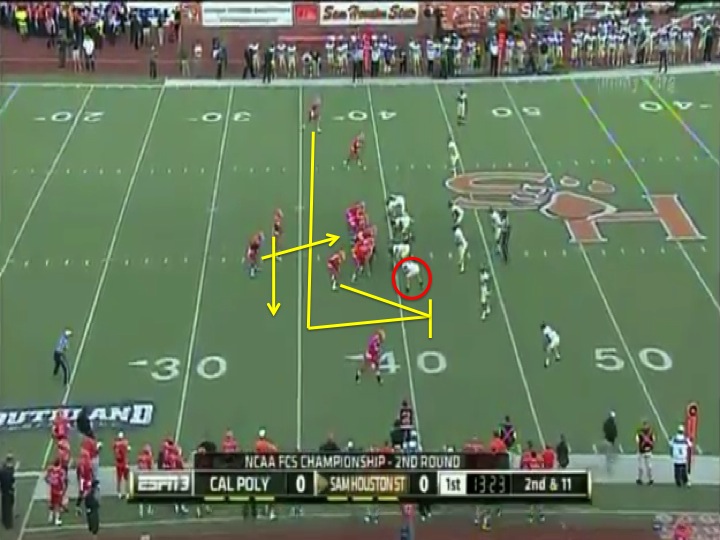 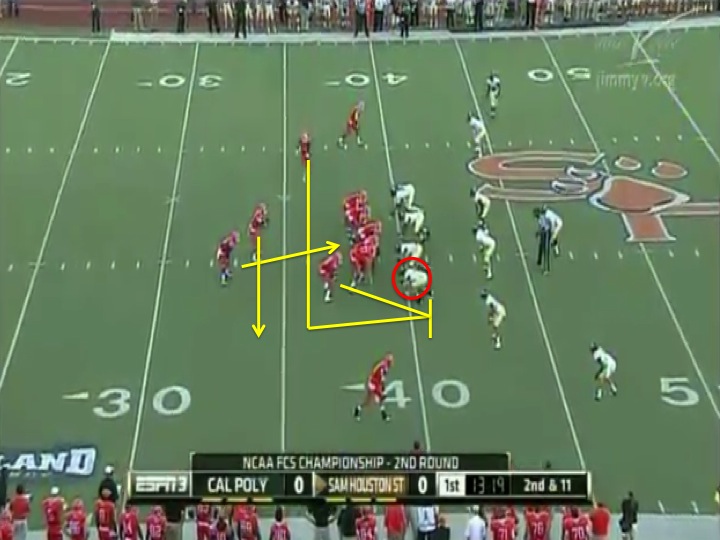 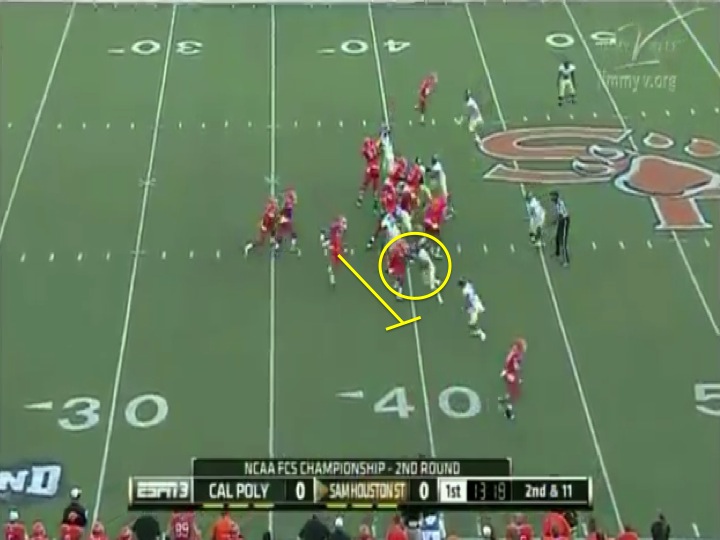 Unfortunately for Sam Houston State, the Cal Poly defense once again tries to force this play back into the middle of the field.  The quarterback doesn't use these extra blockers correctly, and tries to scramble around them, stringing the play out towards the sideline. 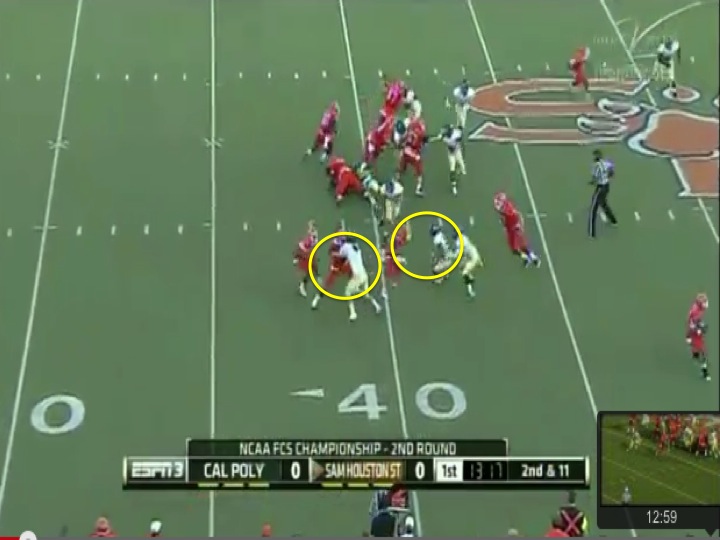 So now we have have seen how Sam Houston State will find numerous ways to employ the same blocking concepts on each play.  It really is fun to watch.  As a defense, the Aggies could use some of Cal Poly's techniques to have safeties like Howard Matthews or Clay Honeycutt crash down to take on the "arc" blocker and string the play out towards the sideline or force the quarterback back into the middle of the field.  Once again, Mark Snyder's defense will be tested in fundamentals as the defense cannot over-pursue on these plays, or else they will be gashed by a simple running back dive.