Analyzing how the Sam Houston Bearkats stack up against Texas A&M’s Fightin’ Texas Aggies in this week's Stat Simulation...

So hoo who thought Rice might put up that many points?  Who thought they might gain that many yards?  This is why the players play the game fellas - because next to no one knew A&M as going to sit so many starters due to suspensions, nor that 9 true freshman would see the field on defense.

Again, there is, in fact, no way to predict these things so early in the season, but this is a fun pastime for me so I do the best to use associated data from the past season and don't dwell too much on the impossibility of extrapolating accurate datapoints from biased historical data forward to this season. So again this week, I am showing a glimpse of what it might have been had these two teams met up at the end of last year.

I did have to do a little finagling and re-sorting of the national rankings to show where SHSU might have been in relation to other FBS teams in the final 2012 stat rankings.  So, I simply replaced all the stats from Colorado with the SHSU stats and re-ranked each list to get the national rankings for each category.

Also, since they are an FCS opponent and we are FBS, I had to change the qualifiers for "Advantage" so that if the Aggies were more than 10 spots ahead in the NR, they got the advantage, but the Bearkats would have to lead by 30 spots in the NR to get the advantage - just a gut feeling there.

(In short; 2012 ≠ 2013 AND FCS < FBS... but there is no way to quantify the differences.  However, I want to paint a picture of what this matchup will look like, so sit down, shut up, and let your eyes take in the glory of my work.) 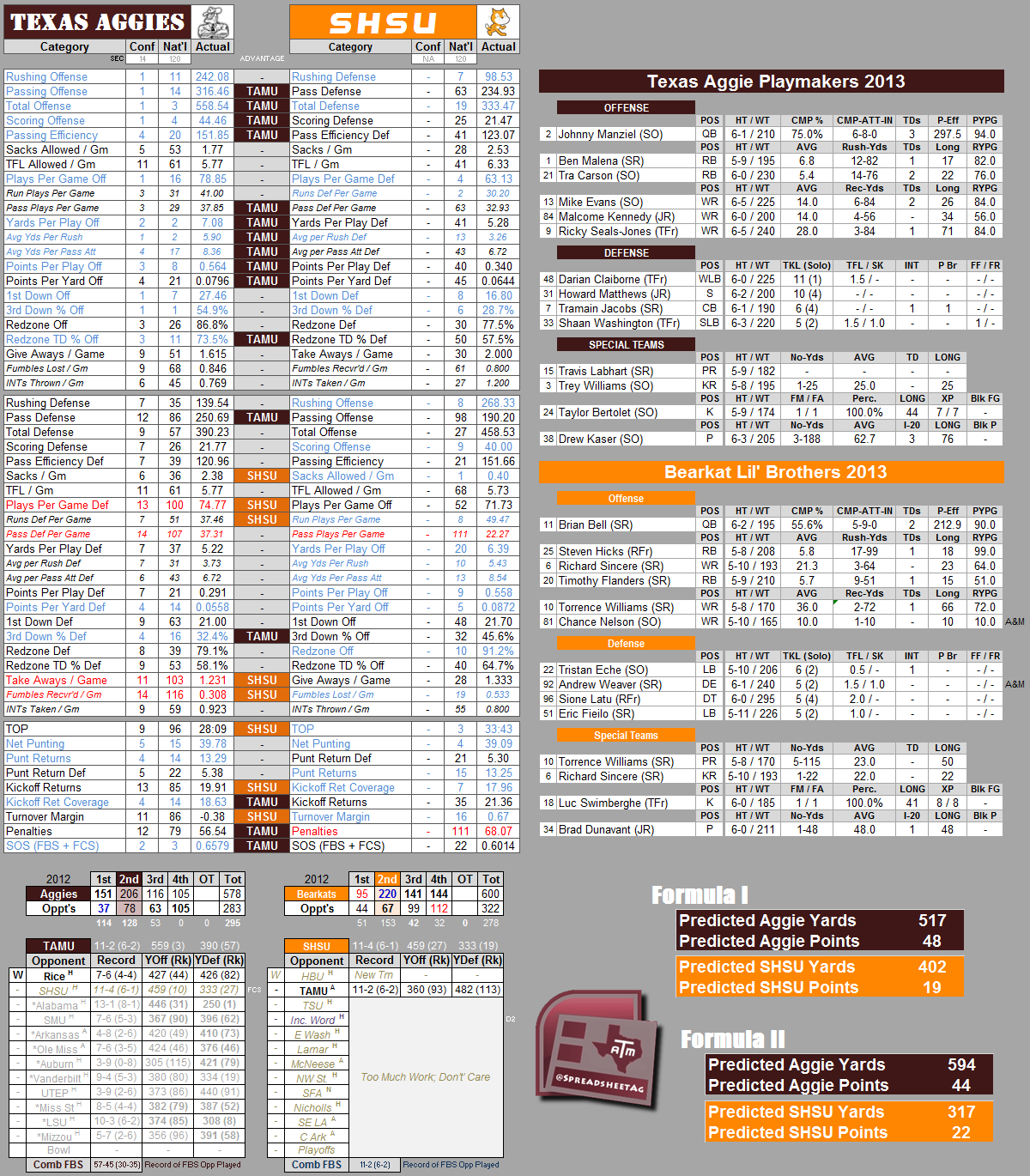 3.  SHSU blocked two (2) punts versus hapless HBU who is in their inaugural season of fielding a college football team.

6.  SHSU had 7 rushers with at least 3 attempts; all of them averaging over 5.0 yards per carry.

8.  Deshazor Everett recorded the 4th most tackles on the team (7, 2 solo) in just under a half of play.

I hope you enjoy this feature and will come back next week to see how the Aggies will fare, statistically, against the Alabama Crimson Tide in Game 3.

Aggies beat "Sam" 56-17, handily.  Johnny starts, plays through the end of the 3rd quarter, scores 6 touchdowns, still does the "Money Rub" gesture, and doesn't get ejected or a PF (Oh, he will be taunted, but will simply walk away this game).

Alabama has won two national championships in a row, but each won was tarnished with a loss - 2011 LSU, 2012 TAMU - and they want that crystal trophy clean and sparkling when they go for it again this year.  Can the Aggies dash those hopes and the dream of a three-peat?  It will be tough, but the game against VaTech exposed some weaknesses in the ‘Bama game, especially on offense - if not for 3 D/ST touchdowns, the final score would have been 14-10.  AJ McCarron barely threw over 100 yards and the team could not muster more than 100 yards on the ground.  They must improve a lot on offense in order to keep up with the Aggie Offensive machine that will surely put some big points on the board.