THE TAILGATE: A Graphical Preview of Texas A&M vs. Sam Houston State

Prediction: This will be the most scrutinized pay-per-view game in the history of college football scrutinization. So why not celebrate it by cashin' out on a flying Bearkat? WHY NOT? Let's do this, ladies and gentlemen.

[C-Mike photo below by Thomas Campbell]

Share All sharing options for: THE TAILGATE: A Graphical Preview of Texas A&M vs. Sam Houston State 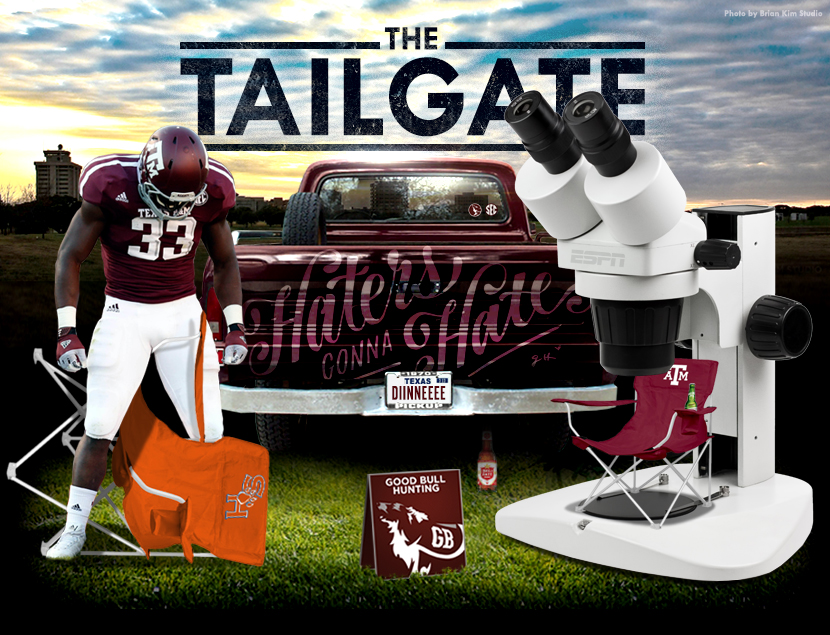 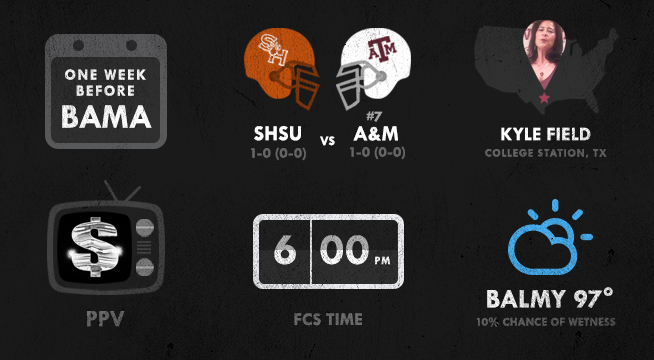 IT'S PRETTY MUCH MY FAVORITE ANIMAL

You know what? I loved last week. You can't convince me to not love everything about last week. Sure, our suspension riddled defense looked a little porous, but they buttoned it up in the second half. We all think Deshazor got the short end of the proverbial stick and Johnny...well, Johnny was Johnny. OK, there was one thing I didn't like about last week, and that was when Johnny appeared to walk through Sumlin after the scoreboard pointing incident. Oh wait, could that have also been misinterpreted by the commentators? NO WAY! Nobody takes anything Johnny does out of context. Ok, last week's in the past. Let's move on to SHSU.

First note on the Bearkats: Here are the top 8 things you should know before attending SHSU. Girl who introduces #5, call me.

Third and final note on the Bearkats: the mascot is neither a Kinkajou nor a Binturong. I didn't make those names up, as you can tell by clicking on the link. If you said you knew what those were before you clicked you are one of three things: an avid Zoobooks reader, a zoology major or a no-good poopy-pants Darren Rovell source. As the article suggests, I've been thinking of a cross between a grizzly bear and a tiger and have tried to come up with a better name than the Bearkat. My current favorite is "Griger" because "Tizzly" just doesn't work AT ALL.

Deshazor Everett sits in the locker room with his iPad propped up in his lap. He's hunched over, staring intently at the video loop on his screen. A bead of sweat forms on his brow and slowly trickles down to his nose and falls to the screen. The Shazor doesn't care. The Shazor feels nothing right now. The rage pulses through his veins as he watches the hit, the flag and the ejection over. And over. And over again. Sitting next to Everett is Johnny Manziel. Manziel has his iPad out, too. He's sending one-finger SnapChats to Mark May.

Sumlin enters the room and whispers "Everyone shut the hell up and listen to me... now." Instantly all players snap to attention. A freshman cries, but he does so silently as to not be flogged. "Who lost control of their team? Stupid media muth..." Sumlin thinks to himself. The players heard that, too. The force is strong with this one.

We find out who has too much damn swag in this game very quickly. Johnny, resting for the bulk of the second half, returns to SnapChatting Mark May. 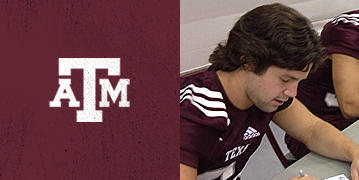 Shampoo Aficionado: His hair has powers we have only dreamed of. 100% on kicks this year. Marvel at its perfect feathering. 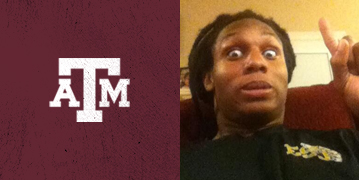 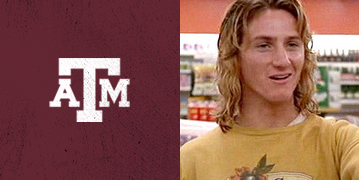 Interception Club Member: He can rock it short or long, man. He's just looking for some good playing time. 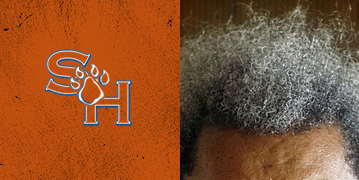 QB: We checked last year to see if he really had Don King hair, but he didn't. No change this year. Do we play them again in the next three years? I have hope. 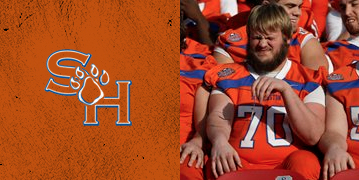 OL #70: Strengths: epic frontiersman beard and six-taloned claw where right hand should be. Weakness: is afraid of cameras and just bit into a lemon. 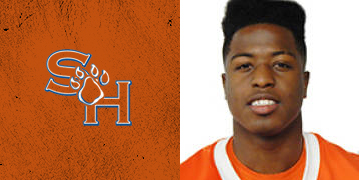 RB: Carries the ball high and tight. The Kid can Play. He's got a short memory that will erase any mistakes he's made automatically. Hair pun. 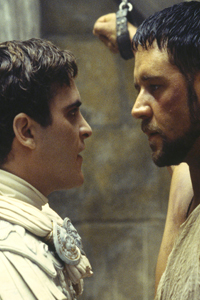 It’s been several days now since the first wave of defensive suspensions was announced, and we still have no idea what type of nefarious deed(s) brought them on. Kudos to the entire athletic department for keeping them under wraps until Saturday morning; after all, if you can keep a secret from TexAgs internet sleuths for two weeks, you’ve really accomplished something. Count me as a fan of this novel approach to prevent complacency from seeping into our program, by the way. As long as we keep winning, I say we should scratch three or four different defensive players before every nonconference game just to keep things exciting. Think of it like that scene in Gladiator when Joaquin Phoenix secretly stabs Russell Crowe in the shoulder before their final bout in order to make the fight more fair. Smile for me now, Mark Snyder!

As of this writing, the announcing team for Saturday hadn’t even been announced yet. It won’t matter. Brace yourselves for 3 hours of self-righteous drivel about Johnny Manziel and how he’s leading our team straight to hell or 1980s Miami, Florida, whichever is worse. (Author’s note: Seriously? Which is more offensive: Johnny flashing the money symbol after a touchdown, or this? Whatever Daeshon Hall did in the 4th quarter, or this?) Sorry, national media. Texas A&M is NOT The U. The ONLY thing I’d want to have in common with those thugs would be to follow this author’s suggestion and take a page from Miami alum Dwayne “The Rock” Johnson’s playbook, because wouldn’t this exchange at a press conference be awesome?

ESPN Reporter: Johnny, I noticed that you wiped some sweat off your brow when you came to the sidelines after scoring your fifth touchdown. Am I correct to assume that all your offseason gallivanting and partying had a detrimental effect on your conditioning, and as such, the only logical conclusion I should draw is that you’re taking the entire program down with you?

JFF: Wow, that was a great question. But I didn’t catch your name.

JFF: IT DOESN’T MATTER WHAT YOUR NAME IS!!!

Or maybe another WWE character is more appropriate. Could you imagine the Ags winning the national championship and JFF ending his on-field interview like so?

I can imagine it. It would probably look like this: 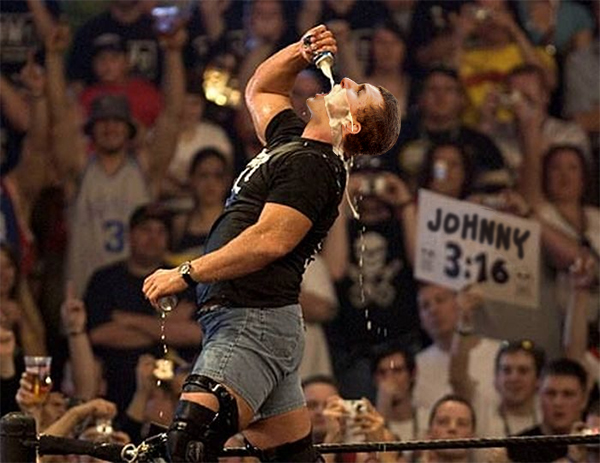 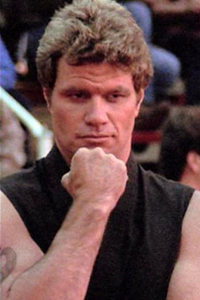 Besides, if A&M did wake up one day and decide to embrace the bad-boy image, there’s someone else from the 1980s I think they should emulate. Think less natural disaster, more natural predator. Instead of trying to be the next Miami, we should go full-on Cobra Kai. The only way I could see Larry Jackson’s workouts getting even more intense would be to import a badass special-forces veteran like Kreese to start practice every day by leading the following chant: “Fear does not exist in this dojo, does it? Pain does not exist in this dojo, does it? Defeat does not exist in this dojo, does it?” Plus, who here wouldn’t cut off their own pinkie toe for a chance to see Kevin Sumlin pull JFF aside during a timeout against Alabama and end the conversation with, “Sweep the leg, Johnny!” right before Manziel leads the team on the winning drive? Cobra Kai…never dies! 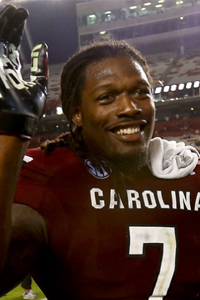 Well, don’t I feel stupid? Last week I thumbed my nose at what many viewed as a higher-profile Clemson-UGA matchup and chose to highlight LSU/TCU instead. “Clemson is overrated,“ I thought, “and Georgia will make short work of them. Besides, we’re in the SEC now and we’re supposed to assume the team from our conference will win every game going away, so much so that it’s safe to talk trash up and down the office hallway and make irresponsible bets with coworkers because THERE IS NO WAY AN OVERRATED TEAM FROM THE ACC CAN HANG WITH THE ‘DAWGS!“ Oops. Which reminds me: Jared in Accounting, if you’re reading this, unless you can produce something in writing, there’s no way I’m following through on this alleged “promise” to show up to Friday morning’s staff meeting in a tiger-print thong. Hey, speaking of things that are overrated, Jadeveon Clowney will be lining up between the hedges on Saturday. Here’s hoping he can at least record a sack or something before he needs an oxygen break. 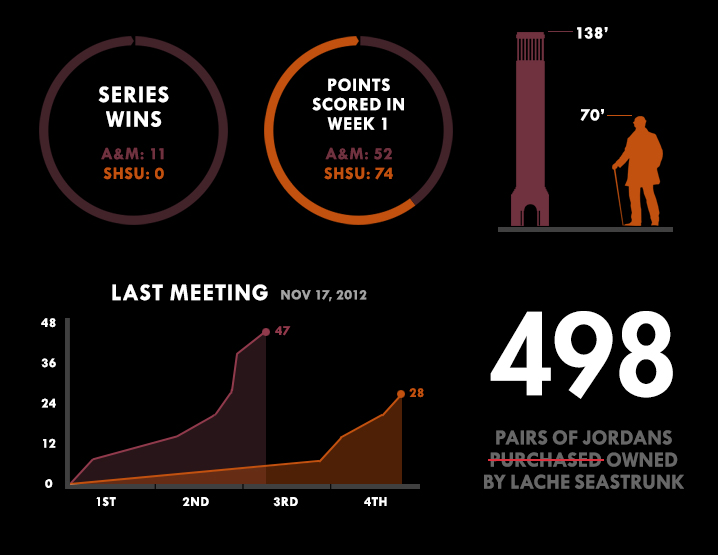 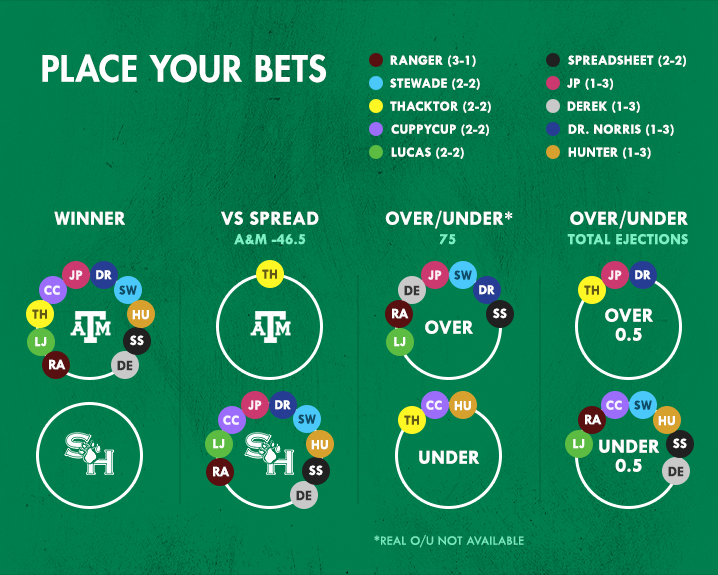 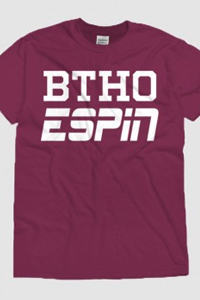 "Alright Johnny Football enough is enough this is your last wake up call STOP BRINGING SHAME TO THE GAME!" - Mark May 7/15/13

"Manziel wants to be the Lindsay Lohan of college football." - Paul Finebaum 9/3/13

Text GOODBULL to 99000 on 9/4 for a chance to win a BTHO ESPiN t-shirt from Aggieland Outfitters.

The best case scenario in this game is improvement. If the defense shows improvement stopping the run that would be a huge step forward. No injuries. No ejections. Manziel throws for 300 and rushes for 100. RSJ and Mike Evans put on a receiving clinic. First Take gets cancelled.

I flirted with the cosmos last week. Not this time. The worst case this week would be our defense looking like they did last week against the run. The thought of this team catching the injury bug keeps me up at night... literally. First Take is renewed into perpetuity and aired on all networks 24/7. MAKE IT STOP PLEASE! 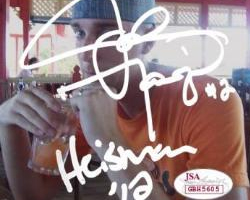 The #GBHTailgate, more informative sports talk in one page than ESPN in the last four days. 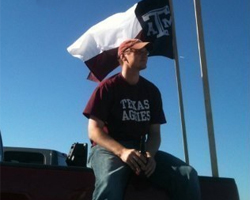 I still have good milk in my fridge I bought before Craig James was hired. #GBHTailgate 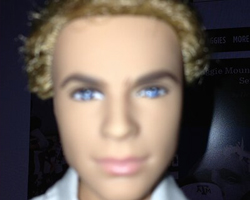 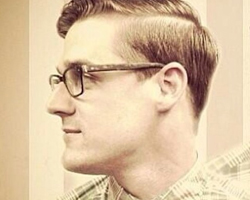 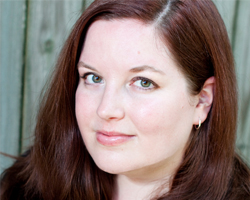 Will you look at this idiot quarterback running his mouth http://www.yourmandevine.com... 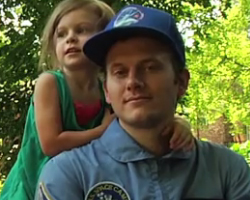 Taking other quarterback celebration gestures as literally as we take Johnny Manziel's: http://sbn.to/14duxj3 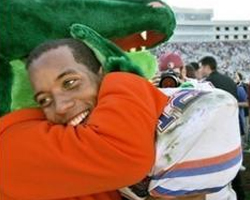 You dicks are being mean to Mack Brown, so look at who he DID recruit: http://sports.yahoo.com/foot...