Much has been made of Johnny "Cashin Out" this weekend...basically a hand motion as if he were counting money. It's been used in the ongoing narrative about how Johnny is selfish, spoiled blah blah blah.

Is it worth mentioning that Tajh Boyd did the same thing? Nah. ESPNs quest to turn Johnny Football into Johnny Narrative must live on.

At today's Tuesday press conference, my personal favorite player Ben Malena had a few words to say about the entire "Cashin Out" phenomena:

Ben Malena said the 'sign' toward the sky doesn't have a significant meaning it's just a 'fun gesture' the guys made up.

Malena said 'the sign' definitely does not mean 'show me the money' and it has nothing to do with rapper Drake.

As Ben was walking off, he dropped this too

As he walks off of the podium, Ben Malena laughs while saying, "I don't know why it's (the hand gesturing) such a big deal now."

If that weren't awesome enough, Ben then tweeted "#CashinOut"...but has since deleted that tweet. I love this guy. I love it. By that single act, he showed that he's got his QBs back, and that this team isn't taking criticism seriously. So the media wants to say that Cashin Out is a Johnny thing...but let's not let facts get in the way. This picture is from the Meineke Car Care Bowl in 2011 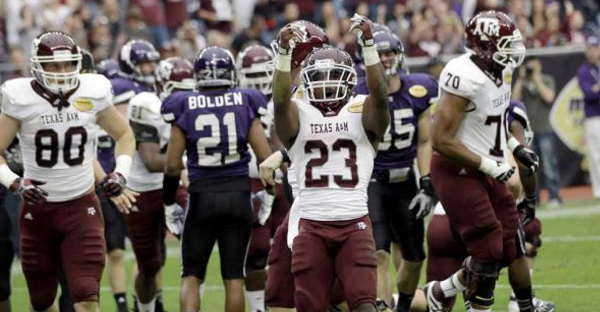 The Car Care Bowl was well before Johnny Football hit the stage. It was under a completely different regime/era/culture of A&M football.

The angst behind Cashin Out is absurd. It's something we've done for years and now the overarching narrative painting A&M as villains has media folks falling over themselves to come down on us for what it might mean (based on what they think it means). It seems to be the theme of coverage of A&M this year, whether it be Johnny, or anyone else on the team.

So I say we embrace it. I say #CashinOut should become the theme for this year. Put it on your twitter profiles. Tweet it out. Use it in your daily vernacular. #CashinOut now represents us against the world. Doesn't matter what folks say. We're going to do what we've always done.