Some parting thoughts before moving onto the Sam Houston State Manbearkats.

Drink of the Night: Sake bomb

It's a bit stronger than you originally thought. Tries it's best to knock you on your ass, but you get through the night just fine. Side effects may include signing air autographs, rubbing your fingers suggestively, and pointing at numbers.

A shot for all of our suspended players.

Aggie football is back, y'all. And we brought PYROTECHNICS.

Random thought from Sat. I'm a fan of the new additions to the team entrance. Pyrotechnics and dance team look good. pic.twitter.com/PwuKxeAGGc

Despite having some defensive struggles throughout the game, it was great seeing the team visibly excited to be back. There was trash talking, hand gestures, mid-air collision celebrations, and more. I remember seeing a technically still suspended Johnny rushing out onto the field after Ricky Seals-Jones' first TD. The ref was not amused. But you know what?

According to the participation report, 15 true freshman played yesterday including Wiggins, Larue, Garner, and Ellis

I'm sure a lot of these came from the suspensions, but I think it's great that these guys got to play as true freshmen in the first game of the season on Kyle Field. I never played football, but I can imagine that's an awesome feeling. They got some great in-game experience. Congrats, boys. Here's to you.

While Johnny was doin' time, Matt Joeckel led the offense to 28 points in the first half. I'll be honest - I was in the "Let Hill start" camp but Matt put me in my place. I thought it was especially great that his brother was in town to watch him on his first college start. He did great and I think he deserves recognition for it.

It's been a rough off-season. Even though the 24-hour ESPN machine is still hard at work, we got to see #2 out on the field making plays. The off-season is done, now let's let him play some damn football. 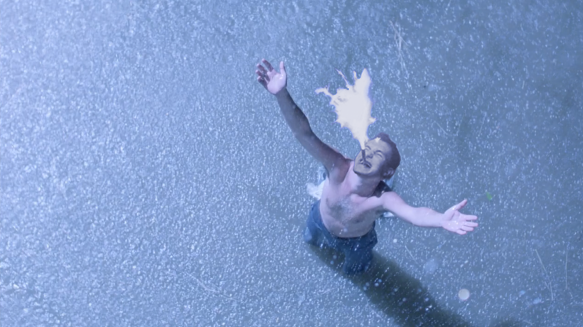 Johnny Manziel, who crawled through an off-season of shit and came out clean on the other side.

I know at this point it's beating a dead horse, but seriously this is getting ridiculous. I haven't rewatched the game yet but from what I've read the announcers were covering Johnny in the FIRST HALF THAT HE WASN'T PLAYING. Here's a novel idea - why don't you cover the play-by-play of the game that's actually happening in front of your very eyes instead of continuously talking about the quarterback THAT THE DICKBAG "JOURNALISTS" AT YOUR NETWORK HELPED GET SIDELINED WITH YOUR INCESSANT AUTOGRAPH WITCH HUNT. Also let's selectively demonize certain players for their excitement, trash talking, hand gestures, etc. so that it fits our narrative.

Steven Jenkins, Gavin Stansbury, De'Vante Harris and Ed Pope were all suspended for two games for "violating team rules". The rumor I saw going around was that the suspensions involved marijuana. For now, let's assume that's what happened. Look, I'm the first person to say I think the fact it's still illegal is ridiculous but just because I think that doesn't make it any less illegal (or against team rules). Not only do they lose playing time, but we've seen how it can affect our defense as a whole. I mean these guys won't get any in-game snaps until Alabama rolls into town, which is a bit unnerving. I'm not here to judge them and say they did something morally wrong, but they are scholarship athletes and I hope they understand the potential consequences of their decisions. Unless the rumors were all wrong and they were suspended for capturing the Rice Owl mascot and setting it free. If so, good on you boys!

I know it's not an owl, but just use your damn imagination.

I'll leave the football analysis to our knowledgeable authors, but to my untrained eye our defense was, uh... not that great. Their WR Jordan Taylor just ate us up and their RBs continuously blew through us. Like I mentioned before I'm glad we got a lot of young guys out there to get experience, but it's a bit unsettling that we struggled as much as we did with our 2nd team guys in there. Let's hope they see some progress into the SHSU game, so we don't see any of this the week following it:

3rd Deck from the Sun

Seriously the heat is a bitch. From all the people I talked to this one was close to the '07 Fresno St game. Can't we use that SEC money to buy us some night games?

I'm so very happy that Aggie football is back. It wasn't the prettiest game at times, but we got through a hot day full of ESPN's bullshit with a win, some experience, a good game for our quarterbacks, and some awesome t-shirts:

We got new uniforms for today's game. @CollegeGameDay #TAMUvsRICE pic.twitter.com/JuSvtel1gh