Would Kevin Sumlin leave for the USC job?

With the news of USC firing head coach Lane Kiffin, I re-examined how Kevin Sumlin fits into the coaching carousel.

Share All sharing options for: Would Kevin Sumlin leave for the USC job?

Last summer, I wrote a fanpost that looked at historical reasons why a head coach would choose to leave one program for another, specifically to answer the question of whether Kevin Sumlin would leave Texas A&M if the USC job opened up. Given the news of Lane Kiffin being fired, I think we should revisit the topic. Here's what some in the media are saying:

Homerun hire for USC is Kevin Sumlin. He checks all the boxes, starting with great coach, great recruiter. & he knows big-time college FB.

You're going to hear Sumlin's name come up for the USC job. My thought: If A&M will pay $450 mill for a stadium redux, it'll pay its coach.

To start, I put together a table examining the winningest programs in college football history. This table shows the year of the hire, the last institution where the coach worked, and the coach's former position (e.g. OC, DC, HC). 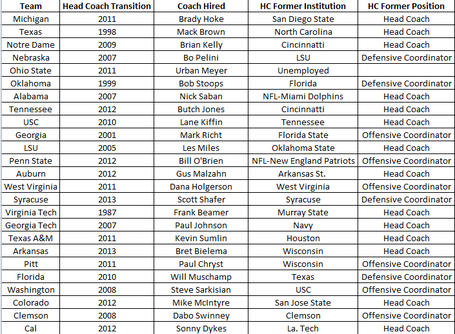 Based on this table, there is only one situation where a coach left one program on this list for another... and, funny enough, it was Lane Kiffin leaving Tennessee for USC. Beyond that transition, the only two comparable moves are Les Miles going from Oklahoma State to LSU and Brett Bielema leaving Wisconsin for Arkansas.

There are three main reasons a coach would leave one top tier program for another. Before I get there, yes I understand that there are folks who think the Texas A&M job is on a lower tier than the USC job. Those folks are dumb and can step off. Back to the three reasons:

1) One school provides something another school cannot.

Whether it's financial or fan support, the coach in question has to feel as if he is unable to get something at one school that the other school can provide. In the case of Bielema, Wisconsin balked at giving him more money to pay his assistants.

So the question for Aggie fans becomes whether Kevin Sumlin feels that USC can offer him something that A&M can't... and for the life of me I can't figure out what it would be. Given our recent fundraising milestones, money really doesn't seem to be an issue. So tell me what, tangibly, can USC provide that A&M can't? And by tangibly, I mean don't say "prestige" or something vague like that.

2) The coach feels a connection to the university.

There's a reason that Michigan had a real shot at getting Les Miles to leave LSU. Les is a Michigan man and he likely has a deep emotional connection to the institution. The same is true for Lane Kiffin... he was connected to USC through his experiences there, so the thought of going "back home" was something that might have appealed to him.

What connection does Kevin Sumlin have to USC? He's from Alabama and played his college ball at Purdue. He has no West Coast connections as far as I know.

3) The coach is looking for an out.

Some situations are just toxic. Scipio Tex over at Barking Carnival gave us a great example (though it might be a bit of an apples to oranges comparison) regarding Bryan Harsin leaving UT. Some situations are just bad, whether it stems from a poor relationship with an AD or getting out before you get fired like Houston Nutt at Arkansas. Sometimes leaving is just the best option. None of that fits for Kevin Sumlin.

So with that in mind, below are a few names for the USC job that fit at least 2/3 of those parameters:

Vandy cannot offer what USC can offer. Vandy does not have fan support. Vandy is also in the middle of a sex scandal. It might be time for Franklin to leave.

The elusive white whale of coaching. Is this the job that can finally make him leave?

Familiarity with the area. USC has a much higher profile than Oregon State. Oh and hey, look at that, he coached at USC in the 90s.

The bottom line is that coaches don't leave one good situation for another on a whim. There has to be a good, concrete reason...and there's no reason why Kevin Sumlin would leave Texas A&M for USC right now.