Bret Bielema, like many children, started out life in a small American town. In Bret's case, his past is rooted in Prophetstown, IL; a typical one main street community where many of us will decide to build our caskets when the big city life is over.

Like most children growing up in towns with a 97.92% white population, Bret was fascinated by hip hop culture. His education started innocently enough. Every time his parents would leave the house to serve fried cheese curds at the church potluck, little Bret would run to the living room, turn on 106 & Park, and throw his fingers and hips in different positions towards the TV. He didn't know what any of it meant, but it all felt so natural to him.

But, the writing was on the wall. Bret, at only the tender chubby age of 7, had thrown his first gang sign. 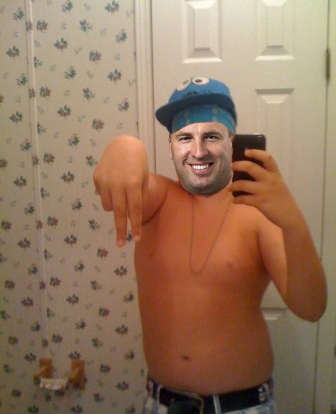 The disease infecting the youth of America. Studies currently show that gang signs have direct and catastrophic slippery-slope effects that leave outside observers questioning one's arrogance, cockiness, and leadership at every turn. Sometimes this disease hits closer to home than we'd like.

As a young man Bret had dreams and aspirations to become a head football coach. He started off the right way by assistant coaching in Iowa, co-defensive coordinator for Kansas State and Wisconsin-Madison. His X's and O's knowledge was second to none, his confidence was permeating from every eyebrow expression, and most importantly, he had hidden his true desires from the outside world.

His big day finally came. Barry Alvarez, having seen him do nothing in public that would have the outside world question his abilities, stepped down from the throne at Wisconsin, appointing Bret as the successor.

Now in charge, Bret was off to early success. He was well on his way to his goals of being an unmarried childless coaching sensation when it hit again. The sensation to not give a damn what anyone else thought. To live his life the way he wanted without being Lou Holtz choked... To be free.

In an act of desperation Bret closed his eyes, threw his hands to the sky towards his fans, and prayed whatever his fingers did would be understood. 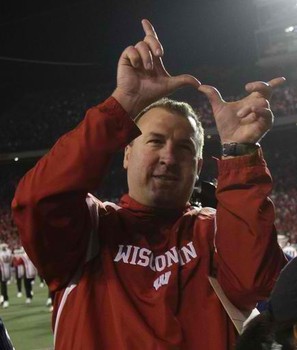 Bret had dodged a bullet. Not realizing the "W" stood for an obscure weed reference, and without understanding it's origin, the crowd cheered and decided to make this their de-facto hand sign for eternity, or until something new came along.

Even after this outburst, he still felt a desire for more.

Bret rushed home, threw off his trademarked running suit, turned up his 2002 Clipse CD, and started to grind as hard as he could.

Overwhelming desire to twerk the night away was crippling him. He booked the next flight to the only place where people aren't expected to explain themselves; where meetings of chance between people who eventually marry aren't questioned for one moment. Bret headed to Vegas.

Bret decided to get it all out on this trip. He would dance, drink, gamble... he would do everything that an assumed sports role model would be overly criticized for during the season.

Bret started his night off in the clubs. Feeling immediately in his element, he thrust two fingers to the sky, and motioned them towards people he had never met before. With his rosy complexion and soft thin hair, he was able to approach any woman for a dance, and she, in a Molly induced frenzy, would feel completely at ease.

Unfortunately for Bret, living his entire life in the Midwest had left him without an understanding of the club rat breed. He never realized that a woman who would give herself so freely could belong to another man. He had become "Sancho".

Now Bret was expected - as most public sports figures are - to be humble and accepting of his punishment regardless of circumstance. Bret realized the seriousness of his error, and accepted the Jeremy Hill-ing he was about to receive. It was a moment that changed his life forever.

Beaten and alone, Bret didn't know what to do. As he lay there, he realized that he needed a change in his life. Determined to get his answer he waited, lying on his unsightly Vegas hotel carpet for hours, when unexpectedly he started to smell something.

Hamburgers? He thought to himself.

Bret - a man normally filled with what would be characterized as an over-abundance of self control - shot awake. What he saw amazed him.

A woman, much much younger than he, wearing an apparatus that makes even the most beautiful of women look beastly, was standing above him with food in hand.

Befuddled, Bret asked her "Who are you?"

The youthful blonde, finding the whole situation humorous enough to tweet about with a capital "LOL", leaned down in her also-her-underwear bikini, presented her double meat offering, and said one word.

He continued to ogle her from head to hamburger, until uttering the first response that came.

The answer had come.

Bret didn't know what to make of this woman. She wasn't like the typical Midwestern women he was used to not having a relationship with. She wasn't wearing any tacky jewelry or still-new 1970's styles. She was different.

He decided then that he wasn't going to care about what people thought of him any longer, and he married his millennial bride.

He was looking for change and the call came quickly. A southern school tired of hot piss and smiles heard that he would be interested in changing his venue. Before committing, Bret was determined to see one of their games.

He left his new bride and two child-replacement dogs at home and headed to Jerryworld, the true venue for a small town college football experience. It was here, in a moment of excitement that he fooled himself into thinking could last forever, that he found his future team.

Bret made his move to a place known for embracing change and the "dirty south" culture he yearned for. A place where the state pronunciation has to be written into law. Bret was on his way to Arkansas.

His new fan base - beaten down by coaches filled with scandals and schizophrenia - were ecstatic at their new hire.

"Pure as the dawn on the brow of thy beauty" they thought.

Finally, a man to bring them back to a world before Houston Nutt learned how to text. Bret had found a place where his short but stellar resume could be put to use, and a fan base who would embrace he and his "are you SURE you checked her ID?" wife for who they are, gang signs and all. 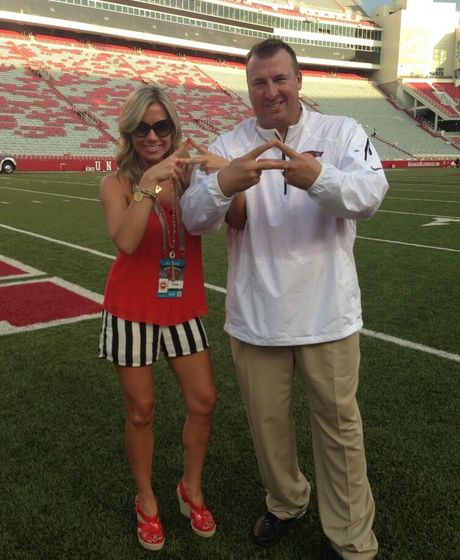 The Arkansas fans accepted him, and so he accepts them. 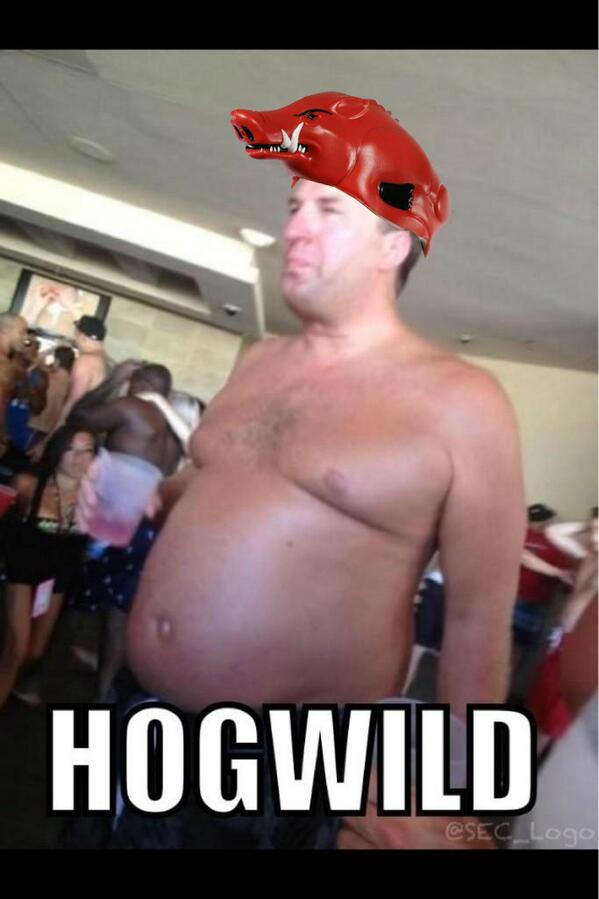 WPS and Good Luck Arkansas fans. I honestly hope this one works out for you.