Your Friday links and venting.

Include your name, where you're from, phone number (optional), and a description of any images or videos.
Road Trip by Aggieland Outfitters 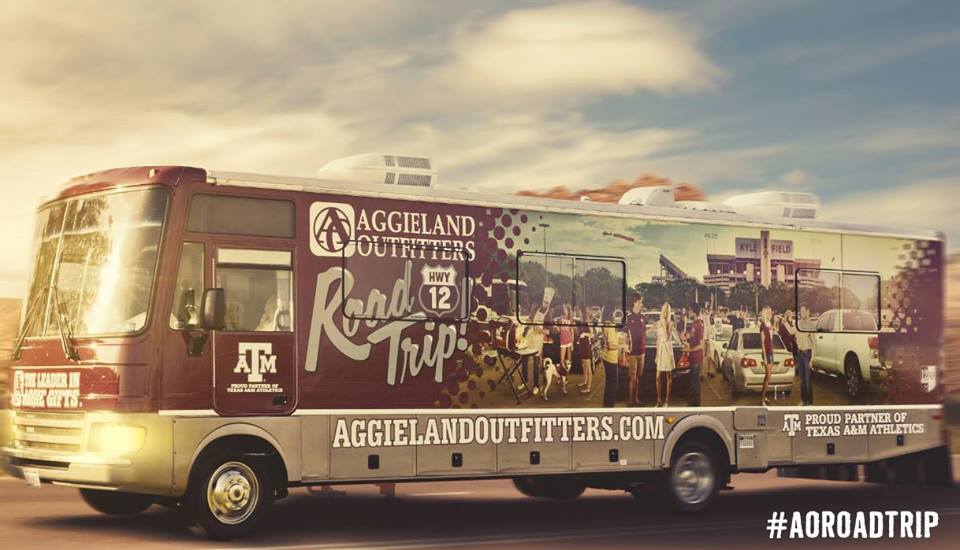 Join us on the road!

THE BAND IS BANNED. News came down yesterday that the pulse of the Spirit of Aggieland, the nationally famous Fightin' Texas Aggie Band will not be allowed to play during halftime of the Arkansas game. To make matters worse, Arkansas does not allow any live mascots on their home field, so Lady Reveille is forbidden from attending as well.

NO MATTER, WE STILL KEEP IT CLASSY. Dr. Camacho and ColoradoAg were kind to answer Arkansas Fight's questions. They discuss our penchant for commemorative t-shirts, rational A&M fans, and of course, BBQ.

MALCOME IN THE MIDDLE. While Mike Evans has dominated on the edges, Malcome Kennedy has found a rhythm of his own. The product of Class 1A Cayuga, TX has 19 catches and 4 touchdowns on the season, continuing to shine since busting out against Alabama last year. Look for him to have another big game this weekend against a depleted Arkansas secondary. If Gary Nova can do it, Johnny should really make the Pigs squeal.

NO RUSH, THERE SHOULD BE PLENTY TO GO AROUND. Do you wax nostalgic for the days of Brian Barone? Well for the bargain price of $36 (plus tax) you can purchase a brick. Yes, A&M is selling the remnants of the "Holler House On The Brazos". I will never forget watching Tony Barone and Co. ruin a chance to go defeated in conference play by beating Baylor 80-75 in the last basketball game played in Jolly Rollie. Funny, I didn't realize till now that was an historic event of sorts. There were lots of bricks in those days.

FRIDAY SOAPBOX. Last week I implored the 12th Man to embrace and encourage our young defense, and they came through in fine style. With tomorrow being the last time the Aggies will visit Fayetteville until 2025, my vitriol against "neutral-site" games has been stirred. These games serve no purpose! Why is LSU playing Wisconsin in Houston? Why did A&M play Florida State in The Meadowlands? College football is for the fans! It's about student sections. It's about alumni returning to their college stomping grounds to tell lies about their exploits during their time in school at their favorite tailgating spot. It's NOT about filling the pockets of ESPN or Jerry Jones. We don't need or want these in season bowl games. We don't like them. I would much rather watch Wisconsin subjected to the terrors of Baton Rouge and "Saturday Night Live" than watch some cold, artificial kind of "SEC/B1G ANNUAL MATCHUP" in Reliant Stadium. And wouldn't want to see LSU head to Madison and let SEC fans show those B1G cats what a Fifth Quarter is all about. I couldn't give two shits about two college teams playing in Lambeau.

Words fail me at the moment, so I'll turn to my compatriot and fellow neutral site hater ColoradoAg for illustration.

Here is his description of JerryWorld:

It’s a bio-dome for foreclosed McMansion Millionaires who get more fulfillment telling people they went to the Cowboys game than the actual football itself. The shrine is cavernous, quiet, and boasts a wildly unnecessary television that screams Truck Nutz on a leased Escalade.

That's the perfect metaphor for neutral site games. Truck Nutz. Unnecessary played out accessories that are so obnoxious and tacky that they ruin any others appreciation of your product.

I wish I could make it to Fayetteville this weekend. Truly, it is a great place to watch a game. Donald W. Reynolds Razorback Stadium is a great venue, and Dickson Street is the closest thing to Northgate in the SEC (apologies to LSU and Tigerland). So if you are going, count yourself blessed. There are some of us who will be dead before the Aggies return to Northwest Arkansas.

Have a great Friday, Ags. Stay tuned for Stringsays' always entertaining ALL CAPS PREVIEW and remember to SMILE!