Analyzing how the Arkansas Razorbacks stack up against Texas A&M’s Fightin’ Texas Aggies in this week's Stat Simulation...

I didn't believe it when I saw it, but this game might be closer than a lot of Aggies and other outsiders think.  Arkansas has a potent running offense, two effective tailbacks, some big dudes up front on the offensive line, and a huge freshman tight end (remember when our linebackers couldn't tackle the Alabama tight end? This guy scares me).

Arkansas dominates the stat-lines in their offense versus our defense, but my gut is trying to convince my head that it's time for another pulled pork sandwich not that big a deal.  The Arkansas defense has played a couple of inept sisters-of-the-poor type of teams which probably pads their offensive and defensive stats (neither of which are glamorous).

However, the Aggie defense is just awful so far this year.  They looked better against SMU, but still gave up 434 yards.  If you are looking for a silver lining from that game, the Aggies rolled out a few new defensive starters ("youngsters") and only gave up 93 yards on the ground, 20 below SMU's average on the season - on the flip side, they allowed 5.5 per rush.

Hey, have you guys ever seen the work they've done over at StatMilk? You can compare any two teams in the nations and pretty match up like-for-like statistics, but you can't take them offense vs defense head-to-head like I do here... It's very interesting stuff though with automated INFOGRAPHICS! 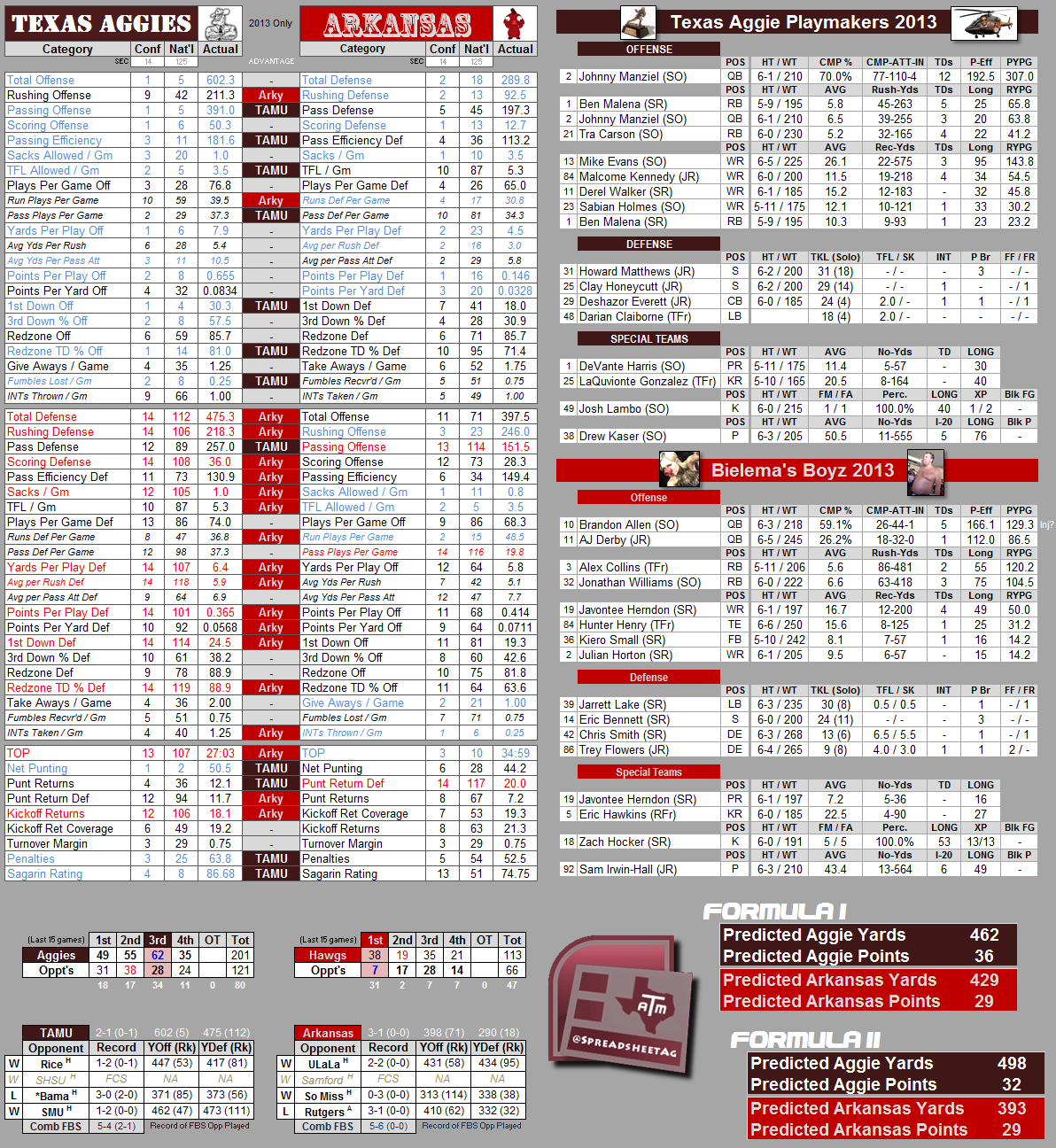 4. Texas A&M scores a touchdown every 12.4 plays while Arkansas takes 22.8 plays between touchdowns on average.

5. Mike Evans is only 31 yards away from passing the entire Arkansas offense in receiving yardage combined (575 to 606).

Aggies beat the Razorbacks 38-27 in a game that is too close for comfort, but shows an improving Aggie defense.  Josh Lambo misses a FG and they decide to just let Johnny kick them all from now on.

Tune in to #23 Ole Miss at #1 Alabama to get a forward glimpse of our next opponent.

Bye weeks are sad weeks.  So on October 5th, check out the Missouri vs Vanderbilt game to see our two SEC-East opponents for 2013 go at it.