Today marks one of my favorite traditions at Texas A&M. Years of hard work and late nights culminating in finally being able to wear a shiny Aggie Ring that I will never take off until the day I die. Congratulations to all the Aggies enjoying their new hardware today.

I thought in light of such a great tradition it would be a good time to share some thoughts I had with my recent visit to the Texas A&M campus during Bama weekend.

I will start off by saying I love Texas A&M and being back on campus gave me goosebumps. There is no place in the world that creates an atmosphere like that and it brings back memories in an instant. I appreciate the school and our traditions so much because I lived them wholeheartedly and I want current and future students to feel the same. Obviously things change and I don't want to sound like Mr. Grumpy Ol Ag since I only graduated 3.5 years ago, but it is worth having the discussion. I missed the camaraderie brought on through Bonfire; I wasn't there with General Rudder and a compulsory Corps of Cadets; I didn't have to fight off wolves from my tent as a fish, but my experiences still changed my life.

I was shocked at the state of the Corps of Cadets. I have always enjoyed step-off and march in prior to games, and often make my way to the Quad for the firing of '02. I excitedly made my way over to watch the Corps units having good bull while forming up and I didn't see anything. Corps fish were walking, talking to each other openly, stepping on Pisshead blocks and a number of probably insignificant things to non-Corps members. As a note for those not in the Corps, fish were always running and wildcatting, never allowed to talk on the Quad, and weren't allowed to step on certain square blocks until their sophomore year. These things sound silly, but it was all part of the game that made the Corps fun and made you feel like you were earning something. The most shocking part was that I really didn't hear any yelling at all. No fish sounding off to their upperclassmen, no campos, not even a single outfit hump-it. When I was a fish these things were all FUN to me. It gave me a chance to show off to my parents and other onlookers that I was really challenging myself. I have heard from several people that the Corps is taking the approach of being more professional, which apparently means taking all of the fun out of the experience. "Just get dressed, line up, walk down the street and do what you're told". I didn't see the passion and unity that I felt when I was a fish, but maybe they are making it difficult in other ways. I have thicker skin than most and had to do plenty of things that would probably be described as hazing, but most the time I laughed about it because it was entertaining or I got in trouble for being mischievous. BQs might get mad at me for this, but more than once I managed to steal a drumstick while the band marched by. The point is that I had a lot of FUN and march ins were a reward for me at the end of a difficult week. This Corps looks much more robotic professional. I just don't like seeing the most enjoyable things about the Corps disappear.

I am not going to harp on this too much, but I have never appreciated this guy. I have a different perspective than most of you because I was a Yell Leader. I'm sure he has the best intentions of keeping the crowd loud, but I always found it a little insulting. There are reasons we don't lead yells constantly throughout the game. I even heard from several friends that were offended because visor guy led yells while the band was playing. It all seems like a cry for attention to me, from a guy who doesn't trust us as elected officials to do our jobs properly. I realize I have a unique perspective and students seem to enjoy him, even if they do the yells ironically, but I would think that a guy class of '99 would at least by now know how to actually do the hand signals correctly. This is just a personal opinion, but I will continue ignoring him.

Nope. That is all. Not at the expense of the senior boot line.

The Batt ran an article on this earlier this week and a few people asked me to address it in this fanpost. The gist of the story is that graduate students at Texas A&M don't feel as deeply engrained in the traditions and often get heckled for whooping because undergrads don't think they have earned it. I think both viewpoints are pretty ridiculous. Firstly, graduate students get Aggie Rings just like the rest of us. They didn't put in four hard years to earn it, so should we give them an alternate Aggie Ring denoting their inferiority? Obviously, the answer is no. They aren't lesser Aggies because it took them longer to get here. Secondly, do the senior wildcat. I'm pretty sure my dad whoops up and he didn't even go to A&M. What am I going to do, smoke him for pulling out?

This is really the biggest disappointment here. You can write the previous things off to me being a disgruntled Former Student yelling GET OFF MY LAWN YOU CRAZY KIDS. This decision has been public for a while, but just recently gained some steam. The university has removed the 21 gun salute and military funeral for our beloved mascot, Reveille. To make things worse, the decision just kind of happened, allowing for zero student input. When there was a little bit of push back from students I don't believe the Corps of Cadets Commandant (who announced the decision) handled the situation very well. You can read a full report on the situation from The Good Bull. 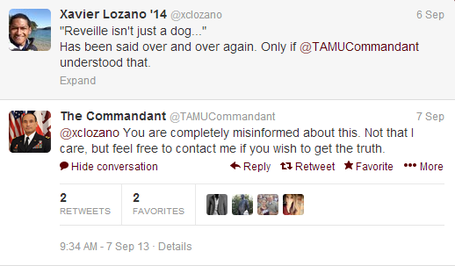 For someone striving to make the Corps more ‘professional' he isn't demonstrating this trait very well. Honestly, I doubt it was even his decision. This sounds like one of those things that goes much higher and was pushed down to the commandant to make the announcement. I just don't quite understand the reasoning behind removing her military funeral status. Reveille was the original mascot for the Corps of Cadets when all its' members were entering the service. Just because she is the mascot for an entire university now doesn't lessen her initial purpose of morale for future soldiers. If they removed her status due to the fact that she isn't an actual member of the military then why do we play taps and have 21 gun salutes for Silver Taps and Muster? These are two of Texas A&M's greatest traditions and I would be devastated if they ever changed. You could make the same argument for all three that they don't necessarily involve current or former military (although Muster is likely to involve several). This is a situation where a tradition is being changed just for the sake of changing it and I think the students deserve to be heard on this one.

These are just my opinions on a few things and I am open to discussion on every point. Please comment or reach me on Twitter.

Since this article seemed extremely negative, I will say that I love A&M and sometimes change is good. I also believe it is healthy to ask questions about why change is happening.

And here are two GIFs to make everyone happy again. I realize we didn't win this game, but given our past propensity to let games get away from us, it was refreshing to see the Aggies mount a comeback. Now that is a tradition worth changing.