The Aggie defense, missing several starters due to suspension, had a lackluster performance against Rice in the season opener. A lot of the poor play was due to missed assignments.

Last Thursday, we talked about how this opener was going to be a true test for Aggie defensive coordinator Mark Snyder and a testament to how well he prepares his players. I mentioned that the Aggie defenders must play their gaps and know their assignments to limit the Rice option attack. Quite simply, they didn't do that. This was especially true at the beginning of the game, but the Aggie defense did get better as the game progressed. Where did they go wrong?

A perfect example of missed assignments is Taylor McHargue's 57-yard run on Rice's opening drive of the game. First off, Rice is lined up in the pistol and is actually in a tackle-over formation, meaning the right tackle has moved to the left side of the line and a tight end has taken his place next to the guard. I'm fairly certain our defense doesn't recognize this at all. If they did, they would probably shift the defensive line to the strong (extra offensive lineman) side.

Either way, this is the first look our defense gives Rice. Notice the corner to the top is covering Jordan Taylor and Toney Hurd Jr. is close to the line (both highlighted). 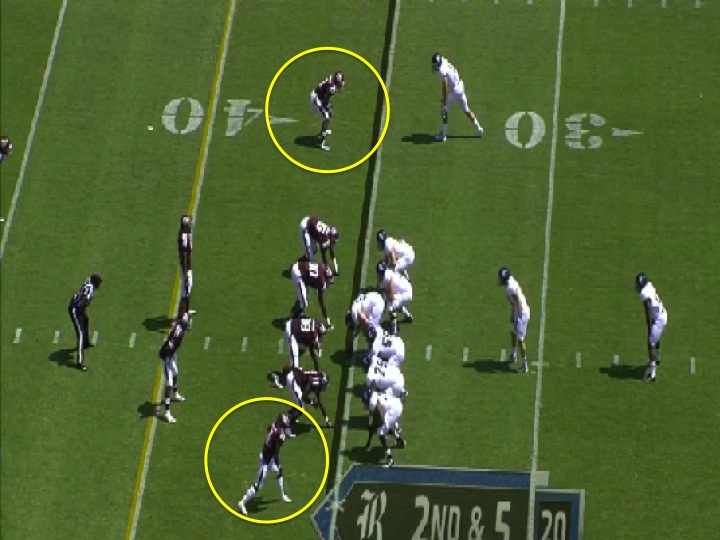 All game long, Mark Snyder tried to disguise where a blitz was coming from and what coverage we were playing. After we give them that first look, we quickly shift Hurd Jr. back off the line to cover a slot receiver (not pictured), and the corner to the top comes in ready to blitz off the edge. Remember we mentioned that this was one call Mark Snyder could use to help the Aggie defense defend Rice's option attack. Unfortunately for A&M, this blitz call was to the wrong side of the field. 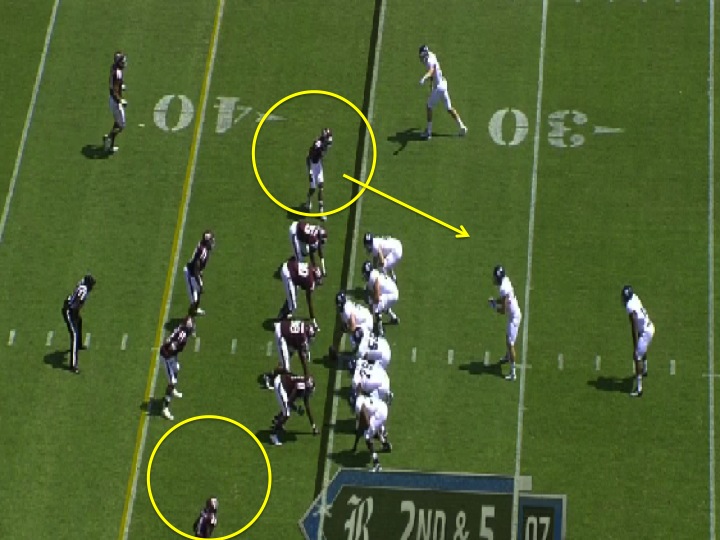 Rice is running a speed option to their strength (the side of the field with the extra offensive lineman). What is a speed option? In a speed option, the offensive line blocks every defender along the line and the quarterback is looking to pitch or keep the ball based on which defenders cover him and the pitch man. This is different from the read option in that a defender along the line is unblocked (usually a defensive end) and the quarterback reads whether the defender is going to cover the running back dive, or stay at home to cover the rushing threat of the quarterback. What is interesting in the way Rice runs the speed option is that they make it look like a zone blocking scheme. Each offensive lineman is trying to block the next guy over (or the guy that is shaded to his left) and also trying to get to the second level to block linebackers who might be scraping to cover either the quarterback or his pitchman. Notice how Rice has left the defensive end and blitzing corner to the top of the field unblocked and are trying to block as many defenders to the left as possible. 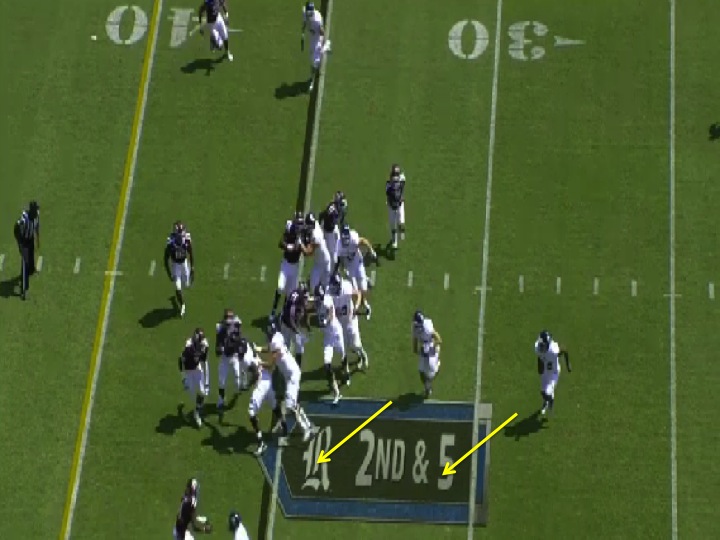 For the Aggies, they are going to have enough defenders to cover both the quarterback and the pitch man, so this play should be stopped for a minimal gain. Hurd Jr. has elected to cover the pitch man. This will mean the quarterback has to keep the ball. By doing this, Hurd also keeps the quarterback from scrambling outside and forces him back into the middle of the field, back to all the linebackers and lineman who should be ready to make the stop. Newcomer Tommy Sanders is going to be in the best position to make a tackle on the quarterback (highlighted). 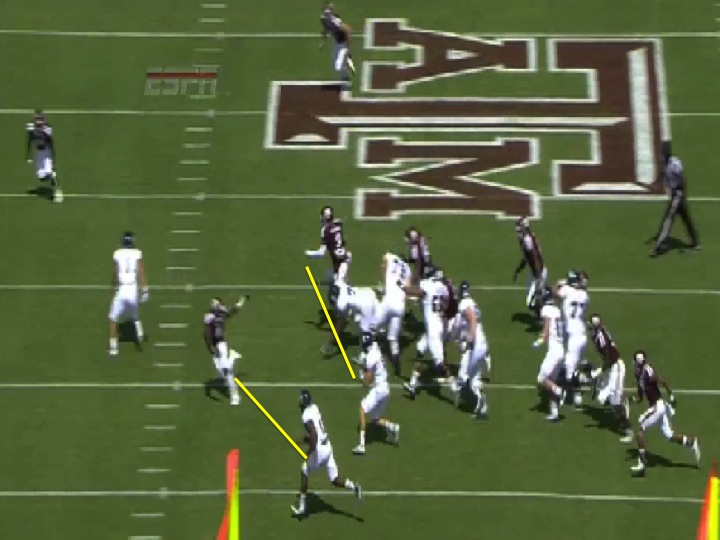 This is where things go wrong for Mark Snyder's defense. After Hurd Jr. has the pitch man covered, Sanders has a clean look at the quarterback. To be honest, I'm not sure whether Sanders realized his responsibility, his assignment, WAS the quarterback. Watching this live, I believed Sanders thought he was assigned the pitch man. After re-watching this play a couple of times, I'm beginning to think Sanders just overplayed McHargue, but it is hard to tell. Sanders might have been trying to get McHargue to string this play out horizontally and force him to the sideline, but it was bad technique. Either way, Sanders is committing more to the running back and not to the quarterback and his assignment. 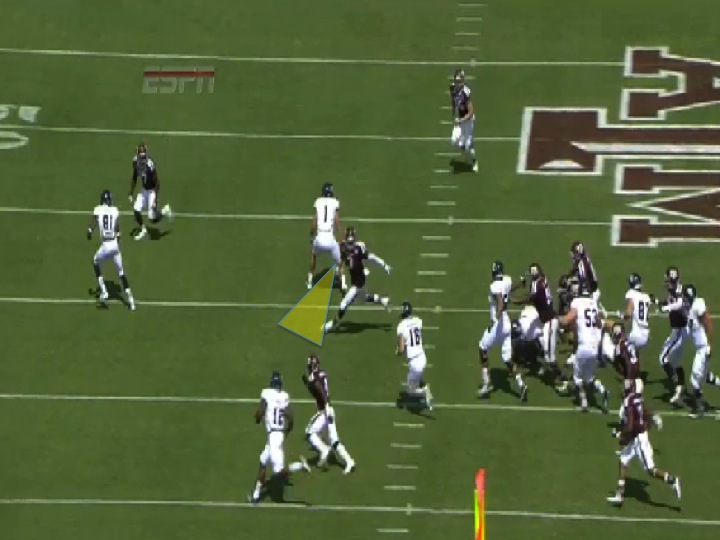 McHargue sees this, and is going to cut back into the middle of the field. There, nobody is left to make a play on him. Sanders is out in no-mans-land and is out of position to make a play. 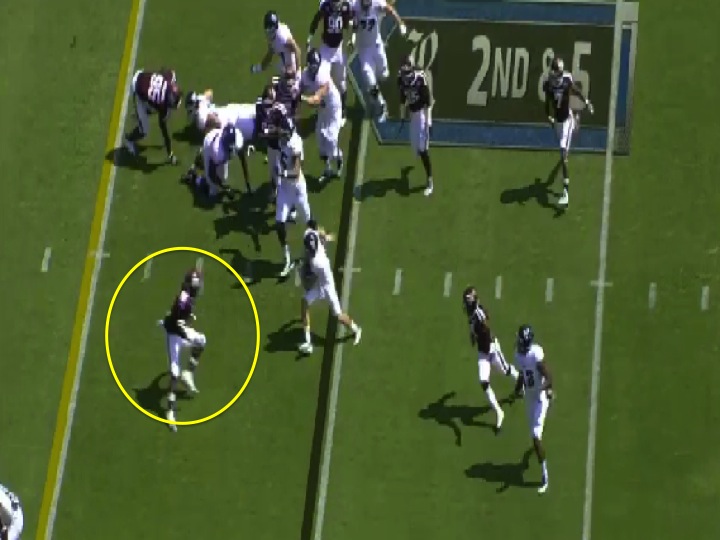 With Sanders out of position, McHargue has an easy path to picking up 57 yards. Credit Sanders though, he did come back to make a touchdown saving tackle, not giving up on the play. 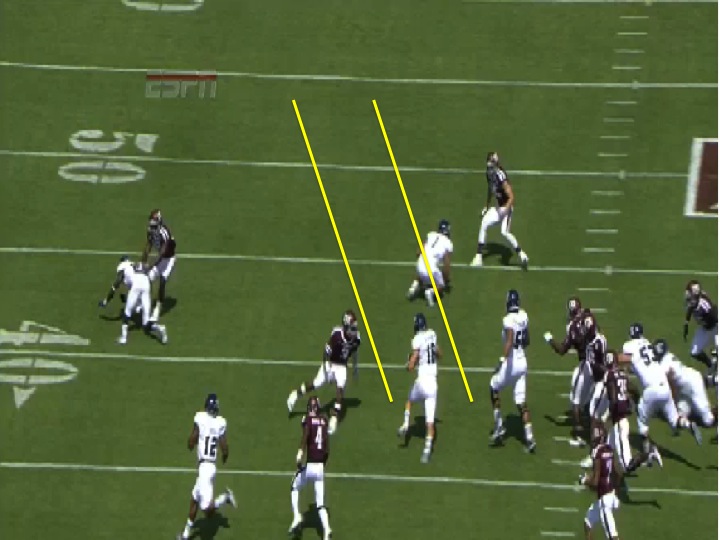 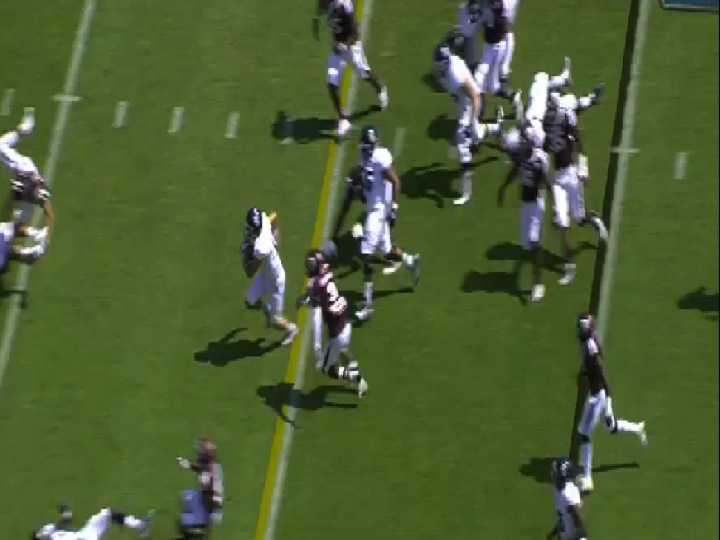 Now let's look at another missed assignment that resulted in Rice's second touchdown. On first look, A&M has three down linemen as Rice comes out in a spread formation. To the bottom of the field, Howard Matthews is set to cover the inside receiver with Nate Askew coming on a blitz. 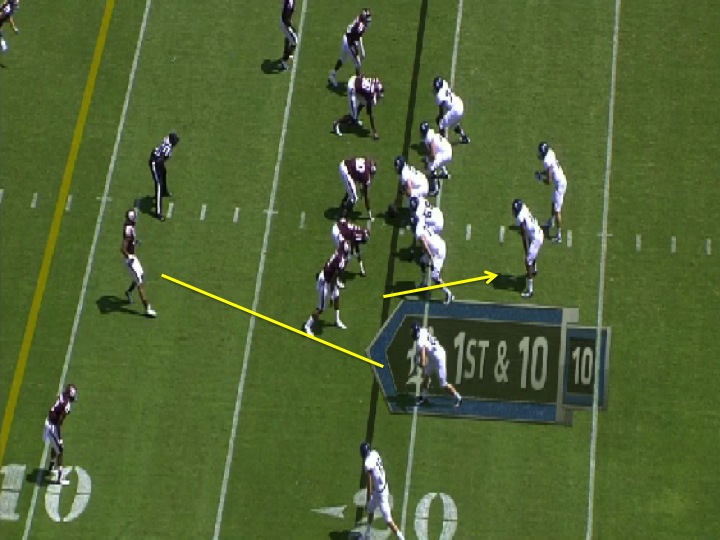 The Aggies are going to change their look once again before the snap. Now Howard Matthews is no longer covering that inside receiver. Nate Askew is going to be asked to cover him one-on-one. Wait, what? Instead, the pressure is going to come from the top of the formation. Once again, A&M is going to bring pressure and Rice will run a play to the opposite side. This happened quite a bit on Saturday. Did Rice get extremely lucky or is it something more? Hard to say, but I guess it isn't hard to figure out that if A&M is going to show pressure from one side, they will probably bring it from the other. 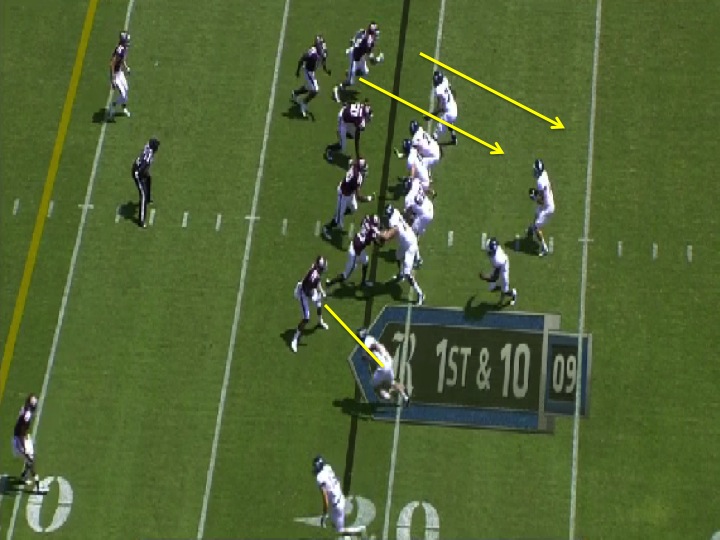 Because Nate Askew was asked to cover the slot receiver, there is nobody left to cover the flats against running back Charlie Ross. This is where McHargue goes immediately after the snap. 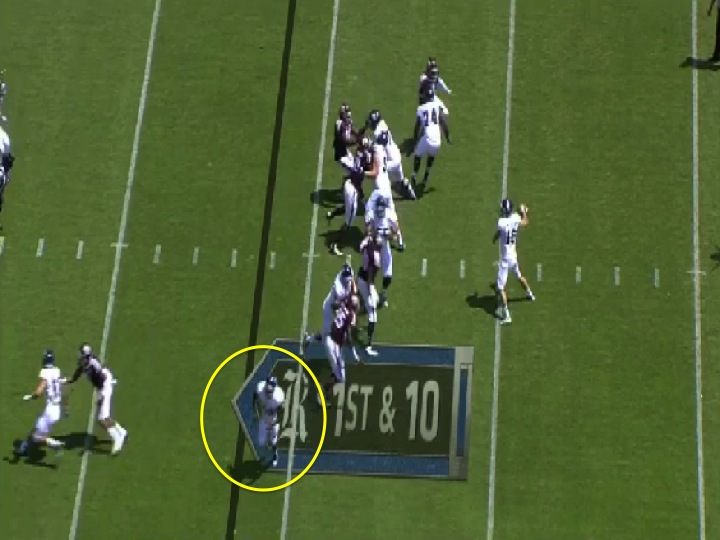 Nobody had Ross covered, and he has all the room in the world to make an easy catch and run with two defenders covered by receivers and Howard Matthews playing deep coverage near the goal line. A few poor tackling attempts later, Ross is in the endzone. 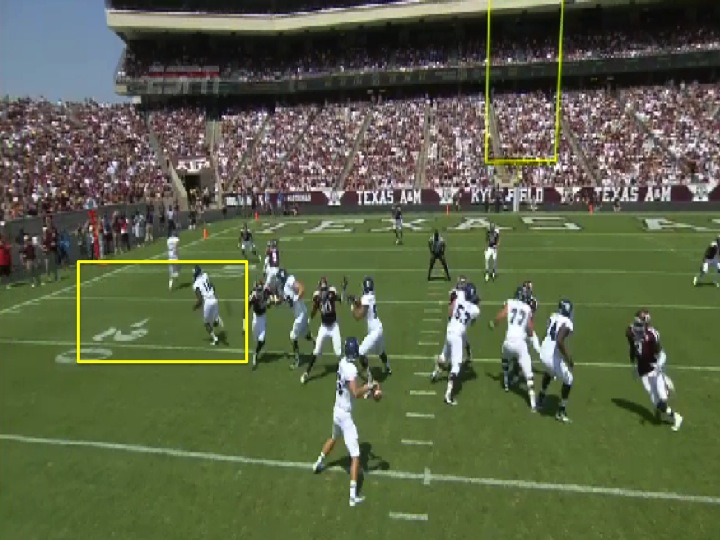 The A&M defense was plagued on Saturday by poor tackling, poor assignments, and just unlucky play calls (or did Rice figure out Mark Snyder's play calls?). They did get better as the game went on, at least when it comes to assignments, and a lot of young players showed promise. From just watching one game, I think the best move for this defense will be to start Julien Obioha, Isaiah Golden, Kirby Ennis and Daeshon Hall along the defensive line, and some combination of Steven Jenkins, Darian Claiborne, and Jordan Mastrogiovanni at linebacker with Shaan Washington coming off the bench in passing situations. At least to this point, most others didn't play up to their potential along the defensive front seven.

Texas A&M gets another chance to correct their assignments against Sam Houston State. They will be running those option looks all day long on Saturday.