Analyzing how the SMU Mustangs stack up against Texas A&M’s Fightin’ Texas Aggies in this week's Stat Simulation...

OKAY, OKAY, OKAY... who the F- at the web1.ncaa.org website decided to shut off the statistics machine and relocate to a 2002 version of online database sharing that is frustrating to utilize, difficult to navigate, is missing games and stats, and simply sucks?

Well the NCAA forced me to go to CFBStats.com and completely rewrite and automate my spreadsheet so now I get 80% of this thing filled out at the push of a button and I can now match up any two teams I want for a quick stat-comparison - speaking of which see the poll below. Anyways, THANKS ALOT NCAA, FOR MAKING ME DO NECESSARY WORK UPDATING MY CRAP.

Hey, have you guys ever seen the work they've done over at StatMilk? You can compare any two teams in the nations and match up like-for-like statistics, but you can't take the offense vs defense head-to-head like I do here... It's very interesting stuff though with automated INFOGRAPHICS! 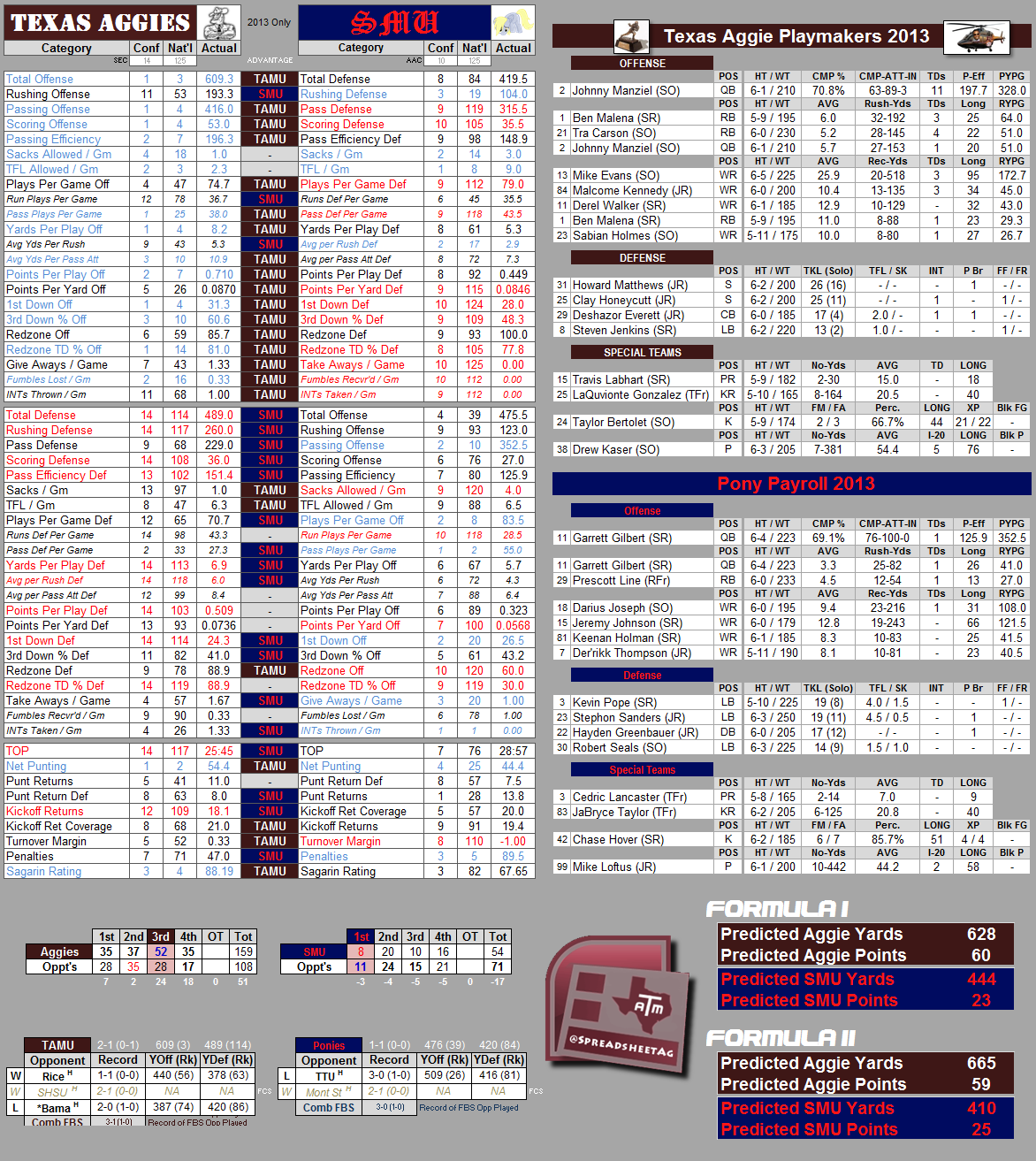 2. You probably know this, but Mike Evans had 7 catches for 279 yards, and a TD last weekend (against Alabama!). He is currently 2nd in the nation in yards/game behind Colorado's Paul Richardson (2 games played, no Alabamas played). His 20 catches for 518 total receiving yards puts him at 3rd overall in yards per catch, though he has double the receptions of both of the guys ahead of him (undiluted stats above him).

5. SMU allows nearly 50% of all third downs to be converted against them. The Aggies convert over 60% of the time.

6. Garrett Gilbert is the teams rushing leader in attempts (let that sink in) at 12.5 per game. Prescott Line has 6 per game, and there is a guy on the SMU squad named Traylon Shead... does that sound familiar? He signed with texas in 2011, went to Navarro JC, and is now playing for the Mustangs.

7. There is only one other program in the great state of Texas with a worse total defense than the Aggies - t.u. - but I doubt we do something silly like fire our coordinator in mid-season.

Since 2009, the Aggies (with the help of the 12th ManTM) have forced or benefitted from 7.3 or more penalties per game by their opponent at Kyle Field. They are currently in 4th place for opponent penalties forced at the home team's house.

The Arkansas Razorbacks (3-0) are BACK baby. Well, maybe not yet. While they've taken care of business against lesser opponents in ULaLa, Samford, and Southern Miss, they did allow Samford to score 21 points. And their offense hasn't exactly been blistering opponents. They DO average 5.5 yards per carry which should cause any Aggie defenders reading this to shudder.

I hope you enjoy this feature and will come back next week to see how the Aggies will fare, statistically, against the Arkansas Razorbacks in Game 5.