Good Bull GameDay and the Turning of the Tide

A lot can change in 5 years. Let's look where we've been and where we are today.

Share All sharing options for: Good Bull GameDay and the Turning of the Tide

With winds gusting through the Zone Plaza, we did our best to try to keep our tent from collapsing on us while managing to get some semblance of sleep. It was just before midnight one Sunday in the fall of 2008 and my then girlfriend and I were alongside a handful of other Aggies occupying the hard grounds outside Kyle Field for tickets. We weren't nationally ranked. There were no College GameDay plans. No rumors of rappers or celebrities coming to the game. Despite beating Texas 38-30 in Coach Fran's last game, we dropped our season opener to Arkansas State in what would be a foreshadowing of sorts for Mike Sherman's tenure. Student morale was so low by mid-season he took to The Batt to implore students not to give up on their team. Our games were hardly ever televised and if they were it usually was because of our opponent. Season tickets hadn't sold out and there were no plans to show games over pay-per-view until they were. The word "Heisman" was only used in reference to John David Crow unless talking about other teams. If you read message boards, you'd read posts wondering if we'd ever win a national championship in our lifetimes. There was no referring to our defense as the Wrecking Crew. A good turn out at Midnight Yell was filling most of the 1st and 2nd East decks at Kyle... 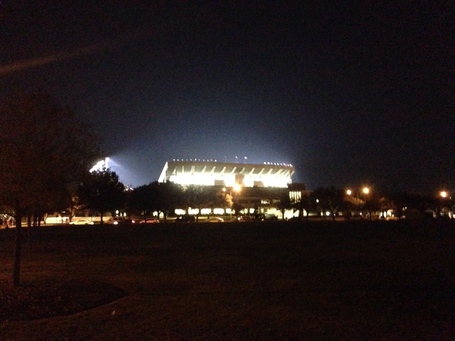 As we walk through the campus, we notice the stages and infrastructure ready for what was coming. In 8 hours the grounds would be filled with people carrying PVC pipes, wooden stakes, broom sticks, or whatever they could find to affix their signs to with disturbingly funny, impressive, necessary, factual or medically inadvisable messages with the hopes of seeing them on television. It's now twenty 'til midnight before Yell Practice for this years' "game of the century". cuppy cup, SpreadsheetAg and I arrive from Northgate thinking we've made it just in time. 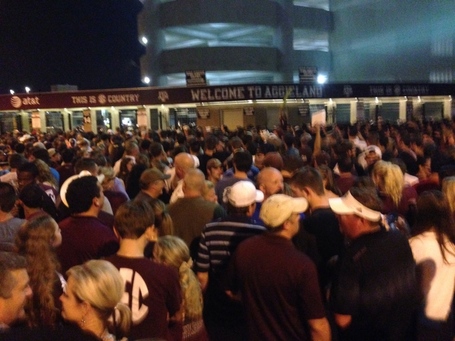 Before we know it we're stuck outside the gates like we're front stage at a concert. There's no way we're getting in before midnight. One adventurous person attempts to climb over one of the closed entrances with the crowd cheering him on, but he doesn't make it. Just as we get through the gates, we turn back to see that someone has managed to climb atop the roof of the gate complex. I want to stay to see how it ends but Yell Night at Aggieville Midnight Yell has already started. ESPN is there broadcasting attempting to broadcast it, but Carl was having a rough night. As we walk out to the lower concourse of the Zone, we see all three decks of the East side filled as if the game were about to start. It's truly an amazing sight. 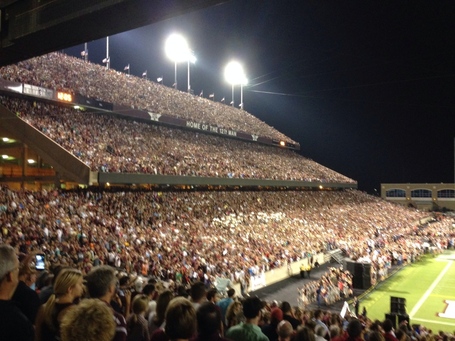 Driving toward the campus, the lights of Kyle Field brighten the overcast sky. It's a little before 7am and it's eerily calm. I'm able to drive down George Bush and Wellborn with ease, but I know it won't last. I decide to park in the West Campus garage since it's familiar to me. Less than two hours later it would be full. Carrying two 10ft segments of 3/4" PVC with the familiar "WELCOME TO THE HATE BARN" banner, I head toward Simpson Drill Field. The original plan was for SpreadsheetAg and I to meet at one of the 55 trees surrounding the field - the tree with the number 1 carved into it that we passed walking to Midnight Yell. Plans changed a bit when we found that SpreadsheetAg was a bit under the weather after the night before. 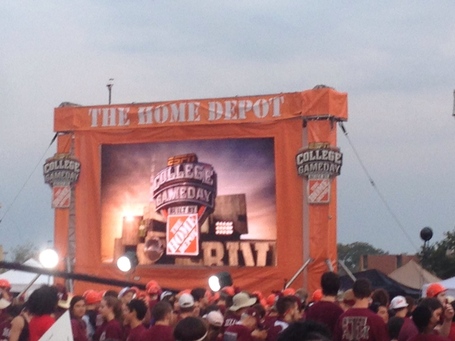 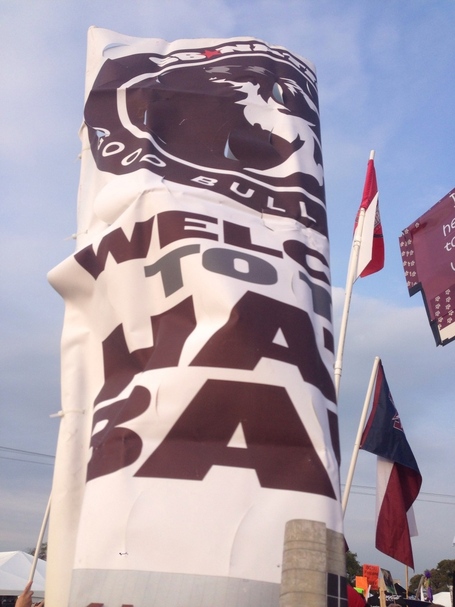 When I arrived at Simpson Drill Field, I was surprised at how laid back things were. I had envisioned ESPN lackeys individually checking each sign and letting no one within camera range in without verification. Not so. The only restrictions were for the standing room area toward the front (or back, depending on perspective) of the stage. Bags were prohibited, signs on "sticks" weren't allowed in, and I would assume that containers weren't either. I learned firsthand about the sign rule as I naively attempted walking into the area with twenty feet of plumbing under my arm. To the left and right of the stage were two giant screens that allowed you to see the show, as well as work out a strategy to get your banner on camera. Since I had no idea what to expect, I walked to whatever open space I could find. Soon after the Yell Leaders led yells to get everyone's blood pumping. Then the GameDay crew started trickling out one by one to everyone's excitement. Before I knew it, the ESPN directors announced that the show was starting in 30 seconds.

I had practiced holding up the banner and thought I was going to be fine, but failed to realize that no one else was holding theirs up with me at the time. As soon as the cameras started rolling, everything shot up. It quickly became a literal balancing act of watching one of the two screens to figure how to be seen on camera while physically holding up your sign and trying not to be a prick by blocking anyone else. As hard as that sounds logistically, it actually wasn't as difficult as it sounds. Physically holding something 10 feet over your head is another story, although I'm very glad the wind wasn't blowing like it was last year. I managed to get some good screen time around Chris Fowler for the first 30 minutes I was there.

I started checking Twitter from time to time and was excited to see that people had already seen it and even taken screenshots. Since it's a fairly long show, I decided to experiment and find other angles. I had seen the Clemson big head signs quite a bit on screen during close ups, so I headed that way. As luck would have it, when I did I met Good Bull Hunting reader @bradburst who offered to help hoist the banner. Despite still getting screen time, the cameras must have shifted slightly as we weren't in the closeups like I hoped. We knew that Herbstreit and Corso tended to get close ups quite a bit, so we moved to the other end of the crowd. After getting the shots we wanted, cuppy cup found us and we decide to move onto visiting tailgates to mingle and deliver koozies and decals.

One of the biggest things about social media is that it can be easy to think of the people we interact with as pseudonyms, user names or avatars. Having so much exposure to others in that way gives us that luxury. Tailgating is the perfect real life representation of the best of social media - camaraderie, humor, discussion, competition, all intertwined with booze, barbecue, and football. Today would be no exception. At the end of the drill field were two rows of white topped tents from the Tailgate Guys - one of which where we found Cool Hand Lucas. We compared GameDay sign stories, delivered the goods, grabbed some water, and made our way toward Spence Park. On the way we pass rows upon rows of additional tents. I typically never venture this far north when I attend games so it was crazy to see how vast our tailgating landscape is. Spence Park is another place I don't have much experience with. Walking there you can't help but notice the remains of G. Rollie White and exposed sections of Kyle Field's east side. We joke that it looks like a post-Soviet collapse scene, which is fitting given the architectural comparisons people tend to make. When we arrive, it's shocking to see the density of tents in the area. It's not an exaggeration to say that you almost need GPS coordinates to accurately find tailgates, especially if they are packed toward the middle of the park. Once there, we meet up with DerekAggie06 and begin our road trip across campus.

The irony of the tailgating/social media comparison is that until we reveal who we are digitally, we are just as anonymous in person as we are online. As far as people know we're just three strangers walking around pretending to be bloggers. It was fun to see the reactions of people saying "oh you're..." or "you wrote that article..." One tailgate we visited didn't know who we were. After shouting "Good Bull Hunting?" with a confused hesitation in his voice, his friend that wanted us to stop by rushed over to talk to us, nearly tripping over things along the way. From Spence we ventured toward West Campus and along the way met former Yell Leader and FanPoster Fletcher Massie. Dressed in the hipster game day apparel he wrote about, we talk a bit and share some laughs about some of the antics of @BarbieYell and how popular he has become. 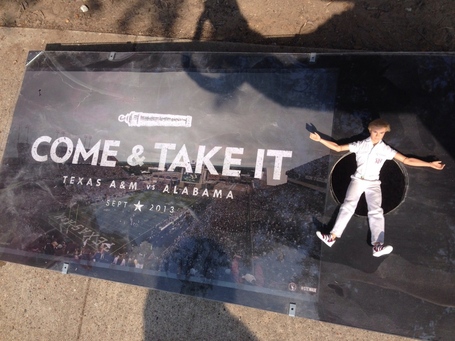 Like a tailgate treasure map, we chart our course step by step. Go to this part of campus, cross this street, look for this landmark. We're introduced to things like pudding shots and drinking games called Thunderstruck (where participants rotate drinking when the song says the word "thunder"). We play beer pong against Barbie Yell despite the ball being larger than his head. We admire cornhole boards with replaceable artwork - many times featuring work from THE TAILGATE. We encounter one eccentric Alabama fan that DerekAggie06 interviews and manage to get an authentic, emphatic ROLL TIDE ROLL. We watch as eight people down their allotment of alcohol from an octobong. We walk through aromatic clouds as we pass smoking pits of BBQ. In the short time we spend walking the campus, it's like we're visiting different cities across Texas - all have their own mannerisms and heritage but all share the same common bonds. 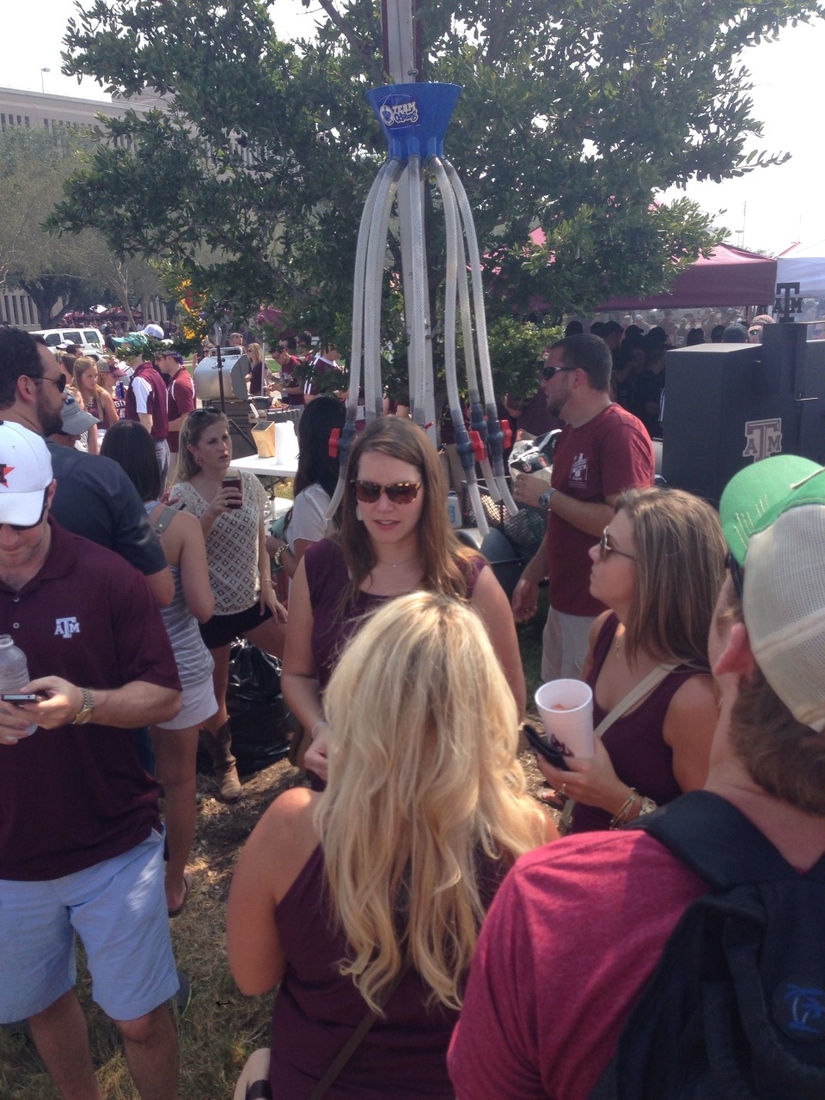 Most of you have seen the game by now and know how it ends. We have plenty of great articles for you to check out regarding the game. But my parting thought is that the tides have turned, obviously not in a victory over Alabama but rather in a victory over accepting mediocrity. We had the leadership to take us out of the crumbling oligarchy that was the Big 12 of 2011 and lead us to the promised land of the SEC. Where national powerhouses and rebounding programs are treated as equals. Where every conference game is televised and soon all games will be. We have a coach who doesn't just say he wants to win championships, he shows it. He believes not only that we can, but that we will. A coach who is willing to spend the Friday night before a big game taking a helicopter to visit recruits. We have students who will wait longer than I ever did for tickets and are legitimately excited to stand as the 12th Man. We learned that social media and brand awareness matter by creating sites like Aggie Football Lifestyle and embracing Twitter, Instagram, Vine and other platforms. We made changes where change was needed: updating uniforms, modifying entrances, and perhaps most importantly our prized venue - Kyle Field.

We've made great strides in overcoming mediocrity, but we aren't done yet. We can't make excuses or become complacent. We need to develop our talent. We need to continue to recruit. We need our defense to be as good as our offense. And our offense needs to be even better. We need to get to a BCS bowl and we need to win it. We need to conquer our division, our conference, our playoff match ups, and win that crystal football. Consistently.

We're not there yet, but we're a hell of a lot closer than we used to be.