"The System" Details the Recruitment of Ricky Seals-Jones

We were able to get a copy of The System: The Glory and Scandal of Big-Time College Football a day early.

Share All sharing options for: "The System" Details the Recruitment of Ricky Seals-Jones 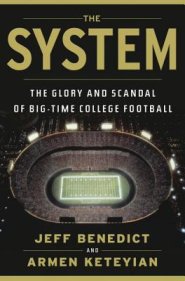 by Jeff Benedict and Armen Keteyian

Armen Keteyian and Jeff Benedict spent the better part of two years researching this book. And ever since Dan Wetzel's story about it came out the week before the season started, it's been at the top of virtually every serious fan's wishlist. The authors went behind the scenes at dozens of programs all over the country, from Michigan to Towson. They snag you in the first chapter with tales of a long-haired, rebellious Mike Leach wooing his wife over root beer and hot dogs at BYU in the early '80s, winning her over with his confidence and ambition, and you are suddenly committed.

The book has 27 chapters, each basically its very own stand-alone story that has a unique place in the narrative. It runs 416 pages (including the index) so obviously I have not read the entire thing. There is a chapter dedicated to the recruitment of Ricky Seals-Jones, so I made a beeline for that.

The System's chapter on Ricky seemingly paints a picture of a typical high school football megastar: piles of recruitment letters, college coaches texting him at all hours of the night, and playing through injuries because of his ultra-competitive nature. But as the authors begin to flesh out the entire recruitment saga we begin, through several conversations with his father, to see a more complex Ricky Seals-Jones: a grounded individual, dedicated student, and gracious teammate.

Chester Jones is a proud man. He told his son not to return any calls from anyone at Texas. In Chester's mind the Longhorns had gone all in at the wrong time with a bad hand. They were out of the game. The System

The Seals-Jones family is as close-knit as any in rural Texas. Chester is a regular at Tony's Diner. Ricky is named after an uncle he never met; his mother's younger brother who was killed in a car accident when he was still a high school track star. And Sealy's most famous native son, Eric Dickerson, is Ricky's first cousin. His advice was welcomed during the arduous recruitment process:

"They want you. Take your time. Make sure where you want to go." Advice that hit Ricky like a linebacker when he attended the UT football camp in Austin and took stock of some of the Longhorn recruits, worried they weren't up to their four and five-star billing. Within two days he called Texas and told them he was de-committing.

But being a big fish in a town of 6,000 also has its disadvantages. Everyone knows everyone. So when Texas pulled their scholarship offer the second time around and Chester had had enough, the Joneses were still getting hounded through coaching contacts at the high school. Ricky took his official visit to Texas A&M during the final regular season game in 2012 and watched the Aggies demolish Missouri, a team that had long given them fits in the Big 12, by 30 points. After the game, he visited with Johnny Manziel.

"I saw your highlights; I know what you can do," said Manziel. "You're a big target, and when I'm moving, I see you out there, I'm throwing the ball to you."

In keeping with the key elements of The System, there were also hints at impropriety. On a scale we've not seen before.

According to a source with direct knowledge of the conversation, in late June 2012, Chester Jones said "people" representing a perennial top twenty program had approached him with an offer:

"He was trying to process it, to be honest with you," the source said. "He was in conflict. Not about taking the money. Conflict from the standpoint of disbelief over the offer."

Chester would later sit with the authors as they played a digital recording from the source and decline ever receiving an offer directly. He did not want to do anything to jeopardize Ricky's future. Word of the offers continued to spread, and the alleged numbers grew higher, but Chester Jones remained adamant that no direct offers were made.

If he doesn't play another down, I'll be proud of him. -Chester Jones

To an admittedly cynical college football fan, this at first glance seems like another typical CYA response. But looking at the entire picture painted by Keteyian and Benedict tells a more complete story. The Joneses are dedicated parents and Chester is a man of devout faith and determination. The fact that it's likely they really were looking out for the best interests of their son is one of the bright spots in a college football landscape so recently littered with scandal and crooked dealings.

In all probability, most aspects of Ricky Seals-Jones' recruitment were not that much different than those of the top 25-30 blue chip high school athletes across the country in any given year. For every rumor of half-million dollar shop-arounds, there is probably another family refusing to act in their immediate interests and choosing to keep their son's future the top priority.

As college football fans, we revel in the breaths of fresh air that show up unexpectedly. We need these bits of humanity to get us through the endless clamor surrounding player discipline, improprieties, coaching scandals, booster scandals, player scandals, insolvent athletic departments, autograph signings, and the entire array of unending controversies that make us simultaneously love and hate the sport so much.

"That's good. Like I told you, we're going to be something special. Next year, maybe you and me will be going to New York." -Kevin Sumlin, when RSJ called him in December 2012 to commit (The System)

But sometimes the bright spots are right under our noses. Not every five-star supercommit is some kind of unapproachable and aloof megastar. We often get so inundated with endless recruiting reports, highlights, and other various hype that we forget these guys are basically just kids who love playing football. They just happen to be really good at it.

I learned more about Ricky Seals-Jones from this fourteen page chapter than from all the media coverage associated with his recruitment. It's a reminder that these players are virtually dehumanized and talked about as an assortment of cogs needed for a hungry machine.

Ricky lost his final high school game to his town's arch-rival. They needed to win to make the playoffs. He had been nursing a bum ankle for weeks, so he split time between quarterback and wide receiver, but was not getting the ball thrown to him as much as some people thought he should. When the game ended, he was the first to cross the field to shake hands. When a visitor asked Ricky after the game if he thought his quarterback should have done a better job getting the superstar the ball, his response was probably everything Chester could want out of his son: