Analyzing how the Alabama Crimson Tide stacks up against Texas A&M’s Fightin’ Texas Aggies in this week's Stat Simulation...

My Prediction last year had Texas A&M losing by 2 TDs on the road in Tuscaloosa.  I am very glad it was wrong.  This year, it’s a virtual pick’em like many think it’s going to be – the game of the season of the decade of the … blah blah blah.

Since A&M played 13 games last year and 2 games this year and Alabama played 14 games last year and 1 game this year, this means that both teams have played 15 games since the beginning of the 2012 season. So what I did this week is take both teams' 15-game averages and resorted them based on the 2012 final numbers (because I was not about to add in EVERY team's last 15 games to homogenize the data; it would have taken me until Christmas to do so manually). 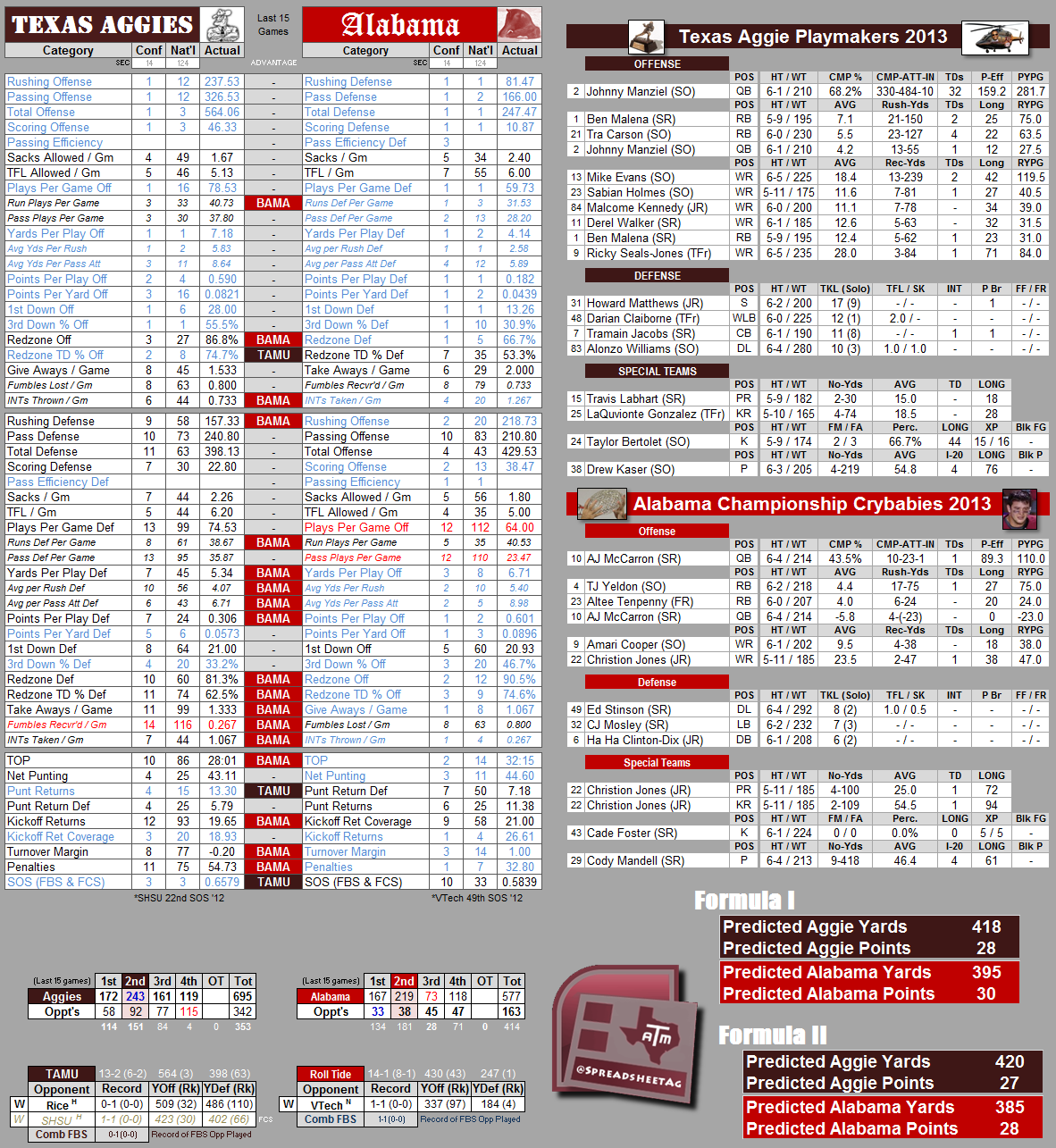 Some notable statistics and questions from the "Stat Simulation" above and each team’s website:

2.  Did you know that we get more starters back on defense?  LB Steven Jenkins, CB De’Vonte Harris, and SDE Gavin Stansbury are all returning to the 2-deep.

3.  Alabama’s Christion Jones is dangerous, scoring 3 All-Purpose TDs in the season opener versus Virginia Tech.  (1 Receiving, 1 PR, 1KR).  If you take out his PR for a TD, his other three PRs averaged 9.3 per return.  His one other KR went for 15 yards.

5.  The Alabama Offense is suspect until proven otherwise.  They were facing a "decent" V-Tech defense, but still fell WAY off of their 2012 numbers. So when you see all that Crimson color above, remember that that was 93% from the 2012 season.

7.  Alabama really only has two offensive TDs to it’s credit.  The other three were from the aforementioned PR, KR, and a Defensive score.

I hope you enjoy this feature and will come back next week to see how the Aggies will fare, statistically, against the SMU Mustangs in Game 4.

Aggies beat Alabama 34-23.  Johnny starts three (3) series in the 3rd quarter and scores 3 touchdowns and doesn’t come back in the game.

The SMU Mustangs are in the American Athletic Conference (AAC) which is NOT to be confused with the ACC.  One time t.u. starting QB Garrett Gilbert is in his senior year there, and is looking to bounce back after losing to Texas Tech in the opener (41-23) and barely nudging Montana State (31-30).  Their average season attendance so far is 22,450.  Like Alabama, they will have 2 weeks to prepare for the Aggies.