If you're one of the hundreds of thousands of people descending upon Aggieland this weekend, here's what you need to know!

IT'S FINALLY HERE. The date we've all had circled on our calendars since the schedule came out is a mere 24 hours away. If you're looking for suggestions on what to do this weekend, consider this a strong starting point. LEGGO!

Y'all should already know all about the Bammers by now - between The Tailgate, Ranger's usual fantastic work on actual football breaks down potential Alabama weaknesses to exploit, and this fun little Q&A with the SB Nation guys over at Roll Bama Roll - featuring 365 comments and counting!

Ah, yes, the price of primetime games on national TV.. It's gon' be hot. BUT IT'S BAMA SO SUCK IT UP AND DEAL.

How to watch (if you can't make it to Kyle):

OK, so last week I foolishly ignored a 20% chance of rain and so, naturally, it rained. I don't want rain messing around with our offense this week, so I'm going to superstitiously predict torrential downpours all day long. The high is only 94 (ONLY, I know), but you'll want to at least attempt to hydrate while you tailgate so you can BRING THE HATE.

Restaurant of the Week: Antonio's Pizza 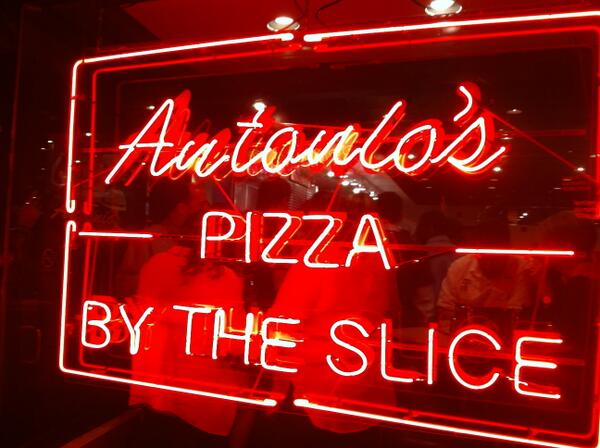 This was a tough choice this week because there are so many options to suggest for all of the first-time visitors sure to be making the trek to College Station. You can't go wrong with so many options - the Dixie Chicken, Chicken Oil, FUEGO, Koppe Bridge, Hullabaloo, etc. etc. And yet, I landed on Antonio's Pizza on Northgate.

If you're visiting College Station for the first time and you don't at least go to Northgate in some way, shape, form or fashion, YOU'RE DOING IT WRONG! I expect the Gates to be absolutely out of control this weekend, and I intend to soak in as much of it as possible. I already told our newest GBH contributor lynnemarie12 I'd buy a round of shots at Sake Bar, so join us and I'll buy you one too. Anyway, back to the point (it's hard to focus today).. Once you complete your shenanigans at Northgate, you'll want to walk over and grab a slice (or three) from Antonio's. You really can't go wrong with any of the choices, but my personal favorite tends to be the Chicken, Bacon, Ranch - mainly because I'm a sucker for bacon and ranch.

Should you choose to ignore my advice and not partake in Northgate activities, Antonio's is open during the day.. I think. Couldn't really tell ya for sure. But check it out! It's delicious. 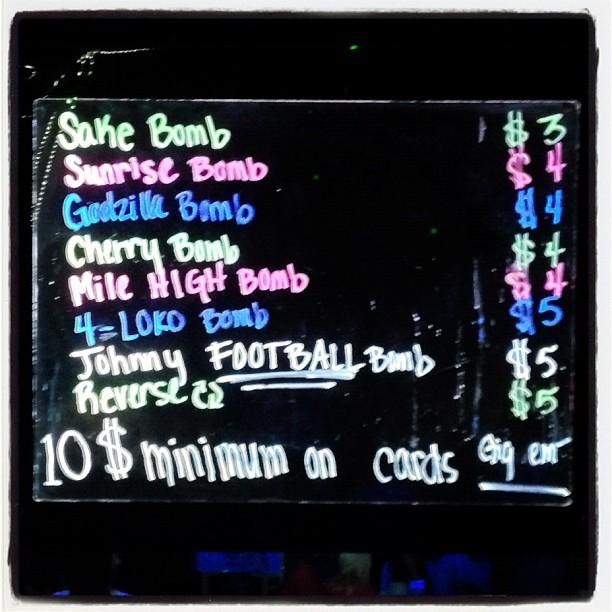 Bar of the Week - Sake Bar

As previously mentioned, I'll be buying a round of shots at Sake Bar sometime tonight so if you want to partake in that, make sure you're following me on Twitter. I'll be sure to tweet when I'm headed that way.

Japanese restaurant by day, shot bar by night, Sake is a perfect way to either get your night started or take your buzz to the next level. My personal shot of choice is apparently the same as Lynne's (I can't decide how I should feel about this) - the Sunrise Bomb. You really can't go wrong here for the most part, though, and at just a few bucks per shot you're getting some serious bang for your buck. If you're feeling adventurous, give the Johnny Football Bomb a shot. Get it? Shot? Pun? Moving on... 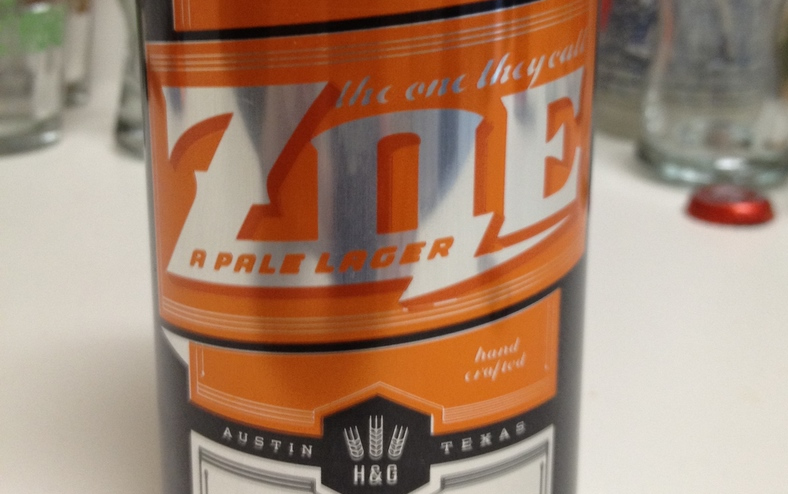 Although I'm not 100% positive how readily available this beer is around Bryan/College Station these days, I decided to roll with it because it's an excellent beer. I have seen it at Spec's on Texas Ave a couple of times, but it usually doesn't last long. If you can get your hands on some of it, I strongly suggest giving it a shot for your tailgate. It comes in cans - always a plus - and it's an excellent, crisp pale lager that really tastes more like a pale ale. Hops & Grain is doing some awesome stuff over in Austin, so check them out anytime you're over that way. If you can't find any of this beer and want to try it, find me tomorrow - I'll have a couple of six packs of it! 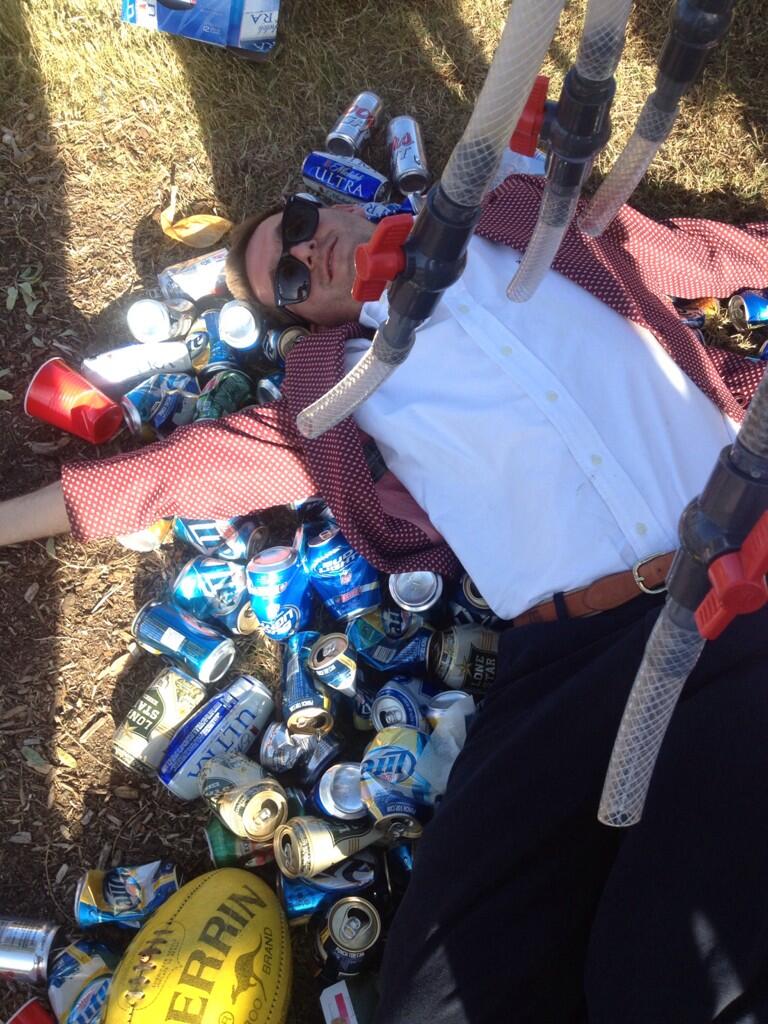 As I said last week, I intend to feature a new tailgate here every week. I got preoccupied at my own last week, so wasn't able to check out the ones I'd hoped to, but I'll definitely do that over the coming weeks. Thanks to everyone who sent me info about your tailgates - keep it coming.

This week's featured tailgate is the Wrecked Crew. You can find them on West Campus in the southwest corner of Kimbrough and Olsen, in the Reed Arena parking lot and stretching out to Olsen St. Let's be honest here - any tailgate that features an Octobong is automatically awesome. If chugging crappy beer as quickly as possible isn't your jam, they also feature a Frankenrita machine which makes 5 gallons of margaritas in just 6 (SIX!!) minutes with a garbage disposal. Still not sold?! FINE. Fireball shots and passing a handle of Makers Mark are also supposedly common occurrences at the Wrecked Crew tailgate. I'm going to be making an appearance late Saturday morning to check it all out, and I strongly suggest y'all do the same. BRING YOUR PARTY PANTS.