It's getting closer. We are around 48 hours away from kickoff of the biggest game in Kyle Field's history. As the #1 ranked Crimson Tide make their way to College Station, is their any type of gameplan we can use to stop Nick Saban and his team? Let's take a look.

"I think this is the best team we've ever played" -- Virginia Tech head coach Frank Beamer before Alabama's 35-10 victory over the Hokies in Atlanta.

That's pretty high praise from a well-respected head coach who has been around college football for a long time. However, Alabama didn't look like one of the best teams ever to trot out on a college football field in their season opening win. Are there weaknesses in the Alabama armor for the Texas A&M coaching staff to exploit on Saturday? The answer is yes. Let me show you.

Let's start off with the Alabama offense. As a group, they only scored 14 points in their season opening win. The offensive line, which features three linemen (LG A. Kouandjio, C Kelly, and RT Shepherd) who will be making only their second starts for the Crimson Tide, was criticized for their poor play. They struggled against the various run blitzes Virginia Tech defensive coordinator Bud Foster called.

Here on this third and one play, Alabama will come out in an I-formation with two tight ends lined up to either side and a split end out wide. Virginia Tech will align in a 4-3 under defense with their safety walked up towards the line of scrimmage. Alabama plans on just powering this one in for a first down with T.J. Yeldon, but Virginia Tech has other ideas. 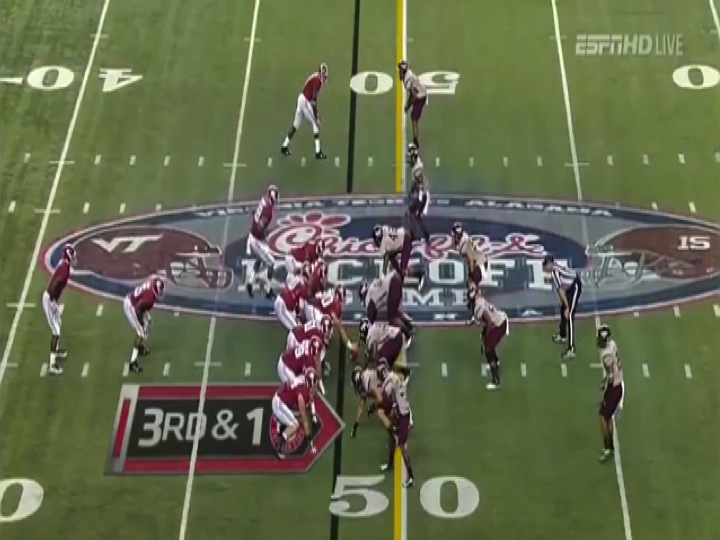 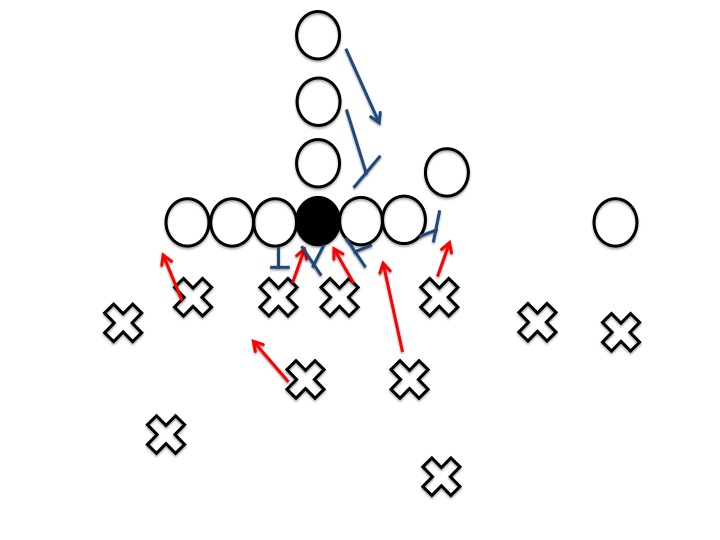 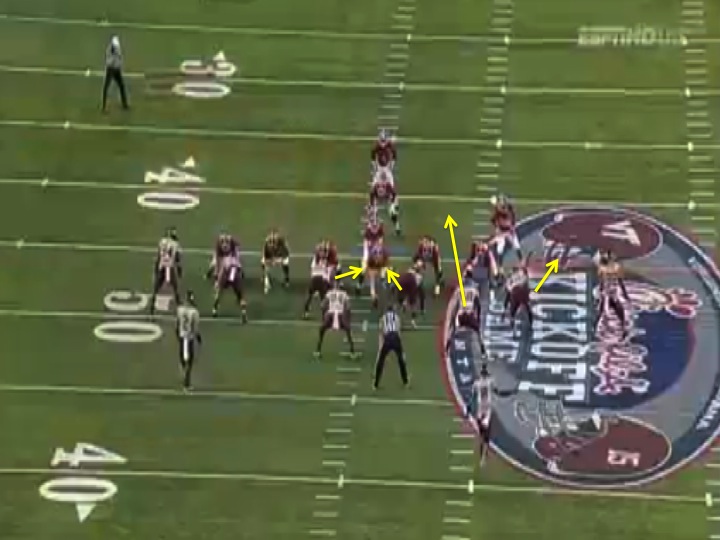 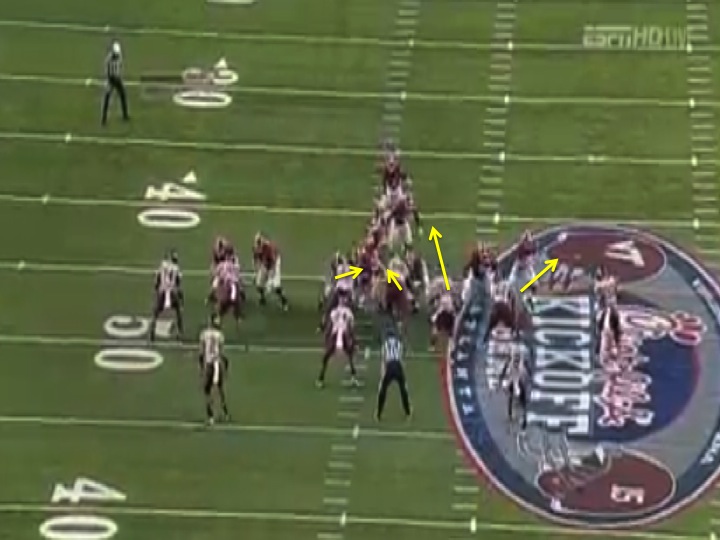 These type of designed run blitzes really thwarted Alabama all night long, and are something Mark Snyder will surely attempt to replicate on Saturday afternoon. Alabama really failed to adjust to them, and the offensive line made no attempts to switch off blocks and/or responsibilities. This is, however, something Alabama can surely improve upon in game 2. There's no question though that their inexperience is an area of weakness for them.

A big question for Texas A&M is do we have any linebackers who we can send on the same type of blitzes and be effective? So far, some of our linebackers have been tentative and are not playing all-out football. We need guys who we can send into the heart of the Alabama line with reckless abandon. Do we have those players? I know we can count on Steven Jenkins, but is there anyone else? Young players will have to step up.

Back to the play, with this blitz the fullback is going to be in great position to pick him up. However I want you to watch what Jack Tyler does—he stays low the entire play. This will cause the fullback to miss his block and allow Tyler to bring T.J. Yeldon down easily. 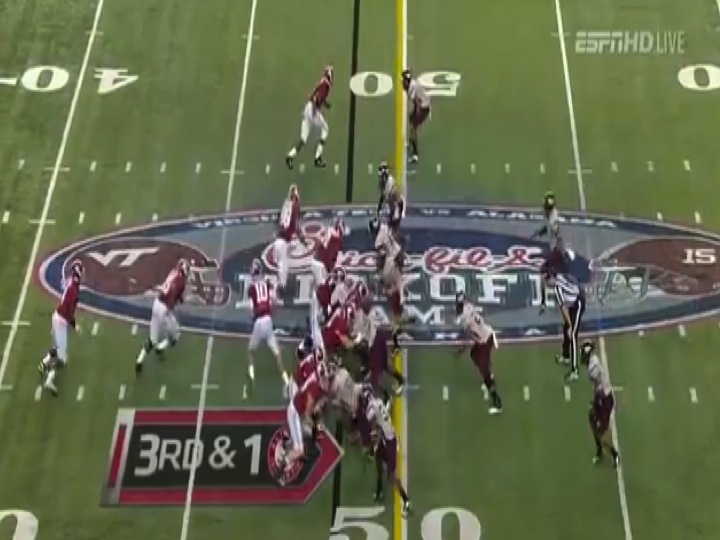 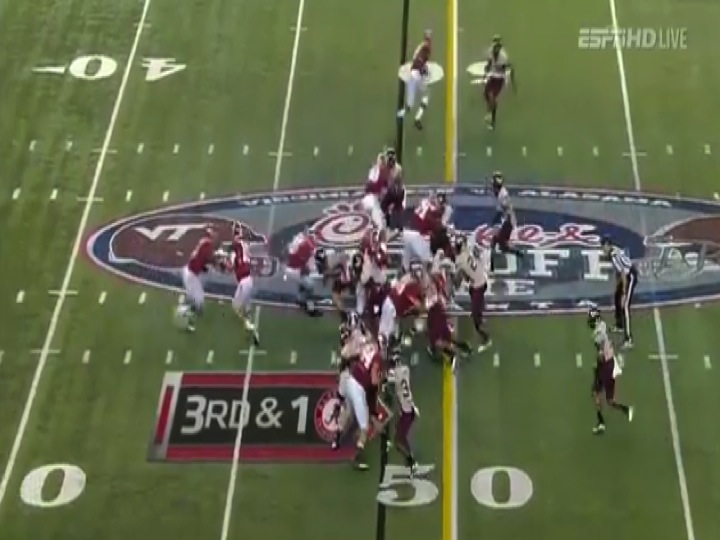 I hope our linebackers have been watching film of the Virginia Tech group, because they were coached exceptionally well entering this game. As I re-watched this game, all of their defenders attacked the Alabama running backs low, wrapping up their legs. If they didn't bring them down, they at least caused them to stumble and pick up only 2 or 3 yards more. This is the kind of technique our linebackers HAVE to play with on Saturday. We cannot see the same type of arm tackle attempts we witnessed against Rice and Sam Houston State. The first defender who tries to arm tackle one of the Alabama running backs should be yanked from the game. I believe the biggest stat to follow in this game will be yards after 1st contact (YAC) for the Alabama running backs. Keep it around 1, 2, or 3 per carry and the Aggie defense has played well enough to win the game. Any higher than that and our defense will be in big trouble. 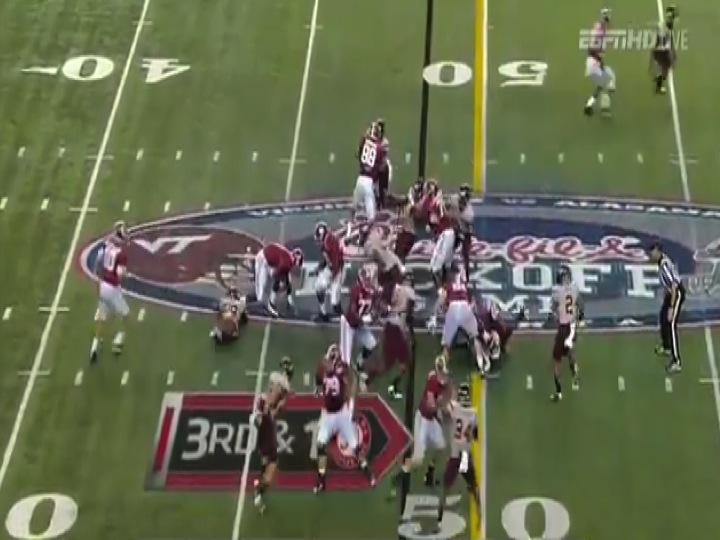 Now let's focus a little bit on the Alabama defense. This is a good group. When you re-watch the Virginia Tech game, you notice that Alabama was not afraid to play with 10 defenders close to the line of scrimmage on any down. Just look how many defenders they bring in around the ball. 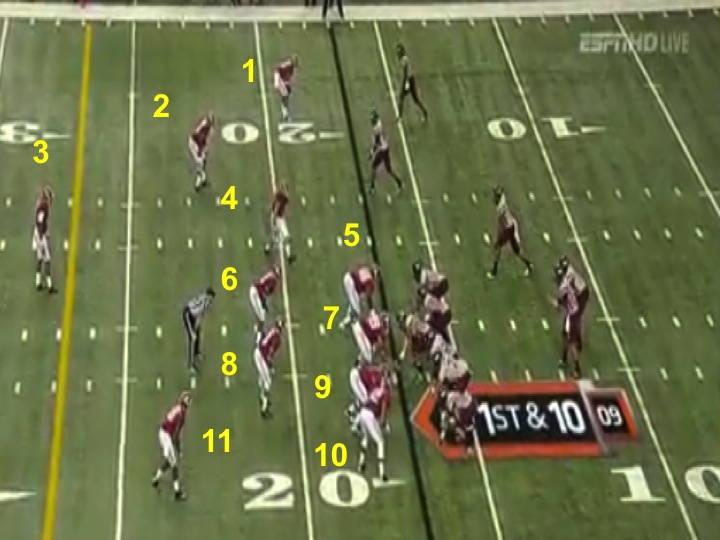 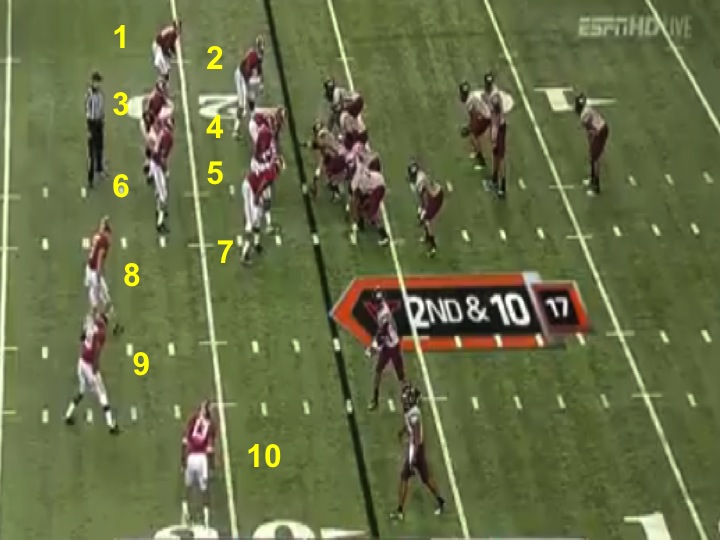 Will Alabama be comfortable enough on Saturday to align similarly against A&M? I don't know, but if I'm Kirby Smart I certainly would take my chances early. Make Johnny Manziel try to beat you deep from the very start, and limit the running game and short horizontal or packaged passing routes as much as you can to put the Aggies in 3rd and long situations. That would be my gameplan going into the game if I were an Alabama coach. If we get burned, then we get burned.

One player I really liked watching was defensive end #49 Ed Stinson. He plays at the end of the line but was really quick in space as well, cutting down some of Virginia Tech's swing passes in the flats. However, he and the rest of the Alabama defense can be beat. Just take a look.

Last week we examined some of Sam Houston State's option plays, and Virginia Tech will run something similar here. Virginia Tech will run a triple option play where the right side of the line blocks down (including the right tackle blocking Ed Stinson), leaving the outside Alabama linebacker to be read by Logan Thomas. Tight end #33 for Virginia Tech Darius Redman will run something similar to an arc block where he will take on the first Alabama player who flashes behind the outside linebacker being read. In the case here, it will be the middle linebacker. 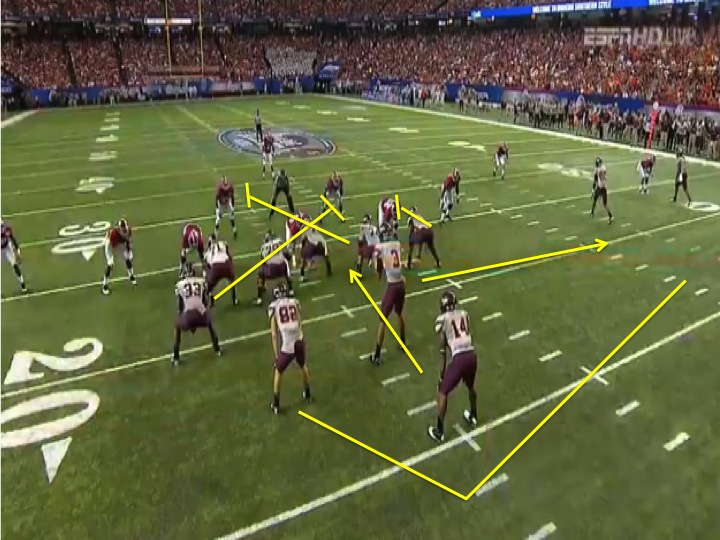 Watch as the entire Virginia Tech offensive line pushes the Alabama front seven to the other side of the field and Redman executes his block creating a clear running lane for the running back who will be receiving the ball on the dive. 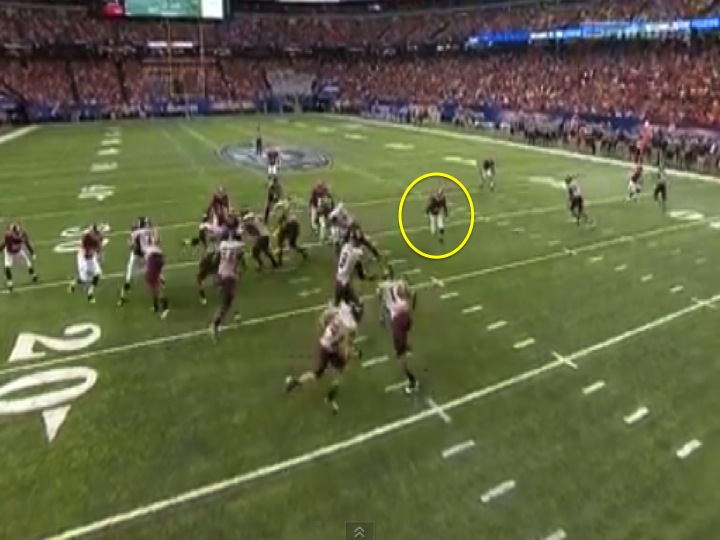 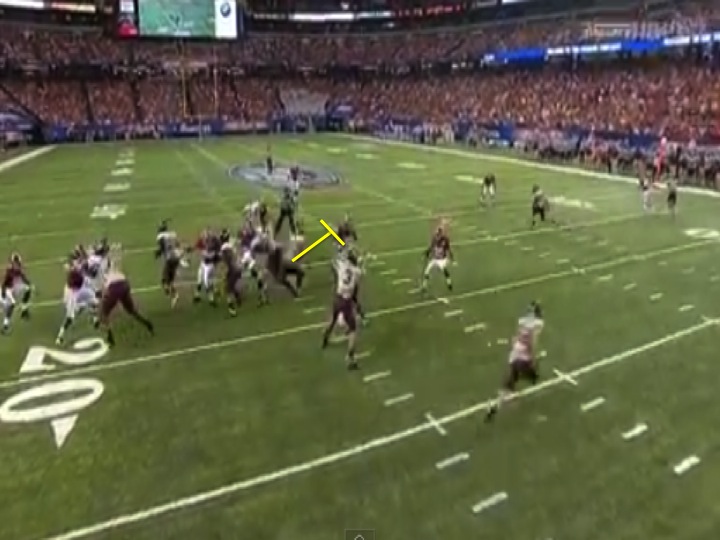 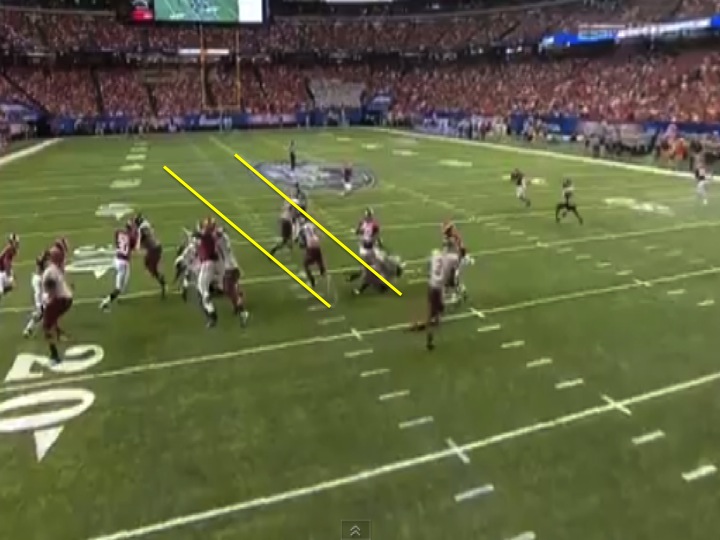 This play would score Virginia Tech's only touchdown of the game.

I think we could see our offense try to employ these similar types of lead blocks, especially with our two tight ends Nehemiah Hicks and Cameron Clear. Our offense has always liked to cross the tight end to try to create cut-back lanes for our running backs, but don't be surprised if we evolve to make them more of a lead blocker-type on Saturday. And, this play also proves the point that our exceptional offensive line has the potential to really push around Alabama's front seven.