Share All sharing options for: Nick Saban: He Mad

Today, the sports journalist equivalent of Dick Tracy came out of his secret lab to lob some nukes at a few SEC programs. Charles Robinson from Yahoo! Sports released a story about some confirmed texts and wire transfers to players from Alabama, Mississippi State, and yadda yadda some other teams. DJ Fluker of Roll Tide fame is named in the story, so you had to imagine questions were going to come up about it in Nick Saban's press conference today. Likewise, Nick Saban had to know questions were going to come up about it in his press conference today. Naturally we should all assume ol' Sabes handled himself with dignity and class.

His final offer: "If you want to talk about the Texas A&M game, I'll be glad to talk about it." When no one bit, Saban muttered "Appreciate your interest in the game" and walked off. - Deadspin.com 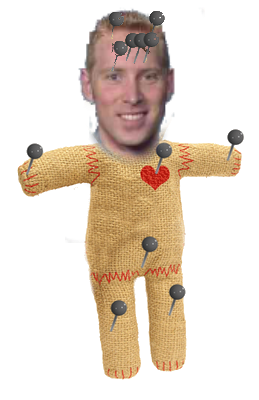 It may be a sleepless night for the Yahoo! Sports sleuth.

Oh, well then. I get it that he can't talk about the situation and investigation because TRUST ME, been there, done that. What a cute little temper tantrum though. You want to make it seem like something isn't a distraction, storming off like a three year old that you happen to be the same height as isn't exactly going to send that message across. I can only imagine that some self-deprecating grad assistant was waiting outside the doors to hand Saban his woobie and a list of names associated with the Yahoo! Sports story.

Meanwhile, God bless Coach Kevin Damn Sumlin. That man has had to deal with something no other coach has had to deal with in college football. We all know Sumlin said the media was helping him and the team build a wall around the program, but just be honest with yourself. The head coach for the Ags has had to deal with some pretty substantial distractions this offseason. I know Sumlin had his drop the mic moment, but it didn't take three questions to get there, and it was far less of a whiny fit. Hell, even when the Athletic Director and SID read a statement to not ask questions about Manziel TWICE he even handled the situation well. There's a reason sports media folks around the country are falling in love with Kevin Sumlin, but they're going to have to wait in line behind me.