[Additional note: Some statistics are pulled from cfbstats.com, which does a fantastic job, while many others are pulled directly from the charting I do myself. In some instances there are slight variations between the two. Just ignore them. If differences exist, they should be minor and/or insignificant. One other note: when I chart, I am not including plays in garbage time, but occasionally I will pull stats from cfbstats.com that include the entire game. So there will sometimes be slight differences again. Just know that I will do my best to not present a statistic unless it is valid or meaningful based on the data I looked at.]

Now things are heating up! Two games down, 12 to go, hopefully. More importantly for Aggie fans, Johnny Football got his first start and did quite well. This week I will again throw out a bunch of numbers for you, a little analysis of those numbers, and then in an effort to really make things pop, a couple pictures for the non-readers in the group.

With a little more data to go on, we can now see a little more in the way of trends. First, we'll talk personnel. The Aggies are most definitely a "one back" team. Sumlin has talked about this before. How much of a one back team are we? See my fancy picture below (The numbers on the bottom, like 10, 11, 20, etc., refer to the number of running backs and tight ends. So "10" personnel is one RB, zero TE's, and therefore four wide receivers): 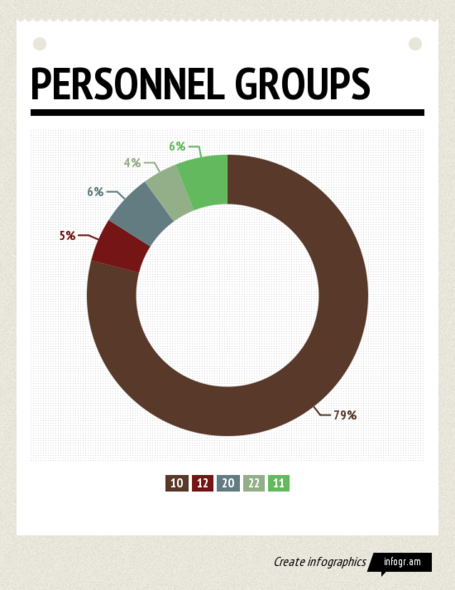 As you can see, about 80% of our plays are run with 10 personnel. I personally get all excited about the idea of using different groups, like 12 and 20 personnel, and while we will no doubt see those sprinkled throughout the season, the fact is, we are a one-back team first and foremost. Notice also that through two games, we have not yet run a snap with zero running backs on the field. Any five-wide formations we've run have only occurred through sending a running back in motion out to a receiver spot (and even that has only happened a few times).

As for the SHSU game, some quick numbers and notes:

OK, I could keep beating you over the head with superlatives from an easy win against an FCS school, but let's move on to the full season data. Again, each week these numbers will become more and more meaningful, and I don't claim that some of these are worth much yet, but nevertheless, there are things to be learned from them.
One thing I chart is the different types of runs we do. Below is the cumulative yards per carry totals of the different types. There is no category for counters yet, because aside from a couple pulling linemen on the goal line (which I still categorized as "lead/dive" plays, we haven't run any counters yet. Last year we started showing some counters and a beautiful QB counter that worked very well. 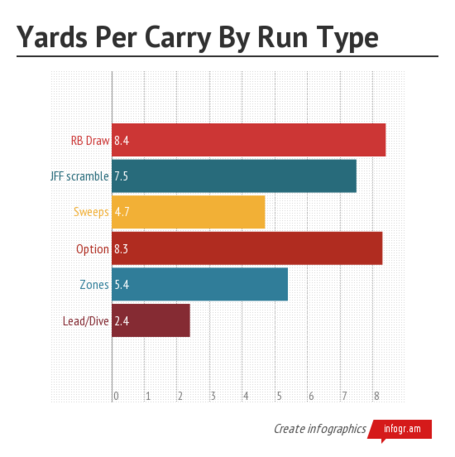 One note about the low number for the "Lead/Dive" category: those are mostly happening in short yardage and/or goal line situations. They are still very effective. I categorize the standard shotgun handoffs designed to go inside the tackles as zone plays, unless it's a draw, and I call it a sweep if it's designed to go outside the tackles. Options are self-explanatory, and if/when we see any true read-options, I'll add that category.

In case you're wondering, all of our running backs have been effective at this stage of the season, which is why I just lumped them all together. If I ever notice any individual trends later in the year, either good or bad, I'll pull the numbers for those.

So, with a successful run game, we should be killing it on play action, right? Well... it depends on how you look at it. Overall, a 71 yard TD pass from Matt Joeckel to Ricky Seals-Jones and a 38 yard pass from Kenny Hil to Ja'quay Williams make our overall numbers look good. But for some reason, Johnny Football has had horrible luck on play action this year. 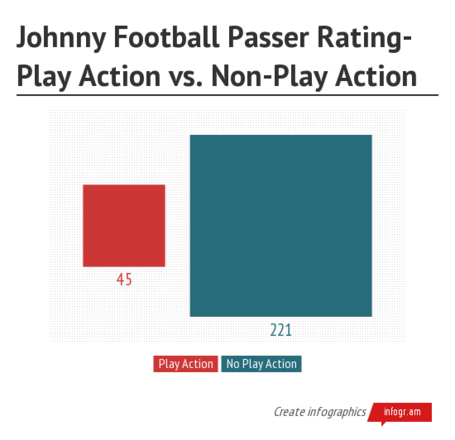 In case you're wondering, the actual numbers on that are:

Just keep in mind that it's still early in the year, so those numbers, while interesting, aren't anything to panic about.
So we all know Johnny's favorite target is Mike Evans, right? We all know Mike Evans is a beast, right? Yes. And yes. I tweeted this stat yesterday, but here it is again:

So how about some more "Mike Evans is great" stats? 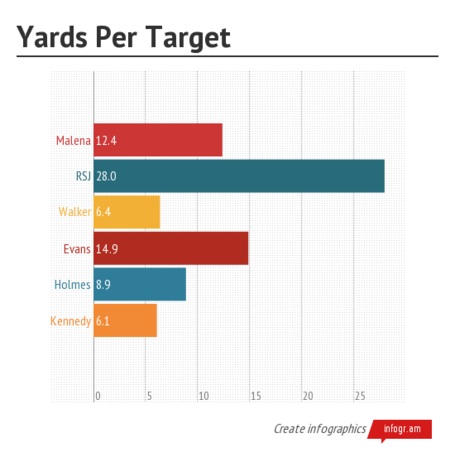 You can throw out the amazing number for RSJ, since he's only had three passes thrown his way and his 71 yard touchdown catch skews his number. As you can see, Evans' yards per target is basically double what it is for our other three starting receivers. I look forward to tracking these numbers as the year goes on.

Another thing I chart is what section (or quadrant, or... something) of the field each pass is thrown to. Then I can break down the success throwing to different areas of the field. Since there still isn't a ton of data (for example, JFF still hasn't completed a pass to the left half of the field between 10-20 yards deep), I combined a few areas into larger areas and came up with this: 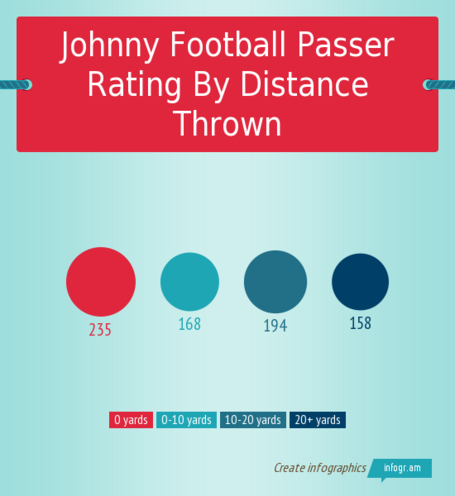 I suppose I'll stop for now. On Friday I will post my weekly "5 Stats to Consider," in which I give five meaningful stats and short analysis/preview of how those might be important for the game the following day. (Here is last week's post.)

I'll leave you with two more stats that I tweeted out yesterday. I'll try to periodically send out more info like this as I sift through everything.