Include your name, where you're from, phone number (optional), and a description of any images or videos.
Text GOODBULL to 99000 for a chance to win. Presented by Aggieland Outfitters 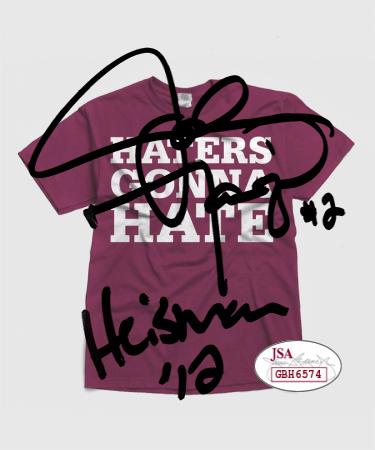 Well. Of course the big news last night was that Jim Darnell, the Manziel's tough, smart, Texas lawyer (he wears a damn cowboy hat, folks) had some bold words in defense of his new client. He even went so far as to predict a start for Johnny in the Rice game. This is a guy who's run up against the NCAA before and has this to say about them:

I think he and Johnny will get along just fine.

Practice. The DMN gives us a pretty decent Thursday wrap-up. We'll be going into much more depth later on (probably next week or so) but it's encouraging to see that Obioha and Ennis are back full-time on the DL. And it looks like Tommy Sanders has locked up a spot at LB. Yeah, and the offense is going to be okay by the way.

You know who I can't wait to see in 2013? BEN MALENA. This guy has worked hard for four years now; took over as a sophomore in the bowl game against Northwestern, had a great junior season, and is about to unleash as a senior. To me, he and Hurd are the perfect guys to take over as leaders of this team after we lost so many seniors from last year. That's why this is your Friday GIF: