So we can't get a Waffle House in College Station. What's the motive behind this? Is the College Station breakfast food market so saturated that WaHo feels it won't compete or is there...ANOTHER MOTIVE? HMMMMMMMMMMM? 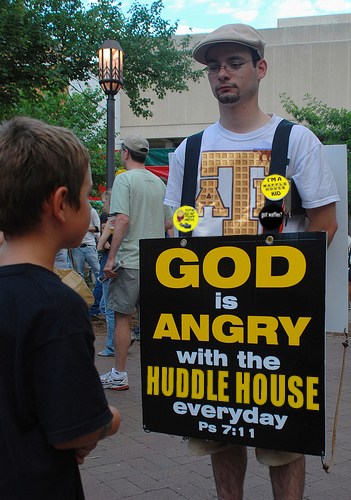 Here is thacktor (presumably) protesting the absence of a Waffle House in College Station, Texas.

I've only twice shoveled breakfast foods down my gullet at a Waffle House. This is as sad of a public confession from me as the revelation to Twitter that I had never seen "Point Break" in its entirety until last night (The ex-Presidents are, in fact, surfers!). I will say that the platter of waffles, scrambled eggs, smothered and covered hash browns, bacon and coffee were mana from heaven that fueled my drive home from Florida last summer. Delicious. Filling. Wonderfully nice staff. In that summer before the Aggies entered the SEC, I wondered about all the commotion regarding WaHo. After discovering the glory for myself, I became a Wafflevangelist.

On my journey home I wondered how big of an impact our journey to the SEC would have on the Texas Waffle House expansion plan. I was sure there'd be at least a new flagship store in the College Station area, perhaps offered as a "welcome home" present to the newest members of this fine athletic conference. As cuppycup and others began to rally the troops with the #WafflesForAgs movement, I couldn't believe that a company could so blatantly ignore demand. It's not often that a community rises up as one and declares, "HEY! WE REALLY WANT TO START GIVING YOU MONEY FOR YOUR PRODUCT! PLEASE, SELL US YOUR WARES!"

But what if it wasn't a business decision? 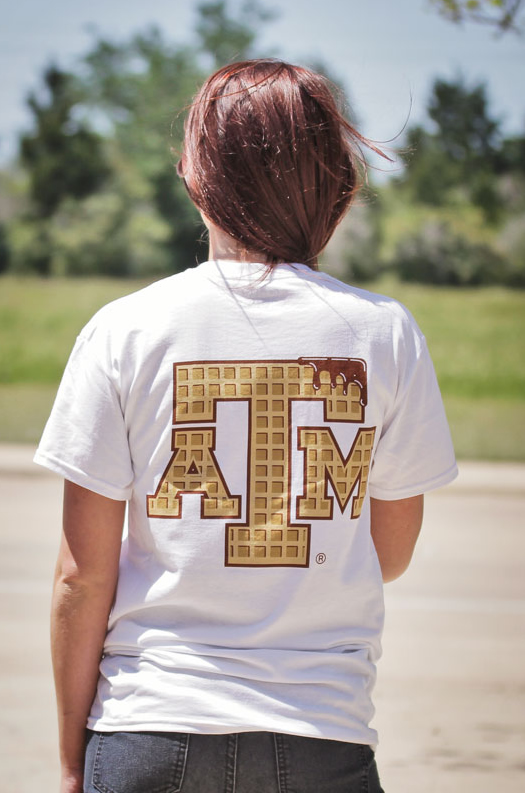 We give away these #wafflesforAgs t-shirts from Aggieland Outfitters as prizes for contests on the website.

Nobody expected Texas A&M to win more than 7 games last year and, if you took 7, you were considered a Sunshine Pumping, glass-is-considerably-more-than-half-full optimist. You know, the kind of fan who still thinks Lance Armstrong didn't dope. The unfathomably faithful Justin Bieber apologist. Well, Texas A&M won 11 and we still don't have a Waffle House. This is no coincidence.

The SEC is the land of Waffle House. It's a Southern icon. It defines breakfast for a great deal of people. When we interviewed ESPN Senior Writer Wright Thompson, he asked us why we don't have a Waffle House in College Station. The Texas A&M clothing store Aggieland Outfitters made #wafflesforAgs t-shirts. Yet there is no Waffle House in College Station. The SEC is also the winner of the last 7 National Championships in football. Shouldn't it be a customary welcome gift for Waffle House to open a new franchise for the SEC's newest addition? A good luck charm?

Welcome to Turner Field! RT @WaffleHouse: Feel the need, the need for the @Braves pic.twitter.com/4nNOd3LOct

The Atlanta Braves opened a Waffle House in Turner Field last week. "Big Deal..." you say? Well, it kind of is. Since the Turner Field Waffle House opened it's doors, the Atlanta Braves are undefeated. It's not a 2 game streak, either. The Braves have won their last 9 games since welcoming their breakfast overlords with open arms. The Aggies, with considerably less WafflePower, went 11-2 last year.

I think Waffle House knows something. They know that Waffles are power. Waffles are the source of strength, determination and complex carbohydrates needed to win. The people at Waffle House are also oppressive. They don't believe that the people can choose to have this power. They believe that they are the chosen few. The ones who would sit in their ivory tower with their hash browns and fluffy omelets, sipping coffee and saying, "Let them eat pancakes!" These tyrants have the source of victory stashed away in their golden safe, only giving to the fans they deem worthy. Apparently, Aggies, it's not us.

Watch the Braves this week. Watch them win. Look at their fans, sitting there with that "Oooooooh, I have Waffles and am watching my favorite team" shit-eating grin on their faces. Look at them and know that the Waffle House isn't the facade of happy employees who gladly present you with the breakfast you need (deserve), they're something much more sinister. They are the keepers of the Grail. They are Opus Dei dripping with syrup. They know the secret to victory, and they will keep it from us. The secret's out, Waffle House. We're onto you.