Analyzing how the Rice Owls stack up against Texas A&M’s Fightin’ Texas Aggies in this week's Foundation of Facts...

Oh my, has it been a fun off-season.

There's no better time to start statistical comparisons than before the first game–prior to any noteworthy or correlative data that can be used to actually guess how these teams will really match up. There is, in fact, no way to predict these things so early in the season, but this is a fun pastime for me, so I do the best to use associated data from the past season and I don't dwell too much on the impossibility of extrapolating accurate datapoints from biased historical data. So, instead, I am essentially showing what might have been had these two teams met up at the end of last season.

Yes, Johnny Manziel will have to sit out the first two quarters - much to the chagrin of Longhorn fans who were salivating at the thought of Texas A&M and its star athlete tripping at the starting line–but we Aggies are okay with that. In my opinion, he should not have to sit out a single minute, but this is a small price to pay to clear the Heisman winner's path to his inevitable 2nd Heisman Trophy.

Rice is not going to exactly be a pushover–oh, wait, yes, they most certainly will be pushovers. Regardless of who starts in Manziel's place–#16 Matt Joeckel or #7 Kenny Hill–the Aggie offense will thrive. Did you not see the beating they put on that hapless Big Dumpster Fire (re: Big12) team in the Cotton Bowl? It was a massacre. Yes, Rice won it's last six (6) games, including a bowl victory over Air Force and a narrow victory against itself in the Blue-Gray Spring Game, but this just won't matter on Saturday. The Aggies are hot, they are tired of being disrespected by the media, they are irritated that their Heisman quarterback is out for essentially doing nothing "really" wrong–they are just plain angry. It probably doesn't help that no one thinks the Aggies will beat Alabama, so they have something to prove.

Some other statistics to pay attention to down below:

2. Rice's pass defense was pretty good last year in a pass-happy league. They forced some fumbles and McHargue rarely threw an interception (five INT's in 325 attempts or 1:65 ratio) 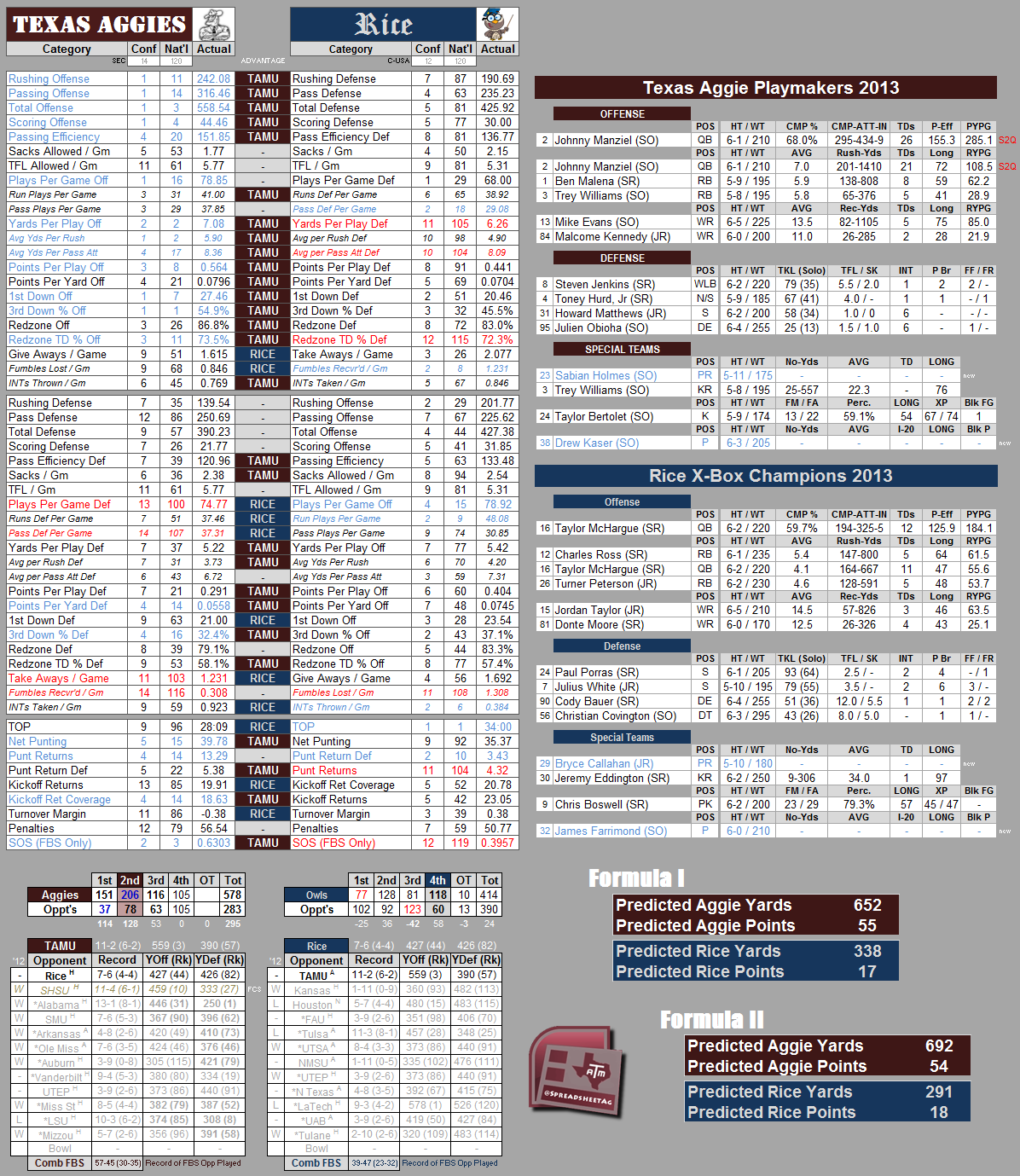 1. The A&M offense was essentially unstoppable all season long in 2012 except for 2 quarters versus Florida and 2 quarters versus LSU (both Top-7 defenses) - and looks to repeat that performance despite losing OC Kliff Kingsbury, OT Luke Joeckel, and WR Ryan Swope.

2. I expect new Offensive Coordinator (but longtime Running Backs coach) Clarence McKinney to show a pretty vanilla run-oriented attack in the 1st Half for several reasons: 1) Rush Defense was a weakness of Rice's in 2012, he was a running backs coach, we won't have Johnny Football at the helm and will instead have a first-time starter in either Joeckel (capable RS-JR) or Hill (athletic True FR).

3. One stat I'd REALLY like to see corrected this year is the turnovers. We didn't give away TOO many balls last year (good); but we did not force any either - except a few VERY key TO's in high-stakes games (Alabama).

4. The Aggies scored first in every game last season. They come out at breakneck speed and accelerate through the 2nd quarter. I have no reason to believe this does not continue in 2013. Rice, on the other hand, starts pretty slow and doesn't ramp up until the 4th quarter - a sure sign of an inferior team. A&M should be up by 3 TDs at halftime, and should dominate the entire game.

5. Not listed in the Top-3 runners for A&M above are Brandon Williams and Tra Carson. Brandon was a 5-star recruit who committed to Oklahoma, played his true freshman year there, then transferred to A&M and sat out 2012 - he is a stellar runner. Tra had a very similar situation with Oregon; however, he is a big bruiser type back and should steal touchdowns in the redzone - if this was a fantasy league, you'd probably put him on your bench for that reason.

6. Rice has a decent special teams group with a returning KR who average 34 yards a return and scored a 97-yard touchdown last year. Oh, he's also a TE and stands about 6-2" and 250 lbs - goodness!

I hope you enjoy this feature and will come back next week to see how the Aggies will fare, statistically, against the Sam Houston State Bearkats in Game 2.

LOOK AHEAD: Sam Houston State is a FCS school, but they are A&M's kid brother of a school. The teachers and technicians who come out of SHSU are probably 90% A&M fans but they also want so bad to beat us at something... anything. They played with a chip on their shoulder in 2012 and, if memory serves, attempted to injure Johnny Football during the game - which prompted Christine Michael to intentionally harm one of their players and get ejected (but my memory is going bad with the lack of sleep I've had lately).