The Rice Owls enter 2013 with 19 starters returning from a 7-6 season that culminated in a 34-14 win over Air Force in the Armed Forces Bowl. Their entire offense is based on the read-option and the legs of their quarterback. The A&M defense must play sound, gap-assignment football on Saturday in the season opener.

One of the big concerns heading into the 2013 football season is the young and inexperienced Aggie defense. Consider this stat: Only 5 current defenders have double-digit starts in their career: LB Steven Jenkins (16), DB Deshazor Everett (12), DE Julien Obioha (11), DT Kirby Ennis (11), and DB Toney Hurd Jr. (11). Add in the fact that both Kirby Ennis and Deshazor Everett will be suspended for part or all of the game on Saturday, and we are going to be watching a lot of new names on Kyle Field. The first test out of the gate isn't going to be easy for this group. The Rice Owls, believe it or not, have a very good football team this season. Rice returns 19 starters from a 7-6 season that culminated in a 34-14 victory over Air Force in the Armed Forces Bowl. This year, they are poised for a 9-10 win season and a shot at the Conference USA title. The Owls return leader and quarterback Taylor McHargue, all 5 starters along the offensive line, 6'5" receiver and bowl game MVP Jordan Taylor, and running back Charlie Ross. The young Wrecking Crew is going to face an experienced group, so defensive coordinator Mark Snyder will need to have his players in the correct position to stop the Rice read-option attack. Let's look at how he can achieve that.

Here is all you need to know about the Rice offense: everything they do is based off a read-option look. McHargue is going to primarily be a running QB, with his feet being the most dangerous aspect of his game. You may also see Driphus Jackson enter the game a few times—Jackson took over for an injured McHargue in the Armed Forces Bowl and led the Rice offense to 26 unanswered points. He is actually a better runner than McHargue, and head coach David Bailiff has committed play time for him on Saturday.

Let's take a look at a well defended read-option by the Air Force defense with Jackson at QB. 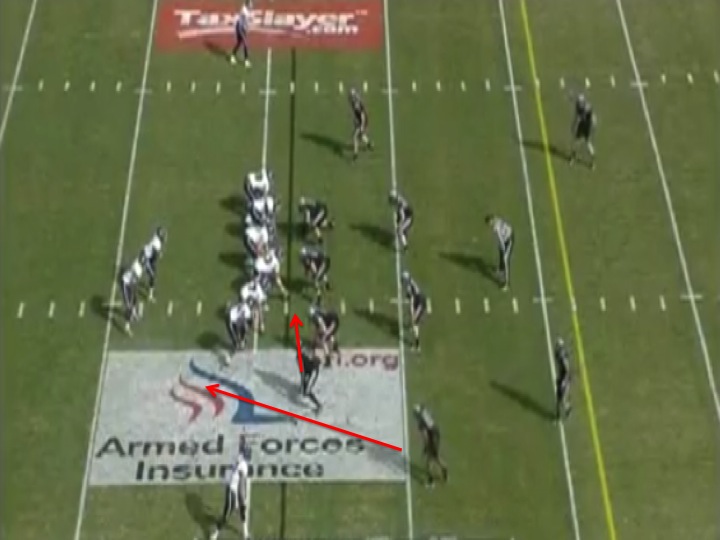 Rice is going to play the whole game out of a shotgun or pistol formation. They will also have a tight end at the end of the line. The tight end in this example has graduated: Vance McDonald, second round draft pick by the San Francisco 49ers. Redshirt freshman Connor Cella will take his place on Saturday, a player who Bailiff has raved about during spring and fall camps.

First let's take a look at how Air Force defends this play. Air Force plays a 3-4 defense with 3 down linemen and 4 linebackers. The outside linebacker near the bottom of the image (highlighted) is going to crash down hard on this play, towards the inside of the offensive line. On this particular play, Air Force has called the corner to the bottom of the image (highlighted) to come in on a blitz. Also note that the middle linebacker on this play will be moving laterally to fill the area of the crashing outside linebacker and blitzing boundary corner. 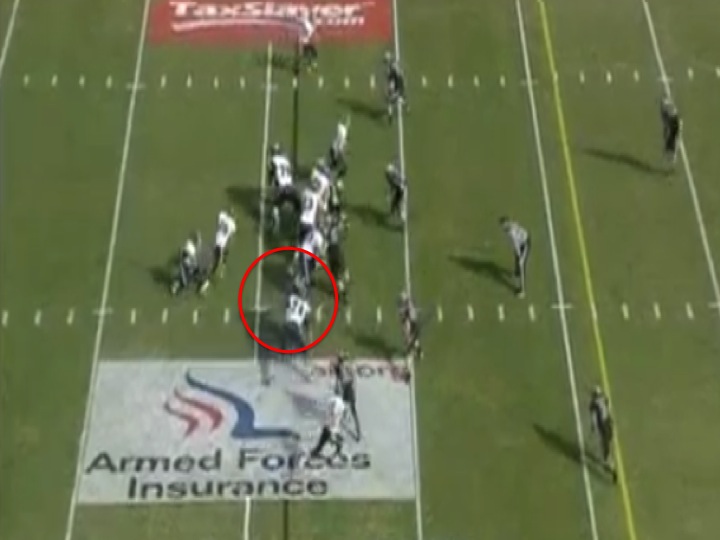 For Jackson (QB), he is to read the outside linebacker who will crash inside. This linebacker is supposed to be unblocked on this play, but will end up being blocked by the right tackle. With the linebacker going inside to make a play on the running back, Jackson keeps the ball and tries to scramble to the void created by the linebacker (highlighted). 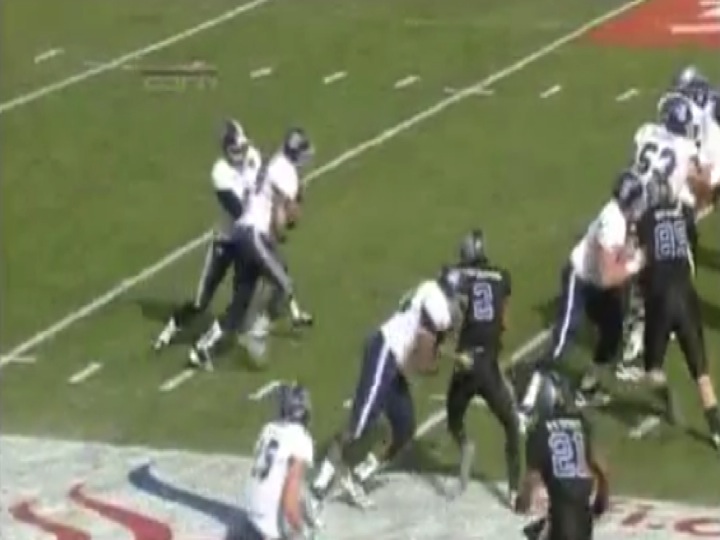 Here is a closer image for you to see what is developing at the line of scrimmage. Because the linebacker (#2) is playing inside, the right tackle is forced to block him so he doesn't disrupt the option between the quarterback and running back in the backfield. Jackson reads #2, and will keep the ball and try to scramble to the outside. 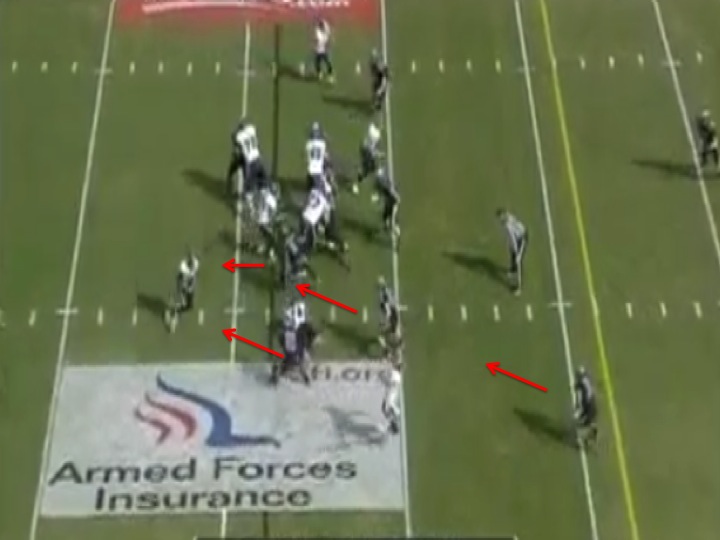 After Jackson has made his decision, look at where the defensive players are positioned. The linebacker who crashed inside keeps Jackson from running towards the middle of the field. The middle linebacker has moved laterally to occupy the gap where #2 was originally positioned. Due to the corner coming in on a blitz, the corner has outside containment of Jackson and is unblocked, ready to make a play on the QB. Finally, there is a safety 10 yards from the line of scrimmage who is ready to clean up any missed tackles. Every gap has been filled by the Air Force defense—Inside, up the middle, and outside with another defender over the top to help. 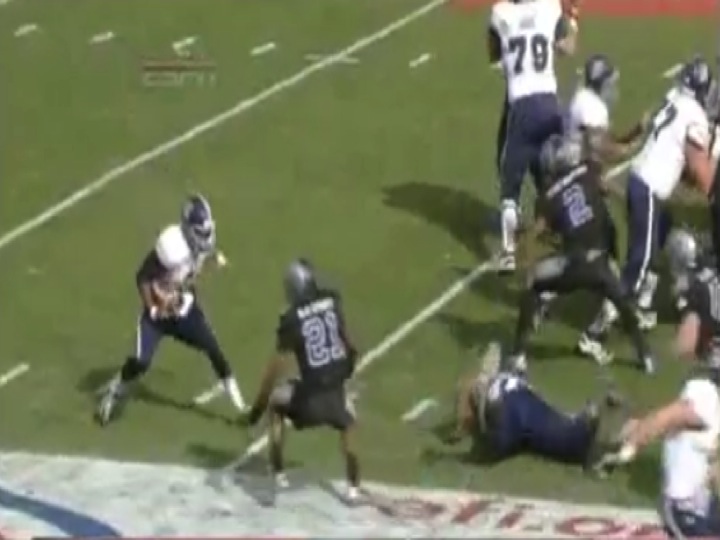 Jackson has no choice but to try to juke the defenders who are coming in for the tackle. 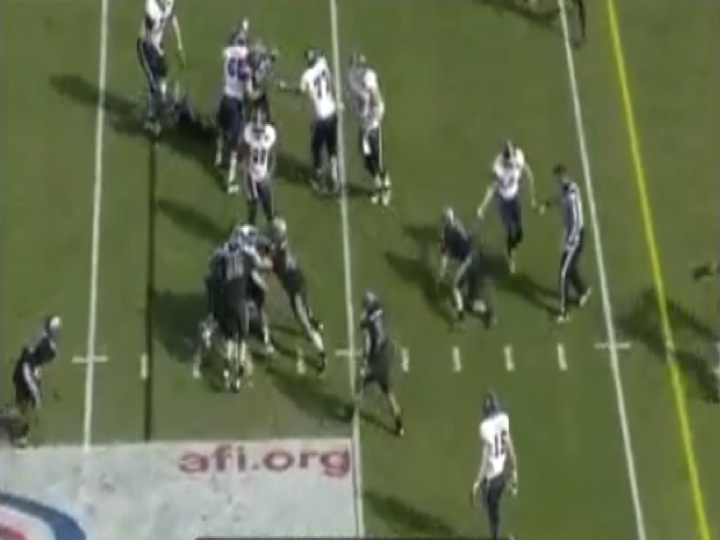 But he only gets a two yard gain on the play and is met by a host of Air Force defenders.

This play was executed perfectly by the Air Force defense. There was nowhere for the QB to run, because they had filled every possible gap by playing sound, gap-assignment football. The defenders knew where they had to be and got into position to make the play. This is the kind of focus the Aggie defense will need on Saturday to be successful. Will all the defenders know what their assignment is? Will they not be fooled by the fakes and fill their correct gaps? If they do, they will have no trouble stopping McHargue and Jackson from having breakout games in front of the ESPN cameras.

More importantly, this play was assisted by the play call from the defensive coordinator. Mark Snyder has shown before that he will blitz corners off the edge at times, just like Air Force did here. It prevented the corner from being blocked by receiver Taylor (#15), and allowed him to make the play on the QB. These are the kinds of calls that Snyder can make on Saturday and during the season to help his young defense come up with critical stops. 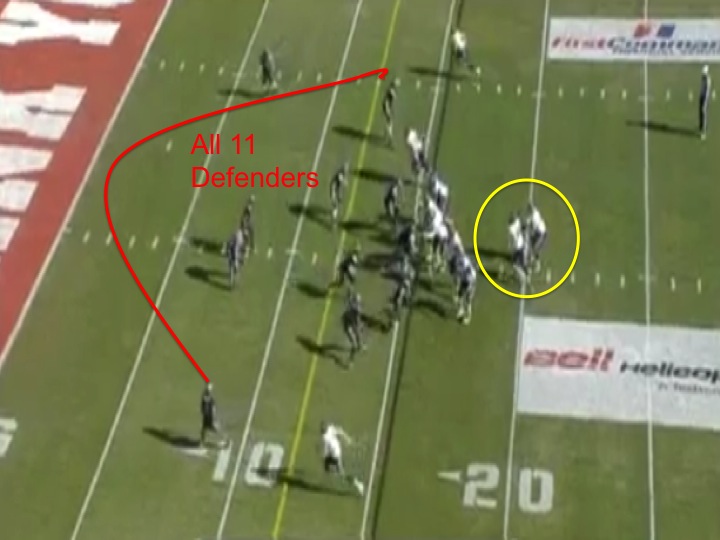 As I said in the opening, Rice does everything out of the read-option. The defense has to be ready for them to throw off of it as well. Here inside the red zone, Rice fakes the read option in the backfield (highlighted) which causes the Air Force defense to be sucked in toward the line of scrimmage expecting a run. 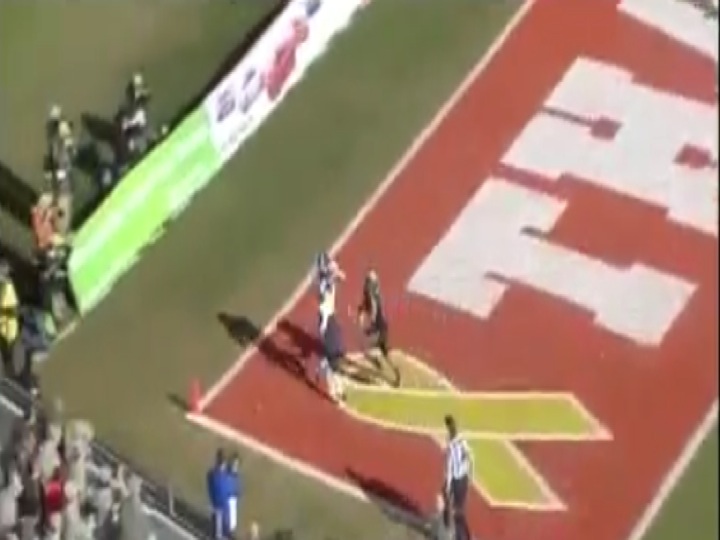 This allows for a one-on-one match-up between the 6'5" Taylor and a shorter defensive back in the endzone. Taylor wins here, scoring Rice's first TD of the game. All of the corners will have to be ready to face the larger skill position players that Rice will bring with them. In fact, every receiver on the Rice roster is over 6 feet tall, many of them being 6'2" or 6'3". Normally you would worry about that match-up, but the Aggie defensive backs get to practice against Mike Evans and Ricky Seals-Jones every day so they should know by now how to play against a bigger-bodied receiver. Hopefully, this is a non-issue. 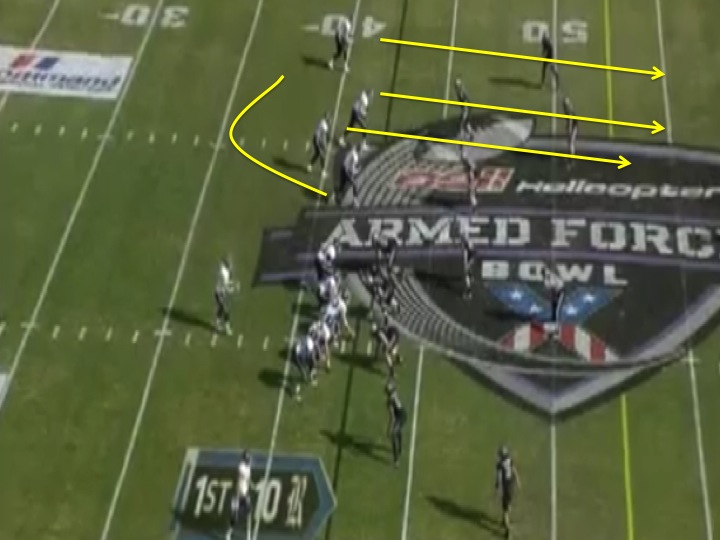 Here are a couple of bonus notes. On the few occasions Rice isn't running the read option, they still fake towards the line of scrimmage, drawing in the defense and then try to throw it down the field. Unless it is 3rd down, Rice will always be looking to take shots down the field with their bigger receivers. Here in a 5-wide set with a bunch towards the top of the image, the most inside receiver will fake a bubble screen while everyone else runs down field. Just another example of a play that could fool the young Aggie secondary, causing a defensive breakdown in coverage that Rice could take advantage of. If Howard Matthews or Clay Honeycutt is playing close to line of scrimmage in safety support, they can't be faked out by any short passing routes. They must be aware that Rice is going to try throwing down the field. 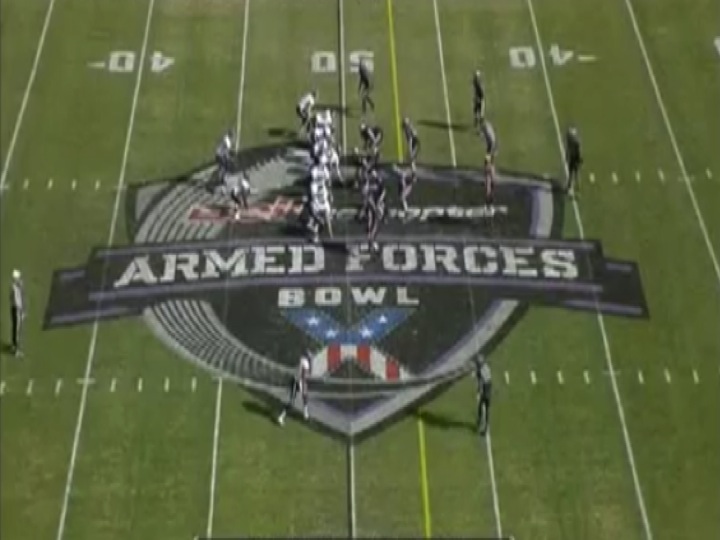 And finally, Rice will also come out in a wildcat formation for short yardage situations. Here, 6'1" 230 pound running back Charlie Ross took a direct snap and ran to the left of the formation for a first down on 3rd and 2.

Saturday will be a testament to how well the defensive coaching staff prepares their players. If the players put themselves into the right positions, they should have no trouble stopping Rice. If they fail their assignments, Rice will look to control time of possession and keep the Aggie offense off the field as long as they can.

At least until #2 comes into the game.