The NCAA met with Johnny for 6 hours on Sunday, and he denied being paid for autographs. An update with all of the latest information surrounding the illegal memorabilia signing allegations.

Share All sharing options for: Johnny Denied Being Paid: Update on Autograph Gate

According to Billy Liucci, Manziel will face a suspension:

Latest on Manziel? Per multiple sources, he'll be suspended for first half of season-opener versus Rice on Saturday.

ESPN is currently reporting that Johnny Manziel was interviewed by the NCAA on Sunday in regards to multiple reports that he signed at least 4,400 autographs for money. These reports were confirmed by TexAgs.com reporter Billy Liucci and another A&M insider on Twitter late last evening. According to the ESPN report:

NCAA investigators spent a large chunk of Sunday with Johnny Manziel, questioning the Texas A&M quarterback about allegations from memorabilia dealers that he accepted payments for autographs, a source familiar with the investigation told ESPN.com on Monday night.

The governing body's officials met Sunday with Manziel, the reigning Heisman Trophy winner, for nearly six hours on the College Station, Texas, campus, the source said. It was unclear whether the NCAA was satisfied with the initial meeting with Manziel or if it would require additional time with the redshirt sophomore. Texas A&M's season begins Saturday, at home against Rice.

Bruce Feldman of CBS - the same Bruce Feldman who was removed from ESPN after collaborating on the Mike Leach book - added to the story this morning; reporting that a source close to Manziel says that he explicitly denied taking any money during his meetings with the NCAA.

Asossiciate Athletic Director at Texas A&M, Jason Cook, tweeted late last night about whether or not the staff would answer questions at Today's presser:

One key phrase used in that sentence is "starting QB". This tweet came after the meeting with the NCAA, and Texas A&M is showing no indications of plans to sit Manziel for the opener against Rice.

If the NCAA has come to a conclusion, I thought they might draw it out until Thursday or Friday so that College Football coverage would drown out any bad press. This revelation may speed up the reporting process a bit, and may be why this was leaked in the first place.

Continue to hear Thursday as most likely day that A&M hears from NCAA enforcement staff.

Later in the afternoon, some reports are coming out are saying that information may be release on Wednesday. Joe Reingal of KENS 5 in San Antonio, TX tweeted that he has sources that he trusts saying just that.

Last week A&M Chancellor John Sharp voiced his support for Johnny Manziel in both a newsletter to donors, and through an interview with Steve Fullhart of KBTX. There was speculation that his motivation could have been to push the NCAA into speeding up the investigation and reach a resolution before the beginning of the season. The recent developments indicate that the NCAA may be doing just that.

In Chancellor Sharp's letter, he specifically called out one of the first autograph brokers referenced by ESPN, Drew Tieman. Tieman reportedly had Johnny at his house to sign autographs during the week of the 2013 BCS Championship game. He made everyone aware of Tieman's history with drugs, and that he had changed his phone number, removed his Facebook account, and was refusing to work with the NCAA. Last Thursday, ESPN offered a rebuttal to Sharp's e-mail, stating only that "We stand by our reporting." They later added to the story that Tieman's Facebook account was also active. A quick review showed that Tieman merged his personal account into his business account, Kicks for Pennies, and removed at least one photo of him at the BCS Championship news conferences with Manti Te'o. 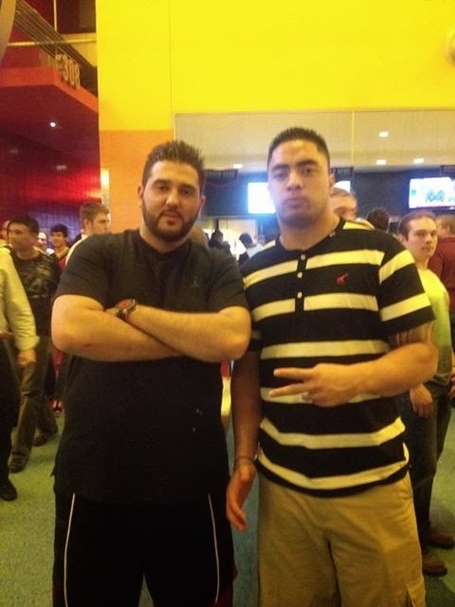 Darren Rovell of ESPN tweeted the following this morning, further attempting to clarify the claims made in his reporting of the situation:

Johnny Manziel denied signing a few items for Drew Tieman for free at airport, according to our sources. Hours later was signing at his apt.

Darren Rovell also speculated this morning that the family may have a right to sue the University if they sit Manziel without cause:

Manziels could claim tortious interference w/business expectations, damages status as NFL prospect, if he is held out, says @McCannSportsLaw

This type of action may go nowhere considering that Texas public schools have sovereign immunity; the same issue Mike Leach ran into when trying to sue Texas Tech for wrongful termination.

The fact remains that Johnny Manziel has been getting starter reps, the Athletic Department has referred to him as "the starting QB," and Texas A&M's Chancellor has come out to publicly to defend his innocence. If anything, A&M has shown consistently now that they have absolutely no plans to sit him down. It's game week and Kyle Field is going to be an incredible place when #2 comes running out of that tunnel.

This tweet came out from Billy about the impending announcement:

Hearing that Manziel situation could be on verge of resolution. Either this afternoon or tomorrow if A&M decides to issue press release..