A look at Darren Rovell's obsession with all things Aggie over the last month.

If you saw my article last week you'll remember that I talked about the most annoying week in Aggie history; the one before the Heisman ceremony. The last two weeks are now finding their own special place in my little hate filled heart thanks to a gel-laden stadium dog reporter, Darren Rovell. (Edit: Who, after posting this article, which he stated he read, blocked me on twitter. Yet he loves his detractors huh?)

It takes a special kind of annoying to not only get every Tweeting Texas Aggie pissed off, but to also have the Chancellor of our University, John Sharp, tell you off in a booster letter. It's incredible in fact. After John Sharp told him off we waited and waited to see how he would retort. We just knew he would make himself look ridiculous, and he didn't fail us.

Instead of manning up and addressing John Sharp directly, he decided to take the passive-aggressive child's way out and tweet about random crap that no one cares about. Tweets about how much Texas A&M boosters were spending on extravagances at our auctions. Anything to keep people interested in a narrative containing "Texas A&M" and "Lots of Money." 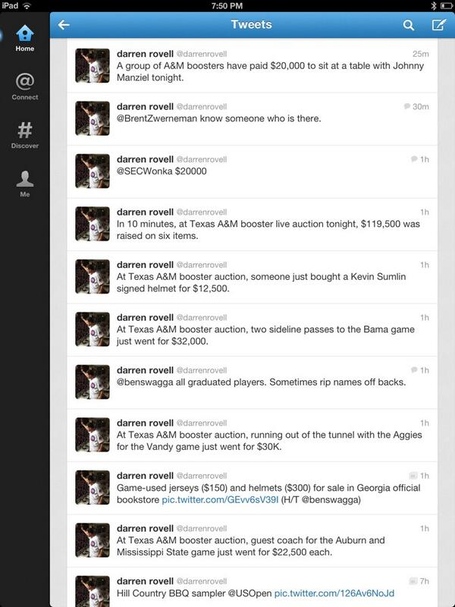 After that response, I started wondering: Just how often does Rovell tweet about us? How obsessed is this man?

So, I decided to do a quick analysis of his last few thousand tweets. First to see how often he tweets every day, and how often keywords (Aggies, Manziel, Darnell, Nate, Maroon, etc.) are contained in the tweets. Here is a visual: 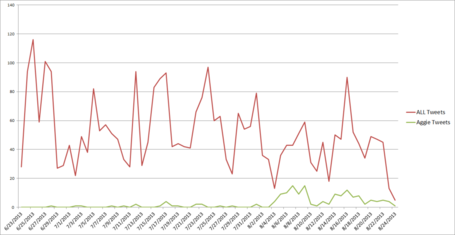 What you can clearly see is that he really didn't care about us until this month. This makes sense of course since he is directly involved with this story; which is probably why this story has so many holes in it.

Let's take a look at just the month of August so far. We weren't the only story going on this month. I think there were at least a couple of murmurs about a roided-up Yankee snitch. Surely Rovell was giving equal time to all of these major news items. 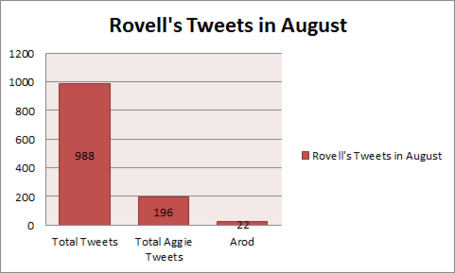 Or maybe not. A list of Aggie keywords showed that he spent about 20% of his tweeting time on Aggies, and about 2.2% on A-Rod. Obsession noted.

When you take a look, you really have to wonder why he cares THIS much. I get it, he is assigned the story, but this is a huge volume of tweets to send out when we have Preseason Football, contract deals, drugs in baseball, etc.

I think that the Manziel story is his baby because he personally vouched for the dealers and brokers that were used as sources. From past reports we know that Rovell has ties to memorabilia companies and dealers. You can also see from his twitter account, where he spends his time covering smothered hot dogs and Nike contracts, that this guy really wants to be respected as a legitimate journalist.

Now let's say you are a broker and you want to propagate this story without anyone trying to vet you too hard. Who do you take it to? You'd go with the reporter you met probably one time in Hoboken - the one that wants to be everyone's buddy - who will say "I met this guy, he is definitely a real broker, and we can trust him." Rovell's history shows that he trusts people too easily if they even smell a little authentic.

At this point, I think he knows he may have made a mistake trusting these guys. He is doing everything he can right now to try to paint us as the bad guys, because he might really believe that public sympathy can save his job if he screwed up this bad.

I get why we are your obsession now Darren, but it needs to stop. Come on back when you have some actual facts you want to give out, and we'll go back to being only mildly interested in your tweets.