Manti Te'o, ESPN, and how an epic failure resulted in our current predicament.

Manti Te'o & Collin Klein; a duet comprised of perfect young men that led to the most annoying week in Aggie history.

You remember that week. That week where you couldn't go to a blog, newspaper, or social media site without seeing a picture of a mugshot and Scooby-Doo. That week where we had to deal with librarian scrutiny and self-righteous Oklahomans. All of them throwing the word "integrity" at us as if it was holy water.

I really hated that week. It was all worth it in the end though, as it made hearing Johnny's name called out just that much sweeter.

That stage is where it all should have ended. Even after a valiant attempt by ESPN to create a deity out of an above average linebacker, and attempting to vilify a 20 year old phenom, the majority of sports writers in this country still voted for the most outstanding player. We won. The euphoria generated by that little bronze man allowed us to tune out cries of those fighting for the immaculate amateur athlete.

Little did we know then that our revenge would come swiftly thanks to Deadspin. The blind Irish favoritism we endured from ESPN, and the time we spent arguing with domers over each others' scruples, was all instantly forgotten. Not only was Manti Te'o perceived as a gullible lying buffoon, so was everyone at ESPN. Over the course of the season they continued to pound this heart breaking fish story down our throats. When it was our turn, we lined up to shove some crow down theirs.

Now we find ourselves back under fire and I can’t help but wonder: Did the embarrassment ESPN suffered during the Manti Te'o saga play a part in our recent drama?

On Jan 22nd, the New York Times reported an insider's take on what was happening at ESPN before the Te'o story emerged from Deadspin. According to the article, reporters at ESPN had been tipped off to the fake girlfriend a day before Deadspin received the same tip. So how did they lose a story this big?

Some inside the network argued that its reporters — who had initially been put onto the story by Tom Condon, Te’o’s agent — had enough material to justify publishing an article. Others were less sure and pushed to get an interview with Te’o, something that might happen as soon as the next day. For them, it was a question of journalistic standards. They did not want to be wrong.

"We were very close," said Vince Doria, ESPN’s chief for news. "We wanted to be very careful."

In a departure from what we seem to be seeing lately; journalistic integrity was their top priority.

"ESPN held the story, and then lost it."

Deadspin knew that there was more than enough credible information available to run with the story. ESPN on the other hand was so incredibly fixated on not ruining their journalistic reputation by running with a bad story that they made themselves out to be incompetent. The entire event was a mistake that they knew they had to learn from.

"If I had my druthers, we would have run with it," one ESPN executive said. "We’ve had a bunch of discussions internally since then, and I don’t think it will happen this way again. I wonder sometimes if perfection is the enemy of the practical."

What you find after reading the article is that ESPN, from beginning to end, completely botched the story. Deadspin took a jab at ESPN by stating that none of the sources they talked to had ever spoken with ESPN; they have no idea what information ESPN ever really had. The entire article reeks of an attempt by ESPN to save face in the entire ordeal.

I think that ESPN actually did learn from their incredible failure on the Te’o story, and we are currently seeing the after effects. When presented with the opportunity to break a story on college football’s biggest star, they ran with it.

"I wonder sometimes if perfection is the enemy of the practical."

Even A&M’s own chancellor, John Sharp, was willing to publicly point out how ridiculous the actors in the reporting of this story have been.

"Darren Rovell of ESPN, who broke this story, has been duped before. During his report on Johnny Manziel, he cites unnamed sources who refuse to provide an interview or any tangible proof. In fact, his "named source," Drew Tieman (initially referred to as the broker), was reportedly booked twice for possession of marijuana and placed on four years probation. He has taken down his Facebook page, changed his telephone number and is refusing attempts to be interviewed by the NCAA. It is surprising that the nation's largest sports channel would support publication with this lack of corroboration."

We don't actually know who ESPN's sources are on this story; which makes it impossible to trust any of the narrative being propagated. The sources may have their own agendas, and ESPN may have been running so quickly to keep interest piqued in the news cycle that they forgot to actually question their motivations. This wouldn't be the first time a lack of journalistic integrity has been a source of organizational face-palming for ESPN.

Even today, when issuing a response to Sharp’s statement they failed to double check the spelling of his name before publishing: 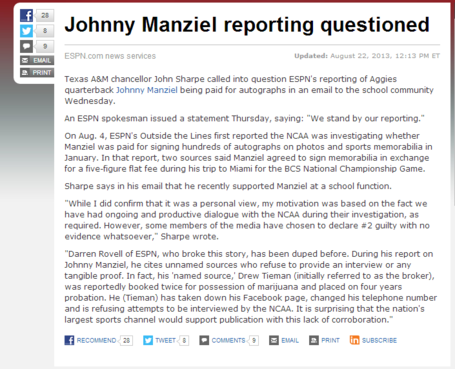 Even this response highlights the fact that they "stand by their reporting" and aren't "standing by their story." Words matter.

Never would I have thought back in January that a dead girlfriend, a gullible Samoan, and an incompetent media organization could converge and put our school back under the microscope. Unfortunately, that may be exactly what happened.

Let me know what you think in the comments below.