A distinct change for the Texas A&M offense in 2013 will be increased personnel options with a stable of talented running backs, wide receivers, and a versatile tight end in Cam Clear. Mix these players in with a no huddle offense and increased usage of the "packaged plays" concept and the Aggie offense will be a headache for defensive coordinators in the SEC. Let's take a look at how these concepts might work together.

In preparing myself for the onset of the 2013 football season, I have spent countless hours day-dreaming about how the offense could look this upcoming year. With Clarence McKinney calling plays, and the infusion of new concepts from co-coordinator Jake Spavital, we could see some interesting formations on the field with different personnel groupings as the season progresses, causing defenses in the SEC to constantly adjust and find new ways to defend the Aggie offense in 2013.

The inspiration for this little whiteboard session came from re-watching the A&M Spring Game, where our base formation was a three wide receiver set with both Ben Malena and Brandon Williams in the backfield. 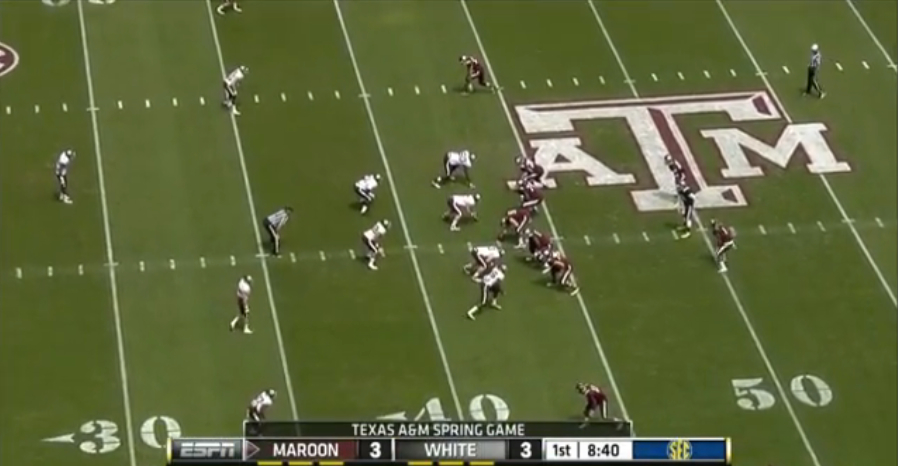 I, personally, really like this formation and personnel grouping. This allows us to put six pure playmakers on the field together at once (counting Johnny of course). And, with the incorporation of motions pre-snap, we can keep this personnel grouping on the field together without substitution during a no-huddle offense to change the looks we give a defense throughout a drive. 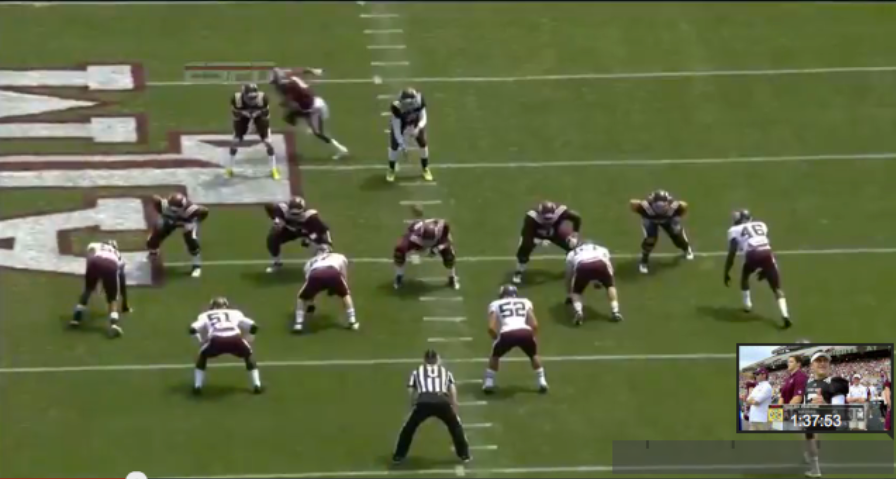 With Brandon Williams out with a leg/foot injury, and the emergence of freshman Ricky-Seals Jones as a starting receiver, let's use this group as our "base" personnel. Seals-Jones and Mike Evans are your outside receivers with Malcome Kennedy in the slot. The backfield is set up in a pistol formation (something I think we will see often in 2013 with Jake Spavital on staff) with Malena offset Johnny and Trey Williams behind the QB. 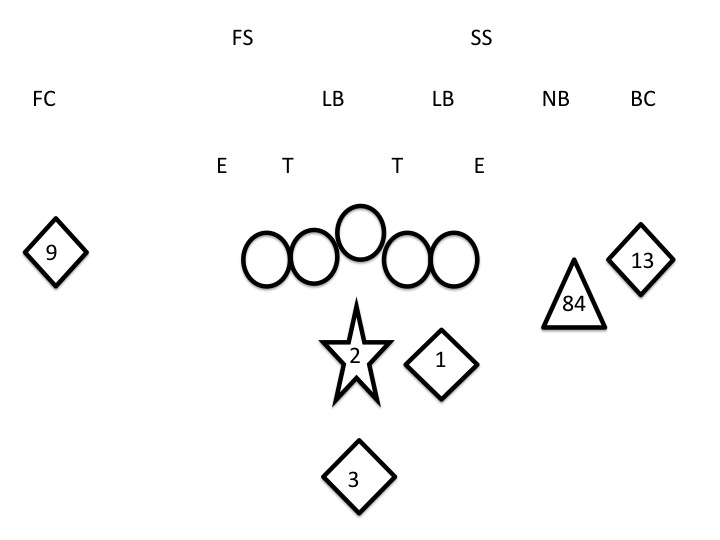 Now, the offense can run base plays out of this formation. As the drive progresses with a no-huddle attack, the offense will want to give the defense a new look to defend with little time to adjust. This could create mis-matches allowing our offensive playmakers to win one-on-one match-ups in space.

All of these set ups pictured below (besides the final one) are just variations of one, single base formation (three wide strong pistol pictured above) just with multiple motions and personnel groupings. For an offense, they must first read three keys in order to determine the play call --

1) who motions with the running back out of the backfield

3) where are the safeties positioned on the field

This then leads to three possible play calls --

3) Vertical pass if favorable match-ups against outside receivers

For a great read on the "packaged-plays" concept used widely in college football and now beginning to be used in the NFL, read this article from Chris Brown at Grantland.com 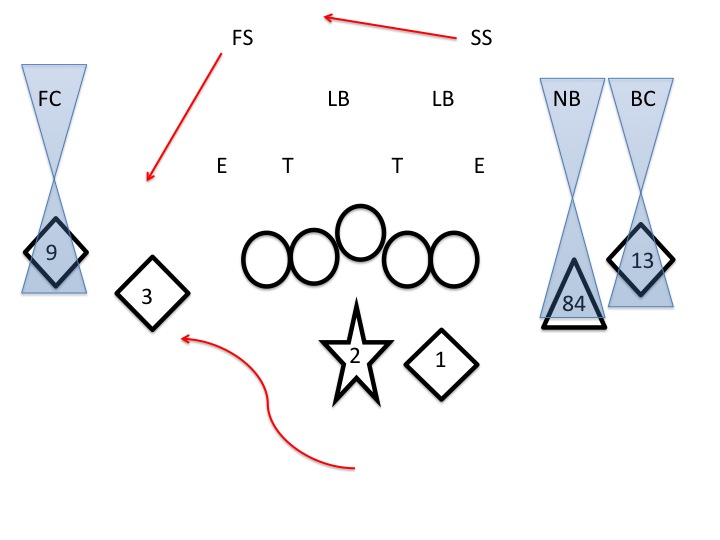 For instance, we have shown a running back motioning out of the backfield at times last season. In the case pictured above, Trey Williams motions out of the backfield to the left of the formation. This gives a classic spread formation look with four receivers. The defense has to account for the motioning Williams out of the backfield. If the defense chooses to rotate a safety down to cover Williams as pictured, the offense will now have the benefit of one-on-one match-ups with the receivers and a single high safety in either a man or cover 3 look. This type of defensive adjustment will most likely lead to a pass play, attacking intermediate to deep down the field. 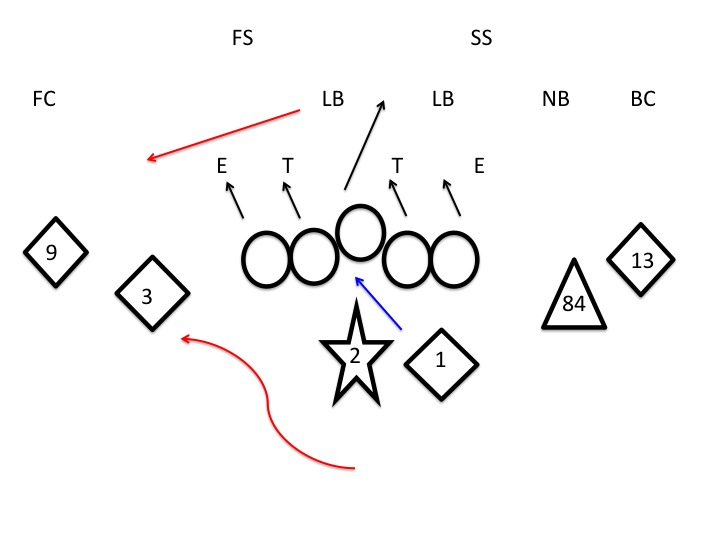 An alternative is that a linebacker moves with the motioning Williams. This leads to one less defender at the line of scrimmage to defend the run. Our offense will check to a run play, with favorable numbers for the offensive line to block. Here, a inside handoff to Malena would gain significant yardage. Additionally, a read-option look if called would take an additional defender out of the play giving the offense a two man advantage (7 men counting the QB against 5 defenders at the line).

Another option would be a simple swing pass to Williams in the flats when matched with a less-than athletic linebacker. Trey Williams is winning that battle in the open field 9 times out of 10. Plus, he has a 6'6, 245 pound lead blocker in Ricky Seals-Jones in front of him to provide some blocking support. Jake Matthews and Jarvis Harrison could also release after the snap to block the free safety and backside-pursuing linebacker. One missed tackle by Williams could lead to this play scoring easily. 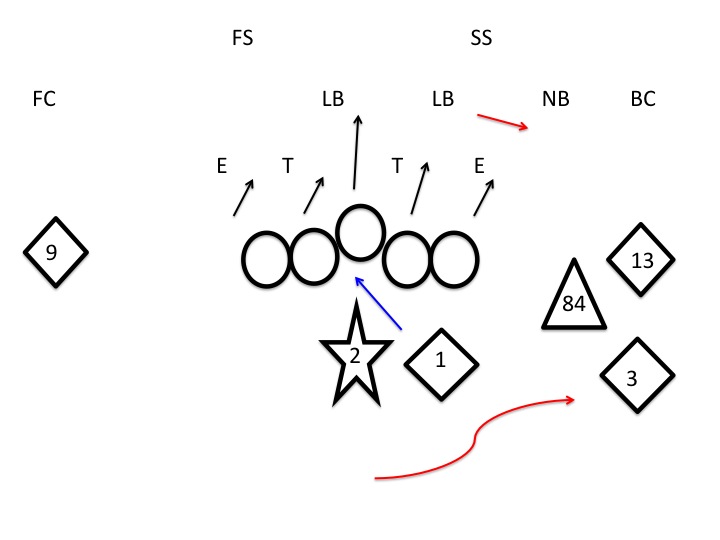 What if Williams were to motion to the opposite side of the field? This look causes even more headaches for the defense, and gives us an additional play call option. Here, the poor linebacker again moves with Williams, giving the same run-favorable situation with 7 men against the defensive's 5. 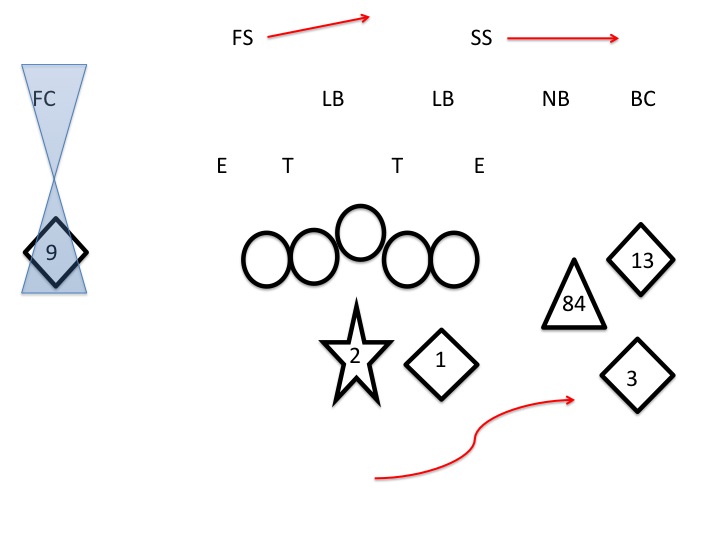 If the safety moves to cover Williams, the offense then has a clear one-on-one matchup with the outside receiver. No matter the route call, the defensive back is left to cover either a 6'6 Seals-Jones or 6'5 Mike Evans. If the free safety moving to cover the middle of the field over-rotates, it could lead to a try a deep fade and asking our physical receiver to win a match-up they have a clear advantage of with both size and wingspan. You have to love that match-up. 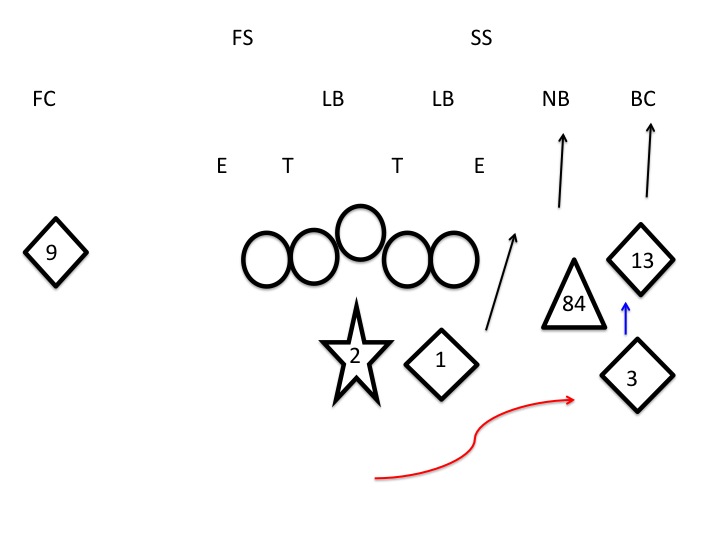 What if the defense doesn't adjust at all? Now the offense has numbers on the edge leading to a screen pass to Williams with blockers out in front, allowing Trey to work in space. 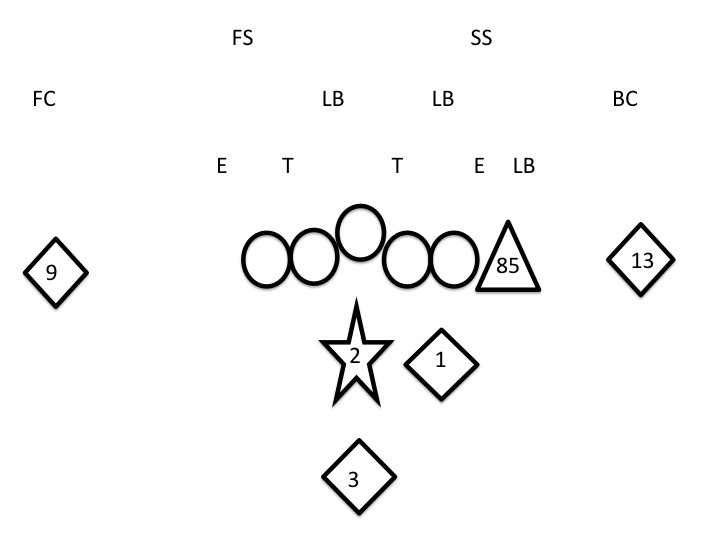 Let's substitute our third receiver out for a second and insert tight end Cam Clear. This is a run-heavy package. 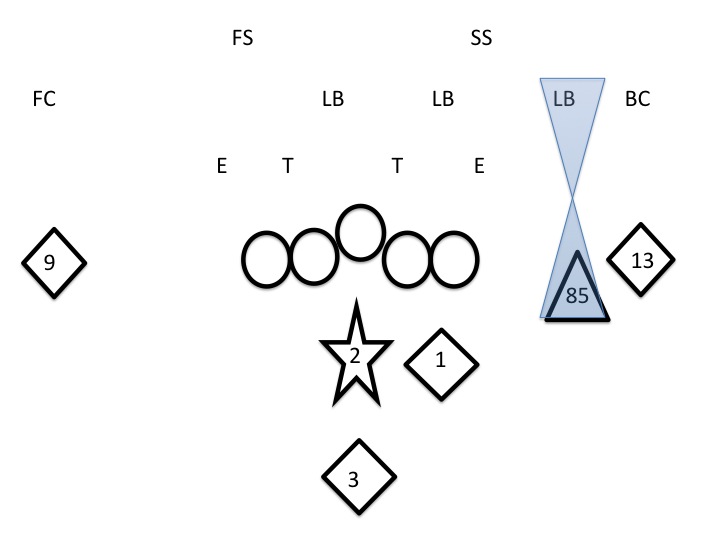 If the defense wants to substitute in another linebacker to match Clear coming into the game, causing them to play their base defensive 4-3 package, a simple adjustment would be to motion Clear into the slot. If the linebacker moves with him, that leads to a favorable passing match-up. Good look to any linebacker trying to match the agility of Clear in space. 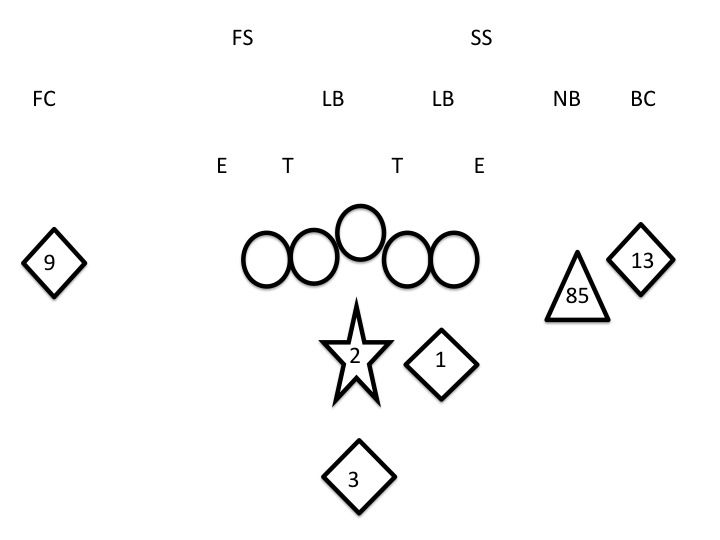 Let's say the defense doesn't change their personnel and leaves a nickel-package on the field. 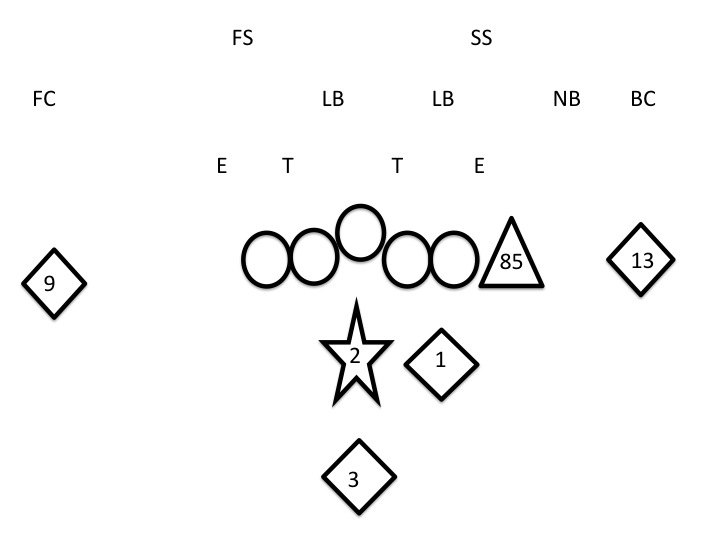 Then the opposite is true, as Clear can play on the end of the line leading to a run heavy formation and advantage for the running game. 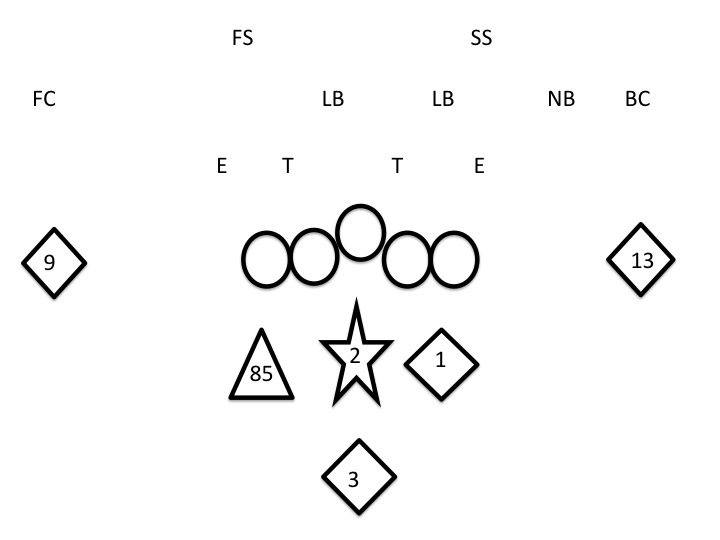 Another option would be to bring Clear into the backfield in a true diamond formation look, using him as a lead blocker in the running game. This may be my favorite formation we could use this season. 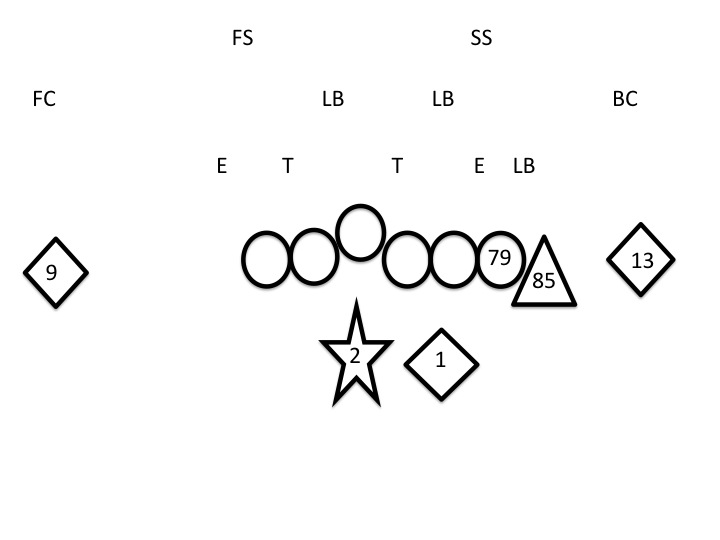 Finally, let's end with a short yardage situation. 3rd and 2 or 4th &1 to go. This is where the addition of Cam Clear could really benefit the offense. Last season, we brought reserve offensive tackle Joseph Cheek (#79) into the game in such situations as an extra offensive lineman. This year, we can pair Cheek with Cam Clear on one end of the offensive line. This allows the offense the power of a single wing formation, without even really moving the left tackle Jake Matthews to the other side of the field which is what you traditionally see. This gives the offense an entirely new look with new plays using misdirection with a scrambling QB in Manziel that a defense must prepare every single week.

Now, we just went over only 3 different play calls (inside run-read option, horizontal screen pass, vertical pass) from multiple formations. Yet, each of those plays were given different looks based on our formation and motions using the same personnel grouping. We haven't even included the five wide and four wide receiver formations we will certainly use every single week. Add in our last example of a short yardage situation using some single wing concepts, and you can begin to see how difficult it could become to prepare for the A&M offense in only a week's time. Additionally, a defense on the field must recognize all of these formations and personnel groupings while the ball is being snapped every 25 seconds. This gives our offense clear advantages without even factoring in a player's talent or skill level.

I would expect to see only some of these basic looks the first two weeks of the season. On September 14th, the entire playbook should be open and we can really watch the offense in action.