Let's do this. What if Johnny Manziel was a Longhorn?

Continuing our adventures in the absurd, the weekly hypothetical tries to take an objective look at what history might have been like had things been altered slightly. This week we’re tackling something that many folks have probably thought about… Johnny included.

Share All sharing options for: Let's do this. What if Johnny Manziel was a Longhorn?

Sorry for the hiatus last week. I was on vacation and the last thing on my mind was college football—that’s a lie. I spent many hours watching ESPN’s top games of 2012 and then switching over to the B1G’s showings of their best games (I was desperate). So this week I decided to return with a doozy of a question.

Longhorn reactions to Johnny fascinate me. If you peruse message boards you'll see a variety of reactions ranging from “I hate him, he’s the worst thing that’s ever happened to college football” to “LOLOL AGGYEEYEY YOUR QB CANT HANDLE FAME” to “good for that guy would have liked to see him in burnt orange.” But it’s a question that burns in many Longhorn minds because let’s be honest, had Johnny been offered by the horns out of high school, regardless of position, he likely would have taken it.

If my history is correct (and please correct me if it’s not), I think what happened was Duane Akina liked Johnny as a QB and tried hard to get Mack to buy into his opinion. Mack didn’t think Johnny fit the bill for what they were looking for as a QB and considered offering him as an athlete/safety. When it came down to it, Mack and Muschamp probably chose to offer Mykelle Thompson in that ATH spot instead of Johnny, and without the benefit of hindsight, I don’t think that’s a bad decision at all. Thompson was bigger than Johnny and projected better to that ATH/safety role. The only QB the horns took in the 2011 class was David Ash.

So let’s think about what the future might have been had the horns taken both Johnny Manziel and Mykelle Thompson in ATH spots.

Please note, this is not going to be snarky. Also note that I am by no means an expert on Longhorn football so any mistakes I make are unintentional.

Johnny enrolls in December 2010. Bryan Harsin is hired in January 2011 promising to bring a multiple set, “Boise style” offense involving an SEC power run game (at the preference of Mack Brown). How Johnny fits into the offense is inconsequential, because he’s been placed in the athlete role and is given the opportunity to compete for time at multiple positions. 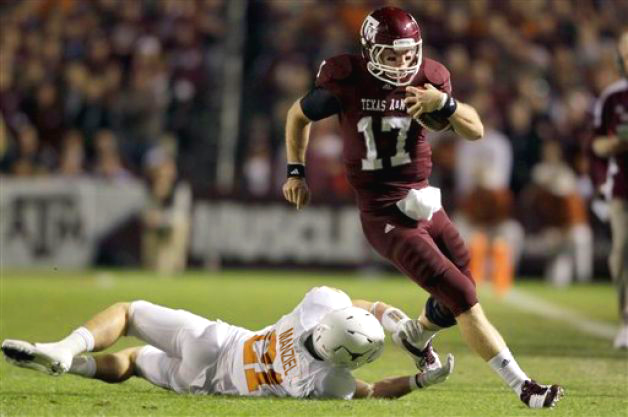 Redshirt year for Johnny. He spends time on the scout team and is primarily used as a defensive back, where his elusiveness and raw abilities do not go unnoticed. Prior to the Baylor game, Harsin uses Johnny to prepare for Robert Griffin and Johnny performs admirably. He is, however, unable to prepare them well enough to secure a victory in that game.

David Ash is pressed into duty following injuries to Garrett Gilbert and he splits time with Case McCoy. He starts the 2011 Holiday Bowl and is named Most Valuable Player.

In the spring of 2012 Johnny is given the opportunity to practice as a QB. He is erratic throwing the ball and makes poor decisions leading to interceptions. After a poor showing in the spring game, Manziel is listed as a distant third behind David Ash and Case McCoy. He’s given the opportunity to compete for a starting position at safety with Mykelle Thompson. Mykelle has a few inches and a couple of pounds on Johnny, so Johnny decides to remain as a quarterback reserve.

In the summer of 2012, Johnny attends George Whitfield’s QB camp and makes great strides in his decision making and passing abilities. He comes back to Fall Camp with a newfound confidence which shows on the field. After a strong showing in Fall practice, Johnny and Case both are listed as second string QBs behind starter David Ash.

Johnny sees spot duty as a back-up in 2012, but Mack shows preference to Case McCoy as the true back up (despite what is on the depth chart), culminating in Case replacing David Ash late in the TCU game while Johnny stews on the bench. Case then starts the following week in a loss to Kansas State.

As the Longhorns prepare for their Alamo bowl appearance, an unfortunate event occurs involving QB Case McCoy and LB Jordan Hicks. Both are exonerated, but Case McCoy loses a lot of trust with the coaching staff.

New offensive coordinator Major Applewhite releases the depth chart after spring practice. Johnny is yet again listed as co-back up with Case McCoy. Talented freshman Tyrone Swoopes makes a case to not be redshirted as a wildcat/change up QB in situational packages. RS Freshman Connor Brewer decides to transfer to Arizona.

Aggieland is the setting of a perfect storm that had to occur for Johnathan Manziel to become Johnny Football.

So that’s what the future would hold up until now. I posit that Johnny would have been a career back up to David Ash and would have been given the opportunity to compete for a starting job with phenom Tyrone Swoopes following Ash’s departure in 2015. I think it’s very possible that Johnny transfers at some point, but the wild card there is how much he enjoys Austin and being at UT. But I don’t think it’s unfair to say that despite his talent, he’d be a back-up for a long stretch of time under Mack Brown before being allowed to really “compete” for a job. And even then, knowing what we know, it wouldn’t have shocked me to see Mack go with Swoopes over Johnny.

Aggieland is the setting of a perfect storm that had to occur for Johnathan Manziel to become Johnny Football. The move to the SEC, new head coach Kevin Sumlin, young offensive coordinator Kliff Kingsbury... everyone was getting a fresh start. There was no modus operandi with the program and everything was a wide open competition. Johnny would not have been part of an open competition on the 40 Acres until his senior year.

I do think Johnny would have made a helluva safety, but the horns needed depth at QB in 2011 following Connor Wood’s transfer to Colorado.

The big question is, would Johnny’s lifestyle have been any different living in Austin? Probably not. He’d probably go out just as much and party just as hard. But he’d be doing it as a back-up QB as opposed to a starter and reigning Heisman Trophy winner. He might have 7,000 Twitter followers instead of the 430,000 he has right now. The Johnny Football persona would have never taken on a life of its own… for better or worse.

So there you have it. A realistic (at least I think so) look into the possible life of Johnathan Manziel as a student-athlete at the University of Texas. As always, comments and criticisms are welcome.