Another chapter in our book of bizzarro college football history. This week we look at one of A&M's more memorable losses.

Share All sharing options for: This Week's Hypothetical--A&M vs. OU '00

I know this has been a tough few weeks for Aggie Football fans. I apologize but this weekly hypothetical won’t make you feel any better. But hey, I’ll include videos and maybe it will make this easier to read? Maybe?

November 11, 2000 was the date of one of the more painful losses in my time at A&M. I had gotten my Aggie ring the day before, and I was fired up for us to take on the #1 ranked Oklahoma Sooners at Kyle Field. The entire week before had been spent setting up "12th man day" where we were selling 12th man towels for a dollar…because this game was huge. Absolutely huge.

It wasn’t just the fact that OU was #1 in the country, it was really about the fact that the year before A&M took on first year head coach Bob Stoops’ team in Norman and lost. Bad. Bob hired this evil genius offensive coordinator named Mike Leach, and they just kicked our ass up and down the field resulting in a final score of 51-6. If you’re interested in seeing the lowlights of that game, here’s a video...which really should be considered NSFW.

So with revenge on our minds, So that 2000 game was big. We were 7-2 going into that game, and feeling really good about our chances to win. And to our credit, good things happened in that game. We were up at the half, and up 24-13 going into the 4th. That game was full of memorable moments…one of which was Ja’mar Toombs dragging half the OU defense into the end zone

Again, lots of great moments. But (and you know what’s coming up) we also had one of the worst moments of my Aggie football fandom. Up 31-28 with 7 minutes left in the 4th, Torrance Marshall picks off Mark Farris, and runs it in 40 some odd yards into the endzone.

And yes, I know Farris was blocked in the back on that play. Inconsequential. It was a kick to the balls and a terrible terrible loss.

So I decided to think about what life would have been like had we won that game…because for all intents and purposes we would have knocked OU out of the national title picture. It was a three horse team for the national title that year between Miami, Florida State, and OU. Miami had one loss (to #15 Washington) early in the season, Florida State had 1 loss (to #7 Miami), and OU would have had one loss to #23 A&M. While not a guarantee, it certainly stands to reason that OU would have likely dropped to #3 in the final BCS standings.

The A&M side doesn’t really change much. We would have still gotten beaten (badly) by the horns, and probably still would have lost that heartbreaker of a snowbowl game against Miss State.

But the OU side of the story would have been interesting. How different would the current narrative of college football be if  Bob Stoops didn’t have a national title to his name? I don’t know a ton about OU football, so I posed this question to our sooner friend at Blatant Homerism (http://www.blatanthomerism.com/ and www.twitter.com/BlantantHomerism) to see what he thought. The results were actually pretty darn interesting. Below is some of the text of our conversation:

stringsays: what would the perception be of bob stoops tenure thus far as OU head coach had he not won a national title in '00? would anything be different for the OU program?

Blatant Homerism: Well, for starters, what happens when other opportunities come open? Stoops' name has seemingly come up for open jobs on both the college and pro level every year since he got to OU. If he's a rising coaching star and not a national championship winner, is he more likely to take another gig? Joe Castiglione supposedly talked him out of accepting the Florida job back in 2001 after Steve Spurrier left for the Redskins. Maybe he takes that job?

stringsays: i hadnt even thought about that. had he not won the title in '00, do you think OU would have fought to keep him if florida offers him a healthy bump?

Blatant Homerism: I think they would have made a competitive offer, but do they fight tooth and nail over it? And does Stoops' opinion of the OU job versus the Florida job change? If Bob goes to Florida, Mike Stoops is presumably elevated from defensive coordinator to head coach. 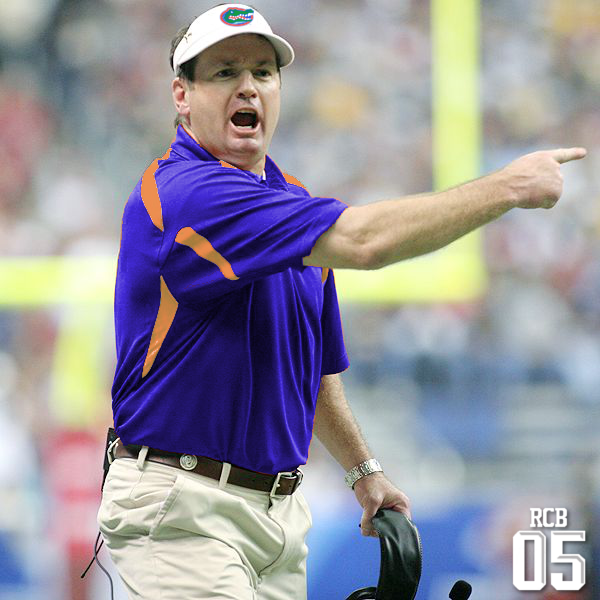 So here’s what we came up with. Florida hires Bob, and Mike gets elevated to head coach. After 5 mediocre years as head coach, Mike gets fired, and Joe Castiglione is left needing to make a homerun hire. He courts Rich Rodriguez (who’s also mulling over a job offer from Alabama), but ultimately RichRod turns him down (Alabama hires Nick Saban). After a lengthy search, Oklahoma hires former Louisville coach Bobby Petrino.

Petrino leads OU to BCS bowl games (no national championships) and several victories over Mack Brown’s longhorns, until an unfortunate motorcycle incident involving a University of Oklahoma female colleague leaves him at odds with Castiglione. Petrino attempts to cover up his bad behavior, but eventually has to come clean. Castiglione fires Petrino in April of 2012 and elevates defensive coordinator Paul Haynes (recently hired from Ohio State) to the head coaching position. 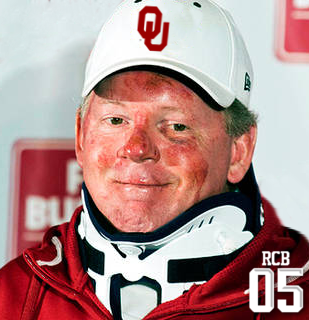 So let’s look at the other coaching dominoes to fall:

Notre Dame: hires Urban Meyer instead of Charlie Weis in 2005

Arkansas: hires Auburn defensive coordinator Will Muschamp after Jim Grobe turns down the position at the 11th hour

So there you go. Another alternative view into what could have been. As always comments and criticisms are welcome!