We were able to take an early look at the Johnny Manziel article, "Who is Johnny Football", in the September issue of Texas Monthly that hits shelves next week and subscriber mailboxes this Friday. The staff is letting us run with a long excerpt and behind-the-scenes photo.

Share All sharing options for: The Texas Monthly Manziel Article - Our Sneak Peek

Everyone is experiencing some form of Johnny Manziel fatigue by this point in time. If you aren't, well then you are one hell of a trooper, my friend. Seriously, is there a facet of Manziel's story that we haven't seen yet? Off-season jet setting, frat parties, golf club throwing? Check, check, and check. Hot model girlfriend, NCAA investigations, a family history that's likely to blow your mind? Yep, all checks there too. This should not be shocking to anyone. Johnny Manziel has reached a level of stardom in collegiate sports that nobody has ever seen and may never see again. Johnny has certainly brought plenty of media attention on himself, Autograph Gate included. With so many media outlets writing about the same Johnny Football topics ad nauseum, sports fans are starting to voice their disinterest in hearing about the returning Heisman Trophy winner.

Why Texas Monthly Opted for Manziel 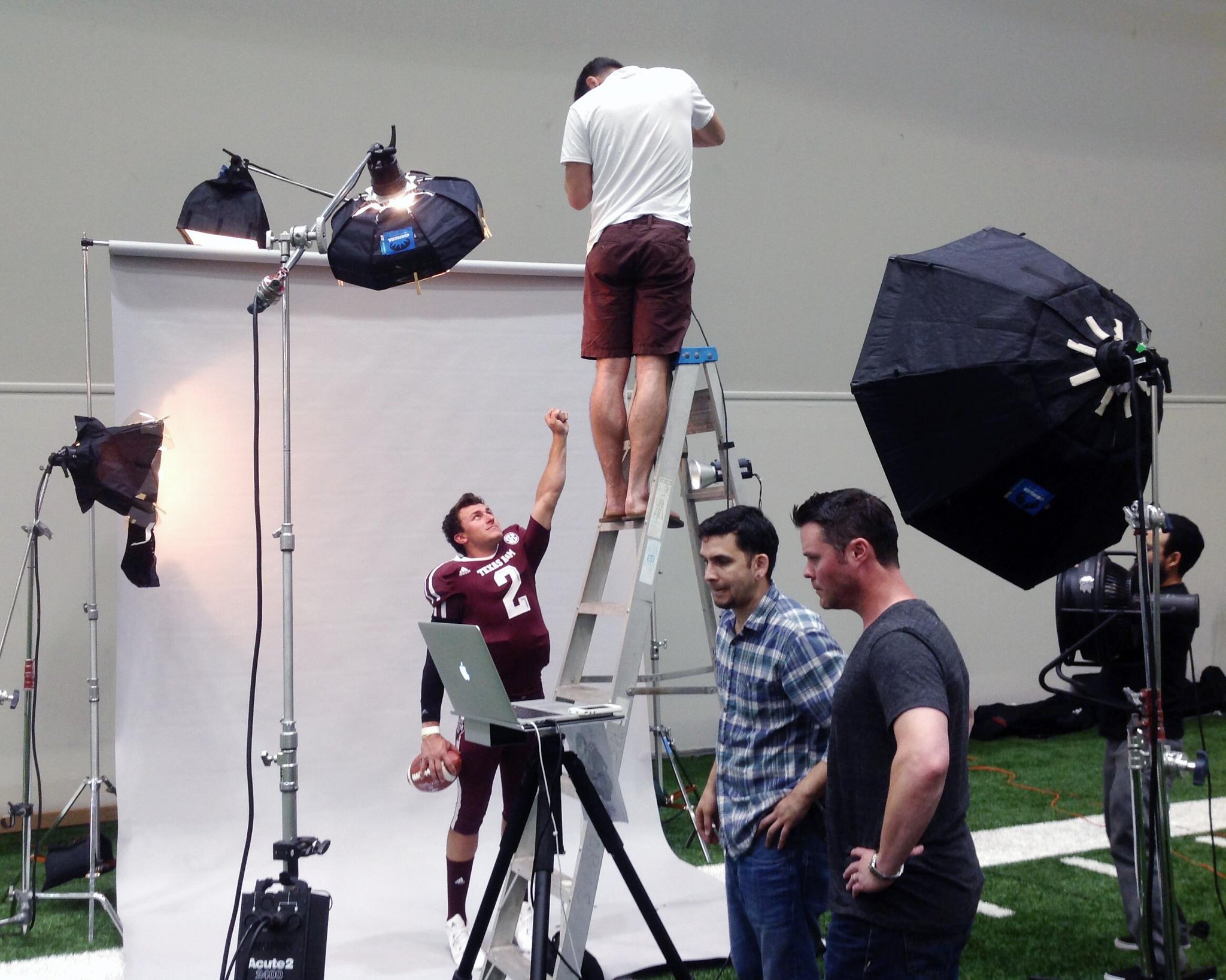 "Stories about his off-field exploits are as unstoppable as he himself is on the field. He has a knack for getting into trouble and narrowly escaping, only to find himself in another fix, which he somehow wriggles out of, only to get tangled up again, and so on. His greatest strength is also his greatest weakness."

Early yesterday, the social media team at Texas Monthly revealed the cover of the September issue of the magazine. As you can imagine, there was no shortage of backlash as the image of Johnny Manziel as a superhero blasting off from Kyle Field circulated the internet. Within an hour of posting only the cover photo, the Texas Monthly Twitter account was accused of showing favoritism towards A&M (deliberate pause), putting a poor role model on a pedestal, and blindly jumping on the Manziel bandwagon. Naturally, you can imagine the majority of these comments were hip-fired towards Texas Monthly without reading Jake Silverstein's piece stating this decision was made back in December. Jake's insight into the thought process of the editorial team at Texas Monthly was refreshing. Shots are fired where they need to be fired and perspective is provided to force reflection. If this was an indication to what the entire article had in store for us, it definitely had my attention.

Thanks to the team over at Texas Monthly, we were able to get a look at the entire article (and artwork, which I'm a huge fan of, by the way) before the article is released online or hits magazine racks. The article, "Who is Johnny Football" by S.C. Gwynne is great. You can insert your own superlatives, but the article is simply great. It gives readers a look at the entire picture surrounding Manziel and his rise from Texas Hill Country legend to the biggest collegiate sports star in the world. We know about the temper and dark side. We know about the family. We all know about Mack Brown snubbing Manziel from playing QB, but was there another D1 coach who didn't think the reigning Heisman winner was worthy of an offer at all? What we haven't seen is the story being told in a way that ties everything together to paint a picture of Johnny Manziel for who he really is. Who is he? You'll have to read the article and form your own opinion. The 17 page article (including the artwork) is filled with anecdotes from coaches, players, and friends who have seen what makes Johnny the person and the athlete that he is; both the good and the bad. The official street date for the September issue is August 21st, but we'll tease you with this excerpt from Texas Monthly.

To many people, Manziel’s Heisman season seemed to come out of nowhere. These people, it must be said, did not live in the Hill Country or neighboring San Antonio near the end of the past decade. Those who did got their first look at Manziel’s abilities on the night of September 26, 2008, when the Fighting Antlers of Tivy High took on the Chargers of Boerne-Champion High. Manziel was a sophomore who had recently won the varsity quarterback job. The Chargers were undefeated, ranked fifth in the region, and had held their previous opponents to 13 points or less per game. To the amazement of the crowd, the slender, five-foot-ten-inch Manziel ripped through Boerne-Champion’s defense as though it did not exist. He threw for 232 yards and three touchdowns and rushed for another 143 yards in a 50–20 rout. In the third quarter he cut loose on a 69-yard touchdown run, only to have it called back by penalties that moved his team back 20 yards. On the next play he sprinted 89 yards for a touchdown.

Though he soon piled up record numbers— the likes of which had never been seen at Tivy High—and as a junior led his team to the state 4A semifinals, it was in his senior year that his performance went from merely phenomenal to otherworldly. That season he personally accounted for 5,276 yards of total offense and 75 touchdowns. He averaged 440 yards per game. He was third in the nation in total offense. He was named a Parade All-American and the National High School Coaches Association Senior Athlete of the Year. He put up these numbers even though in six blowout wins he barely played in the second half. He also did it with a team that, compared with many of its opponents, was almost ludicrously undersized, fielding 180-pound linemen against players who routinely outweighed them by 50 or more pounds.Nowhere was Tivy’s size and talent disadvantage more apparent than in its games against 5A powerhouses Madison High, from San Antonio, and Steele High, from Cibolo, teams that were loaded with Division I–bound players. Against the area’s number-one- ranked Madison, Manziel, running Tivy’s trademark wide-open spread offense, put up even more-astonishing numbers than usual, completing 41 of a state-record 75 attempts for 503 yards and 4 touchdowns in a 39–34 victory. The following week Tivy took on eventual 5A state champion Steele, which featured All-American, All-State, and All-District players and one of the nation’s top running backs, Malcolm Brown (now a starter for the University of Texas). Before a screaming, delirious hometown crowd in Kerrville, Manziel dueled Brown, while Tivy’s undersized team played, as one of the players put it, "out of their shoes." Brown lived up to the All-American hype, running for 354 yards and 4 touchdowns. Manziel, meanwhile, had one of the best nights in his career, throwing for 423 yards and 6 touchdowns and rushing for 129 yards and another 2 touchdowns in a thrilling 54–45 victory.But perhaps Manziel’s greatest achievement as a senior came in two heartbreaking losses—Tivy’s only ones that year—to Lake Travis High School,one of the top high school football teams in the nation, which was in the middle of its unprecedented run of five straight 4A state championships. In two epic battles, Manziel and Tivy scored more points than any team had ever scored on Travis dur- ing its run, losing 37–33 in a non-district game and 48–42 in the state playoffs. The latter was Manziel’s heroic, bittersweet farewell to Tivy High. "We played against tremendous odds through Johnny’s whole career at Tivy," says Julius "Juju" Scott, who was the offensive coordinator for Tivy during Manziel’s years there. "People think he played a miraculous game against Alabama, but in Kerrville I saw him do that with a lot less talent around him. Nobody scored that many points on Travis. Beating the Steele Knights? Come on. They’ve got sixteen Division I players. We had one. It shouldn’t be close."How did Manziel and his fellow Antlers pull this off? He was a singularly talented quarterback, of course, but the team’s success was also due, more than a little, to love and brotherhood. At weekly devotionals, the entire team, with several coaches, would pack into one room at a local church and shut the door. Though the meetings were optional, everyone attended. "At the beginning of the meeting, they would show a highlight video of the week before," says Manziel, "and after that, anybody could say anything, and it would never, ever get brought out of that room. Sometimes I would tell a funny story, make people laugh. Sometimes I would come up and have a Bible verse to read—David and Goliath, just whatever it was. Afterward Coach Scott would say a prayer, and then you would hug every person in the room before you left the building, coaches too. There was not a person there that wouldn’t hug any guy on that team. It was awesome. So rare. People wonder why Tivy was so good. We were all brothers. We loved each other."

After the game, his mother thanked Manziel with tears in her eyes. It is one of Manziel’s best high school memories.
As a leader, Manziel could be hard on his teammates, but he had a softer touch when it came to the weaker players. During the team’s final home game, he told Scott that he wanted to make sure that Robert Martinez, a popular senior receiver who had never played, scored a touchdown. Scott approved and put Martinez on the field, and on the next play Manziel deliberately slid down at the 1-yard line to set it up. On the following play he lined up in the shotgun, gave the ball to Martinez, then grabbed him by the jersey and half-carried him into the end zone. Martinez, who was hoisted onto his teammates’ shoulders, was thrilled. After the game, his mother thanked Manziel with tears in her eyes. It is one of Manziel’s best high school memories.In his three years as a varsity quarterback, Manziel had become a certified Hill Country legend. People drove hundreds of miles to see him. He packed stadiums all over the district. Kerrville would come to an abrupt standstill during every home game. His wild, off-the- cuff plays, often drawn in the dirt or the air by Scott in the moments before the snap, made him a YouTube hero, which drew people from even greater distances. In spite of all this, he managed to lead the normal life of a Kerrville kid. "We were just constantly outdoors," says Manziel’s close friend Nate Fitch (who would follow him to A&M and later become his personal assistant). "That’s what you do here. Everybody hunts and fishes, and sports occupied the time between."Manziel also found time to get into a little trouble. One night he went to Walmart to buy a phone charger. While he was there a security guard smelled alcohol on his breath and called the police, and Manziel was taken to jail. His father, furious at him, refused to pay his fine and even suggested that the judge increase his community service hours from ten to twenty. Paul also sold the new car he had given Johnny on the condition that he stay away from alcohol. In its place he gave his son an old, rattletrap pickup truck to drive to school."Johnny Manziel is a red-blooded American young man," says Scott, with whom Manziel still has a close relationship. "He is not superhuman, he is not a saint, he does not have a halo. He is subject to the temptations everyone else is. But he is a great person. He has a genuine love for his teammates and coaches. I have never spoken to him on the phone when he didn’t end the conversation saying, ‘I love you, Coach.’ He has never not said it."