"What if?" Wednesday: A college football hypothetical

We still have about 8 long, lonely weeks until the college football season begins, so I thought I’d provide fodder for conversation in a weekly column called "What If Wednesday." The premise of the column is pretty simple—take something that happened (or didn't) and flip it around to discuss what might have been. These hypotheticals will often, but not always, involve Aggie Football. Consider this feature an examination of the College Football butterfly effect.

Share All sharing options for: "What if?" Wednesday: A college football hypothetical

What if Rich Rodriguez had accepted the Alabama job offer?

Alabama fired Mike Shula in November of 2006 after three years of .500ish football. They set their sights on then West Virginia head coach Rich Rodriguez and went as far as offering him the position. Rich Rod turned down the position in December 2006, and we’re all aware of what happened after that. Had Rich Rod accepted the position, I propose the following alternative reality for the past 7 years:

Rich Rodriguez struggles at Alabama as he did at Michigan. Longtime defensive coordinator Jeff Casteel decides to stay at West Virginia (as he did when RichRod took the Michigan job), and Rich Rodriguez has difficulty ingraining himself into the Alabama football culture—he’s always looked at as an outsider (strongly recommend everyone reading the book "Three and Out: Rich Rodriguez and the Michigan Wolverines in the Crucible of College Football" as a good overview of what happened at Michigan). After three years of mediocre football, Mal Moore (RIP) fires Rich Rodriguez and hires TCU head coach Gary Patterson in January 2011. 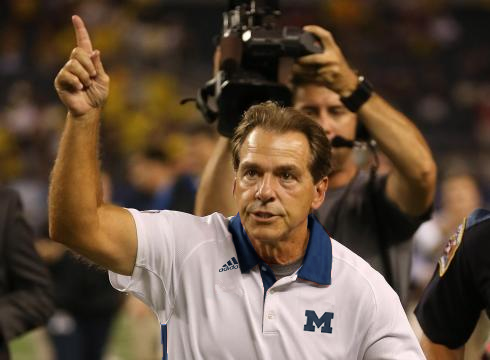 Lloyd Carr announces his retirement in November 2007 after a 9-4 season (including a season opening loss to Appalachian State). Michigan immediately goes after one of their own, Les Miles, but is ultimately rebuffed. While in preliminary negotiations with Greg Schiano of Rutgers, Michigan receives a phone call from Jimmy Sexton, who represents Nick Saban. Jimmy describes Nick’s growing discontentment with the NFL and indicates that, for the right price, Nick would be willing to come back to the state of Michigan. In January 2008, Nick Saban is announced as the head coach of the Michigan Wolverines.

Mack Brown leads the Texas Longhorns to the 2010 BCS National Title game, where they play the undefeated #2 Florida Gators. Tebow vs. Colt. No fluke shoulder injury in this game, and the Longhorns beat the Gators 28-24 to win their second national title under Mack Brown. Mack Brown retires in late January, and head-coach-in-waiting Will Muschamp takes over as head coach of the Texas Longhorns. Longtime offensive coordinator Greg Davis also retires and is replaced by Major Applewhite. Muschamp brings in Dan Quinn as defensive coordinator.

After an 8-5 2010 season, Urban Meyer steps down due to family issues. Jeremy Foley immediately reaches out to Oklahoma’s Bob Stoops and offers him a 5-year 40 million dollar contract, but after much deliberation, Bob decides to stay at Oklahoma. Foley immediately calls Dan Mullen, head coach at Mississippi State who accepts the job on the spot.

Mississippi State undergoes a lengthy coaching search and ultimately has two finalists for the position. They end up offering the job to Auburn offensive coordinator Gus Malzahn over Maryland OC James Franklin (who ends up taking the Vanderbilt job).

So there you have it. The domino effect of RichRod actually taking the Bama job (not to mention the loss of three national titles). Please use the comments section below to le me know where I messed up or to take the hypothetical even further.